Provide your feedback on the Vision Zero Draft Plan

The City of Minneapolis released a draft of their Vision Zero Action Plan on September 17th. This plan will guide traffic safety work on streets in Minneapolis over the next three years.

What is Vision Zero?

Vision Zero is an international effort to eliminate traffic related deaths and serious injuries. Minneapolis became a Vision Zero city in September 2017. At that time, the City Council committed to achieving their goal to reach Vision Zero within ten years. Now, the City is in the process of putting together a three year action plan where they will implement projects to eliminate traffic deaths and serious injuries in Minneapolis.

You can learn more about the Vision Zero Action Plan in our blog post about the plan launch.

Why is the Vision Zero Action Plan important?

Everyone deserves safe, comfortable, easy to use streets in our city, no matter how they choose to get around. Folks who bike, walk, and roll make up a disproportionate amount of deaths and serious injuries on our streets. This is not acceptable. Vision Zero is a chance for us to prevent these deaths and injuries from happening through serious infrastructure investment in making our streets better for everyone.

Yet there’s no guarantee the City’s Vision Zero commitment will focus on the kind of infrastructure investments and changes we know our city needs to be an easy and comfortable place to bike, walk, and roll. In other cities in the United States, Vision Zero measures have included increased traffic enforcement with mixed results. In many cases, this increased enforcement amplified racial disparities in the communities they were hoping to make safer. That’s why we don’t think traffic enforcement should be part of Vision Zero in Minneapolis.

Read more about why we don’t support traffic enforcement and answers to common questions about enforcement on our blog.

What’s going on in the Draft Vision Zero Action Plan?

There’s a lot we like about the Draft Plan. The Plan puts forward infrastructure improvements on the most dangerous streets in Minneapolis. These streets make up 114 miles of streets in Minneapolis and are called the high injury network. The infrastructure improvements put forward are data-driven. They’re focused on preventing drivers from behaving in ways that are dangerous to people biking, walking, and rolling, as well as other drivers.

We commend the City for releasing comprehensive data that finds deep racial disparities in who is affected by traffic crashes in our city. Unsafe streets are concentrated in low income communities of color. It is good to see a plan to make these streets better for all road users. 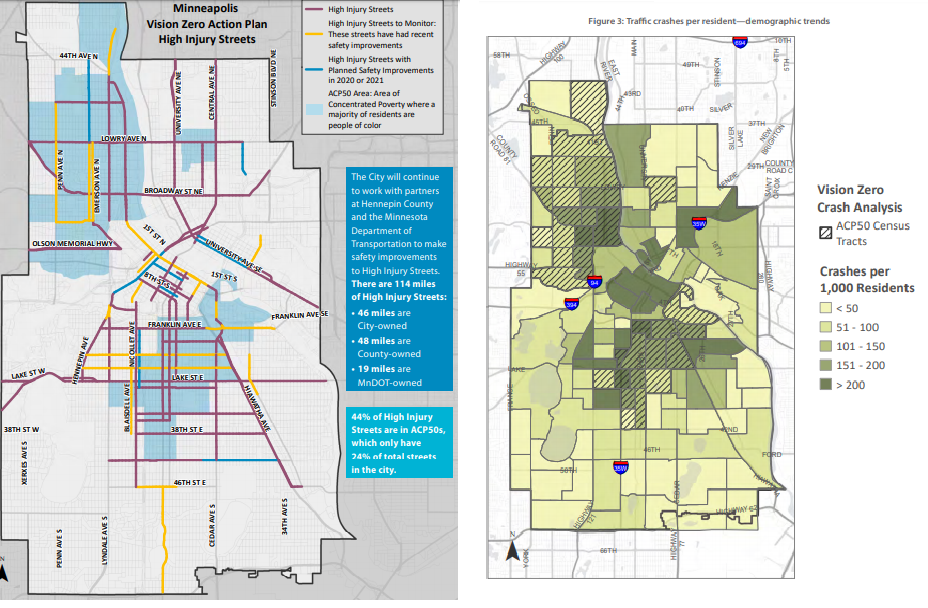 There are also parts of the Draft Plan that concern us.

While we’re excited the plan has a focus on improving street design, the City only owns 40% of the streets in the high injury network. That means that in order to make changes on the other 60% of streets, the City needs approval from Hennepin County or MnDOT. We need to get a commitment from the County and MnDOT that they will treat improving these streets with the same level of urgency as the City.

We’re also worried about how decisions will be made at the City level. We’d like to see a commitment that every transportation project that goes through the City of Minneapolis will be viewed through a Vision Zero lens. We also want to be sure the upcoming Transportation Action Plan and updated street design guide incorporate the recommendations in Vision Zero.

By the looks of the Mayor’s draft budget, enforcement comes first.

The Draft Plan calls for “evaluating the recreation of the traffic enforcement unit” in Minneapolis. Yet, the Mayor’s draft budget already calls for $562,000 for a traffic enforcement unit in 2020. At the same time, there’s only $100,000 in the Mayor’s 2020 budget for all of Vision Zero. The values reflected in the Mayor’s budget to not line up with the Vision Zero action plan. Instead, the budget gets ahead of the Plan. The budget sets priorities for Vision Zero strategy before the Plan is even approved.

The Draft Plan also recommends evaluation “ensuring that enforcement does not disproportionately fall on people of color or people with low incomes." Yet, there’s not a plan for how this will happen. There isn’t any evidence to support that the traffic enforcement unit, or future automated enforcement, will be equitable. And, there’s a lot of evidence that it won’t be. As we stated before, the City needs to remove enforcement strategies from the Vision Zero Action Plan.

Finally, there are three specific things we think are missing from the Draft Plan.

First, We’d like a clear acknowledgement in the Plan that the City will prioritize human life over delay for cars. For example, we want pedestrian beg buttons out of our city. Every single signal should include a pedestrian phase that gives folks walking and rolling enough time to get across the street.

Second, any plan about safety on our streets must acknowledge that the rise in larger personal vehicles is linked to a nationwide rise in pedestrian deaths. The Vision Zero Plan needs to put forward strategies to disincentive using especially dangerous cars like SUVs and trucks on our streets.

Lastly, we’d like to see a discussion of how much these strategies will cost. Knowing what it takes to carry out this plan well will help City elected officials make reasoned decisions on funding the Vision Zero program.

How can I get involved?

Now is the time to provide your feedback on the Draft Vision Zero Action Plan. Comments on the plan are due on October 16th--just barely a month after the City released the plan. This isn’t a lot of time to read the plan, analyze it, and provide feedback. Folks can read the plan and submit comments online on the Vision Zero Minneapolis website.

The City will host two open houses for folks to provide feedback on the plan:

You can also help by asking your City Council Member for additional funding for Vision Zero infrastructure improvements in the Mayor’s budget. You can find out which City Council Member represents you using this tool. Check out these tips for e-mailing or writing, calling, and setting up a meeting with your Council Member if you’d like a little help getting started.