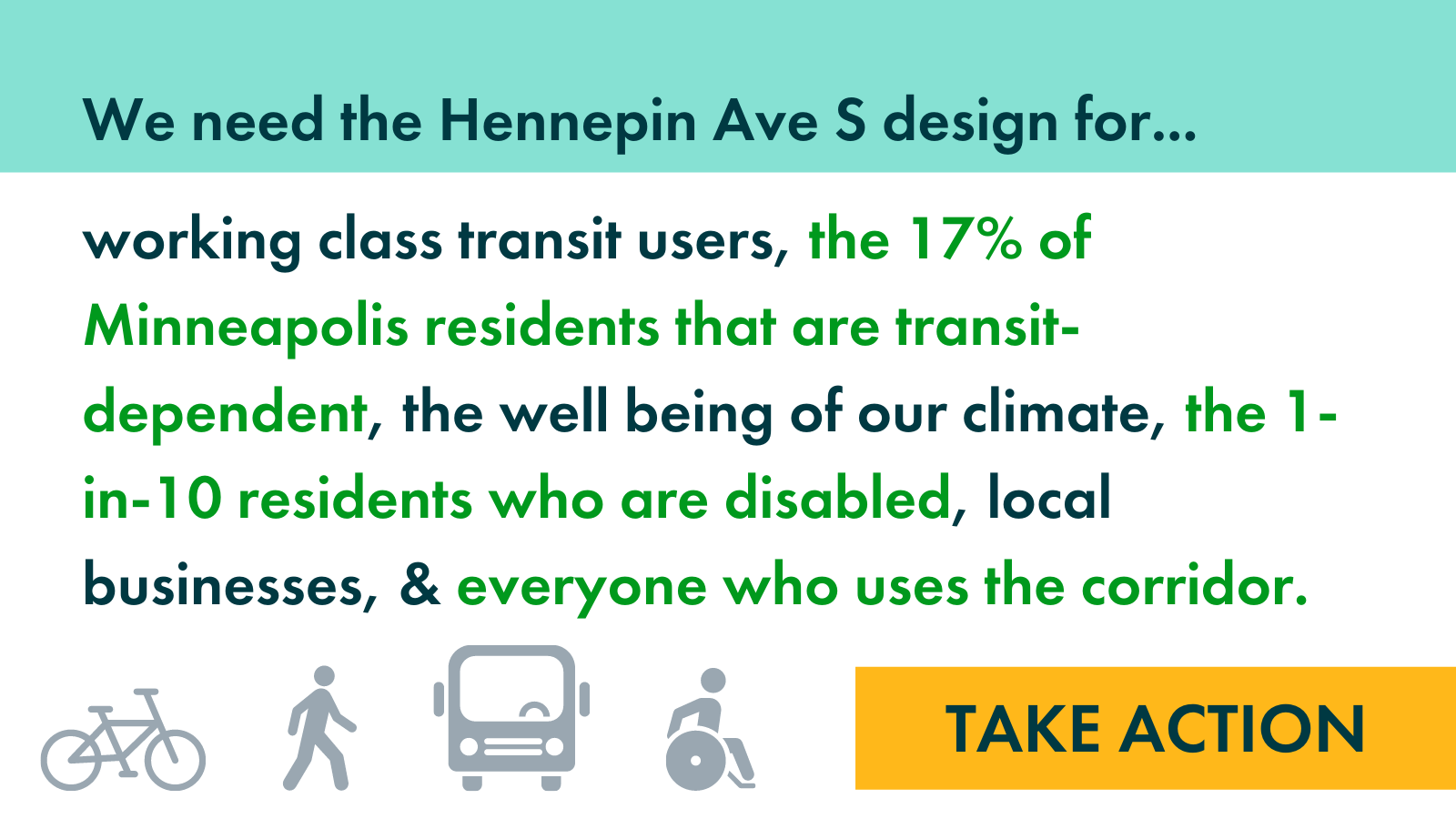 Hennepin Ave S will be reconstructed in 2026. We're organizing to ensure that people biking, walking, and rolling are prioritized in the design.

After months of delay, Public Works is finally bringing forward the final layout for approval by the Minneapolis City Council. Unfortunately the original plan has been changed and 24/7 bus lanes will no longer be included when the new street opens in 2026.

Public Works may claim that this layout is the same as the original plan, however that is not true. The current plan would delay the implementation of 24/7 bus lanes until an unspecified date in the future. There is no accountability and no reason to believe that this will happen anytime soon. This is unacceptable. These bus lanes are urgently needed for the thousands who depend on transit to access their daily needs. 24/7 bus lanes must be included on day 1 of the project's opening.

It has been revealed that research supporting dedicated bus lanes has been withheld during City Council meetings. This represents a clear lack of transparency and accountability from the Public Works Director and Mayor. The need for 24/7 lanes should not be undermined.

The Minneapolis City Council passed a layout amendment to include 24/7 Bus Lanes on Day 1, but Mayor Frey vetoed the action. City Council did not override the veto despite a majority of council members voting to do so. The Hennepin Ave S reconstruction now returns to committee for review. Disappointingly, Councilmembers Chughtai and Johnson moved forward with a compromise that would delays 24/7 bus lanes for several years.

This compromise is at the expense of people who rely on transit the most. While this is a setback, we will continue organizing for improvements on Hennepin as the project continues.

Read the letter from Minnesota Senators and Legislators

With 24/7 bus lanes removed from the Hennepin Ave S design, transit riders will be left behind. Agencies including Metro Transit, the Metropolitan Council, and the City have described the importance of these lanes in meeting our climate and equity goals. We're invited key decision makers to canvass with us and hear directly from the people most impacted by this project.

Find contact information below. This table is best viewed on desktops and larger screens.