Olson Memorial Highway, or Highway 55, is an urban highway running through North Minneapolis. It is one of many urban highways that divides communities, pollutes the environment, and creates a hazardous environment for nearby residents. Olson Memorial Highway has a uniquely devastating history, as the construction of the highway was at the expense of a thriving Black and Jewish cultural corridor along 6th Avenue N that was home to dozens of homes, shops, businesses, and music venues.

Some of these concerns were to be addressed with the construction of the Blue Line Light Rail Extension on Olson Memorial Highway. The light rail project was set to bring modest but much-needed traffic safety improvements as well as high-quality public transit service. However, after years of planning and development, the Metropolitan Council re-routed the Blue Line Extension and planned safety and transit improvements disappeared. Harrison and other Near North neighborhoods are now left to deal with the negative impacts of this broken promise.

Our Streets Minneapolis and the Harrison Neighborhood Association are leading a campaign to address the historic and ongoing harms of Olson Memorial Highway and reclaim the highway land to reconstruct 6th Avenue N.

We will continue organizing until the Minnesota Department of Transportation, the Minneapolis Public Housing Authority, the Metropolitan Council, Hennepin County and relevant elected officials and partners give a public commitment to:

The Minnesota Department of Transportation, City of Minneapolis, and Hennepin County have launched a project that falls well short of the community’s demands and expectations for safety improvements on Olson Memorial Highway, and includes no public commitment to Bring Back 6th! We're organizing for a full project timeline, inclusion of Phase 1 improvements, and for improvements to be made permanent. Read a comparison of the community's demands vs MnDOT's proposal here.

The History of 6th Ave North

There land where Olson Memorial Highway lies today was once a vibrant, diverse business corridor along 6th Avenue North. The community had access to grocery stores, bakeries, entertainment, shopping, and more. Its numerous bars and music venues formed the heart of the Twin Cities jazz community. The area was also a cornerstone of the Jewish community in Minneapolis. By the end of the 1930s, hundreds of businesses and homes along the route were completely destroyed and replaced with a wide highway cutting through the neighborhoods.

Learn more about the history of 6th Avenue North


A Vision for the Future

Phase 1: Immediate improvements to the Olson Memorial Highway Corridor by 2023

Every year, people are killed and seriously injured in crashes on Olson Memorial Highway. The wide crossing distances and high traffic speeds make crossing the highway unpleasant and unsafe. The current infrastructure presents urgent concerns that need to be addressed immediately.

We calling on the Minnesota Department of Transportation to commit to: 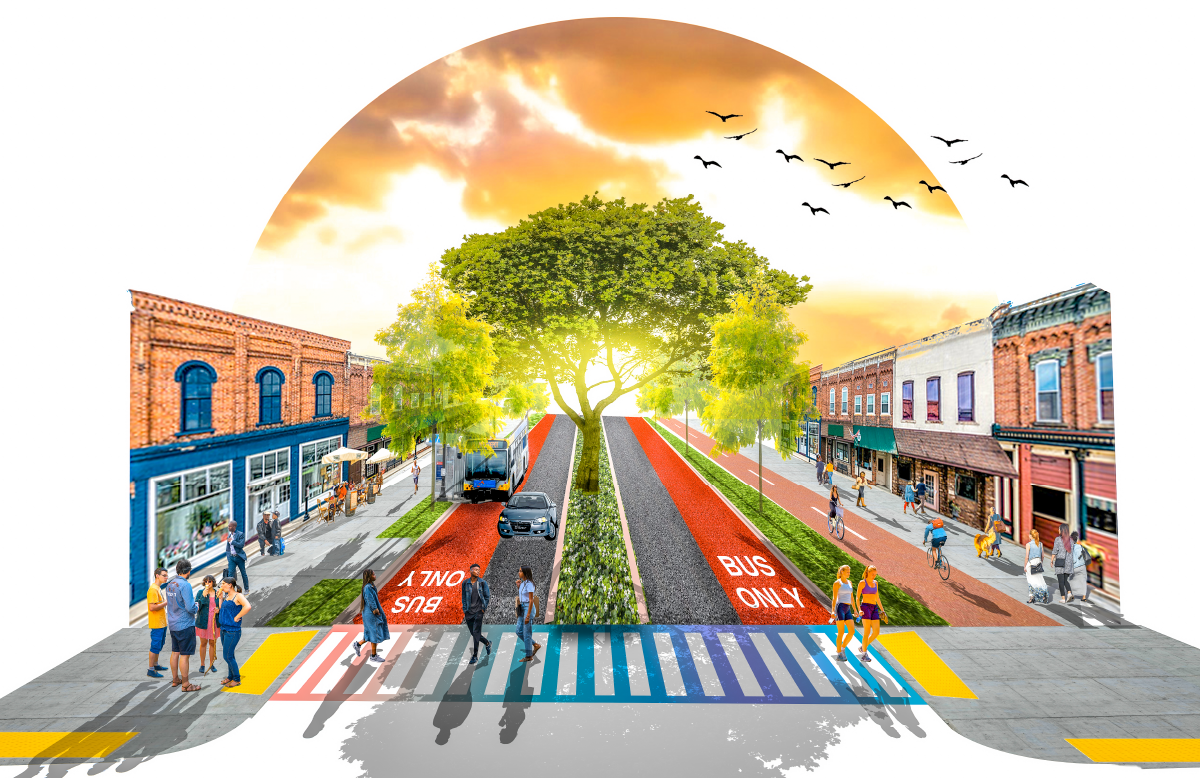 Phase 2: Replace the highway with 6th Avenue North starting in 2026

This phase focuses on a long-term vision to remove the highway and restore a walkable main street for Near North communities. Any and all of the adjoining parcels of publicly owned land that are included in the highway removal process should remain publicly owned and be placed in a publicly held land trust to ensure that new development benefits the existing community.
We calling on the Minnesota Department of Transportation to commit to:

As part of phase 2, we are also calling on Hennepin County, City of Minneapolis, Minneapolis Public Housing Authority and the Metropolitan Council to:

Harrison and Near North were once centered around the vibrant 6th Avenue North. Today, the community lacks walkable access to grocery stores and local businesses, communal spaces, quality transit, and other core amenities. Instead of a highway, we could have…

The Highway Continues to Harm Near North Communities

Today, Olson Memorial Highway is a 6-lane wide highway that divides Near North Minneapolis. The speed limit on the corridor is 40 MPH, crossing locations are poorly regulated, and is identified as a high injury crash street. In fact, the intersection of Lyndale Ave N and Olson has the highest crash rate in all of Minneapolis. This highway fails to serve people who do not drive. Additionally, people living nearby face some of the worst air quality in the Twin Cities area.

Read about the harms

Government agencies have created planning processes that overlook the voices of our immigrant, refugee, low-wealth and BIPOC communities and cater to the economic interests of outside developers and affluent residents. These intentional choices about transportation projects have brought destruction and displacement to our communities — over and over again.

As we begin to engage in conversations around removing Olson Memorial Highway, we see the same entrenched processes and political interests once again threatening the families and small business owners who are the fabric of our beloved neighborhoods. Our vision is a community-centered planning process that commits to a racial justice framework and restorative approach that intentionally directs economic, social and environmental benefits of highway removal to immigrant/refugee, low-wealth and BIPOC communities along the project corridor — and beyond. We demand that changes on Olson Memorial Highway intentionally seek to repair historic harms and invest in the well-being of our neighborhoods.

View the full set of benchmarks

Your advocacy is working! Bring Back 6th started as just an idea. Now, it is a full fledged community movement and decision makers are listening! Thanks to community support, MnDOT has committed to a "transformative project" for Olson Memorial Highway in 2027. Click here to view our current canvassing materials.

So far, we have knocked 6,500 doors in North Minneapolis for Bring Back 6th. Want to help us reach more people? Consider volunteering or making a gift.


"Is this vision really possible?" Yes!

The Minnesota Department of Transportation has a “Project Demonstration Fund” that would allow them to permanently install Phase 1 safety improvements along Olson Memorial Highway in a matter of months. Additionally, MnDOT has access to funds from the federal infrastructure bill that could be used for an Olson Memorial Highway project. Instead of reconstructing the highway and furthering harm, this money should go towards repairing and reconnecting the Near North community.

"What about traffic impacts?" Studies show that when a highway is removed, much of the traffic disappears as well. Instead, people change their destination, take a different route, or utilize another mode of transportation. This is referred to as traffic evaporation. The changes proposed in Bring Back 6th would only add a couple minutes of driving time. Additionally, suburban commuters would have access to new transit and bike options. From improved health to economic outcomes, the benefits would far outweigh the costs and the community would have an opportunity to sustainably reclaim land and spaces to restore their economic and cultural vibrancy. Would you give up a couple minutes of driving time to help repair the community?

Have other questions? Check out our FAQ!

Donate today to support our organizing efforts and bring this vision to life.