Why we don't support traffic enforcement

This blog post is based in part on a presentation Elissa Schufman & Emily Wade gave at the City of Minneapolis Bicycle Advisory Committee meeting held on June 26th, 2019.

At Our Streets Minneapolis we firmly believe traffic enforcement is not a good strategy to make streets better places to bike, walk, and roll.

We know that this sets us apart from many local and national advocates who believe law enforcement is key to making streets spaces for everyone. Here in Minneapolis, the idea that we need more police enforcing traffic laws is popular in conversations about blocked bike lanes and the City of Minneapolis Vision Zero Action Plan.

Given what’s going on with these conversations in our local community, we wanted to explain why we think traffic enforcement is a bad strategy in a bit more detail. 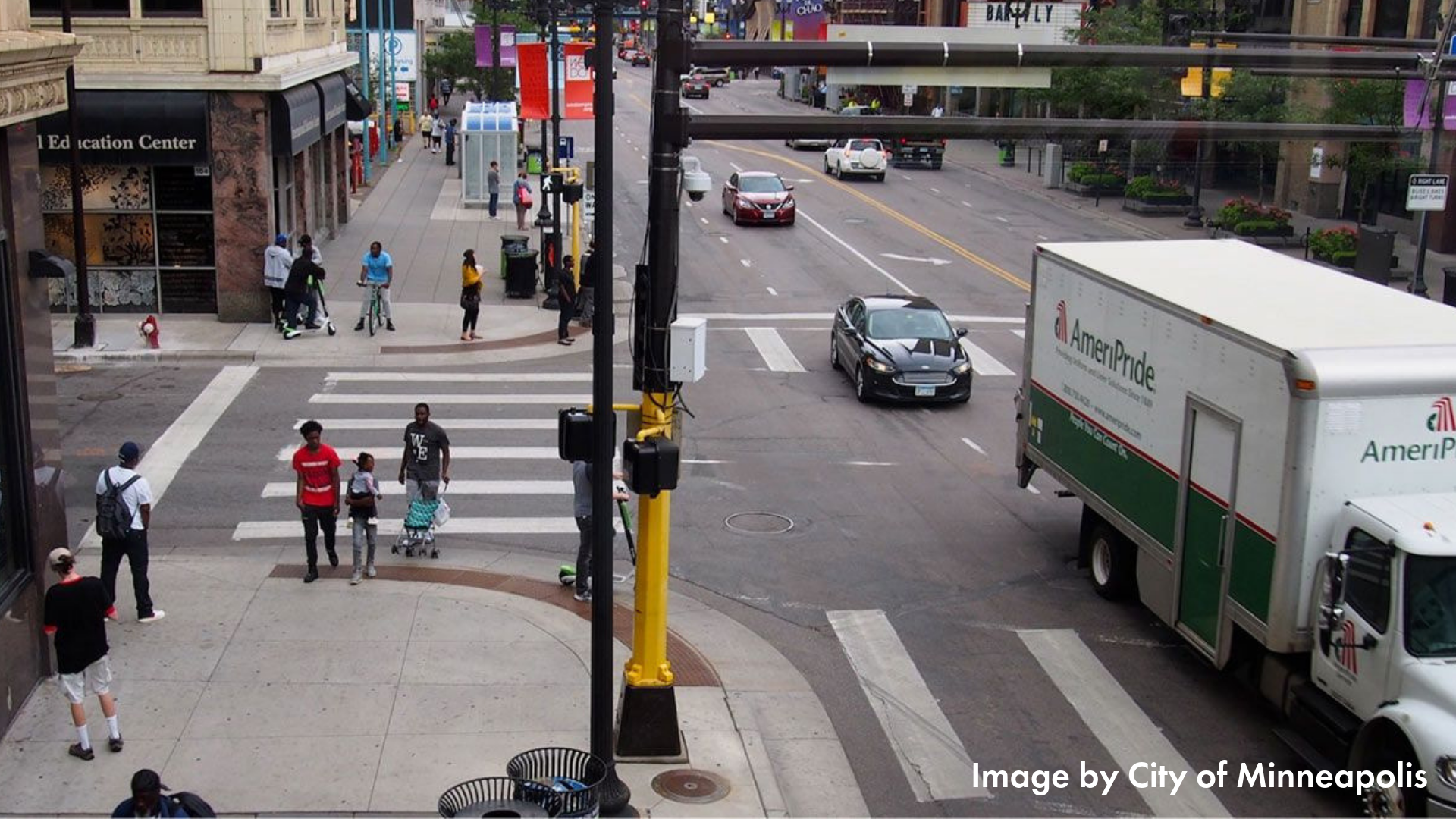 There are two main reasons we think enforcement is a bad strategy:

Let’s take a look at each of these more closely.

In Minneapolis, our local police do not enforce traffic laws in the same way for people of different races. Minneapolis police have skewed interactions with both black folks on bikes and black folks in cars.

A report created by Melody Hoffmann, Ph.D, and Azul Kimecik, MPH, former volunteers for our organization, found that internal Minneapolis Police Department reports suggest black bicyclists face greater threats of police violence than white bicyclists, especially for small infractions like failure to use a light or riding on the sidewalk.

When we pulled data from the Minneapolis Police Department Stop Dashboard, we found that from January 1st to June 25th of this year, 45% of the people stopped for traffic moving violations in our city were black or East African, while 38% were white and 5% were unknown.

After police stopped someone in Minneapolis, sometimes they searched their vehicle. 70% of those searches were performed on black or East African drivers.

Sometimes police searched the driver’s body. 68% of those body searches were performed on black or East African drivers. For reference, black and African American folks make up about 18% of our population in Minneapolis.

From these numbers we can see that Minneapolis has a problem with race and traffic enforcement. Do other cities do any better? Unfortunately, no.

Let’s take a look at two other cities where we could find published data on race and traffic enforcement:

Washington D.C. adopted Vision Zero in 2015. The City went into Vision Zero with black residents making up 70% of traffic related arrests, despite making up less than 50% of the population. Five years later in 2018 data showed drivers in predominantly black neighborhoods were 17 times more likely to receive a moving violation than those in predominantly white neighborhoods. Notably, these disparities exist even though Washington D.C. relies heavily on automated camera enforcement.

Sometimes we hear from folks that the solution to racially biased policing is police reform, not less policing. What that says to us is that folks know there is a problem with the police. But, rather than pressing pause on policing and the harm it causes, they think it would be better to continue with our current levels of enforcement, or even increase them, and write off the disproportionate outcomes as an unfortunate side effect.

At Our Streets Minneapolis, we don’t think that’s good enough. Especially because we know that for black men in our community, being pulled over can be deadly. It was for Philando Castille.

If the racial disparities weren’t enough to oppose enforcement as a strategy--which we think they are--it might help to know that focusing on traffic enforcement doesn’t necessarily translate into better environments for folks to bike, walk, and roll.

Given the discretion police officers have in how they do their jobs, they at times end up handing out more tickets to cyclists for minor infractions rather than ticketing speeding or reckless drivers. And, for people of color, fear of being profiled by police can keep them from riding a bike in the first place.

Fortunately there is a much better way to make our streets better places to bike, walk, and roll: change the streets.

We know that good infrastructure makes a huge difference. Folks tend to drive in the way the built environment around them allows. For example, wider lanes make drivers feel comfortable speeding, so they do. Where there are protected bike lanes, on the other hand, folks driving slow down and everyone benefits.

The report goes on to recommend that local leaders install traffic calming devices, narrow streets, or even just make streets appear narrower so folks driving slow down. When it comes to changing driver behavior, even the police don’t think they’re right for the job.

Infrastructure changes don’t have to be expensive or time consuming, either. The mid block signs that led to success in St. Paul’s Stop for Me Campaign start at only $65. And earlier this summer we saw how quickly work crews can be sent out to add a painted buffer to a bike lane after our community put pressure on the City and County to restore the buffers on Park & Portland.

Don’t get us wrong--we love total street reconstructions and curb protected bikeways. But we don’t have to wait for a full reconstruction every time we want change.

Here’s what we know about traffic enforcement:

But, as far as we know, traffic enforcement has been part of every Vision Zero effort to date.

This gives us a unique opportunity in Minneapolis: we could be the first city to try Vision Zero without enforcement as a strategy. As a city that’s known for innovative approaches, and prides ourselves on creating equitable policies, this is the kind of thing that ought to be right up our alley.

We could show our neighbors and the country that we will not put more resources into a deeply flawed police system. We could take those resources and invest in improving the infrastructure on our streets. We could make big changes to what it’s like to bike, walk, and roll in Minneapolis.

So Minneapolis, let’s do it. Let’s take enforcement out of our Vision Zero Action Plan, and out of our conversations about better streets. Let’s be bold.

Want to learn more? Take a dive into these resources

City and County of San Francisco. Automated Speed Enforcement Survey Findings and Lessons Learned from Around the Country. (November 2015)

Glidden, Elizabeth. Amendments to the City of Minneapolis Code of Ordinances Title 2, Chapter 21. Definitions of equity and racial equity.

The League of American Bicyclists, “The 5 E’s.”

MPD150. Enough is Enough: A 150 Year Performance Review of the Minneapolis Police Department. (2017)

Quintanar, Sarah Marx. “Man vs. Machine: An Investigation of Speeding Ticket Disparities Based on Gender and Race,” Journal of Applied Economics. (May 2017)

Theodore, Nik. “Insecure Communities: Latino Perceptions of Police Involvement in Immigration Enforcement,” Department of Urban Planning and Policy at the University of Illinois at Chicago. (May 2013)

Transportation Alternatives. Death, Danger and Ignoring the Data: How the NYPD is Getting Vision Zero Wrong. (July 2016)