In past years, Our Streets Minneapolis has advocated for and organized communities in support of the Whittier Lyndale Bikeway. The bikeway will create a much-needed connection for people who live, work and go to school in these communities. The City of Minneapolis went through with planning a protected, two-way bikeway between Downtown and 40th Avenue S on 1st Avenue and Blaisdell Avenue. Construction was due to be completed in Summer/Fall of 2021 before Public Works delayed completion until 2022.

While the bikeway portion south of 28th street will be protected by curbed planters, the northern portion only added paint and widely-spaced plastic bollards to deter drivers from entering the bikeway. This design is substandard and puts bikeway users at risk. Public Works justified this decision by citing the upcoming reconstruction of 1st Avenue S that was planned to begin in 2023. This reconstruction project, which includes 1.5 miles of 1st Avenue S from Grant to E Lake, is expected to add a fully protected, off-street bikeway. Unfortunately, Public Works also delayed this project from 2023-2024 to 2024-2025.

Read our blog post "The City of Minneapolis Public Works Department Can and Must Do Better" for more information on the planning process and accountability.

As this letter from the Emerson Dual Language School emphasizes, this bikeway would provide students with essential routes to school. Since there is a national bus driver shortage, many families need to find ways to transport their children themselves. Delaying this project denies the students an easy trip to school and increases the car traffic in the area. We stand in solidarity with the Emerson students and families. 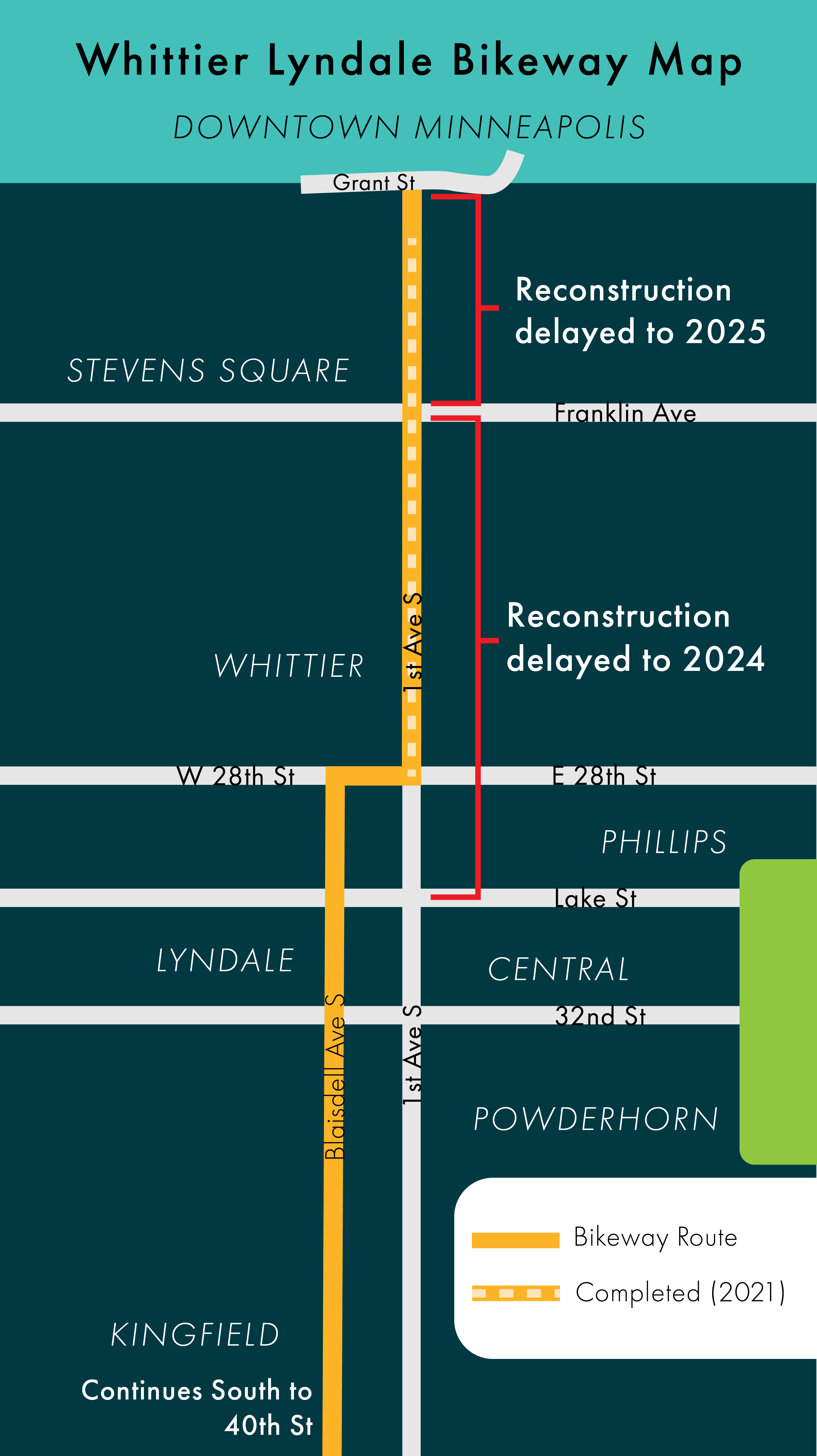 Recently, we received an update from Minneapolis Public Works about both the bikeway completion and the reconstruction timeline for 1st Avenue S:

Staff said that completion of the remaining portion of the Whittier/Lyndale Bikeway (32nd St. to 40th St.) is the first project in queue this construction season and work will begin as soon as it is consistently warm enough to do so. Staff said that they expect to resume construction in early April and complete the project by early June.

While this project never should have been delayed in the first place, we are glad that Public Works has committed to constructing the project as soon as possible, with a clear timeline for completion. Thank you to everyone who emailed Public Works staff about this issue. This commitment is because of your advocacy!

Unfortunately the update from Public Works said that the reconstruction of 1st Avenue S between Lake St. and Grant St. will continue to be delayed until 2024 & 2025. Staff said that the project was delayed last year “to better align with the Nic @ Lake project.”

While the continued delay has likely made a 2023 construction date infeasible, we will continue to push for accountability. The existing conditions on 1st Avenue S are unacceptable. In addition to insufficient protections for the bikeway, the street pavement is severely degraded, making it difficult to walk, roll and bike along and cross the street. The fact that these conditions will remain for another three years is unacceptable. Comfortable access to walking, rolling and biking to daily needs is not a luxury, it is a basic right.

Project engineers, City staff, and elected officials have a duty to serve the people and be transparent on updates that impact communities. Here is what you can do: