Today, transportation in Minneapolis is at a crossroads. There are several encouraging projects in the works. These are backed by strong City goals and policies that aim to reduce carbon emissions, eliminate traffic deaths and make biking, walking, rolling and transit the norm in Minneapolis. However, we are concerned that a pattern of delay, a lack of transparency and an unwillingness to challenge the car-centric status quo within Minneapolis Public Works may prevent us from ultimately achieving the vision for a more equitable, accessible and sustainable transportation system. This blog post is focused on outlining our concerns and providing a blueprint for a path forward.

This month, Our Streets Minneapolis will renew our organizing efforts to push the City of Minneapolis Public Works Department to complete the Whittier/Lyndale Bikeway. This new protected bikeway on 1st Avenue S and Blaisdell Avenue S will create a desperately needed connection between 15th Street in downtown Minneapolis and 40th Street in South Minneapolis.

Unfortunately this project has suffered from delays, a lack of transparency and an underlying deference to the convenience of car drivers. While it’s just one bikeway, this project’s problems are an example of broader trends within transportation decision making at the City of Minneapolis. Its story highlights the need for greater urgency to achieve City goals, improved transparency and a strengthened resolve to challenge the car-dominated status quo.

There has long been a need for an easy and comfortable north-south biking connection between downtown Minneapolis and the Stevens Square, Whittier and Lyndale neighborhoods. After Our Streets Minneapolis volunteers spent months writing about the issue and working to make it a reality, the Whittier/Lyndale Bikeway project was created in the beginning of 2020. Following a year of design and public engagement, the project was approved and construction was announced to be completed by fall, 2021. However, as the year progressed, nothing happened. When residents contacted Public Works staff to check on the project’s status, they were told that roughly half of the project (the portion south of Lake Street) would be delayed until 2022. They were not able to get clear responses from Public Works about the reason for the delay.

Worse, the northern project portion has not been completed either. The segment from Lake Street to 28th Street has remained unplowed and closed through the winter. The tightly spaced plastic bollards that Public Works said would be used to protect the bikeway on 1st Avenue S until the street is reconstructed in 2023 were never installed. Instead, bollards are widely spaced along most of the route and are completely missing in other segments. Barriers and signage to prevent cars from entering the bikeway are also missing at many intersections. The insufficient protections on the northern portion will now remain in place for another year, as the City pushed back the start date for the 1st Avenue S reconstruction project until 2024.

The result is a delayed, watered down and partially implemented project that has already resulted in problems.

Despite a recently refreshed complete streets policy that prioritizes people walking, rolling and biking in transportation decision-making, the City of Minneapolis continues to place the needs of these transportation users secondary to automobiles. While the Whittier/Lyndale Bikeway is a major improvement, it was designed to preserve the maximum amount of parking along the route, resulting in a bikeway where sections narrow to accommodate more parked cars. 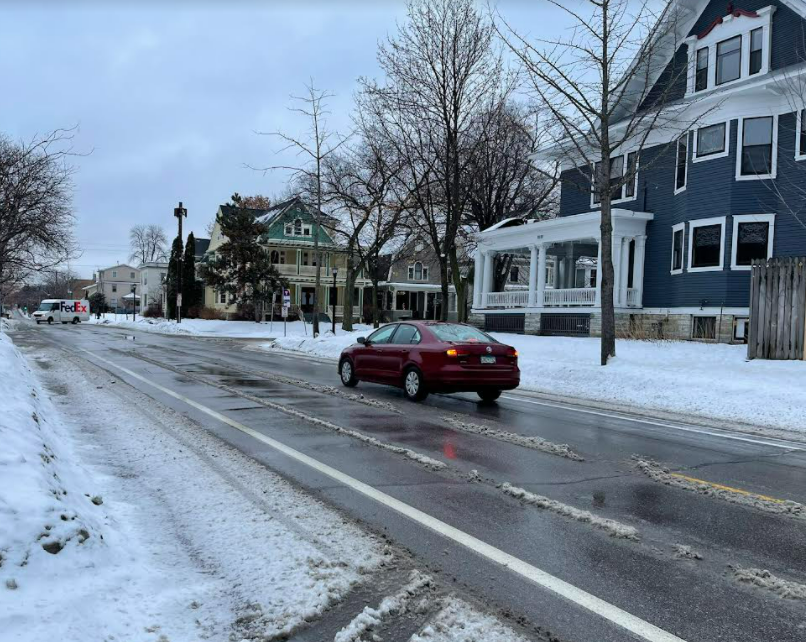 One of the best ways to see which transportation users are prioritized in Minneapolis is to walk, roll or bike in the city during winter. While cars zoom along plowed streets, people walking and rolling must trudge through the patches or piles of snow and ice that remain from property owners who didn’t shovel. Like sidewalks, unprotected bike lanes are essentially seasonal bike lanes, as shoved-in banks of plowed snow and parked cars render them useless in the winter.

The Hennepin Avenue S reconstruction project provides another example of car-centric planning. It was encouraging that Public Works staff selected a street design that included both full-time transit lanes and a protected bikeway. However, accommodating car traffic remained the foundation of the new street design, while the bus lanes, sidewalks, street trees and bikeway were placed in competition with one another for the remaining right-of-way. Because of this, bus lanes disappear and sidewalks narrow near the busiest intersections where they are most needed.

The delay of the Whittier/Lyndale Bikeway is also emblematic of a pervasive lack of urgency within Minneapolis Public Works. By delaying the project another year, residents were again forced to make the choice between biking in unsafe conditions or not biking at all. The delay meant another year without a bike connection to drop kids off at school, to commute to work and to access destinations in their neighborhood.

Every time a delay like this one occurs, it erodes the City’s essential climate and transportation goals. These goals include eliminating all serious injuries and traffic deaths on Minneapolis streets by 2027, also known as Vision Zero. The City’s Climate Action Plan includes a goal to reduce vehicle miles traveled (VMT), a measure of driving distance, by 1.8% per year by 2030. The City of Minneapolis Transportation Action Plan outlines additional goals to be accomplished by 2030. These include:

All of these goals support an overarching target of having three out of every five trips in the City be by walking, biking or transit by 2030. The 2027 and 2030 deadlines are rapidly approaching and these targets are seeming increasingly out of reach.

A lack of transparency and accountability

The Whittier/Lyndale Bikeway project was representative of a third issue within Minneapolis Public Works, a lack of transparency and accountability. The bikeway was delayed without notice. The project website was updated only after multiple residents had emailed Public Works to ask about the lack of progress.

Other examples abound. The recently completed Johnson Street NE reconstruction project was set to include raised crosswalks, an exciting feature that dramatically improves safety for people crossing the street. However as the project neared completion, a resident noticed that the raised crosswalks were never built. An email to Public Works staff resulted in a brief explanation that the raised crosswalks that had been promised were scrapped because they weren’t “feasible geometrically.”

On Blaisdell Avenue S, a resident who regularly bikes with their kids emailed the City to report that all of the protective bollards were missing. Staff responded and said that the bollards would be replaced by October 2021, but they are still missing four months later.

Though the Hennepin Avenue S redesign recently moved forward, this came after months of delay and silence about the project. The final design was supposed to be selected and approved by the City Council last year, but that timeline was inexplicably delayed. It became apparent that forces were working behind the scenes to delay the design’s approval and ultimately remove the dedicated bus and bike lanes. All the while, the public was left in the dark. There continues to be a concerted effort to water down the project and cement the auto-centric status quo.

The citizens of Minneapolis deserve transparency from Public Works about the decisions that will determine the future of our transportation system. We deserve to know about potential project changes or delays before they are implemented. We deserve to know the rationale behind that decision in order to determine if those reasons are acceptable or not. If the issue is a lack of funding or staff capacity, let the people know. It may encourage a dialogue about whether we are spending our City’s resources effectively. If a City Council Member or another agency or a business organization is working to delay or dismantle projects, then that must be made public. Our public servants need to be accountable to the people they serve.

The stakes are too high

The need to transform transportation in our city has never been more urgent. The status quo is unacceptable. People should not be permanently injured or killed by crossing the street or biking to work. We shouldn’t accept that children who grow up near busy roads and freeways suffer from lifelong health impacts. These impacts disproportionately affect people of color and others who have been left out of the transportation decision-making process. Winter snowfall shouldn’t mean that a person with a disability can no longer easily or comfortably walk or roll in their neighborhood. Climate action must be integrated into every aspect of transportation decision making at the scale of the crisis we are facing. If the status quo continues, our City’s goals and the vision for a more accessible, equitable and sustainable transportation system in Minneapolis will fade.

Addressing these pressing issues will now be the responsibility of Margaret Anderson Kelliher, the current MnDOT Commissioner who Mayor Jacob Frey has selected to be the City’s next Public Works Director.

We’ve seen many recent examples of how it is possible to rapidly transform transportation decision making to put people and the planet first. The Paris bike boom is a great example. If we show people what a better world looks like, they will embrace it.

It’s because of this that our organizing around projects like the Whittier/Lyndale Bikeway will not end until they are seen through to completion. One project at a time, we are working on building a more transparent and accountable transportation decision making system in Minneapolis that puts people before cars and acts with urgency to address the issues that we are facing.

Our staff and volunteers are out in the community every week door knocking and talking to people about these important issues. Join us to get involved.