Why should there be a bikeway on 28th Street?

Crossposted from Bikeways for Everyone.

Minneapolis plans to add protected bike lanes to 26th and 28th streets in the Phillips neighborhood. The project could calm dangerous streets and make short trips between Hiawatha Avenue and Portland Avenue much easier for local residents.

But here's a question you might hear over the next year:

"Why should we put a protected lane on 28th Street? The Midtown Greenway is just a block away."

This question actually has an answer. 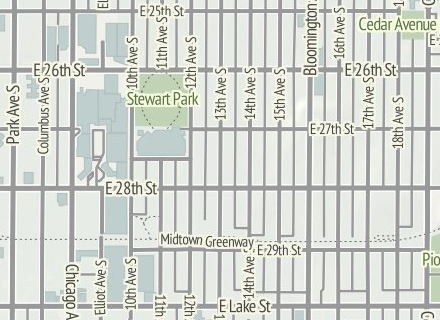 When a block is more than a block

28th Street and the Midtown Greenway are indeed a block apart, as the crow flies. But for those of us who use wheels instead of wings, getting from the Greenway to 28th isn't that easy. There are only four ramps off of the Greenway between Portland Avenue and Hiawatha Avenue — that's one every five blocks. What looks like a block-long distance on a map usually involves three or four extra blocks of biking, plus a significant hill. For ordinary folks making short trips by bike, those detours might be a dealbreaker.

Saying that the Midtown Greenway serves the Phillips neighborhood is like saying that I-94 serves the Seward neighborhood. Sure, people from Seward get on the freeway to go other places, and people from other places use I-94 to get to Seward, but 94 is useless for people who want to make a short trip in the neighborhood. I-94 provides mobility, and Franklin Avenue (a street that's "only a block away") provides access. No one believes that 94's existence makes Franklin redundant.

In the same way, the Midtown Greenway provides mobility for longer rides, and a protected bike lane on 28th Street would provide access for shorter trips.

Phillips isn't just space to be traversed as quickly as possible; it's a neighborhood where people live, learn, work, worship, and grow old. Let's take a look at some of the destinations on 28th Street: Abbott Northwestern Hospital, Allina Healthcare, Andersen Elementary School, Abubakar As-Saddique Islamic Center, St. Paul's Lutheran Church, and some low-income housing: New Village Co-op and Ebenezer Park Apartments. These establishments reflect the diversity of the Phillips neighborhood. Bikeways for Everyone believes that we can build a city where everyone feels safe and comfortable riding a bike, age 8 to 80, no matter their race or economic status. There's no reason this neighborhood's great diversity shouldn't be reflected in its cycling community.

Phillips deserves safe streets and great bike infrastructure. The Midtown Greenway does indeed pass through Phillips, but it doesn't provide access to the neighborhood's many destinations. A protected bike lane on 28th Street would be a boon to the economy, health, and safety of the neighborhood.

So if you hear someone ask, "Why do we need a protected bike lane just a block away from the Greenway?" do them a favor. Answer their question.