Voices of the Downtown/Whittier Connection: Joelle

The Downtown Bikeways work group has been talking to people that live, work, go to school, eat, or recreate along the corridor that connects downtown with Loring Heights, Stevens Square, Whittier, and neighborhoods to the south.

One person that we spoke with is Joelle B., who teaches at MPS’ Emerson Spanish Immersion School. Emerson is located along the Downtown-Whittier corridor at 15th Street and LaSalle Ave S.

If you would like to share your support for a safe, protected bikeway that will connect downtown with Loring Heights, Stevens Square, Whittier, and neighborhoods to the south, please fill out this digital postcard. This interview has been edited and condensed for clarity.

What is your connection to this area?

I work for Minneapolis Public Schools, and live close enough in South Minneapolis that I love to bike to school when I can, and when the weather’s nice.

What are some parts of Minneapolis that to you feel comfortable to bike around?

The dedicated bike trails, like the Cedar Lake Trail and the [Midtown] Greenway  are fantastic. I used to live right off of the Cedar Lake Trail. It wasn’t until I moved away that I fully appreciated how wonderful it is. It was faster than driving often to get downtown to do things. Now I live in South Minneapolis, and it’s just a little bit harder with the streets and the traffic, so I always try to get to a trail as soon as possible.

What is it like to bike on the streets around your school?

I don’t love it. Especially on LaSalle. There’s no shoulder, there’s no room. Drivers aren’t looking for cyclists. Eventually there is a protected bike lane on Blaisdell, but people turn into it, they’re not looking. Because of that, I have avoided taking [Blaisdell] and instead I take Bryant. That feels safer.

How would you say the street environment around your school affects your school?

I think that a lot more families would come to school not in cars if the streets were a little more pedestrian friendly. Other than coming to school through Loring Park, there really isn’t a safe, direct route to this area. There are safe routes to the stadium, or over to the river, but not to this area of downtown.

Are there any activities that your students aren’t doing because of the way the streets are designed?

I think that we would do a lot more walking field trips if it was easier to go places. We go to Loring Park, and we can get to the Nicollet Mall pretty easily. But I feel like there are a lot of other opportunities for curriculum, like get to know your community, that we aren’t doing. Whenever we take kids over to the convention center for stuff, it’s always a lot more stressful than it needs to be.  It’s a not fun like, “Yay! We’re outside.” It’s more like, “Please don’t hit them! Oh, they’re not slowing down, they’re not slowing down!”

Do you have any thoughts about what would make the streets safer for your students?

I feel like it’s always safer when there’s road, some grass, and then the sidewalk - an actual physical divide instead of the sidewalk being right up next to the road. The sidewalks could be wider here too. Also, more signs and visual markings that helps drivers be more aware that they might see people biking here and acknowledge that they need to pass us safely.

Would you like to see protected bike lanes on this corridor?

Yes, absolutely. There’s nothing [protected] that runs down to South Minneapolis. I feel like people don’t know the safe streets to bike. I know people that live in Uptown that have biked on Lyndale [to get to Downtown] because that’s how they drive or take Uber to Downtown. I’m just like, “No, no, no, no, no!” If [bike infrastructure] was more established and visible, then people would use it more.

Do you have any thoughts about how you would like protected bike lanes along this corridor to look?

I don’t know if we have any of them here, but in Madison, on University Ave, they have an actual concrete barrier between the two-lane bike lane, and the road. And those are super great because cars can’t park there - there is a barrier that they can’t get over. And that also means that someone actually plows the bike lane, because it’s its own thing. Those are nice! And, [that bikeway] connects with some walking-only streets, which makes things really easy. 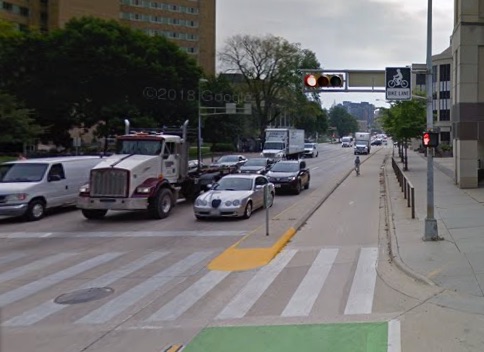 If you were going to say one thing to your council member about the streets on this corridor, what would you say?

There are so many resources and reasons to go Downtown, and I feel like the current state of these streets is a deterrent from going Downtown. Instead, people are choosing other areas of the city to go and spend money just because it’s easier to get there.

I coach Girls on the Run and we are stuck running around our concrete parking lot because there is no way that we would trust kids who might get spread out to run in this neighborhood. Changing that would be a really big help.

If you'd like to be featured in an interview about this corridor, or if you'd like to help the Downtown Bikeways work group advocate for protected bike lanes, please contact us.