Today (July 8), the City and Metropolitan Council announced a tentative agreement that would allow the Southwest Light Rail corridor to move forward. A public hearing is scheduled for tonight and the full City Council will weigh in on the issue soon.

So, what does the deal mean for people who bicycle and care about bicycling? Overall, it seems like a good compromise and we hope it can move forward.

1. The Southwest LRT will provide a very valuable connection between Minneapolis and SW suburbs. The Bicycle Coalition recognizes the importance of a robust regional transit system and is supportive of the Southwest line. Transit supports people who bike and bicycling supports transit.

2. The Kenilworth Trail would be maintained (rebuilt after construction) with the area rebuilt to a "park-like level of amenity" with collaborative design of local stakeholders. That would be done by retaining the south segment of shallow tunnel in an area where it is too tight to put light rail and freight rail together (let alone the trail as well). The north shallow tunnel portion is eliminated in this agreement, but the area is wider there and a trail can be retained next to light rail and freight rail tracks.

The only lingering concern for those worried about losing the bike/walk trail is that the south tunnel is pending Federal approval and environmental review. Staff from all stakeholders say they think Federal approval (and the funding that comes with it) will happen with the proposal including the shallow tunnel. It is not clear what would happen under this agreement if the Feds do not approve the tunnel or environmental review showed a yet-to-be-seen concern. That's a question I hope will be answered in the coming weeks.

3. Recognizing that there are no park-and-ride lots at Minneapolis stations, the package includes a number of pedestrian and bicycle improvements to access stations. The two biggest standouts on the bicycle side are upgrading the bike lane on 7th Street between 2nd Avenue and Plymouth Ave N to a protected bikeway and eliminating a trail gap on Van White Blvd. 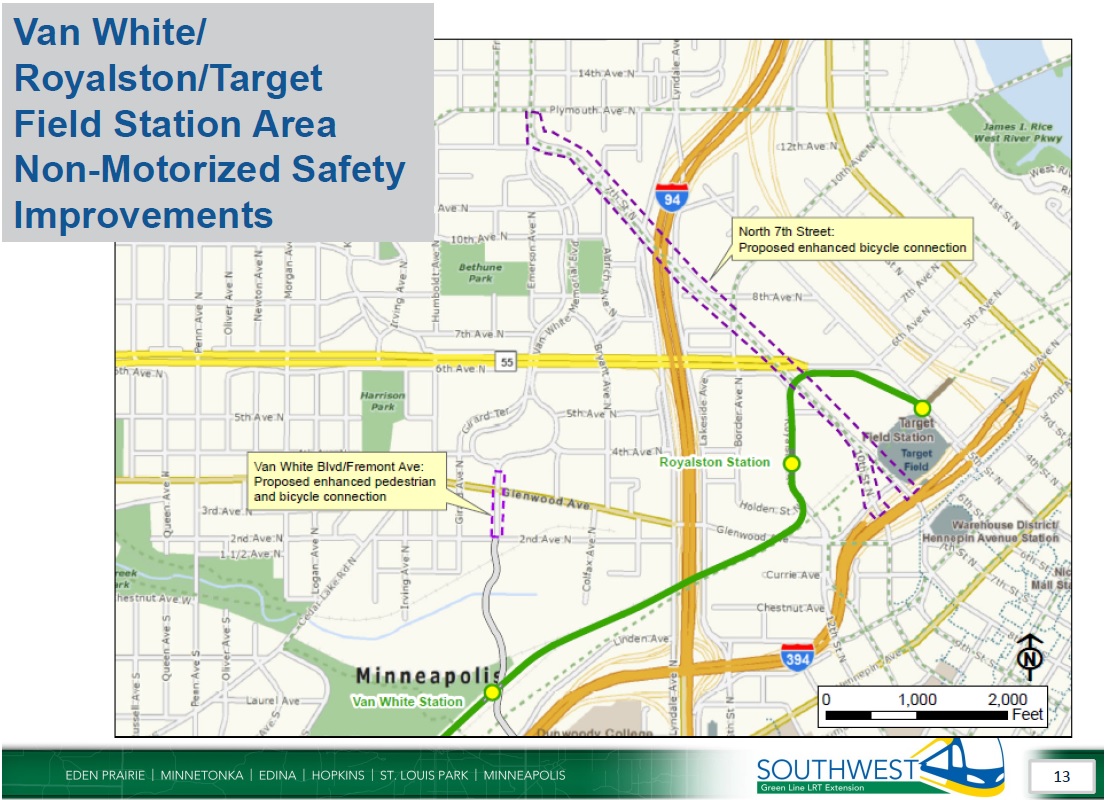 4. The 21st Street station is back in the plan, which will be a pretty good bike-up station.

Slides with a summary are available here.

For all of the details, the two memorandums of understanding (MOUs) are: