Protected intersection: time to see these in Minneapolis! 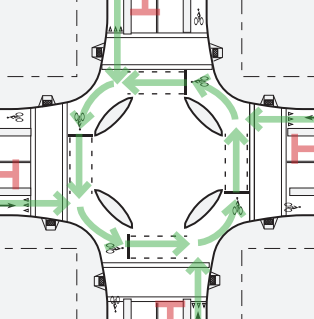 Minneapolis is making significant investments in a protected bikeway plan that includes safe and effective bike lanes along our streets, but there is currently not much being done to protect bikers as they cross through intersections on these new protected bikeways. But designs for "protected intersections" are being rolled out across the country, and we hope to see them soon in Minneapolis. Here are all the details about this newest bike design innovation!

A streets.mn post by Walker Angel drew my attention to The Separated Bike Lane Planning and Design Guide published by the Massachusetts Department of Transportation (MassDOT). As Angel illustrates, the Guide includes various details about the design of a protected bike lane through an intersection. This state sponsored guide can provide Minneapolis with viable design options for building more protected intersections.

Additionally, Alta Planning + Design recently released a report titled Building the Protected Intersection, addressing the applicability of the design for the protected intersection. Alta has been working to build protected intersections as well as study their effects in order for the design to be considered for the next update to the National Association of City Transportation Officials (NACTO) Urban Bikeway and Design Guide. Using six case studies, four in the United Sates and two in Canada, Alta examined how other cities and states implement the protected intersection to suit their needs, just as Massachusetts has.

The illustration below, in chapter four of MassDOT’s guide, shows zones of conflict between motorized vehicles and bikes through an intersection. The four intersection designs are different ways to merge bike lanes and vehicle lanes at intersections.

The illustration shows that these four intersection designs have different amounts of exposure levels to moving traffic, shown in purple. The design with the least exposure is the protected intersection. With the possible car paths in a skinny black arrow and the possible bike paths in a thicker blue arrow, the protected intersection shows only one point at which a bicyclist could potentially be in conflict with turning vehicles. In Minneapolis we generally build the first two designs - shared lanes and separated lanes with mixing zones. These however also have the greatest potential for conflict between automobiles and bicycles.

Crossing an intersection can often be the most intimidating and dangerous part for a biker. The effectiveness of protected bikeways diminishes unless the protection is extended through the intersection.

How to Build Better Intersections 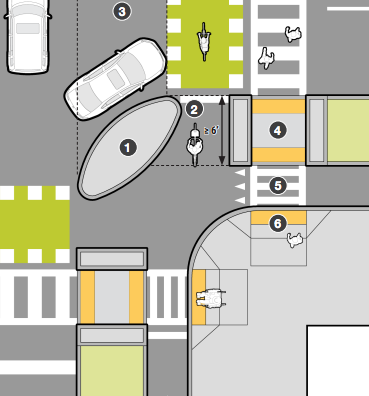 As the illustration above shows, how you design an intersection can have a huge impact on the safety and comfort of the intersection. There are a some specific design elements in protected intersections which can help increase the safety of the biker and minimize conflicts with other vehicles. The overall goal of these elements is to ‘minimize exposure to conflicts, reduce speeds at those conflict points, communicate right-of-way priority, and provide adequate sight distances’ (MassDOT, p. 54). Alta also emphasizes these elements.

1) Corner Refugee Island - This is a raised curb to modify and slow the turning radius of cars. The island is the most important element of the protected intersection, meant to slow down traffic and increase the turning radius enough so that the automobile is close to perpendicular before crossing the bike lane and the pedestrian walkway. In addition to slowing turns, this allows for more visibility for pedestrians and bikers.

2) Forward Bicycle Queuing Area - Also seen in mixed or shared intersections, this element allows stopped vehicles and those turning right to see the bicyclist before they begin moving in to the intersection by putting them ahead of them. This design also allows effective time for bikes to yield to turning vehicles as they approach the intersection on a green light.

3) Motorist Yield Zone This is space for a turning vehicle to yield while allowing other traffic in the lane to proceed through the intersection. This element requires that the bike and pedestrian crossings are constructed away from cross traffic. The conventional designs of both pedestrian crossings and bike crossings is to build them right next to the moving traffic. Building these away from the cross traffic allows for the motorist yield zone, increasing visibility between motorists and non-motorists while allowing through traffic to proceed.

The remaining elements are important for pedestrian safety. The pedestrian island (4) and the pedestrian bike lane crossing (5) allow the pedestrians to navigate bike and car traffic separately. The design is also intended to shorten the distance to cross the street, creating a more inviting crossing.

An optional design element of the protected intersection is bike-specific traffic signals. MassDOT does not describe this element as critical but Alta considers it a key feature of a protected intersection. Bike oriented signals effectively inform bikes when they may move safely across the intersection. Signal phasing can be used to allow bicycle traffic to move while other vehicles are stopped. This delay would provide more safety to the bikers by increasing their visibility to motorists, and could also allow more seamless car movement once motor traffic is given the green. There are phasing regulations set by the Federal Highway Administration (FHWA) that determine what types of phasing can be used. Alta delves into this in chapter 7 of their report. 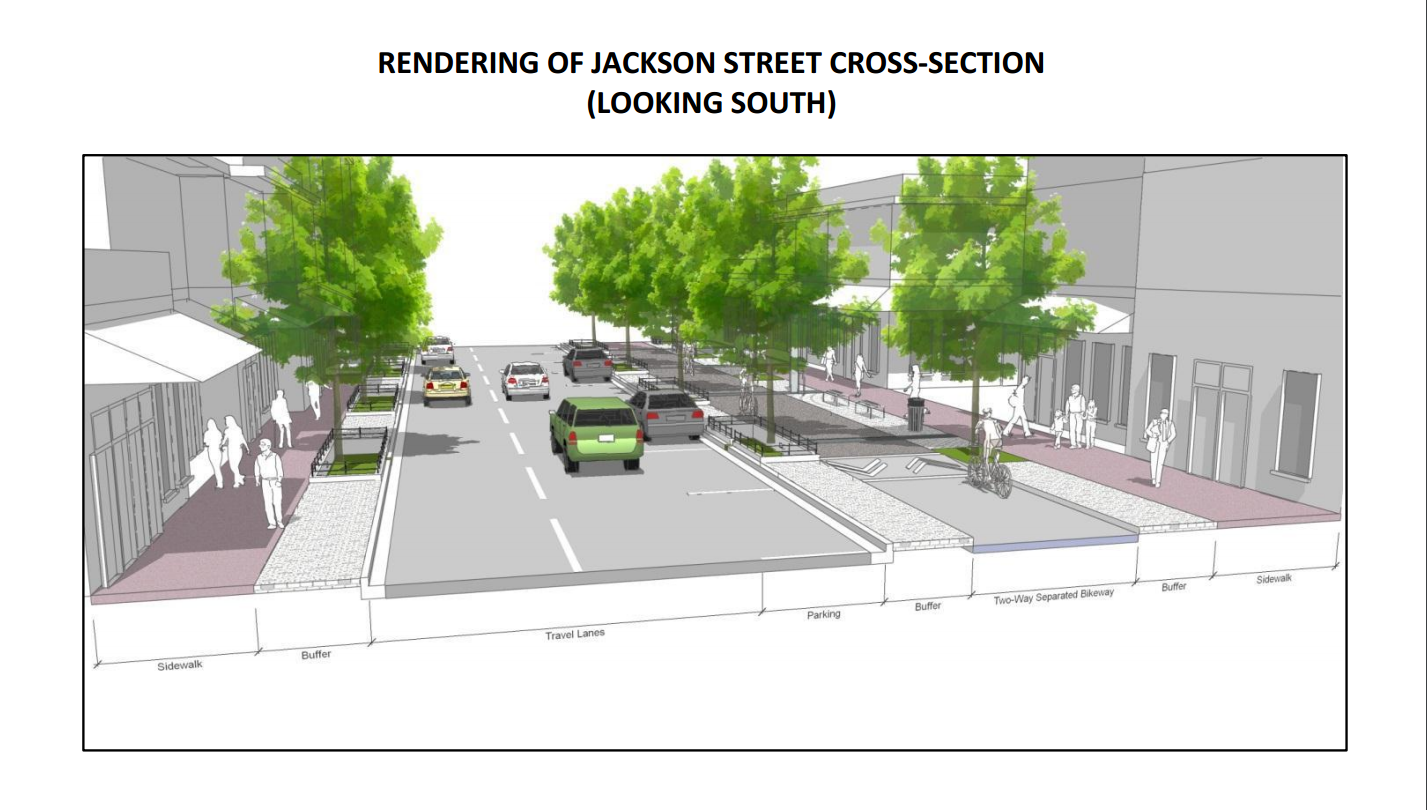 Because they require concrete to be poured and affect stormwater treatment, these intersections will generally only be built during full street reconstructions. The marginal cost for the design will be a much smaller percentage of the total cost for a reconstruction project than it would be for adding this to a constructed street. In addition, all the elements mentioned above demand a fair amount of space that cannot always be heeded. Both Alta and MassDOT have included design recommendations to use in constricted spaces. The protected intersection may be a viable option for the proposed Hennepin Avenue reconstruction through the downtown corridor in 2020.

I encourage you to take a look for yourself at the Separated Bike Lane Planning and Design Guide. Chapter four includes other recommendations for slowing down traffic at conflict points, such as raised crossings, and designing protected intersections for constrained spaces. Additionally, there are specifications for a two-way separated bike lane, for a bike lane crossing driveways or access points, and intersection designs for roundabouts. 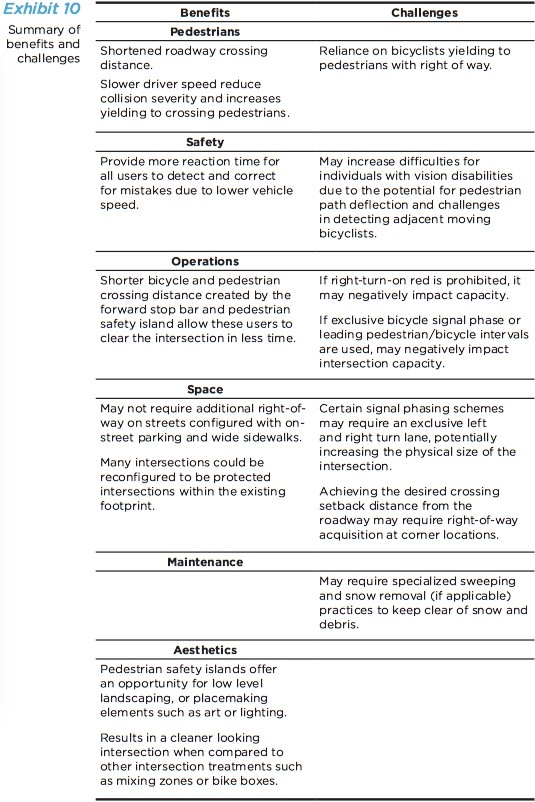 The Alta white paper oftentimes includes similar elements to what is in MassDOT’s guide, but by a different name. Alta expands upon the challenges that must be taken in to account when designing protected intersections (click table to read). Alta’s post is meant to inspire our hope that more of these interactions could be popping up around the nation. If the firm is able to incorporate these designs into the NACTO bike lane guide, there could be a significant increase in the amount of protected intersections in urban areas. It is an exciting glance into a future that relies less upon the automobile. I wish to have seen more examples of green space riddled among the case studies but that just leaves more exciting work to be done.

Here's a demo the Minneapolis Bicycle Coalition did as a pop-up protected intersection at Open Streets Mpls in 2014: