Protected Bikeways Are Happening, and Many Are On Board: A Recap of the East Lake Open Streets Event 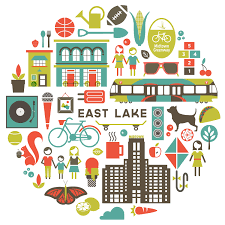 Sunday, July 24th, 2016 was East Lake’s energizing and action-packed Open Streets event. A day filled with fun activities dedicated to the community’s unity without the presence of motorized traffic. Numerous aligned streets are blocked off by barricades for roughly six hours to enjoy the rarity of motorized absence. Naturally, Open Streets also brings up the community’s street safety with the absence of vehicles from the picture. It’s a glimpse into what the streets could look and feel like with more bicyclists on the road and smarter bikeway infrastructure. I gladly signed up to be a volunteer for the host of the event, the Minneapolis Bicycle Coalition for their Bikeways for Everyone installation. 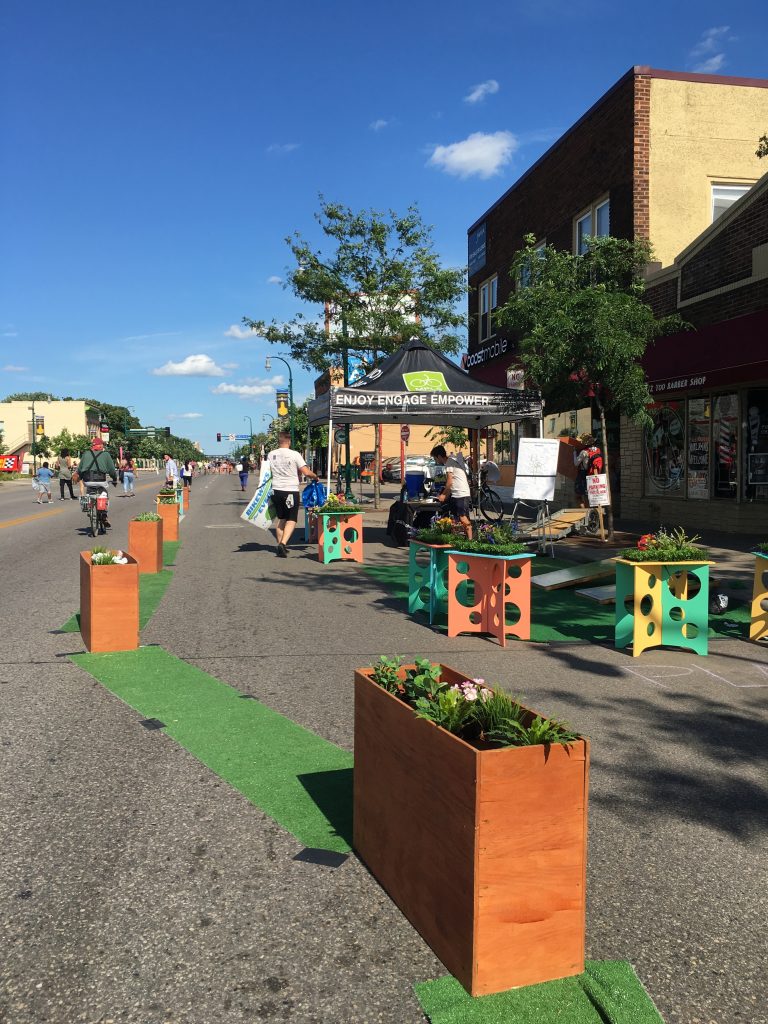 As I work outside for most of the week, I’m used to being outside for long periods of time. I am also a huge fan of the East Lake neighborhood, it’s a neighborhood I pass through frequently and went to high school in. I gladly signed up for two consecutive shifts, 1-3:30pm and 3:15-5:30pm. Having volunteered at the installation for a little over four hours, I noticed an overarching theme. Most everyone I observed and spoke with from the community and beyond was a fan of the temporary protected bikeway. I don’t think this was the fact that we were across the way from the most mouthwatering authentic taco stand on the block, either.

Bicyclist’s positive reactions throughout the lane and especially at the end were eye-opening. Bicyclists were very joyful and excited to have experienced such a different and new kind of bike lane. One they said felt comfortable riding with their kids, friends, and family through. Most bicyclists said they could see this in their community and wanted to know more information about how it works. There was almost no hesitation to fill out a postcard to their city council members to encourage more. Bicyclists even wrote small side notes to the council members with strong emphasis to get protected bike lanes into their communities, and fast. I even got two folks to sign while walking out of a small business near by, they loved how the bike lane looked on their street. As I do some canvassing professionally, I seldom see this level of engagement. 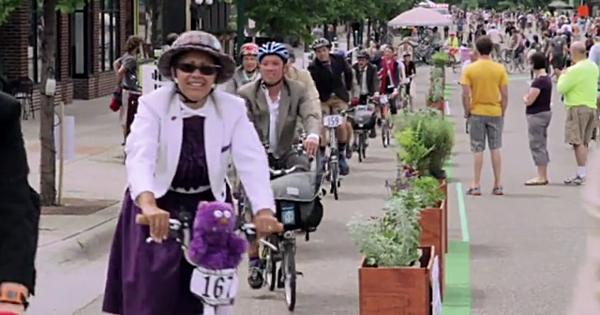 Opposition to the Bikeways for Everyone installation was not high. Out of hundreds of people I saw or spoke with, only a small count had negative words to share. I specifically remember a man yelling on his bicycle going past, “you’re ruining the roads with these!”. But he was on a bicycle himself. I could only wonder if he longed for safer bikeways when he was bicycling and safer street design when driving a vehicle. Out of most opposition were questions. Like, how is this going to work? What streets would even be fit for this? Good Questions. 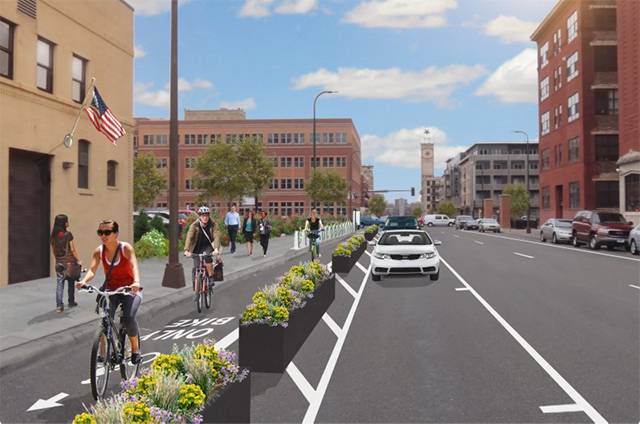 The Minneapolis Bicycle Coalition, the bicyclist leaders in charge of putting on all Open Streets events, created the Bikeways for Everyone campaign in 2013 to raise awareness for protected bikeways in Minneapolis. This campaign supports building 30+ new miles of well-designed protected bikeways by the end of the year 2020 to create an expanded citywide bicycle system (below photo). The idea of the protected bikeways is to provide a dedicated space for bicyclists to bike on that is physically protected from moving motorized traffic. This separation gives bicyclists the sense of comfort, safety, and space needed to enjoy a commute or recreational ride. The end result would be a system that improves public health, reduces pollution and car usage, attracts people to the city, strengthens small and large businesses, and adds advanced green spaces to Minneapolis communities. 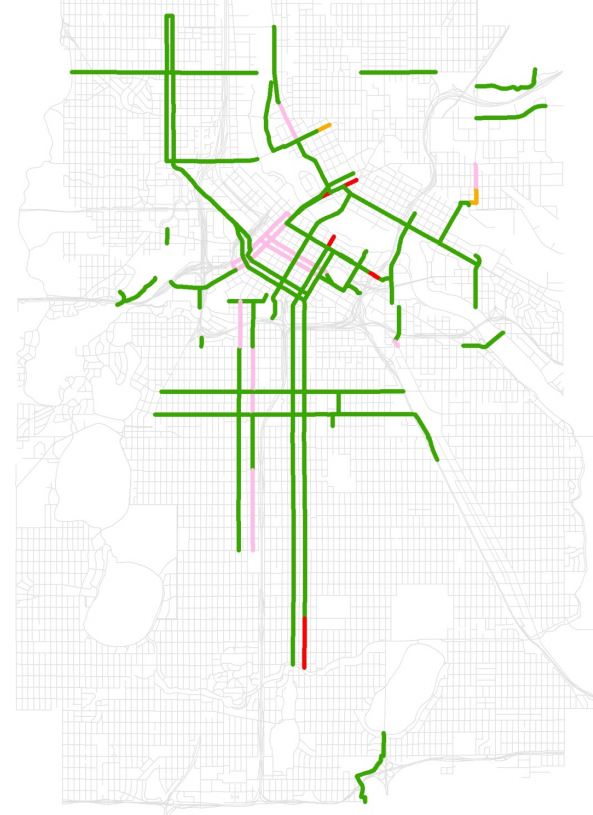 So far, the Bikeways for Everyone campaign has got a lot completed. With the goal to install 30+ miles of protected bikeways in Minneapolis by the end of the year 2020, 26th and 28th Street East were repaved in 2015 and decked out with bollard-protected bike lanes from the cross-streets Portland to Hiawatha Ave. What this means for bicyclists is now there is a one-way protected bikeway on each street going East to West Minneapolis. If a bicyclist wants to head East they would take the 28th Street one-way bikeway and West on the 26th Street bikeway. Putting these two one-way bikeways together creates a one-way pair that complement each other. Simple and easy. And safe! These same bikeways are looking to be extended even further to Hennepin Avenue by the end of 2020. For more of the Minneapolis Bike Coalition’s future bikeway projects visit:http://www.bikewaysforeveryone.org/future_projects.

I am proud of where Minneapolis is going with bicycle infrastructure. With the positive reactions and enthusiasm of bicyclists test-riding protected bikeways and the success of already-installed bollard-protected bikeways, I can say I’m genuinely excited for Minneapolis’s bicycling future. Volunteering at the East Lake Open Streets made me realize that I’m not the only one who wants change for our street safety. That many others want to see every street lined with protected bikeways so bicyclists have safety. It’s not a matter of who gets most of the road anymore or if one lane is making it slower for others. It’s how we share it and divide it to make it safer for everyone. 30+ miles of new protected bikeways by the end of the year 2020 is a great goal. But notice there’s a plus-sign on the end of that 30, meaning we can always do more.

Thanking the Minneapolis Bicycle Coalition for setting up such a fun, engaging event for each community. Open Streets is growing every year, and I will continue to be apart of it. Thank you to Bikeways for Everyone as well for having such a awesome, enlightening pop-up installation.

The original post is by Coalition volunteer Alice Avidor and is featured on Streets.mn. For more information and to volunteer at the next Pop-Up Protected Bikeway, click here!