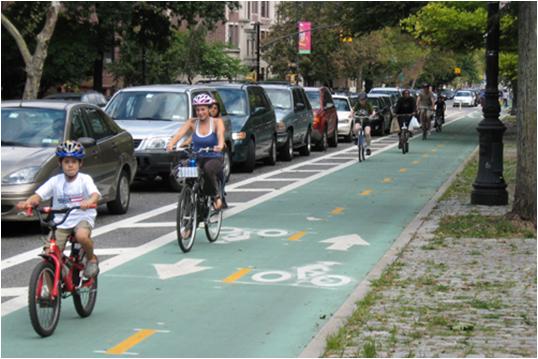 As our local officials work to finalize designs for the last portion of the Washington Ave reconstruction, the Minneapolis Bicycle Coalition has been advocating for the design that accommodates a parking protected bikeway on both sides of Washington Ave from 5th Ave to 35W.

Why parking protected bike lanes? For this last stretch of the corridor, it’s the best option to provide a safe, protected bikeway connecting downtown with the University of Minnesota West Bank Campus.

Here's a few examples of parking protected bike lanes working on other busy streets around the country.

Safety Gets a Boost on Telegraph Avenue (Oakland, CA )

In 2015, the city of Oakland installed parking protected bike lanes on either side of Telegraph Avenue, a busy corridor in the heart of downtown.  The results have been nothing short of spectacular:

While it is difficult to determine impact on economic activity in the area, it appears that there have been minimal impacts to business. Local business sales taxes increased in 2016, and five new businesses opened in the neighborhood since the project was completed.

Parking-protected bikeways were installed on 32 blocks of Columbus Avenue in New York City in 2011. The NYC Department of Transportation collected data before and after, and was pleased to discover that the bikeway had high usage – and very little impact on motorized traffic.

The Milwaukee Avenue parking protected bike lanes were installed in the summer of 2013. The 0.8 mile corridor carries 12,000 vehicles daily between downtown Chicago and its northwest neighborhoods, and had previously had painted bike lanes, without additional protection. 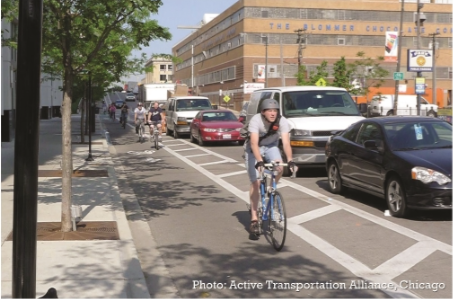