Olson Memorial Highway, or Highway 55, is an urban highway running through North Minneapolis. It is one of many urban highways that divides communities, pollutes the environment, and creates a hazardous environment for nearby residents. Olson Memorial Highway has a uniquely devastating history, as the construction of the highway was at the expense of a thriving Black cultural corridor along 6th Avenue N that was home to dozens of shops, businesses and music venues.

Some of these concerns were to be addressed with the construction of the Blue Line Light Rail Extension on Olson Memorial Highway. The light rail project was set to bring modest but much needed traffic safety improvements as well as robust public transit service. However, after years of planning and development, the Metropolitan Council re-routed the Blue Line Extension and planned safety and transit improvements disappeared. Harrison and other Near North neighborhoods are now left to deal with the negative impacts of this broken promise.

Our Streets Minneapolis and the Harrison Neighborhood Association are leading a campaign to address the harms of Olson Memorial Highway and reclaim the highway land to reconstruct 6th Avenue N.

We will continue organizing until the Minnesota Department of Transportation, the Minneapolis Public Housing Authority, the Metropolitan Council, Hennepin County and relevant elected officials and partners give a public commitment to:

The Minnesota Department of Transportation, City of Minneapolis, and Hennepin County have launched a project that falls well short of the community’s demands and expectations for safety improvements on Olson Memorial Highway, and includes no public commitment to Bring Back 6th! We're organizing for a full project timeline, inclusion of Phase 1 improvements, and for improvements to be made permanent. Read a comparison of the community's demands vs MnDOT's proposal here.

A Response from the Minnesota Department of Transportation

Since launching the Bring Back 6th campaign, we have knocked over 1000 doors and received hundreds of signatures in support of this better future. We’re happy to share that your voices have been heard. We received an official response from past MnDOT commissioner Margaret Anderson Kelliher acknowledging this campaign and MnDOT’s current plans for Olson Memorial Highway. Thank you to everyone who volunteered, signed the petition, and supported this important work. Read the letter and our response here.

Have a question about the Bring Back 6th vision? Visit our Frequently Asked Questions

A Vision for the Future

Today, Olson Memorial Highway is a 6-lane wide highway that divides Near North Minneapolis. The speed limit on the corridor is 40 MPH, though vehicle traffic often moves much faster. The highway includes few locations for people walking, rolling or biking to cross and insufficient public transportation options. This especially critical for the 1 in 5 households along the corridor who do not own a car.

Olson Memorial Highway does not serve Near North communities. We’re leading this campaign to bring a future beyond the highway. Our team compiled research and community feedback to develop a set of recommendations for the corridor.

Every year, people are killed and seriously injured in crashes on Olson Memorial Highway. The wide crossing distances and high traffic speeds make crossing the highway unpleasant and unsafe. The current infrastructure presents urgent concerns that need to be addressed immediately.

We calling on the Minnesota Department of Transportation to commit to:

As part of phase 1, we are also calling on Hennepin County, City of Minneapolis, Minneapolis Public Housing Authority and the Metropolitan Council to: 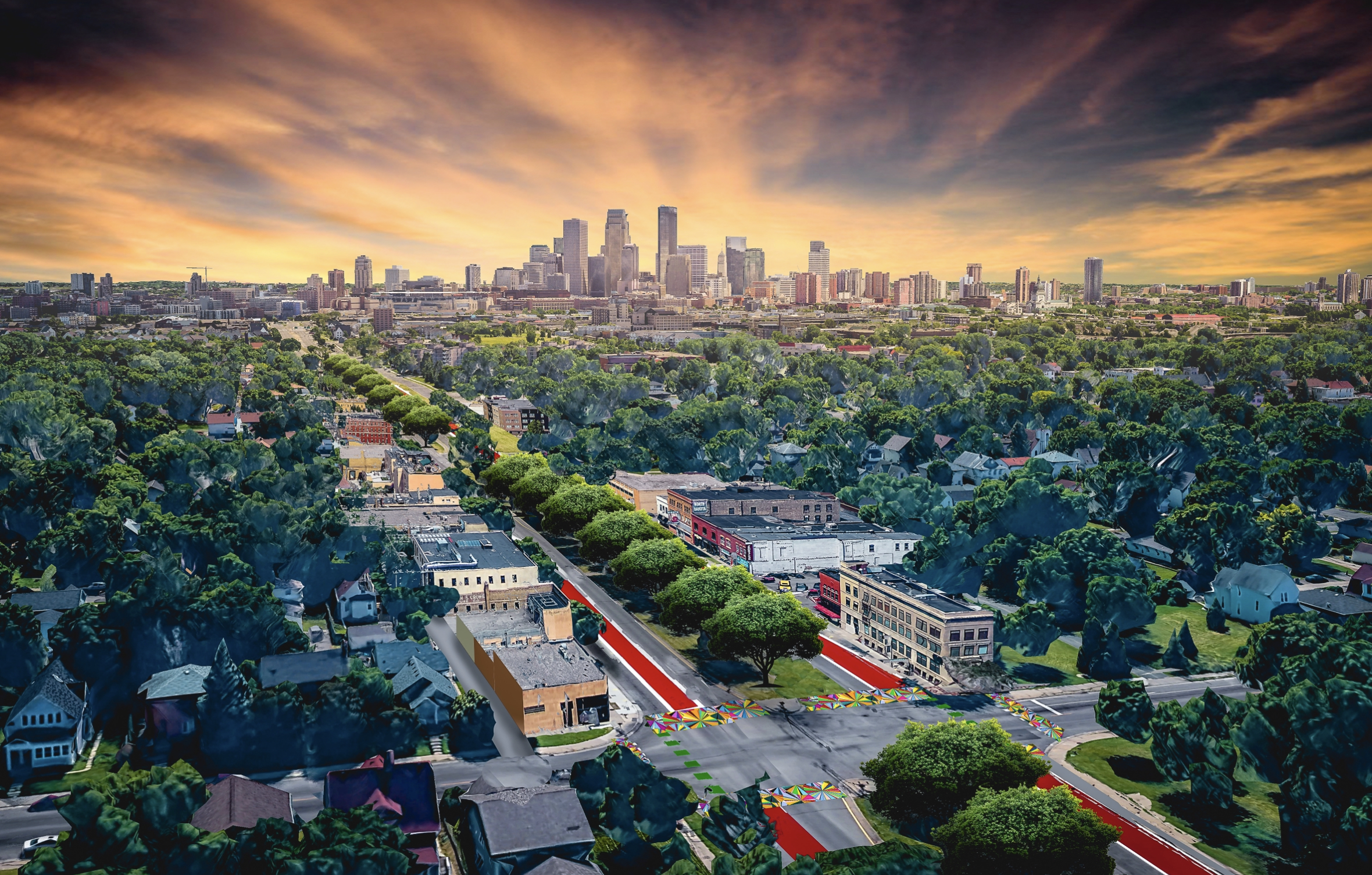 This phase focuses on a long-term vision to remove the highway as it is now and restore a walkable main street for Near North communities. Any and all of the adjoining parcels of publicly owned land that are included in the highway removal process should remain publicly owned and be placed in a publicly held land trust to ensure development benefits the community. We calling on the Minnesota Department of Transportation to commit to:

As part of phase 2, we are also calling on Hennepin County, City of Minneapolis, Minneapolis Public Housing Authority and the Metropolitan Council to:

Renderings have been provided by Jordan van der Hagen.

Government agencies have created planning processes that overlook the voices of our immigrant, refugee, low-wealth and BIPOC communities and cater to the economic interests of outside developers and affluent residents. These intentional choices about transportation projects have brought destruction and displacement to our communities — over and over again.

As we begin to engage in conversations around removing Olson Memorial Highway, we see the same entrenched processes and political interests once again threatening the families and small business owners who are the fabric of our beloved neighborhoods.

We demand that changes on Olson Memorial Highway intentionally seek to repair historic harms and invest in the well-being of our neighborhoods.

Our vision is a community-centered planning process that commits to a racial justice framework and restorative approach that intentionally directs economic, social and environmental benefits of highway removal to immigrant/refugee, low-wealth and BIPOC communities along the project corridor — and beyond.

Harrison and Near North were once centered around the vibrant 6th Avenue North. Today, the community lacks walkable access to grocery stores and local businesses, communal spaces, quality transit, and other core amenities. Instead of a highway, we could have…

Since the initial announcement of the Blue Line Extension, nearly 500 units have been built or are currently in development in Harrison; however, only 50 are affordable to the average Harrison household. Any plans to reconstruct the highway must prioritize affordable housing options that are truly affordable for our community members. Space freed up by highway removal should be used to create more public housing rental units and restore the 770 units of public housing that were lost due to privatization and demolition in the early 2000s. In addition to more rental units, Harrison and Near North communities need accessible paths to homeownership. 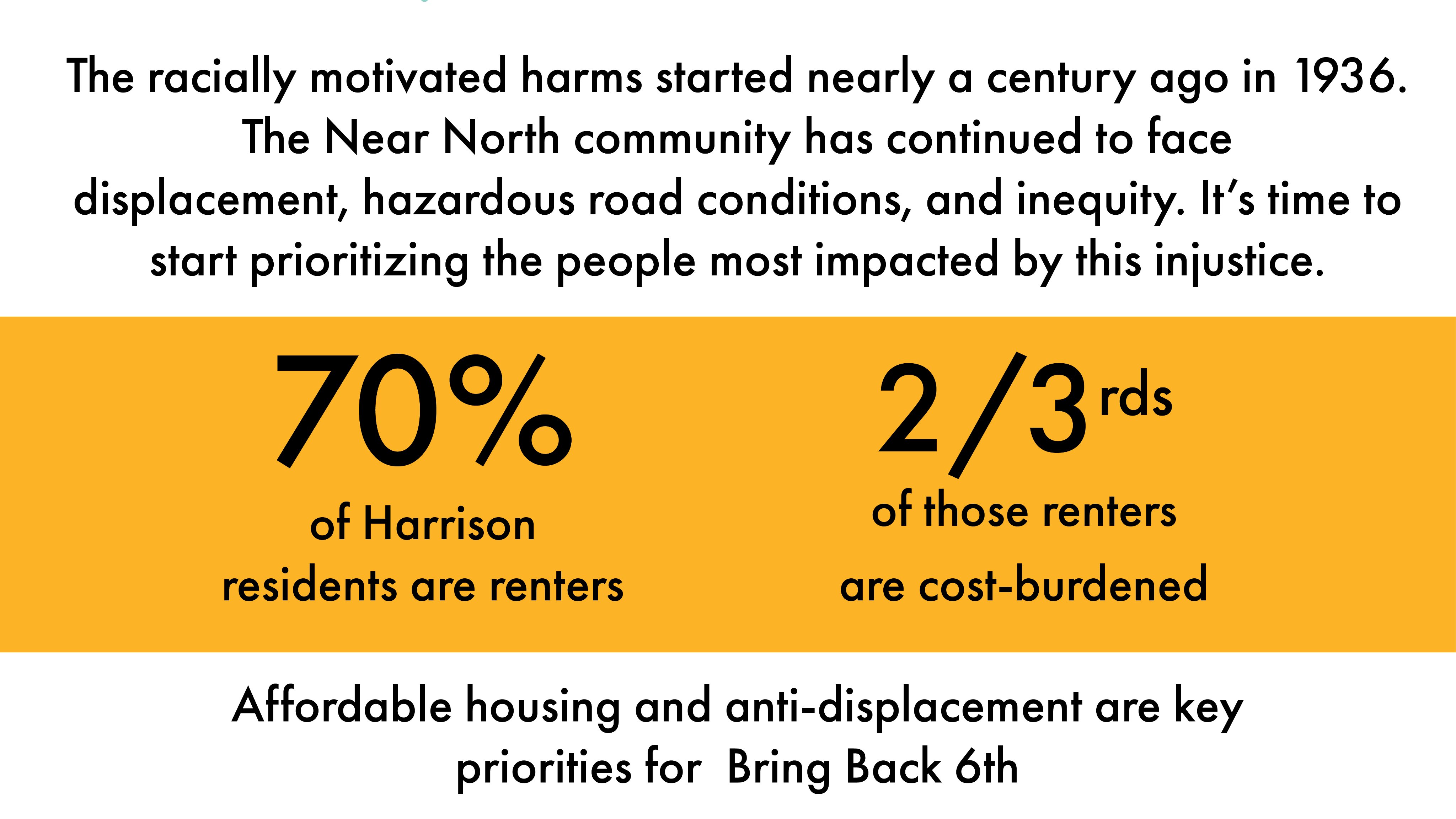 Olson Memorial Highway currently occupies over 26 acres of land between Upton and Lyndale Avenue N. This doesn’t include the frontage roads and many parcels of land along the highway that are publicly owned. A key part of this vision is to return highway land to neighborhoods and preserve existing publicly owned land along the corridor. This land should be preserved for the development of locally-owned, community-serving businesses and the construction of publicly-owned housing.

The State of Minnesota currently sets regional hiring goals for underrepresented populations in public works projects, including women and people of color. Unfortunately, little effort has been made to enforce, recruit and develop workers from these communities and these targets are rarely met. This project could be an opportunity to recommit to these goals and set a new standard for inclusive hiring practices.

Our proposal to reconstruct 6th Avenue North includes aggressive hiring targets. These include goals to have the project’s workforce be composed of 30% women and 48% people of color, with one third of the total workforce recruited from the surrounding neighborhoods of North Minneapolis. These goals are important tools to prioritize equity and use this project as a catalyst to welcome a more diverse workforce into the trades. In addition, we propose accountability measures to ensure more than half of new residences and retail businesses created due to redevelopment along the corridor should be owned by long-time residents of North Minneapolis. This will assist in restoring the local economic prosperity that once existed on 6th Avenue North.

The communities surrounding Olson Memorial Highway have faced a cycle of displacement and broken promises. A key part of Bring Back 6th! is community engagement and consent. We're out in the community talking to neighbors and shaping this vision to suit their needs. Any future project by MnDOT and other related parties should also center community engagement. As part of our Housing and Community Benchmarks, we're calling on decision makers to engage the community at every step of the planning process:

The History of Harm and Broken Promises:

The Destruction of 6th Avenue North

Where Olson Memorial Highway lies today was once a vibrant, predominately Black-owned business corridor along 6th Avenue North. The community had access to grocery stores, bakeries, entertainment, shopping, and more. It’s numerous bars and music venues formed the heart of the Twin Cities jazz community. The area was also a cornerstone of the Jewish community in Minneapolis.

Construction of the highway was approved in 1933. By the end of the 1930s, hundreds of businesses and homes along the route were completely destroyed and replaced with a wide highway cutting through the neighborhoods. Transportation policies at the time were rooted in racism, making it common for highways to be built through Black and Brown communities. In total, 1 in 20 Minneapolis residents lost their home to freeway construction. This devastation was not experienced equally. Urban highways like Highway 55 were intentionally routed through predominantly Black communities. In 1960, 80 percent of the Twin Cities’ Black population lived in the areas where I-35W, I-94, and Highway 55 were placed.

The METRO Blue Line Extension was originally planned to run through Olson Memorial Highway in the Harrison neighborhood. This project was presented to the community as a reparative infrastructure investment to address the harmful impacts and inequities that continue to persist in our communities after the demolition of Sixth Avenue North and construction of Olson Memorial Highway. MnDOT, Hennepin County and the Metropolitan Council promised to address some of the major pedestrian safety concerns that were well-documented by the community as part of the project.

The announcement of the light rail project spurred large-scale development and displacement. As speculators began buying up property along the proposed route, Harrison residents were forced out of their homes through either the physical demolition of their once-affordable units to make way for “market-rate” housing or through exorbitant rent increases that they were unable to afford. The construction of new “affordable housing” has not kept pace with the loss of affordable units and Harrison residents continue to feel the pressure of gentrification and potential displacement from their community.

Plans changed in 2020 when it was announced that, due to opposition from BNSF Railway, the light rail extension would no-longer be constructed along Olson Memorial Highway. The modest but much-needed pedestrian safety improvements and improved transit access would no longer come to Harrison and Near North. Unfortunately the damage of displacement and speculative development had already been done. Despite the fact that the Minneapolis segment of the route has changed, our communities demand pedestrian safety improvements that are crucial for residents to be able to safely move within their own neighborhoods and restore the corridor to its original use, a vibrant street and cultural corridor with walkable access to amenities and economic opportunities.

A Continued Risk to Public Health 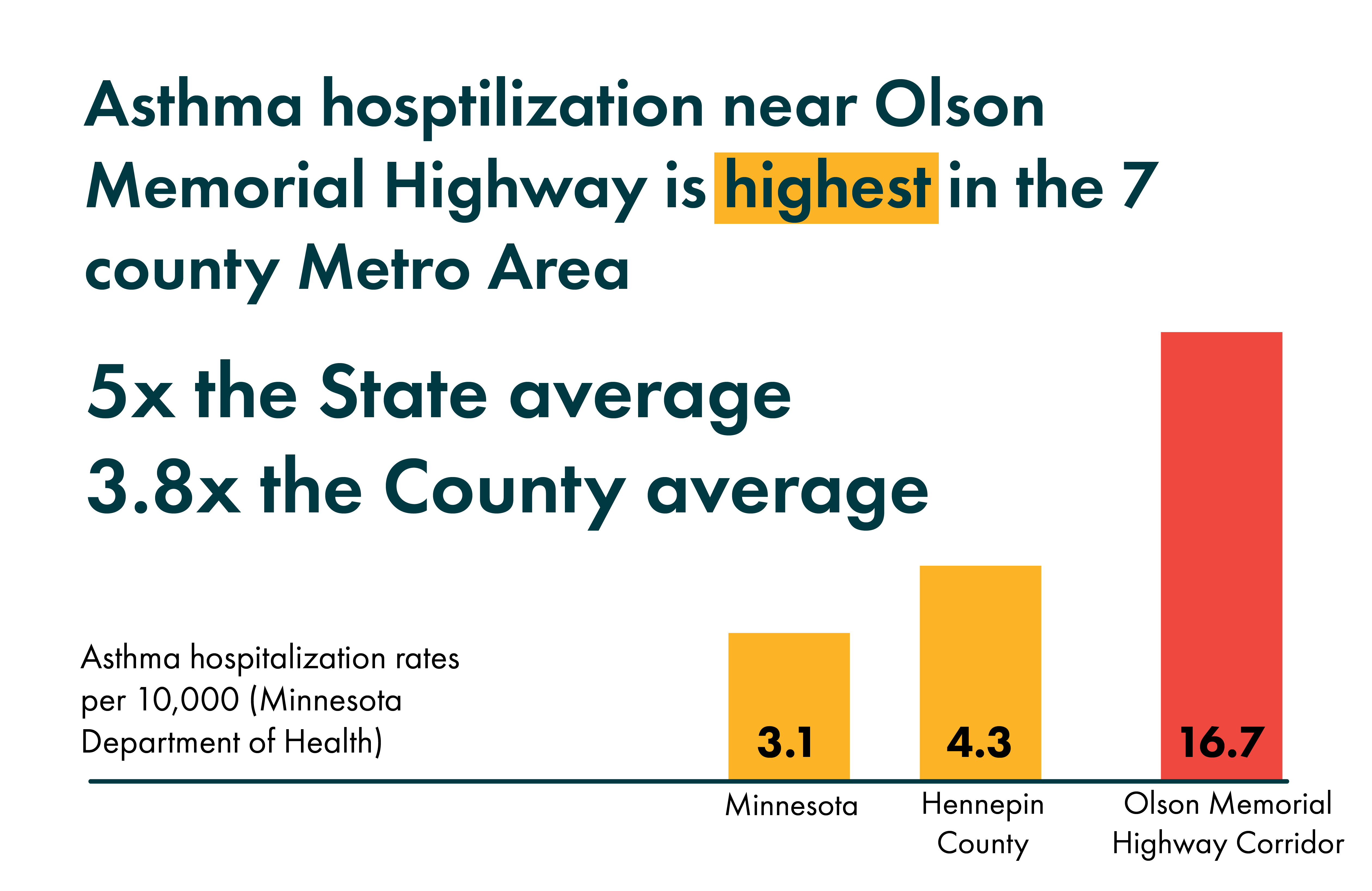 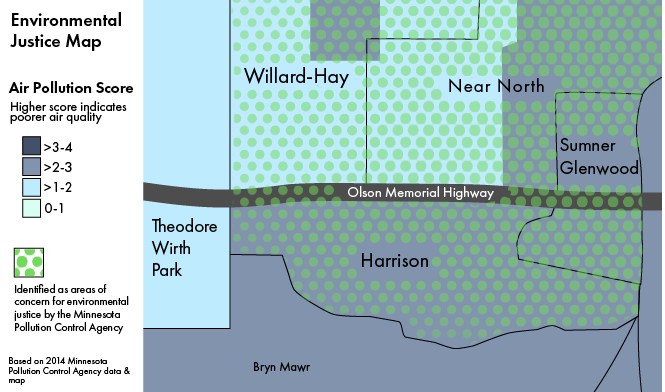 Air pollution from traffic has a serious impact on human health. The EPA states that “pollution exposures related to roadway traffic include higher rates of asthma onset and aggravation, cardiovascular disease, impaired lung development in children, pre-term and low-birthweight infants, childhood leukemia, and premature death.” These impacts are a significant contributor to severe health disparities. The 55411 zip code, which includes the entirety of Olson Memorial Highway in Minneapolis, has the highest rate of asthma hospitalization in the seven county metropolitan area. The life expectancies of Near North residents are among the shortest in the region, nearly 7 years below the state average.

Donate today to support our organizing efforts and help bring this vision to life.

Historical photos from 6th Avenue South and the Olson Memorial Highway are sourced from the Hennepin County Library.