Where Olson Memorial Highway lies today was once a vibrant, predominately Black-owned business corridor along 6th Avenue North. The community had access to grocery stores, bakeries, entertainment, shopping, and more. Its numerous bars and music venues formed the heart of the Twin Cities jazz community. The area was also a cornerstone of the Jewish community in Minneapolis.

Construction of the highway was approved in 1933. By the end of the 1930s, hundreds of businesses and homes along the route were completely destroyed and replaced with a wide highway cutting through the neighborhoods. Transportation policies at the time were rooted in racism, making it common for highways to be built through Black and Brown communities. In total, 1 in 20 Minneapolis residents lost their home to freeway construction. This devastation was not experienced equally. Urban highways like Highway 55 were intentionally routed through predominantly Black communities. In 1960, 80 percent of the Twin Cities’ Black population lived in the areas where I-35W, I-94, and Highway 55 were placed. 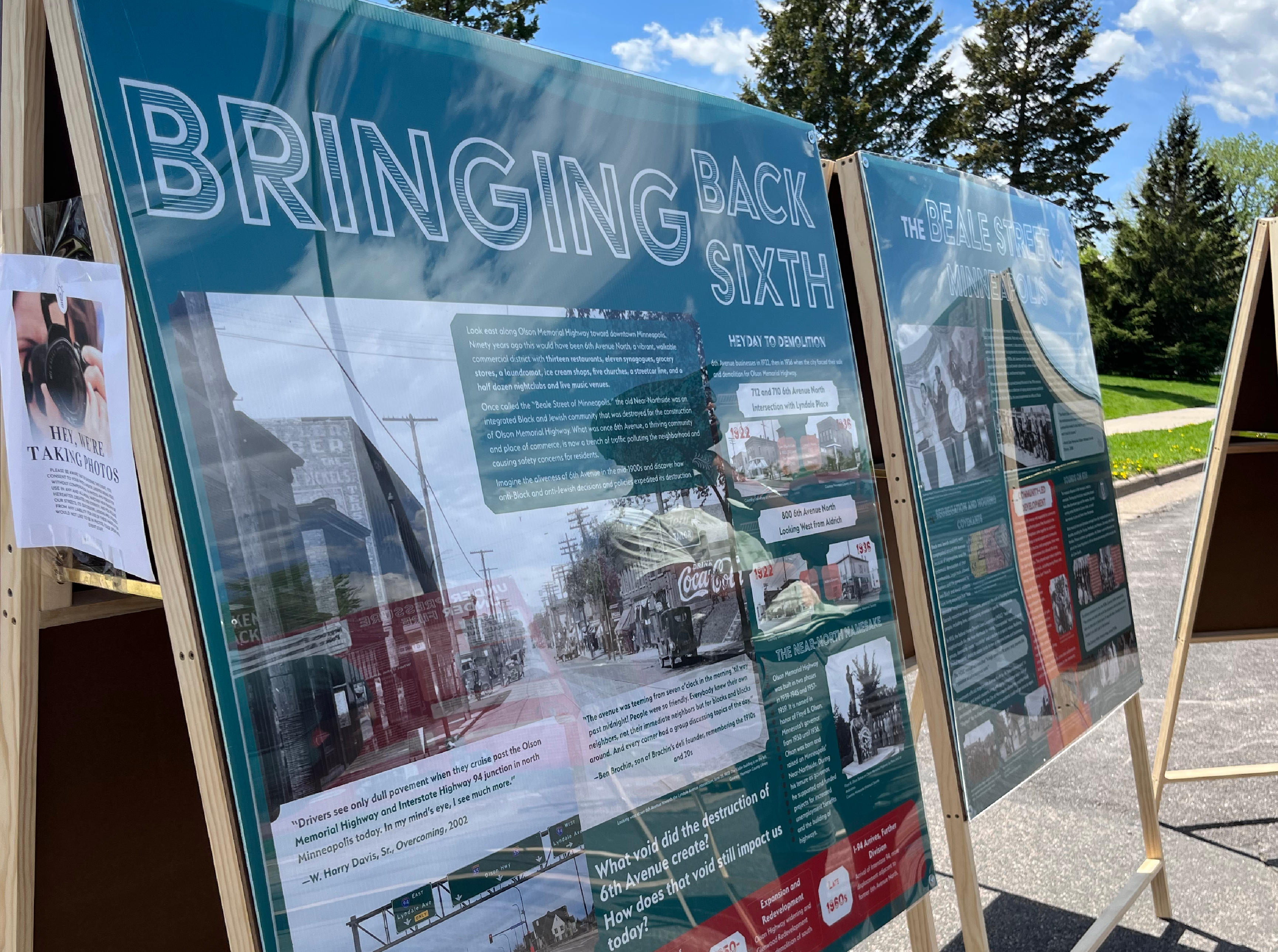 Our Streets Minneapolis partnered with the Harrison Neighborhood Association, University of Minnesota, and Sumner Library to create a mobile museum depicting the vibrant history of 6th Avenue North. The museum debuted at Imagine 6th Avenue North in May 2022 and has since been displayed at events across the City.

6th Avenue North: The Heart of a Community

Olson Memorial Highway was once 6th Avenue North, a vibrant, walkable commercial district with thirteen restaurants, eleven synagogues, grocery stores, a laundromat, ice cream shops, five churches, a streetcar line, and a half-dozen nightclubs and live music venues. When Jewish immigrants arrived toward the end of the 19th century, the Near Northside was a collection of aging stately homes and brick storefronts. By the 1920s, the area experienced an influx of Black entrepreneurs and families looking to put down roots in the lively neighborhood.

Once called the “Beale Street of Minneapolis,” 6th Avenue North was a hotbed for jazz in Minneapolis. Not only was 6th at the heart of a boundary-pushing music movement, it also attracted entrepreneurs and served people from many backgrounds to come and make their mark. During the first half of the 1900s, 6th Avenue North and its surrounding neighborhood was a Black and Jewish cultural hub, where residents worked, shopped, played, and learned together.

The Avenue was narrow, its sides packed from Lyndale to Penn, with everything a community member could need within walking distance. It was also a place of city disinvestment and limited resources, where buildings and employment could be unstable. Black and Jewish residents were congregated around 6th Avenue because of segregation and the systematic devaluation of their communities. In 1933, the federal Home Owners Loan Corporation (HOLC)  “redlined” neighborhoods, like the Near Northside, for “incompatible” racial and social groups, whose mixing contributed to “instability” and a perceived decline in property values. Redlining limited  opportunities for Black and Jewish community members to obtain funds to own or improve homes and businesses.

The neighborhood along 6th Avenue North was supported by Near Northside community leaders who created accessible gathering spaces where the community could thrive. Neighbors came together to construct community hubs that offered social support, invested in community power, and fostered creativity. Along with churches and synagogues, these community hubs were the cornerstones that allowed life along 6th Avenue North to flow. 6th Avenue North housed innovators who would transform music and culture, advocate for labor rights and housing laws, and incubate activist thinking. The impacts of the early Near Northside’s cultural contributions continue to shape Minneapolis to this day.


The Destruction of 6th Avenue North

On 6th Avenue North, government planners tried out new concepts to eliminate the “problem of urban blight” in Minneapolis. On the surface, “blight” was a term used to mean “eye-sore,” pointing to the condition of buildings. In reality, “blight” effectively cloaked prejudice toward non-white neighborhoods, legitimized disinvestment and frequently resulted in the demolition of entire communities. The fundamentally racist and untested method of fixing “blight” began in the 1930s with the construction of the Sumner Field Homes, Minnesota’s first federally-funded housing project. Designed to house the working poor in long brick row houses, the project was unlike anything seen before in Minneapolis. A Minneapolis newspaper aptly called the drastic measure a “government experiment.”

In the eight decades that followed, a cycle repeated itself again and again on the Near Northside: government-funded demolition done in the name of “improvement” pushed people out of their homes and businesses. Most of those pushed out were people of color. The displaced people had no say in the matter and were rarely consulted on the plans that forced them to leave.

The METRO Blue Line Extension was originally planned to run through Olson Memorial Highway in the Harrison neighborhood. This project was presented to the community as a reparative infrastructure investment to address the harmful impacts and inequities that continue to persist in our communities after the demolition of 6th Avenue North and construction of Olson Memorial Highway. MnDOT, Hennepin County and the Metropolitan Council promised to address some of the major pedestrian safety concerns that were well-documented by the community as part of the project.

The announcement of the light rail project spurred large-scale development and displacement. As speculators began buying up property along the proposed route, Harrison residents were forced out of their homes through either the physical demolition of their once-affordable units to make way for “market-rate” housing or through exorbitant rent increases that residents were unable to afford. The construction of new “affordable housing” has not kept pace with the loss of affordable units and Harrison residents continue to feel the pressure of gentrification and potential displacement from their community.

Plans changed in 2020 when it was announced that, due to opposition from BNSF Railway, the light rail extension would no-longer be constructed along Olson Memorial Highway. The modest but much-needed pedestrian safety improvements and improved transit access would no longer come to Harrison and the Near Northside. Unfortunately, the damage of displacement and speculative development had already been done. The light rail route has changed, but urgent community demands remain. Our communities demand pedestrian safety improvements that are crucial for residents to be able to safely move within their own neighborhoods. We demand the restoration of 6th Avenue North to its original use: a vibrant street and cultural corridor with walkable access to amenities and economic opportunities.

Each iteration of construction disrupted the Near North community. Despite this damaging cycle, residents and new arrivals, including Southeast Asian and African refugees, still found ways to thrive. Together, neighbors established new youth and cultural centers to fill the void left in the wake of destructive development. No matter the circumstances, the Near Northside has always found places to make and share music, art, food, and history.

The story of 6th Avenue North is a poignant picture of the devaluation and ultimate demolition of a community’s assets through state-led harm. Government leaders and city planners sacrificed 6th Avenue North for the needs of people who didn’t live on the Near Northside. The corridor became a place to funnel traffic, not a neighborhood street. It became a place to experiment on disenfranchised communities  with exploitative housing systems. And yet, the rich legacy of culture, business success, and racial integration shines a light on the necessity to bring back 6th Avenue North. The present form of Olson Memorial Highway is not a foregone conclusion. This corridor has been remade, many times over. This time, let’s remake it for and with the people who live here.

This recounting of history would not be possible without support from our partners, community members, and historians of the Near Northside.