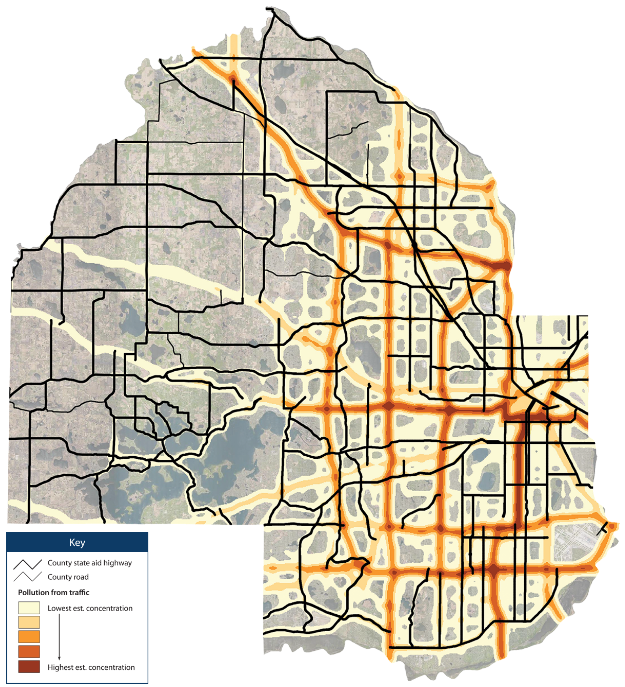 Over 23,000 people live within a half mile of Olson Memorial Highway. These residents experience air pollution that is two times worse than what is deemed unhealthy by the Minnesota Pollution Control Agency (MPCA). Traffic emissions are the biggest source of this pollution. 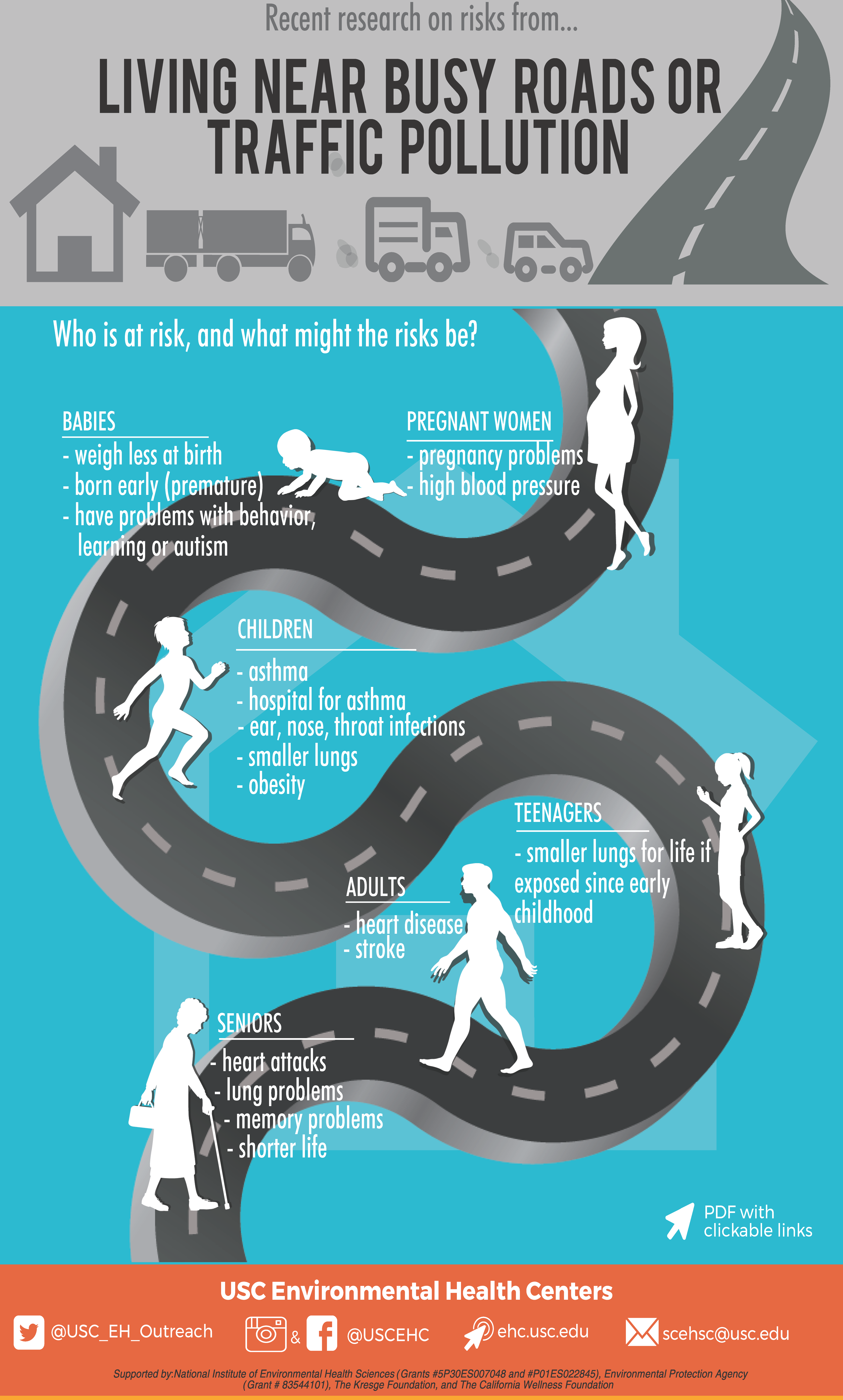 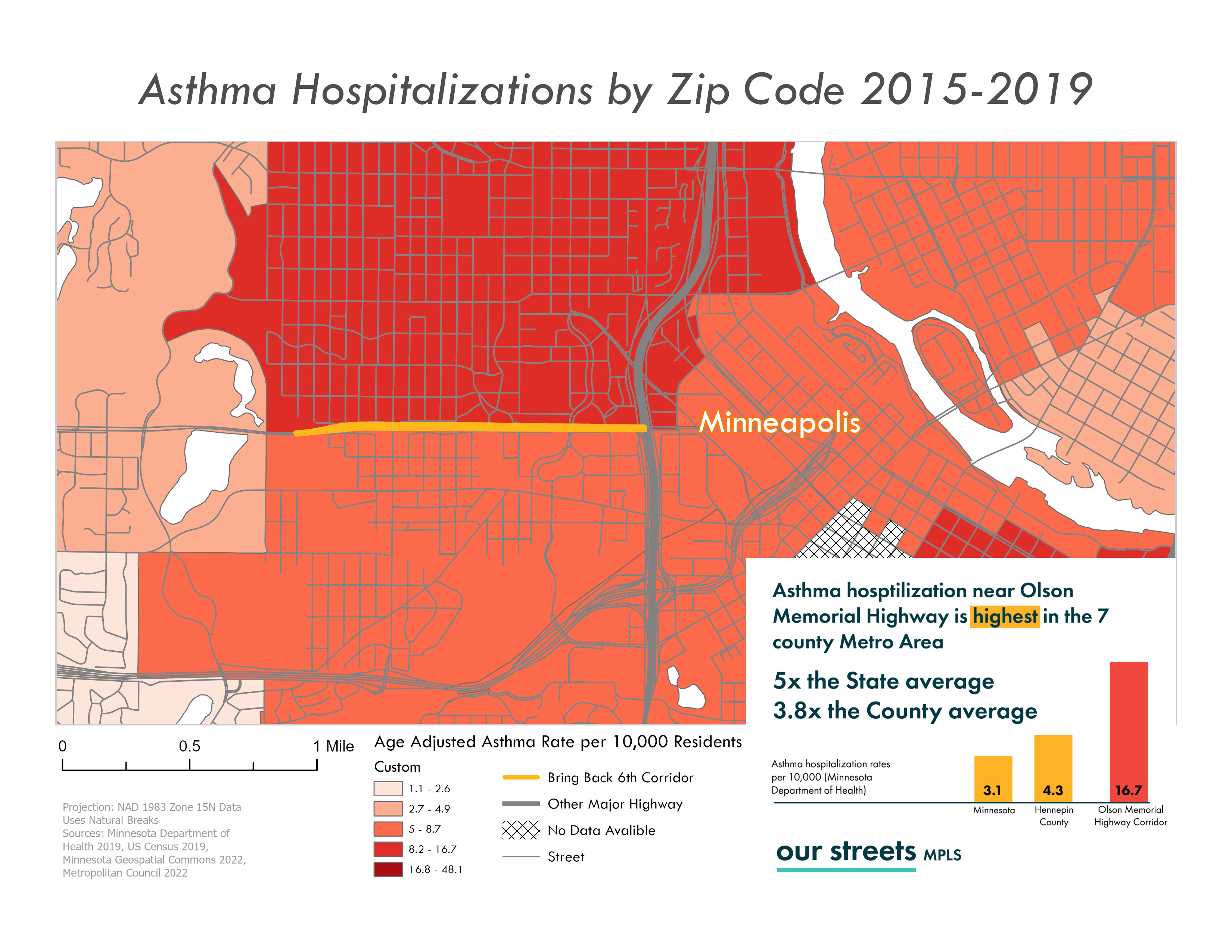 This pollution also contributes to disparities in life expectancy. Although Minnesota has the fourth highest life expectancy in the country, people who live near Olson Memorial Highway have a significantly lower life expectancy. In total, recent estimates have determined that air pollution kills over 300 Minneapolis & Saint Paul residents every year. 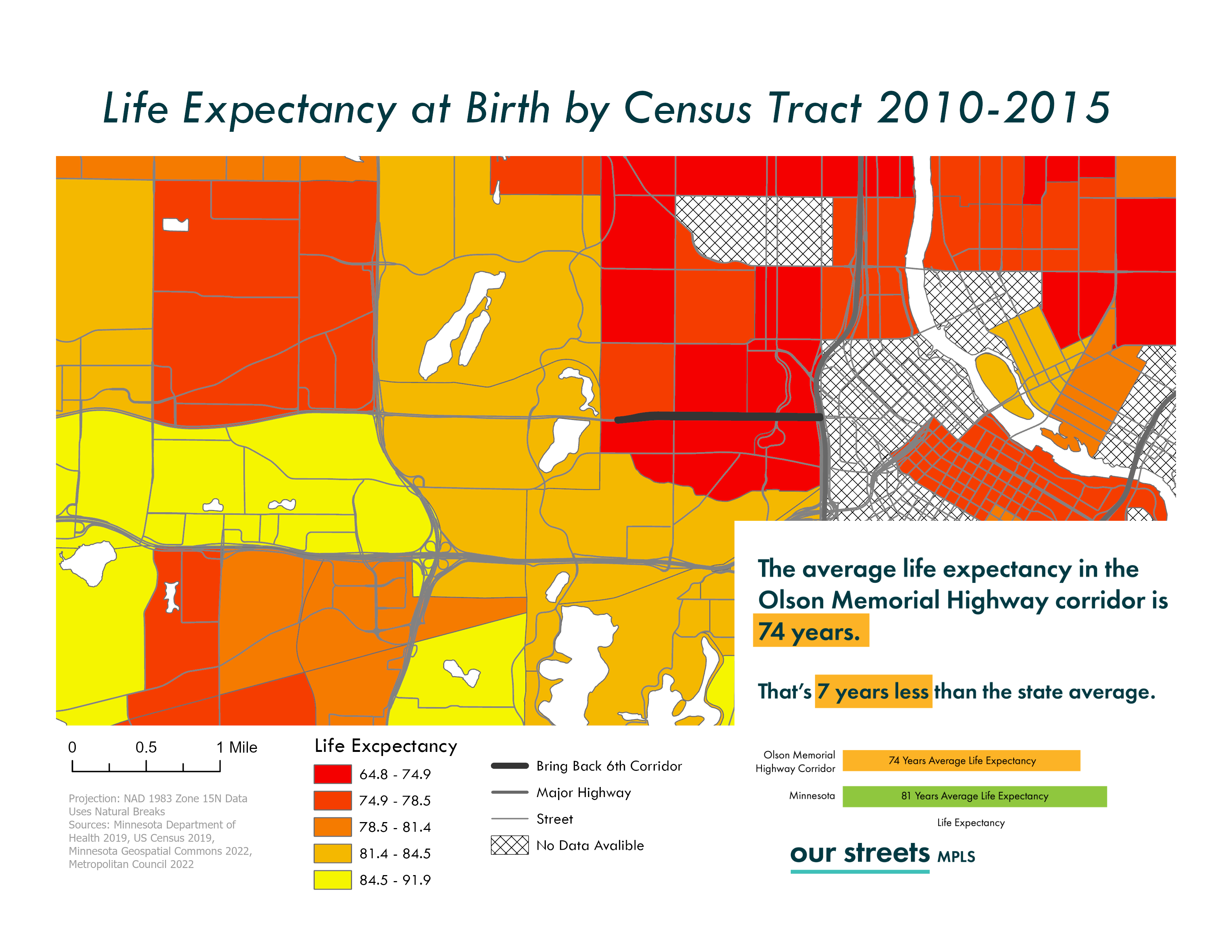 As was the case when Olson Memorial Highway was built, these impact’s are disproportionately experienced by Black, Indigenous and people of color. According to US Census Data, 49% of the people who live within a half mile of Olson Memorial Highway identify as a person of color, and this statistic increases closer to the highway. As a result, 77% of the area surrounding Olson Memorial Highway has been identified by the MPCA as “an area of concern for environmental justice.” This is unacceptable. Near North residents deserve clean air and healthy communities now.

Caption: graphic from All Traffic Solutions

Olson Memorial Highway creates both a mental and physical barrier that divides neighborhoods and puts people traveling on and across it at risk. Crossings are infrequent and inaccessible. The multiple wide lanes and 40 mph speed limit promotes dangerously high vehicle speeds.

Every year, people are killed or severely injured in traffic crashes on Olson Memorial Highway. The crash rate on Olson is amongst the highest in the City of Minneapolis and the highway is included on the City’s “High Injury Crash Network.” For decades, residents have been asking the City of Minneapolis and MnDOT to take the necessary steps to prevent these tragedies. However, both MnDOT and the City have chosen to ignore these safety issues, instead prioritizing high speeds for suburban commuters.

When 6th Avenue North was replaced by Olson Memorial Highway, it left a vacuum of economic opportunity and neighborhood amenities. What was once a vibrant, walkable main street with hundreds of homes and small businesses is now acres of highway pavement. Millions in community wealth was destroyed by public agencies and home and business owners were never fairly compensated.

The highway also incentivized suburban sprawl development and suppressed surrounding property values. It sent customers, investment and job opportunities out of Near North and into the suburbs, making it difficult for local small businesses to thrive. 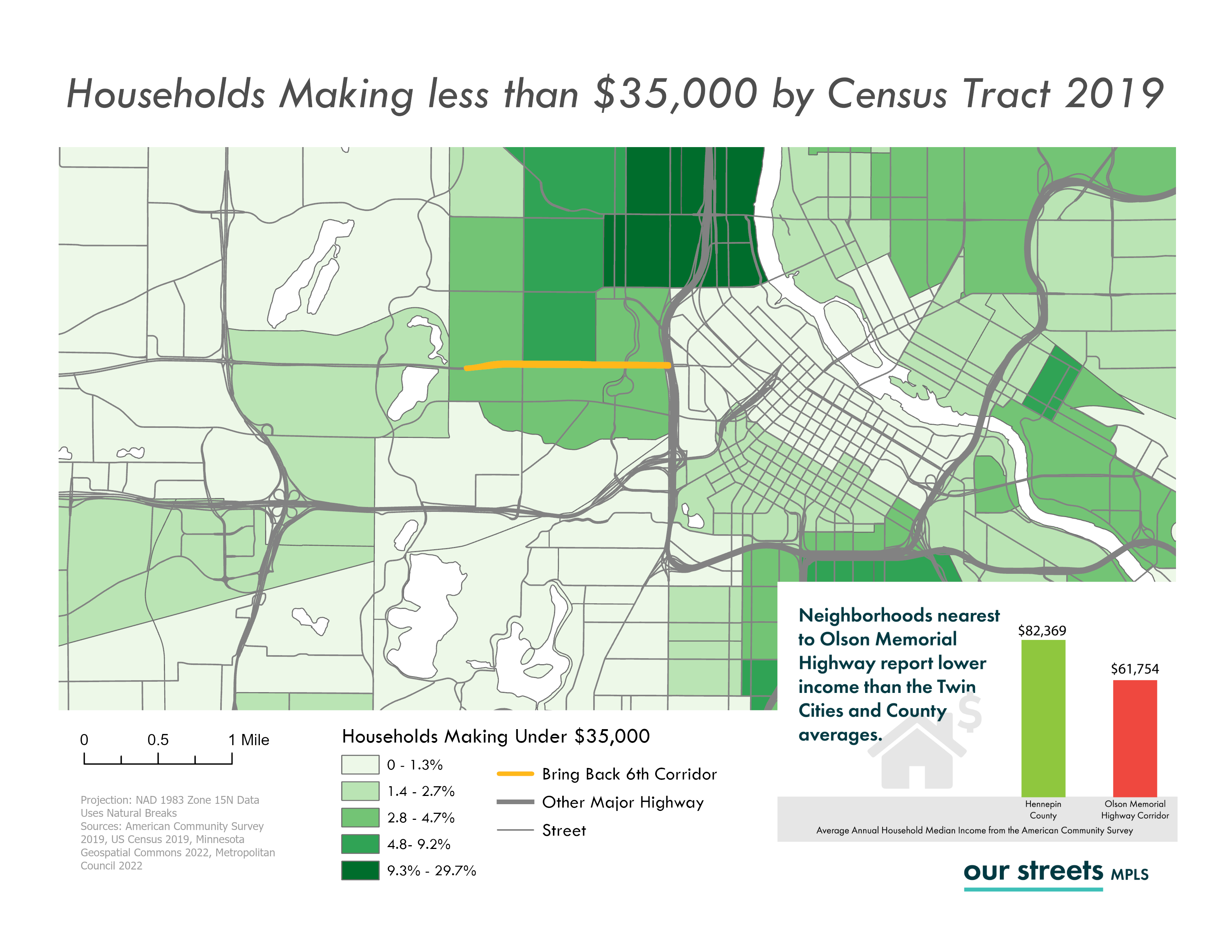 Today, there is a dire need for reparations, truly affordable housing and economic opportunity that prioritizes existing residents. Household income is far lower along Olson Memorial Highway than the Hennepin County average. By reclaiming highway land for affordable housing and business space and prioritizing local residents in project labor, the Bring Back 6th campaign aims to advance economic justice for the Near North community. 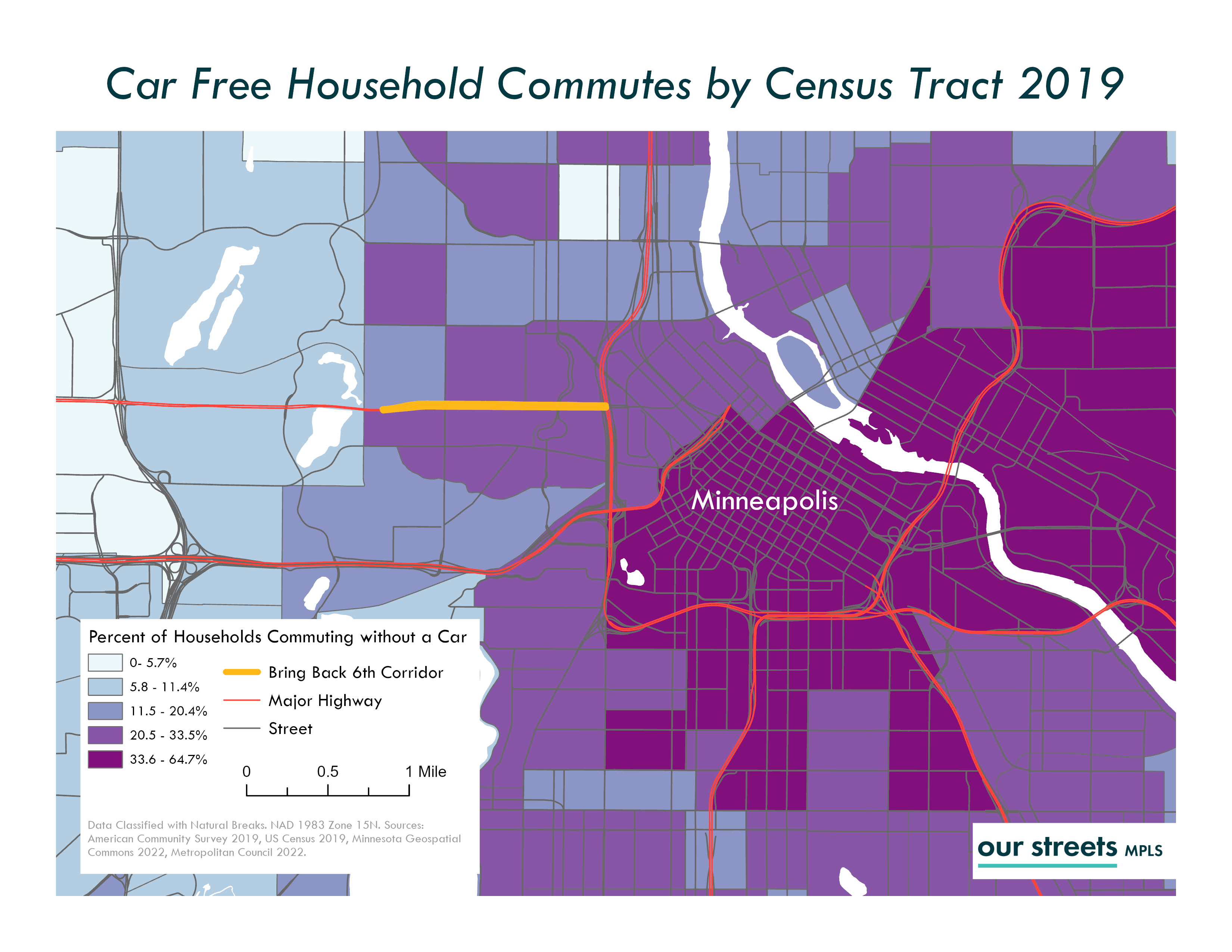 Olson Memorial Highway was built to speed up driving times for suburban commuters. It was never designed for the surrounding community and today the highway fails to meet the transportation needs of Near North residents. This is especially true for the 24% of households near the highway who don’t own a car. This includes immigrants without access to a driver’s license, people who are unable to drive due to disability and the many people who can’t afford the increasingly high cost of car ownership. The percentage of transit-dependent households in the neighborhoods along Olson Memorial Highway is three times the Twin Cities average.

For these people, walking, rolling and biking options in the corridor range from unpleasant and unsafe to non-existent. Many sidewalks and curbs are inaccessible for disabled people. Transit service is infrequent and often takes significantly longer than driving. For those who do drive on Olson Memorial Highway, the highway is equally insufficient and unsafe.

Access to quality transportation is a human right. It shouldn’t depend on one’s ability to own a car. Near North residents deserve better transportation options that are fast, affordable and convenient.

The City of Minneapolis has determined that even with rapid electrification, it won’t be possible to achieve the City’s climate goals without reducing driving by about 2% per year. We will not be able to meet necessary emissions reductions targets if the Minnesota Department of Transportation continues to double down on highways while ignoring investments in clean transportation options like walking, biking and transit.