Oak Street Bikeway: Phase One of Something Great

With the amount of cycists who use Oak every day and the vibrant area it serves, the street deserves and needs a protected bikeway. So, we're excited to have it finally installed!

However, we have seen some concerns and confusion regarding the bikeway, so we want to address some of them.

What was the process that led to the final design?

Minneapolis Public Works created a preliminary design. They then met with the Stadium Village Commercial Association to refine the design. After that, there was a public open house where anyone was free to view the layout and discuss their feedback directly with Public Works staff. We also conducted a walk-and-talk with our University of Minnesota work group to generate thoughts and ideas that were brought to the city. Feedback was also collected electronically through email. The design was then finalized and is, obviously, now in the process of construction.

Why are both lanes of the bikeway on one side of the street? 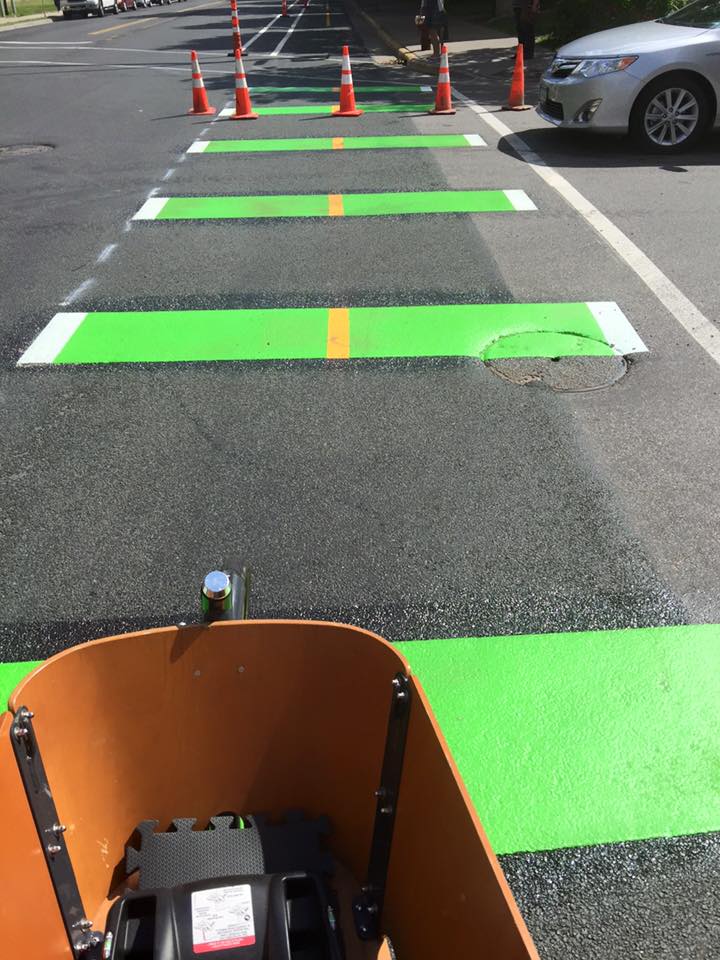 While we generally support bikeway designs with one lane on each side of the street, The two-way design was most appropriate in this case for a number of reasons. First, most of the destinations for the bikeway's users are located west of Oak Street and will generally be accessed using Washington Avenue. So, having both lanes on the left side of the street makes it much quicker and safer for people on bikes to make a left turn onto Washington Avenue. Another reason for using this design was to retain some on-street parking. Had the city implemented a design with one lane on each side of the street, two buffers would have been required, which wouldn't have left space for on-street parking. In order to accommodate the parking needs of residents and businesses in the corridor, the two-way design was implemented instead.

We'd also like to point out that the city of Montreal built a large system of two-way bikeways that has worked very well.

Why is the buffer so small in your pictures?

When we posted pictures of the bikeway, most of the buffers seen were quite thin. But, the buffers are always at least three feet wide still keep bicyclists out of the "door zone." The photos, however, only show a small part of the bikeway that is still under construction.

If you look at the overall design, most of the buffers are indeed thin. However, the important thing to note is what's next to the thin buffers. For the most part, those areas are where cars will be parking next to the lane. Those parked cars will help to protect the lane from thru traffic. Where there isn't parking, the buffer becomes wider, ensuring cars won't use the parking lane as a thru lane when it's empty.

There are also two turn lanes in the area that necessitate the narrowing of the bike lane. Fortunately, the lanes are protected literally up to the intersection, which will force turning cars to slow down and keep thru traffic out of the bike lane.

Finally, if you look at the design, you can see the buffer is thin south of Fulton and is not parking-protected. However, we were pleasantly surprised to learn that the city decided to implement a curb-protected bike lane there to make up for the thin buffer.

This is the first of its kind in the Twin Cities and will be a very (literally) solid line of protection between people on bikes and auto traffic.

Why is the southbound lane in the gutter?

To be frank, we did not expect that to happen. We will work with the city to mitigate the problems this design might create.

What's up with the Washington Avenue Intersection? 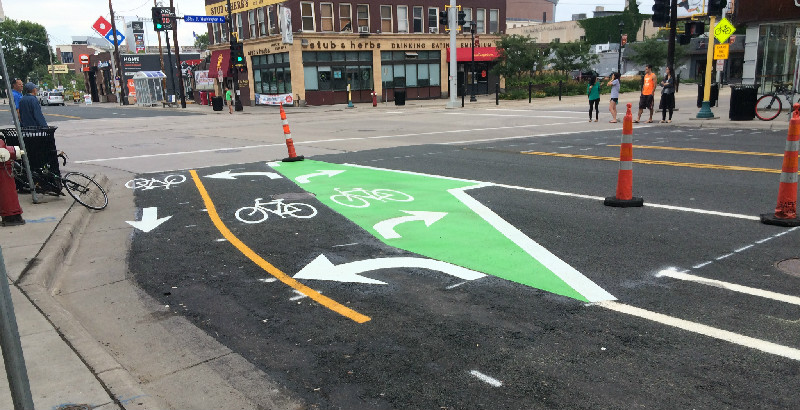 One thing we want to emphasize about this intersection is that it's temporary. This is the first phase of the Oak Street bikeway, which will eventually extend to the intersection at Walnut Street. However, until that happens, people biking need a way to get to the other side of Oak in order to continue northbound. We admit that this intersection design is very far from ideal, but it's literally the only legal way to direct people on bikes to perform this maneuver. 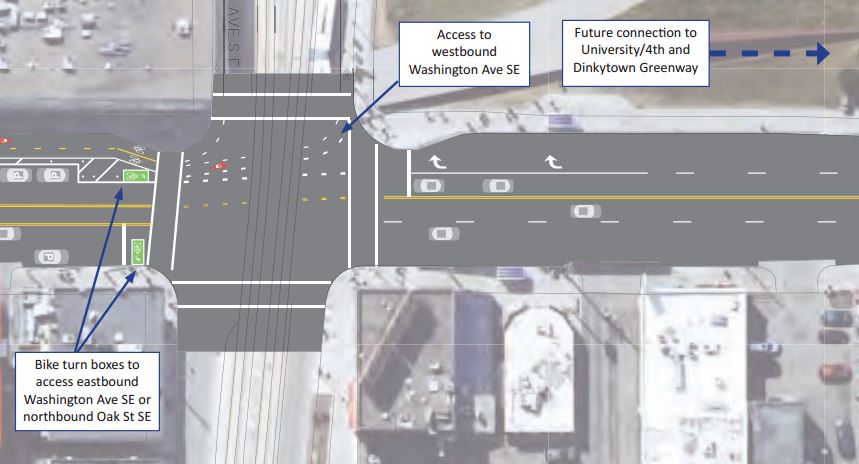 So, here's how you use it: bikers who want to go north on Oak or east on Washington should pull into the green lane and wait for an eastbound green. When that happens, eastbound bikers should merge into traffic and go east on Washington. Northbound bikers should cross with the green into the bike box that will be painted on the other side of the street. Then, when northbound Oak gets a green, the person bicycling will be out in front of traffic and ready to continue north.

Essentially, you take a right and then a left. When you are actually biking there, the intersection is actually pretty intuitive and easy to understand. And it'll be even easier once the second bike box is installed.

What if I don't want to use this bikeway?

By law, you are still allowed to bike in the car lanes if you wish to do so. There's no requirement for you to use the protected bikeway.

What still needs to be installed?

It is very important to note that this phase is still not complete. There are improvements still to come for the bikeway over the next ten days. At Fulton St, when southbound auto traffic gets a left turn phase, bikes will get an exclusive phase as well. During that phase, there will be no interference from turning cars since rights on red are prohibited. Also, more green markers will be installed as well as striping south of Fulton in the curb-protected part of the bikeway.

Even though the design is not ideal, this bikeway is still a massive improvement over the total lack of facilities that was present before and sets a good base for the extended bikeway that is called for in the Protected Bikeways Plan. We will be monitoring how the bikeway is performing and will ask Public Works to do the same.

We will also be working hard on ensuring that this bikeway is extended as quickly as possible and that the design is improved. Please sign up for our email updates and follow us on Facebook and Twitter so that we can let you know when there are opportunities for you to be involved in this work.

So, we'd encourage you to try out the bikeway now that construction is almost complete. If you have any feedback about the bikeway, please use our contact page or tweet at us. You can also contact Simon Blenski, Minneapolis' bicycle planner.

We're making progress and are excited to see how many bikeways will be built over the next five years!