After nearly two years of discussions, outreach, and education, the general layout for Minnehaha Avenue is approved. It's not all of what we'd hoped for, but it will be a nice improvement and we have a lot of other positives to take away from the effort.

Details on the decision

December 13, on an 11-1 vote, the Minneapolis City Council approved Hennepin County’s layout for Minnehaha Avenue south of Lake Street. Disappointingly, despite more than a thousand postcards, supportive comments at public meetings, and the positions of the Bicycle and Pedestrian Advisory Committees and the local neighborhood group, the layout did not include a protected bike lane.The plan the County is advancing will be one of the best on-street bike lanes in the state and a significant step up from what is there today. But it is certaily a missed opportunity for a transformative improvement for the area.

Bicycle Advisory Committee (BAC) Chair Nick Mason, Joshua Houdek with the Sierra Club, and I reluctantly sent a letter supporting this approval. We continue to believe that a protected bike lane would be a safer and more attractive type of facility than the buffered bike lanes proposed by Hennepin County, but it was clear that Hennepin County staff weren't going to support that and it was time to move on. We also want to build positive working relationships with County staff and elected officials for future planning and projects. This joint etter was quoted extensively by outgoing Transportation and Public Works committee chair Sandy Colvin Roy, and Council Member Lilligren cited it as his reason for voting yes.

But the letter didn’t just support granting local approval for a Minnehaha without a protected bike lane – it also laid out the problems with the process that ended up creating this disappointing result. Specifically, it called out three aspects of the process that must be improved on future roadway projects:

• Public process. There simply was not a meaningful opportunity provided for members of the public to impact the decisions made about Minnehaha. The process led to a lack of community buy-in and delays for the project—which could have been avoided with more collaborative and meaningful public engagement from the beginning. We hope to see future community input processes more like the approach used for Washington Avenue reconstruction project.

These concerns were cited by Council Member Cam Gordon, the lone vote on the Council against the layout approval, as some of his reasons for voting no. He also made clear that he views this decision as a huge missed opportunity. A few years from now, he said, when it becomes even clearer than it is today that protected bikeways are safer and better than unprotected bike lanes, we will all look back and regret that Minnehaha was not constructed with a protected bike lane.

What we can take away

There are certainly many positives to take away from the work on Minnehaha. Because of the public pressure for a better biking environment on Minnehaha, the design will include many of the safety features commonly associated with protected bikeways, such as green paint where appropriate at intersections and two-stage left turns. It is also important to note that the County will be greatly improving the walking environment on Minnehaha, adding new greenspace and creative stormwater features, eliminating the unnecessary extra southbound traffic lane near Lake Street, and narrowing the street and many intersections to reduce speeds (and better protect street trees). There is honestly a lot of good overall in this project even though we are frustrated on the steadfast resistance on the protected bike lane.

We hope that with the challenges of this public process--including delays and rough meetings--lead to some meaningful improvements in the County's and City's public process for future projects. We've already seen strong evidence of that with several other projects. City and County staff, bike advocates and the community at large have learned a lot about protected bikeways – we now have much more evidence that protected bikeways are safer and more attractive than we did before the Minnehaha project. 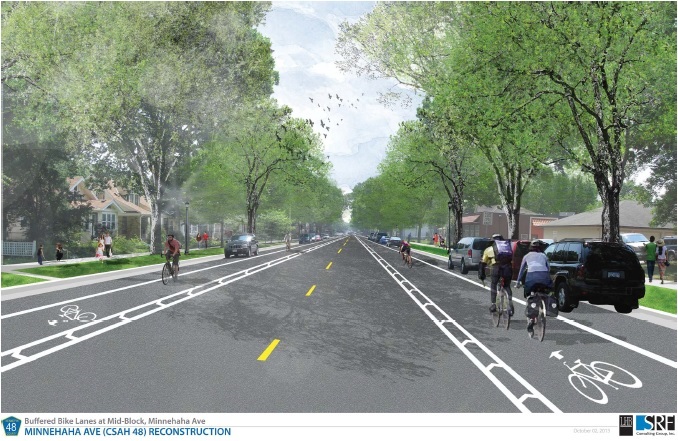 The buffered bike lanes that will be installed on Minnehaha in 2015.

Our work on Minnehaha is having real results elsewhere. Hennepin County has now decided to install protected bikeways on Washington Avenue in downtown and the Franklin Avenue bridge. Minneapolis is applying for support to build four protected bikeway projects around town in 2014 alone.

Minnehaha is a loss for the biking community in Minneapolis and especially the hundreds of families in the area we talk with who were genuinely excited by the prospect of a design that would invite them to bike more with their kids. Thank you for everyone who engaged in this effort. But our advocacy has been strengthened immeasurably by the work on this project, and we will continue to fight for a network of protected bikeways in Minneapolis – bikeways that work for everyone.