Looking Back on Lyndale 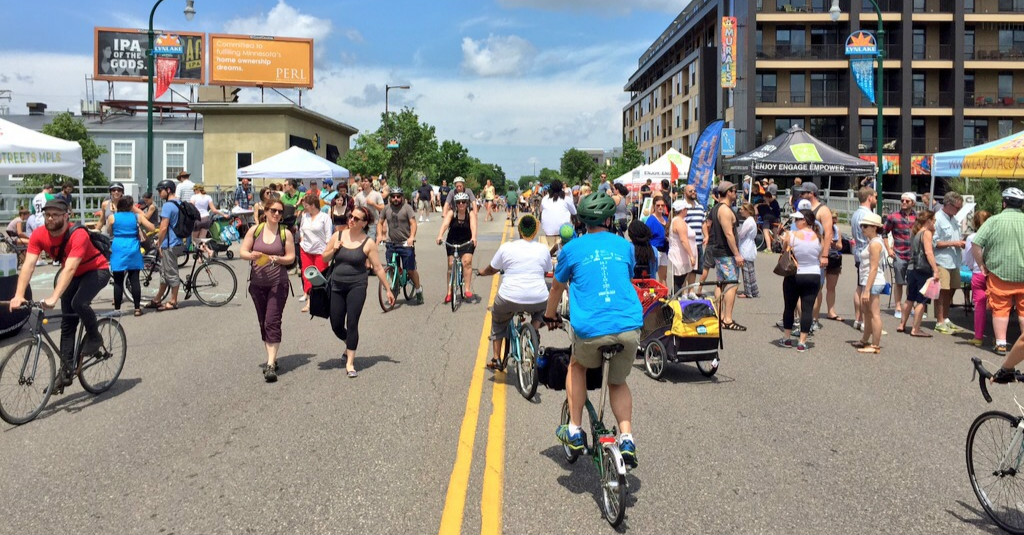 This year was the 5th Anniversary of Open Streets Lyndale. True to the last four years, this year had a massive turnout and so many community activities.

The day started with a long ride celebrating the 5th Anniversary both of Open Streets and of Nice Ride Minnesota. Both have been quickly increasing in popularity over the last five years. Then, the day was turned over to twenty-four different programmers, all from the Twin Cities community and many from the neighborhood itself.

Another popular even was street yoga. I don't think any more explanation is needed. It was great to see people enjoying Open Streets as much as they did when it was brand new.

From one event to eight, Open Streets has come a long way in the last five years. One of the event's founders, Colin Harris, who still volunteers with Open Streets, is happy with how this year's Open Streets Lyndale turned out:

The event has changed considerably since 2011. The fundamentals of the initiative, however, have not changed. We always wanted Open Streets Mpls to take place on major Minneapolis corridors on which people wouldn't typically ride a bike or even feel comfortable walking significant distances. The original route along Lyndale Avenue was over two miles - based on the success of the first few years and the buy-in from the neighborhoods, businesses and the city, the route has become institutionalized.

It's hard to describe with words the feeling of being able to walk or ride a bicycle on major, urban streets without the presence of motorized vehicles. I enjoy seeing people of all ages and abilities out enjoying the street and experiencing their city in a whole new way. I've heard stories of children learning how to ride their bike for the first time on Lyndale Avenue. I've also heard of people from older generations dusting off their bikes in the garage and riding for the first time in decades.

With the street transformed into a place for people, I like seeing the business owners using the event as a chance to do a special activity or try out a new menu, and the residents using their front yards as a place to socialize. It's fun to not have too many programmed activities, but rather have the event open up spontaneous and self-guided experiences within the context of the existing infrastructure of the neighborhoods.

People who attend Open Streets Minneapolis are there not just for the chance to exercise, but for the social part of it as well. Many people have told me that they see a friend who they haven't seen for many years, or they meet someone new while standing in the middle of an intersection. Also, people discover how quickly they can walk or bike from point A to point B - an experience they weren't open to trying before because of the typical conditions of our major city streets. Mostly, as part of experiencing Open Streets Mpls, people are able to see streets as places - as places in which they enjoy being. We begin to see what our streets and cities may look, feel and sound like in the future.

Here's to five years of transforming Lyndale, and here's to many more.