Hennepin County's draft 2040 Bicycle Transportation Plan is out for public review through December 5. You can see a great condensed summary of the 116-page plan here on Streets.mn. And send in your comments on the plan to: [email protected]

This is generally a great plan with realistic but properly ambitious targets and a path to get there. Taking that path will take additional investment. We hope the County will provide that. 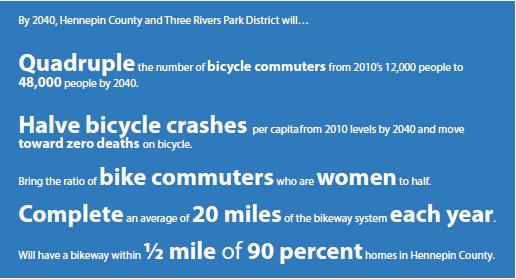 What will/should this plan mean?

Here are our complete (draft) comments...

Thank you for the excellent work of Hennepin County on the draft 2040 bike plan. We strongly support the overall direction of the plan and hope the County will make it a priority to see it implemented. Our specific comments are below.

We support vision and goals, but urge adding interim benchmarks and more timelines for actions

The plan’s identified vision and goals are strong. We feel they are achievable while properly ambitious. We are especially encouraged for the County to have a strongly stated goal of promoting biking and goals around reaching and serving all communities, regardless of current comfort level biking, gender, ethnicity, income, and age. We think it is imperative that interim benchmarks be added to the plan. 2040 is more than a generation away and things will change and evolve by then. While there are many fantastic strategies and actions in the plan, it is not clear what the priorities and timelines are for strategies and actions.

We urge the County to add interim benchmarks for 2020 and 2030, so that immediate expectations are clear and progress can be more easily evaluated.

We urge the County to identify relative priority of strategies and general timeline for actions in the plan and specific timeline for priority actions.

We also urge the County to better incorporate stated equity goals into the decision making around the plan, including project prioritization.

We strongly support identifying and prioritizing an “enhanced network”

The idea of creating an “enhanced network” is one of the best in the plan and will help prioritize the most impactful investments to serve all types of people interested in biking. We are fully supportive. We are glad that the plan includes a specific timeline to designate the network by the end of 2015. We urge the County to complete that work in time to start funding and prioritizing funding based on that network with the 2016 budget.

Resources to implement the plan

Implementation and funding details are relatively scant in the plan. It is currently not feasible to implement this strong plan without additional resources—for staff, capital costs, and maintenance.

We urge the County to make a statement that they support dedicated biking and walking funding as part of any new state or regional transportation funding source.

We urge the County to provide additional resources to implement the plan.

We urge the County to reevaluate the 50 percent local match for the gap program.

The plan rightly prioritizes connections to underserved communities, but it is deeply concerning that it does not include a single mention of the potential North Minneapolis Greenway. We recognize that this project is still in the engagement stage and will be driven by the City of Minneapolis, but the plan should include recognition of the potential project and a statement that the County will support and coordinate with the City as engagement continues and details are defined.

Flexibility in standards to implement the plan

The current State Aid Design Standards drive up the cost for the County to implement this plan as well as the cost for County street projects generally without delivering safety or mobility benefits. While we are encouraged that the plan includes an action to “Support efforts to provide greater flexibility in the application of state aid bikeway standards.” However, we urge the statement to be broader to reflect the need for greater flexibility generally in the State Aid Design Standards not just the bikeway standards. It is unclear from the current statement whether the Count will support flexibility in lane and parking lane widths and other roadway elements or just in the bike lane and path widths. We also urge the statement to be more proactive than just supporting—the County should be advocating for greater flexibility.

Open Streets and Bike Week statements should be stronger

We are encouraged to see the County interested in education and encouragement work. This is important work and the County should play a role in supporting. The County has been generally a supporter of Open Streets and Bike Week in the past, but there is only mention of sharing education materials at those events rather than the County actually being involved in proactively supporting such events. On occasion we have received concern and pushback from the County on some Open Streets routes. The County has hosted a downtown Bike Week celebration for several years and it is unclear if that will continue or not under this plan. We hope it or another effort will continue.

We urge the County to state that they will support local Open Streets events and explore opportunities to better utilize and potentially financially support Open Streets as a tool for community engagement or other County goals identified in the plan.

The plan articulates a goal of maintaining 50 percent bike ridership in the winter time, which is a great goal. But that goal is not achievable without winter maintenance. The plan says that public engagement yielded lack of winter maintenance as a significant barrier and as an important priority. While we feel that a balanced and prioritized approach to winter maintenance is sensible, it is not acceptable that Hennepin County plans to continue to leave winter maintenance of bikeways as a local responsibility even on County facilities. We are encouraged that the plan includes a strategy to “Investigate and consider a prioritized, phased snow removal policy for on- and off –street bikeways.”

We urge the County to update the plan to recognize that it will play a financial and coordinating role in working with cities and park agencies to implement the most efficient priority winter maintenance system possible.

We urge the County to find flexible solutions to ensure that winter maintenance does not limit investments in protected bikeways and other “enhanced network” connections.

• Portland Avenue around Highway 62 should be on the top-25 gap list. It is a short gap between existing lengthy facilities serving destination rich areas.

• We suggest the following changes to the planned bikeway system map:

o Generally, coordinate with Minneapolis on any changes based on their protected bikeway planning.

o Extend Franklin Avenue to Kenilworth Corridor, or at least to Bryant Avenue.

o Add 2nd and Marquette Avenue in downtown. This would recognize that Nicollet is a future streetcar route and may not be a comfortable and convenient bike route long-term.

o Add LaSalle Avenue from Grant to Franklin. 1st Avenue is only a northbound bike lane (unless Minneapolis protected bikeway plan identifies it as a two-way route).

o Add 18th Avenue NE, which is a planned protected bikeway that eventually will connect 26th Avenue N (on map) with Diagonal Trail (on map).

• On the Acknowledgements page, we are listed as the “Minneapolis Bike Coalition.” Please correct.