Franklin Ave. SE is due to be resurfaced in the next few years, from East River Parkway to the city border at Emerald St. SE. This is our opportunity to build a high-quality protected bikeway on Franklin Avenue.


We need your help!

Come to a happy hour 6 p.m. Wednesday, Sept. 17, to get more information and show your support for this project while connecting with other advocates for safer streets and connected communities. We’ll walk down the route of the proposed protected bikeway, and then talk about how you can get involved in making it happen. We’ll meet at the east end of the Franklin Ave. Bridge. After the walk, we'll head over to Stub & Herbs for refreshments and more conversation.


Why install a protected bikeway on Franklin Ave. SE?

There are a number of good reasons for installing a protected bikeway on Franklin Ave. SE: 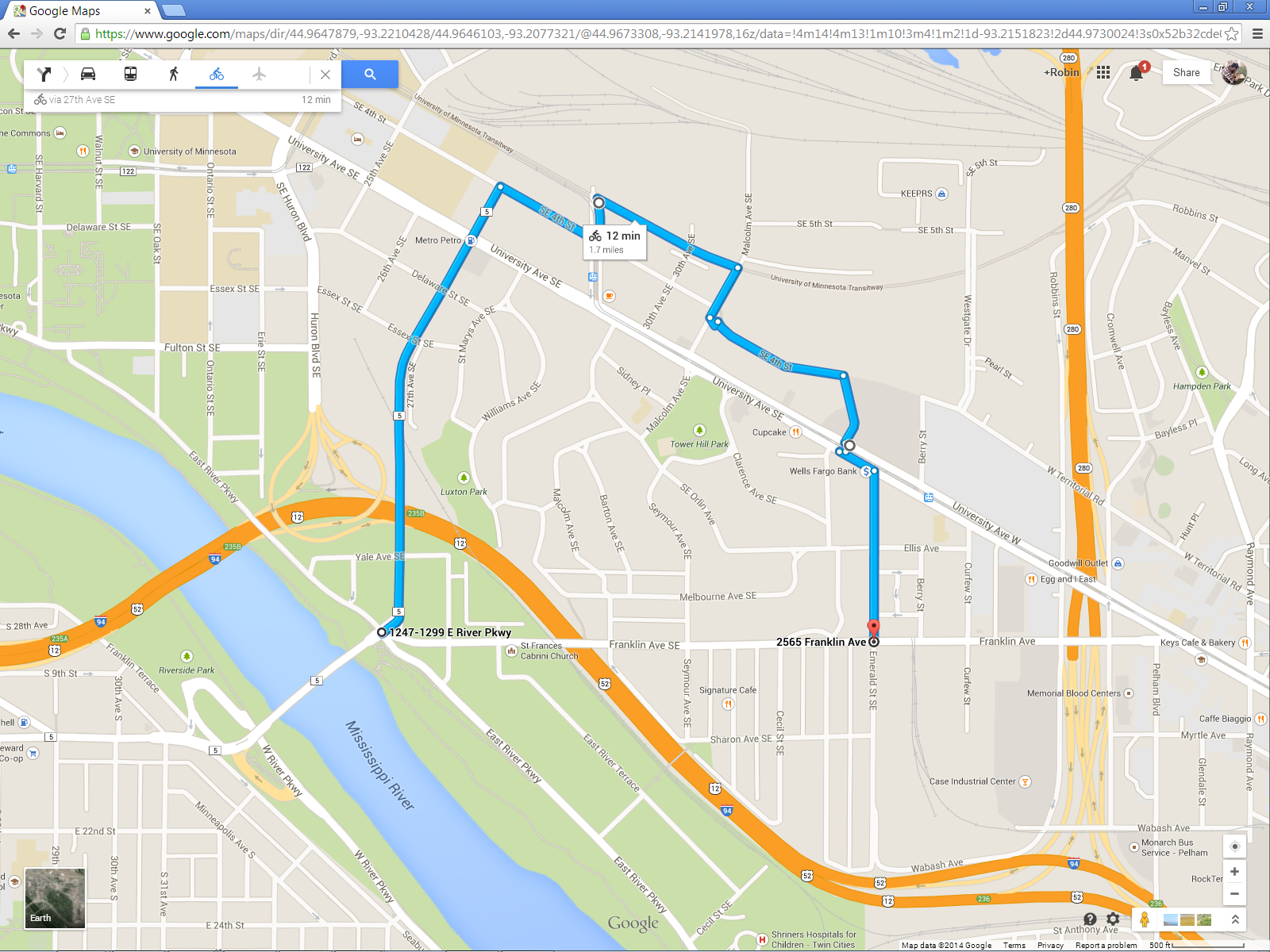 The current route from the Franklin Ave bridge to the city limit, using bike lanes. This is 1.7 miles. 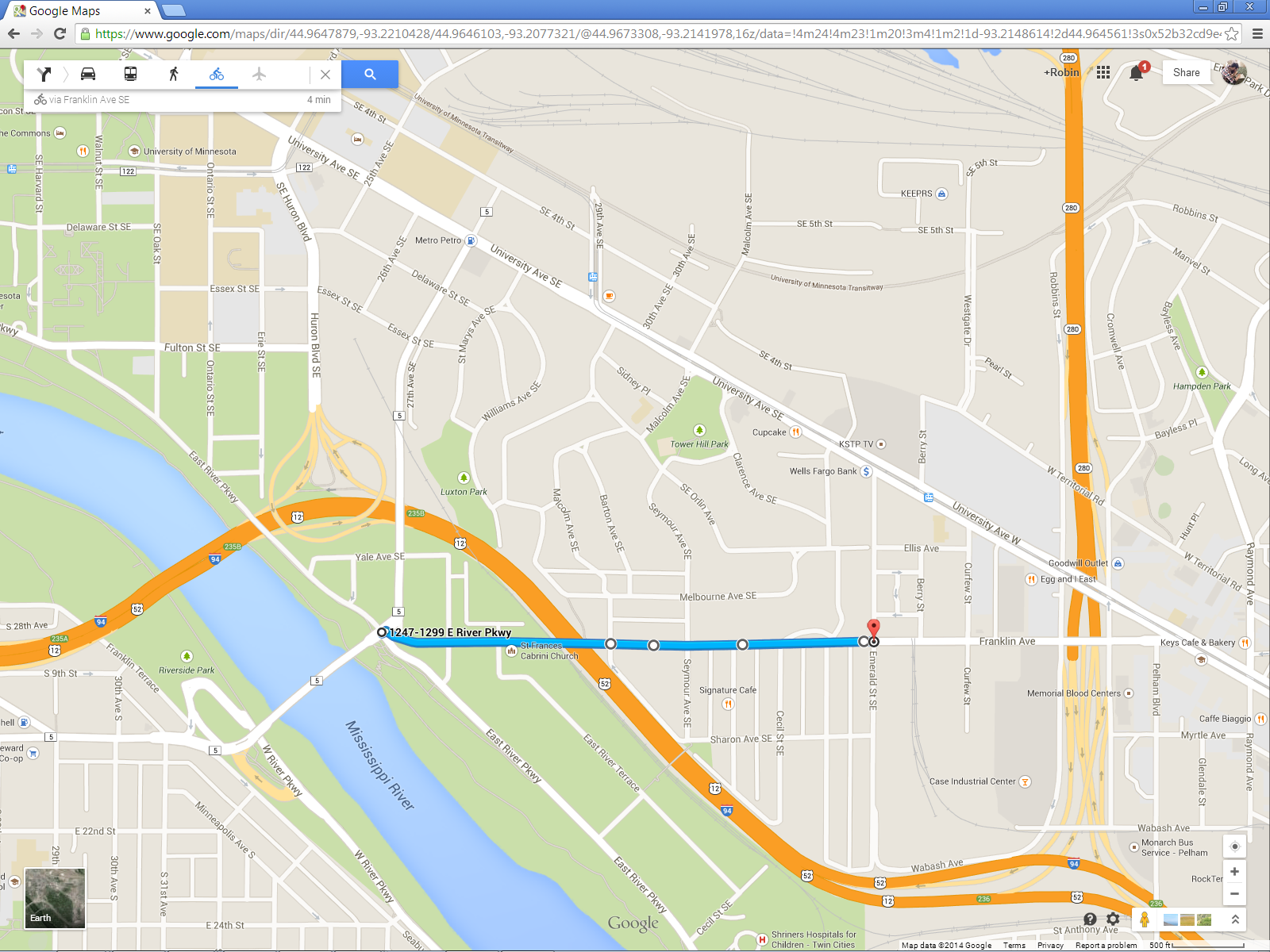 The proposed new route. This is .7 miles. The current route takes bicyclists a mile out of their way.

Connecting communities: Franklin Ave. SE makes a needed connection between the Franklin Avenue Bridge over the Mississippi River and to St. Paul. It will also be a great link between the University of Minnesota and the Prospect Park neighborhood, which is home to many University students, faculty and staff.

Current usage is high: Despite featuring a significant hill and no bicycle facility of any kind, this portion of Franklin carries 400 bicyclists per day near the bridge. This is actually higher than the bike traffic on 27th Avenue SE, which also connects to the bridge but only carries 330 bicyclists/day. Given the fact that the Franklin Avenue Bridge carries more than 1,700 riders per day, it’s reasonable to expect that a high-quality bikeway on Franklin Ave. SE will increase the number of people riding. The Franklin Avenue Bridge is slated to be retrofitted by Hennepin County in 2015 with protected bikeways, making Franklin Ave. SE a natural connection.

Traffic calming: As importantly, Franklin Ave SE has problems that a protected bikeway could help solve. It’s 32 feet wide, with parking allowed on both sides of most blocks. This means that traffic lanes are very narrow (eight 8 feet each), when parked cars are present. Few residents feel comfortable parking their cars on the street, so there is very little parking on the part of Franklin Avenue that's east of I-94. This leads to a situation in which the travel lanes are effectively 16 feet wide, which encourages drivers to speed. The protected bikeway will rededicate this underused space in a way that calms traffic.

The current proposal is to install a two-way, physically protected facility on the north side of Franklin, all the way from Emerald to Thornton. As proposed, it would consist of two five-foot bike lanes, one in each direction, protected by a two-foot buffer with a physical barrier between bicyclists and moving cars: 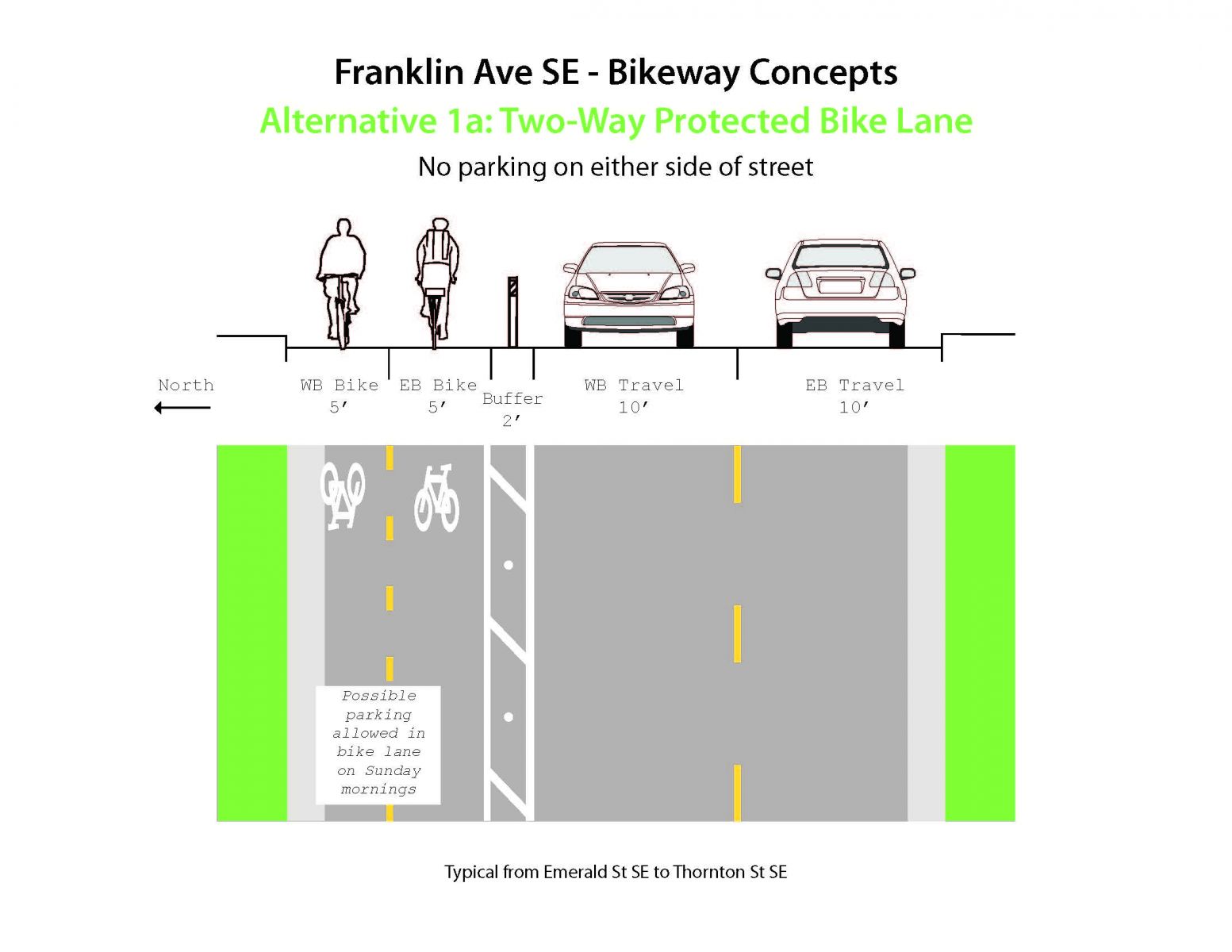 In order to build a high-quality protected bikeway on Franklin Ave. SE, the underutilized space currently used for on-street parking will be transformed into a protected bikeway for most of the length of Franklin. According to a parking survey conducted in May by Council Member Cam Gordon’s office, every residence on Franklin but one has access to off-street parking, and the on-street parking east of I-94 is used very little. While there are approximately 111 on-street parking spaces on this section of Franklin, the largest number of cars observed parked here was three. That means that over 97 percent of the space is going unused, and just encouraging drivers to speed.

There is one exception: The on-street parking west of I-94 gets used during events at St. Frances Cabrini Church. The proposed solution is to use some of the boulevard space on the south side of the street between East River Terrace and I-94, in front of St. Frances Cabrini church, for a permanent on-street parking lane, and to allow parking in the protected bike lane in this section of Franklin during peak demand periods at Cabrini: Saturday nights and Sunday mornings. These are not peak commuting periods, meaning that both traffic volumes and bicycle volumes are typically lower.


Is this project likely to succeed?

Yes. The Prospect Park neighborhood has already supported traffic calming on Franklin Ave SE, and removal of parking from one side of the street. The council member for the area is Cam Gordon, one of the most bike-friendly members of the Minneapolis City Council.

But we need your help to make this happen. There will be a public open house later this year, and we need to make sure that people who bike this route are well-represented.