I was so happy to read the news in my inbox:

Hooray!  That mudslide took out that section of trail for over two years.  It seemed like longer!  More background here. 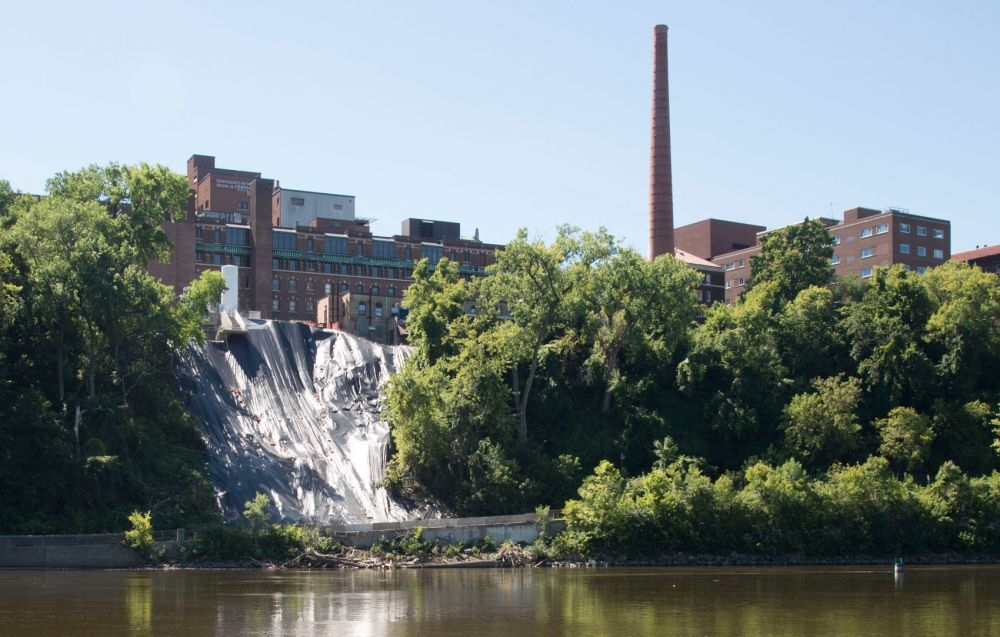 Shortly after I got even more good news:

Everything was coming up Milhouse.

The Coalition quickly assembled some friends, and we went on a little infrastructure tour.

We zoomed down the Parkway to the mud slide site. 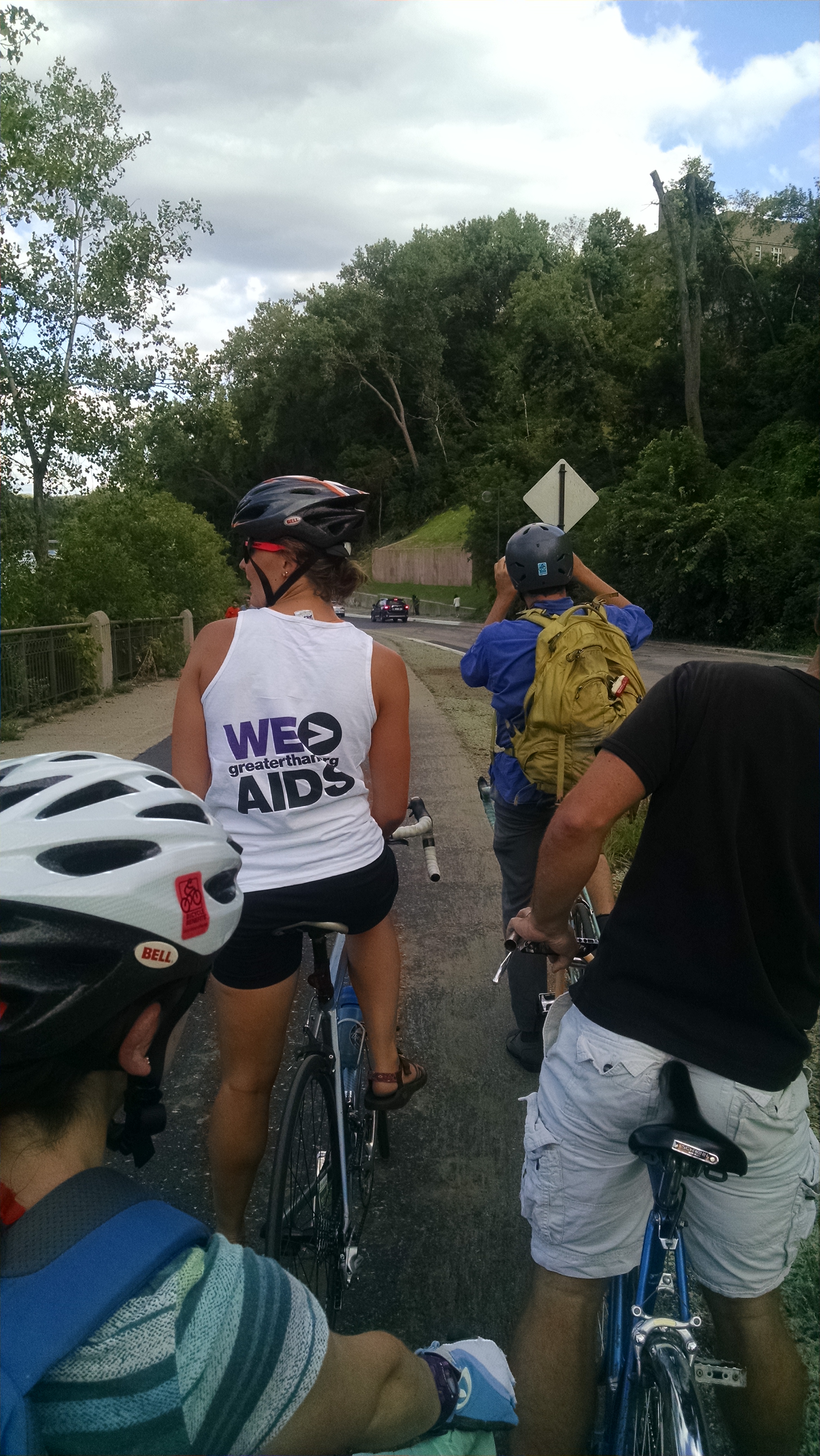 Look at these infrastructure tourists!

I stopped to take a photo of the new retaining structure as well... 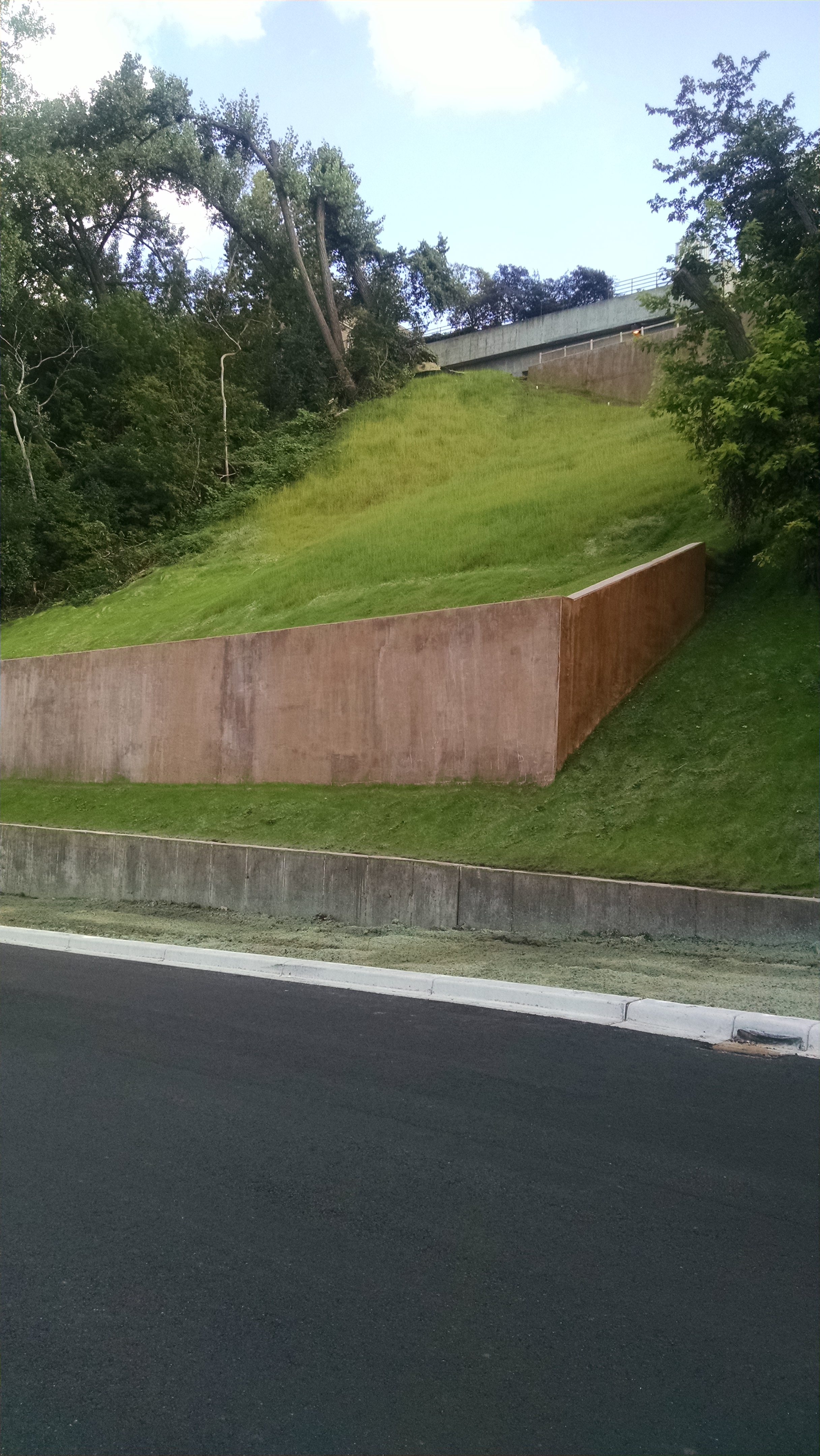 We climbed back up to the Franklin Bridge to find only HALF of the pedestrian/bike lanes were open.  Construction employees said they would be that way for awhile, but I don't have a date when the bridge will be fully open.  Both car lanes, however, were open.  Thanks to Jeremy W. for this awesome panoramic shot, showing the south side of the bridge going west bound is closed for bikes and peds, while the north side of the bridge going east bound is open.  It is similar to how the construction work had bike lanes closed on half the bridge for most of the summer.

The Franklin Bridge still looks creepy with the catwalk under the deck and some construction materials and equipment around, but it is open! 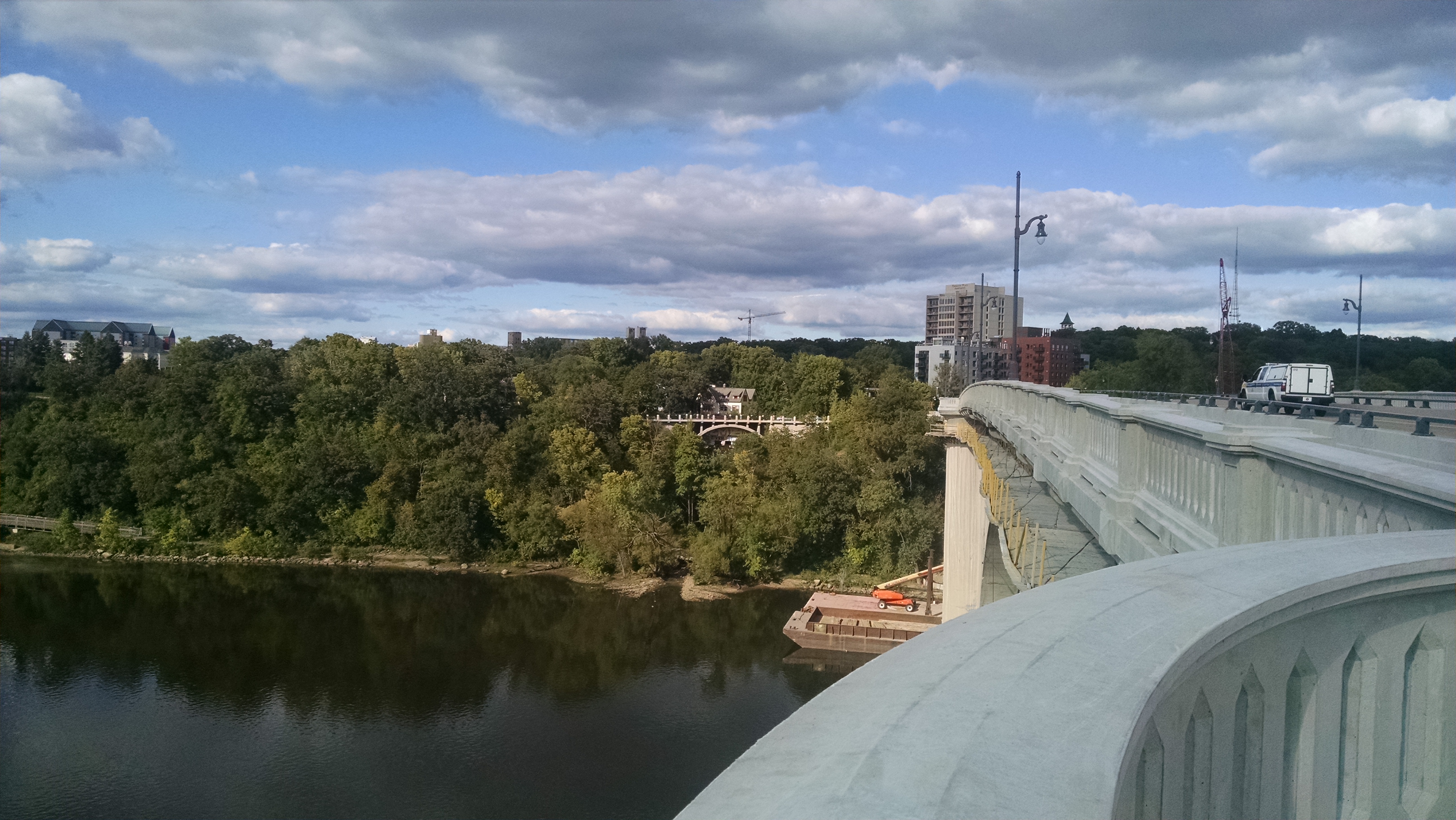 There were so many friends and neighbors checking out the bridge!  We only rode up with five people, but after a few minutes we had an impromptu meeting of pedestrian advocates, bike advocates, a city council member's aide (Robin!) and the Mayor's aide (Peter!), along with some handsome dogs out for a stroll.  I love living in a city where walking and biking are easy and fun.  It's a great way to see your neighbors on a beautiful evening. 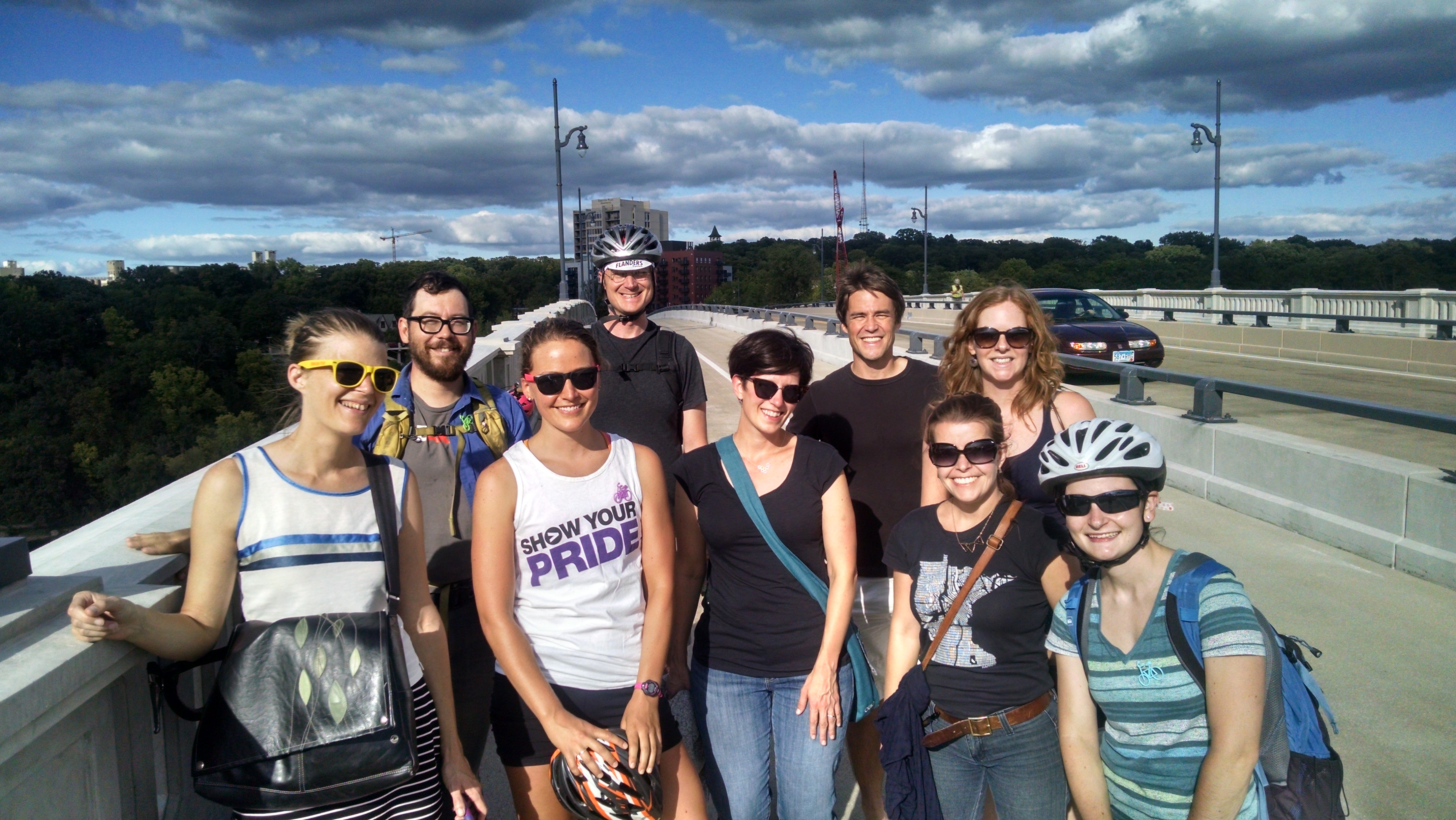 1. If you want to continue on Franklin, you stay in the bike lane and it continues around the curve meeting the light on 31st. (On the left hand side of the photo.)

2. If you want turn across car traffic, say you want to go south on the West River Parkway, you follow the bike in the right of the photo.  You then turn left on the far side of the planted median/that orange netting.  You can see where there is a bike and pedestrian crossing.  This move is helpful so you are squared up to traffic with great sight lines. Something the previous alignment, with its ambiguous lane boundaries, definitely lacked. 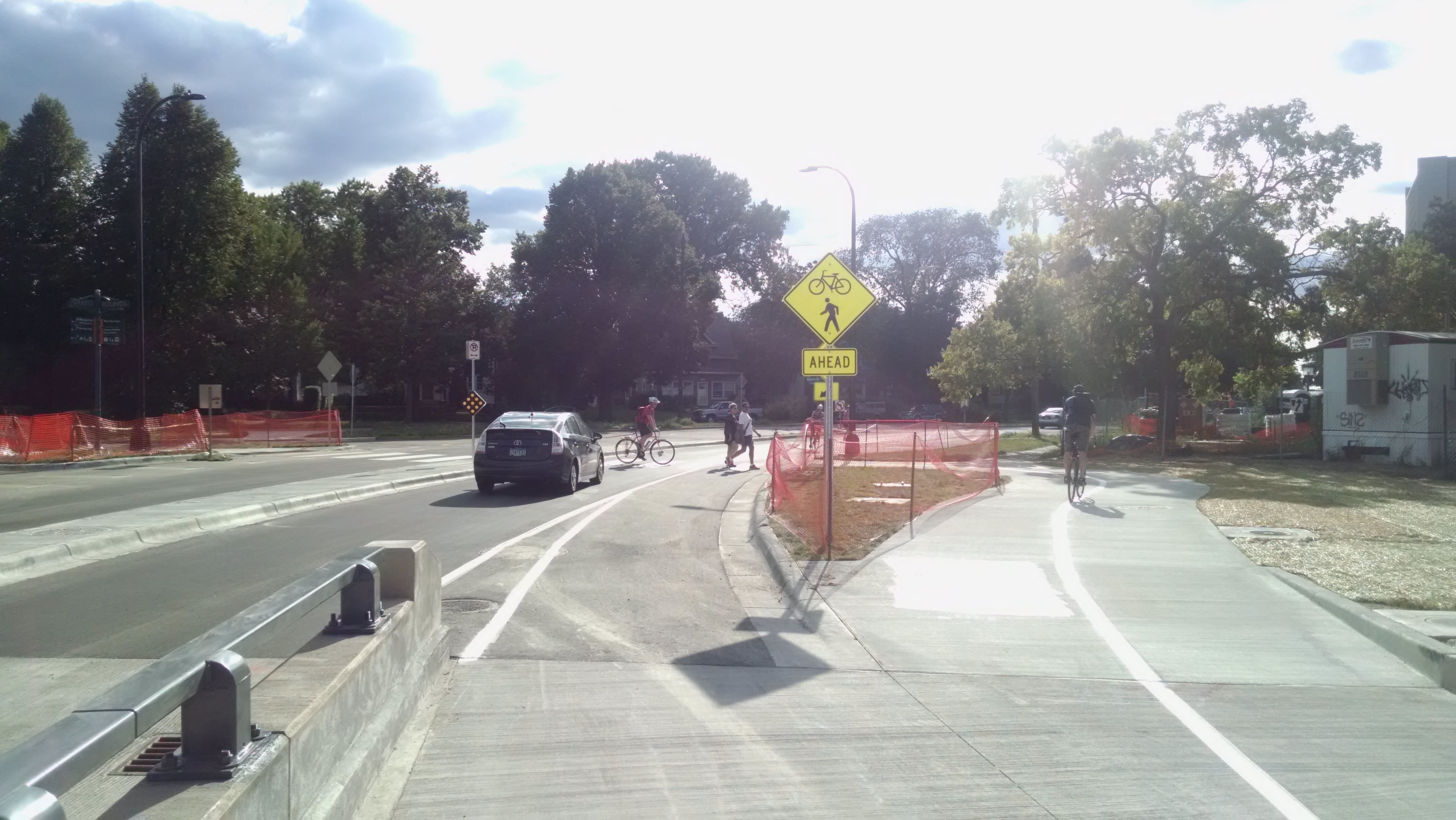 If you stopped by during Franklin Open Streets, you hopefully supported our Bikeways for Everyone campaign for a safer, more accessible Franklin Ave.  We were asking people to support the following vision.

1. make all sidewalks meet the needs of everyone, including people in wheelchairs and pushing strollers

3. add a left-turn lane, with one traffic lane in each direction, west of Chicago Ave.

In addition to the Franklin Bridge opening and including protected bikeways, there continues to be progress on the Cedar Ave, Franklin, and Minnehaha Ave intersection which will include bike lanes to Bloomington Ave. There will also be a celebration in October for the new bike counter which will be installed on Franklin Bridge- the first of its kind in Minneapolis!

We will be sure to keep in touch with you about these updates as they come in the next year.

If you are interested in getting involved, please sign up to be a volunteer, or join our Monthly Get Together on the 3rd Monday of every month! The next one is on September 19. We'd love for you to join us! Click here for information on membership.