The City Council will approve a final design for the redesign of 3rd Avenue on April 15, including the addition of a much-needed protected bikeway in downtown. While the protected bikeway thankfully is not in doubt, the details of the final design have brought forward a decision on the balance of greening, safety, and auto access. Here are some details and our position. 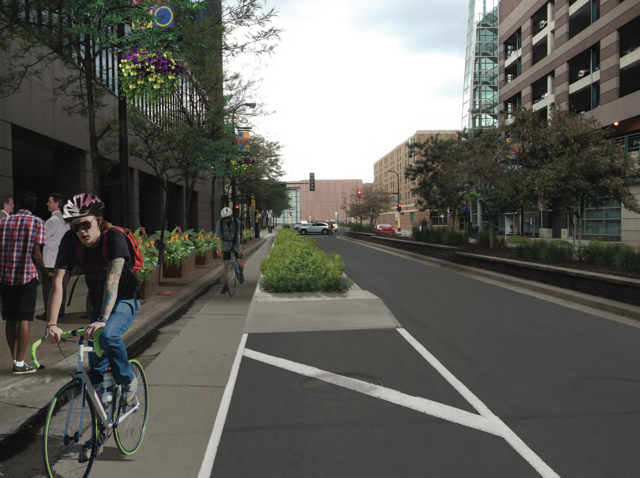 The City Council approves the final design of 3rd Avenue. They can take the staff recommendation or go a different direction. The Transportation and Public Works Committee will discuss the design on Tuesday, April 5 at 9:30am (City Hall 317). The full City Council votes on it Friday, April 15 at 9:30am. Community members are encouraged to attend, but testimony from the public is unlikely.

In October, the Public Works Department released an originally recommended design for 3rd Avenue that included protected bike lanes, 10% more greenspace, and a balancing of traffic demands. The proposal had two parts:

April 1, Public Works publicly released a revised recommended design for 3rd Avenue. This is four days before City Council will consider it. Most of the changes are south of 7th Street where they eliminate green medians and planters along protected bike lanes to maintain a fourth traffic lane throughout. The change in recommended design came at the request of local building managers, who are concerned about traffic delays, and Council Member Goodman, who is supporting their input.

Summary of Differences in Pictures... 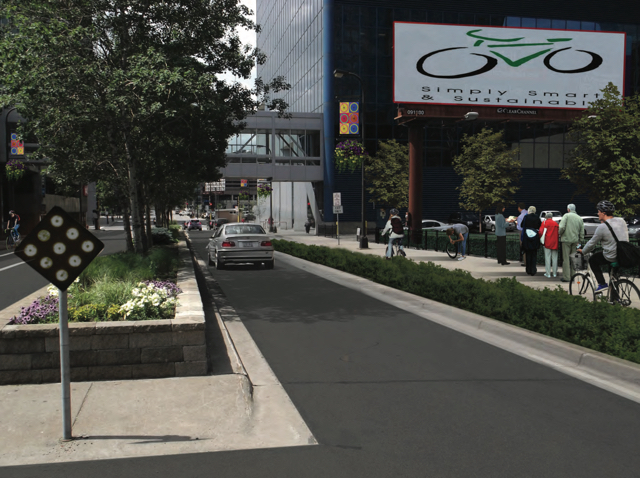 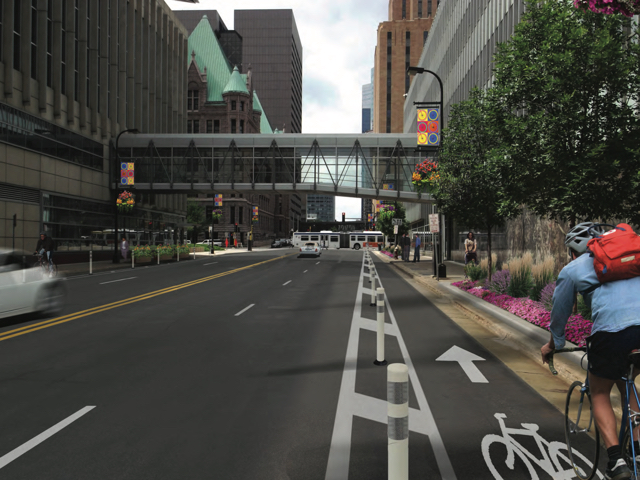 Full Differences Between the Proposals

Public Works has said that both the original and revised design are manageable and choice is between more greening (original) and more local traffic access (revised) between 7th Street and 16th Street. The original is also almost certainly the safer design because of inherent safety challenges of 4-lane undivided streets. Full differences:

We Support the Original Proposal

We have worked hard to build support for a north-south protected bikeway in the heart of downtown and we are glad to see that moving forward. We thank the Mayor, all City Council Members, and all the stakeholders who are supporting that addition. While we recognize that the revised proposal retains the protected bikeway, we believe the original proposal is the best proposal for downtown and we support it.

We support the original proposal because it:

You can sign this petition (now with 450 names) from the Minneapolis Pedestrian Alliance to offer your support for the original proposal + needed walking/greening improvements along City Hall block as well. You can also email your Council Member.

Other positions on 3rd Avenue

We are open to a test pilot

We always hope to find a common design solution that most stakeholders support. We thought the original proposal (already a compromise) could do that, but think the process around it stood in the way (people don't like being surprised about their street).

We are open to the idea of doing a test pilot of the original given the concerns on it "working" for traffic. Test out the layout for a year and see how it works then make it permanent or change if needed. Public Works has said that is feasible, although it may be better to just make a decision based on the facts available.

They did a not dissimilar test on Riverside Avenue in 2010 before it was reconstructed. It worked, so it is now a 3-lane street rather than the 4-lanes it was previously. (Riverside, incidentally, carries up to about 13,000 cars per day compared with the about 9,000 on 3rd Avenue south of 7th Street and saw more than twice as many bicyclists last year as 2009, the year before bike lanes were added.)

History/Process (If you want more background)