Thank you to Anna for taking the notes for this blog and to Sara for serving as photographer.

This May evening was as beautiful as April was snowy (catch up on our April work here). All the Dunn Bros bike racks (and sign posts for half a block in every direction) were filled to overflowing by the time the 12 of us all got settled. Our crew grew again, with three new people joining us (welcome Jesse and Nicky and Aaron).

We’ve finally settled on a standing meeting time: the first Monday of the month, from 6-7:30. Put June 4th on your calendar (but note that in July we’re postponing by a week due to the 4th of July). Come join our mighty band of organizers! 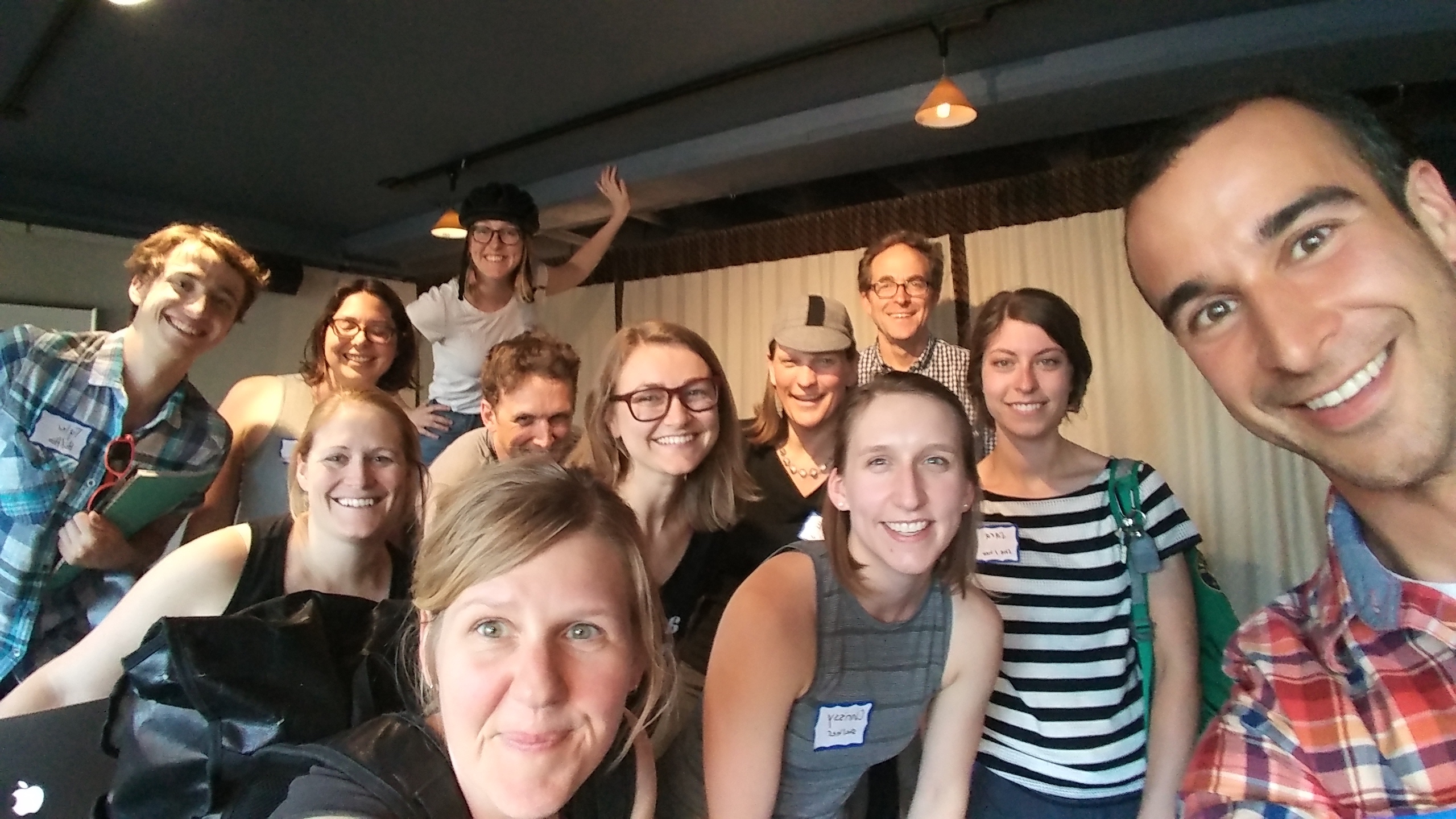 While introducing ourselves, we shared what inspires us to volunteer with this downtown bikeways group. The answers varied from wanting a safe way to get home, to wanting co-workers to feel safe riding, to hoping to share the joy of riding a bike with neighbors. Before we dove into an update on what we’d done since our previous meeting, we reminded ourselves what we’re trying to accomplish:

We aim to showcase the demand for safe, protected bikeways on two downtown Minneapolis corridors that are included in the City's Protected Bikeway Update to the Bicycle Master Plan but not yet implemented. The first is north/south from downtown to Whittier on LaSalle/Blaisdell and/or First Avenues, and the second corridor is east/west across downtown on 9th and 10th Streets.

We start our meetings with updates from the corridor work groups, and they have been busy!

We took a slight detour into traffic counts, and parking, and Janne gave a mini history lesson about what's possible. She shared how Amsterdam used to be very car-centric - but record numbers of deaths of people walking and biking, and especially of children, prompted widespread protests. People demanded safe streets for walking and biking, leaders listened, and now everyone bikes. Check out these pictures of the same spot in Amsterdam (there are more examples at the link above).

That opportunity exists for us in Minneapolis, too.

Then, we dove into the details. After two months of work, each corridor group has a few plans underway. We asked, “What is your challenge to get your event planned? What do you need?” using a Peer-to-Peer Consulting activity. Everyone broke into groups of 3 to discuss the events planned by the two corridor groups. 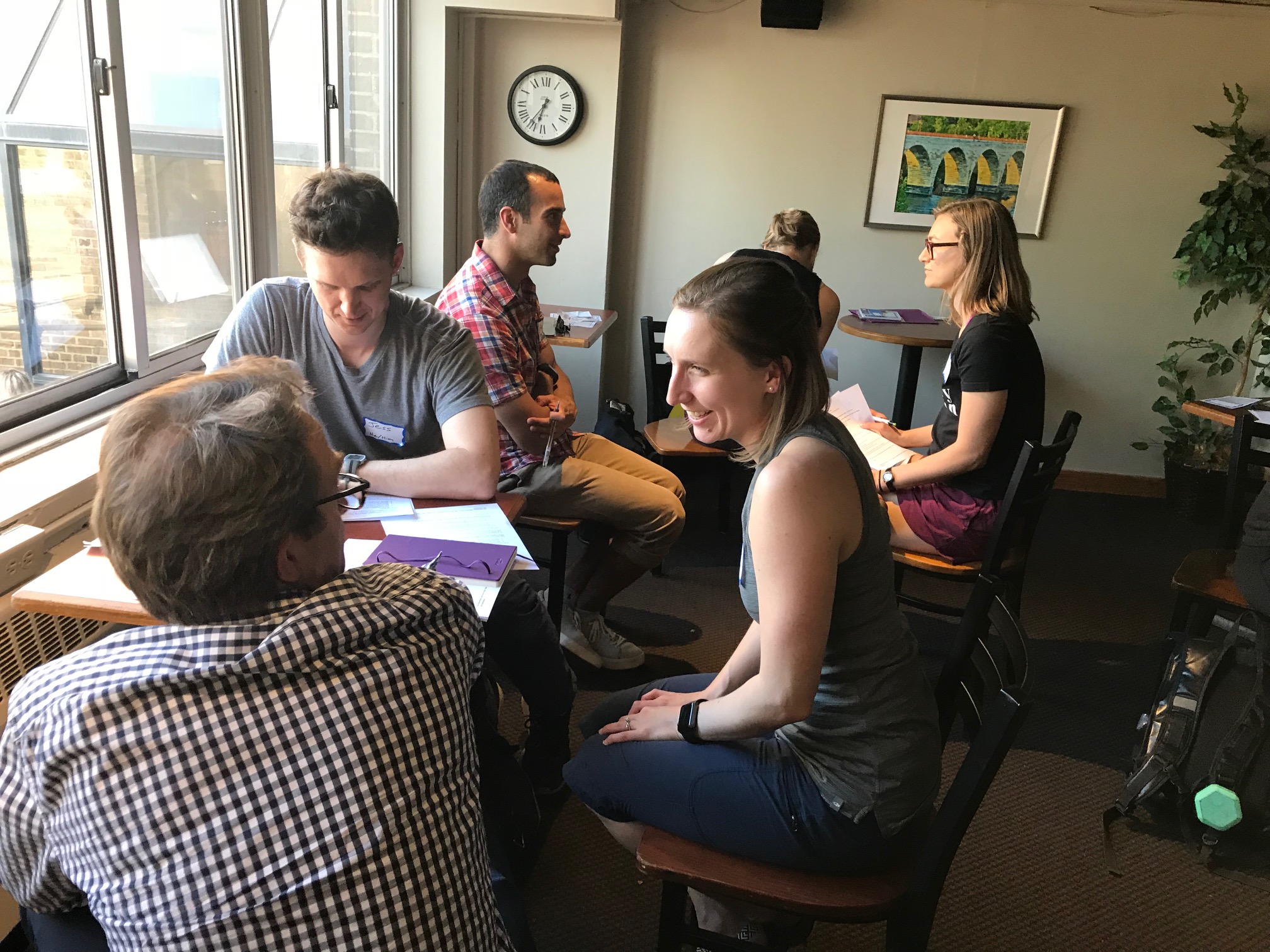 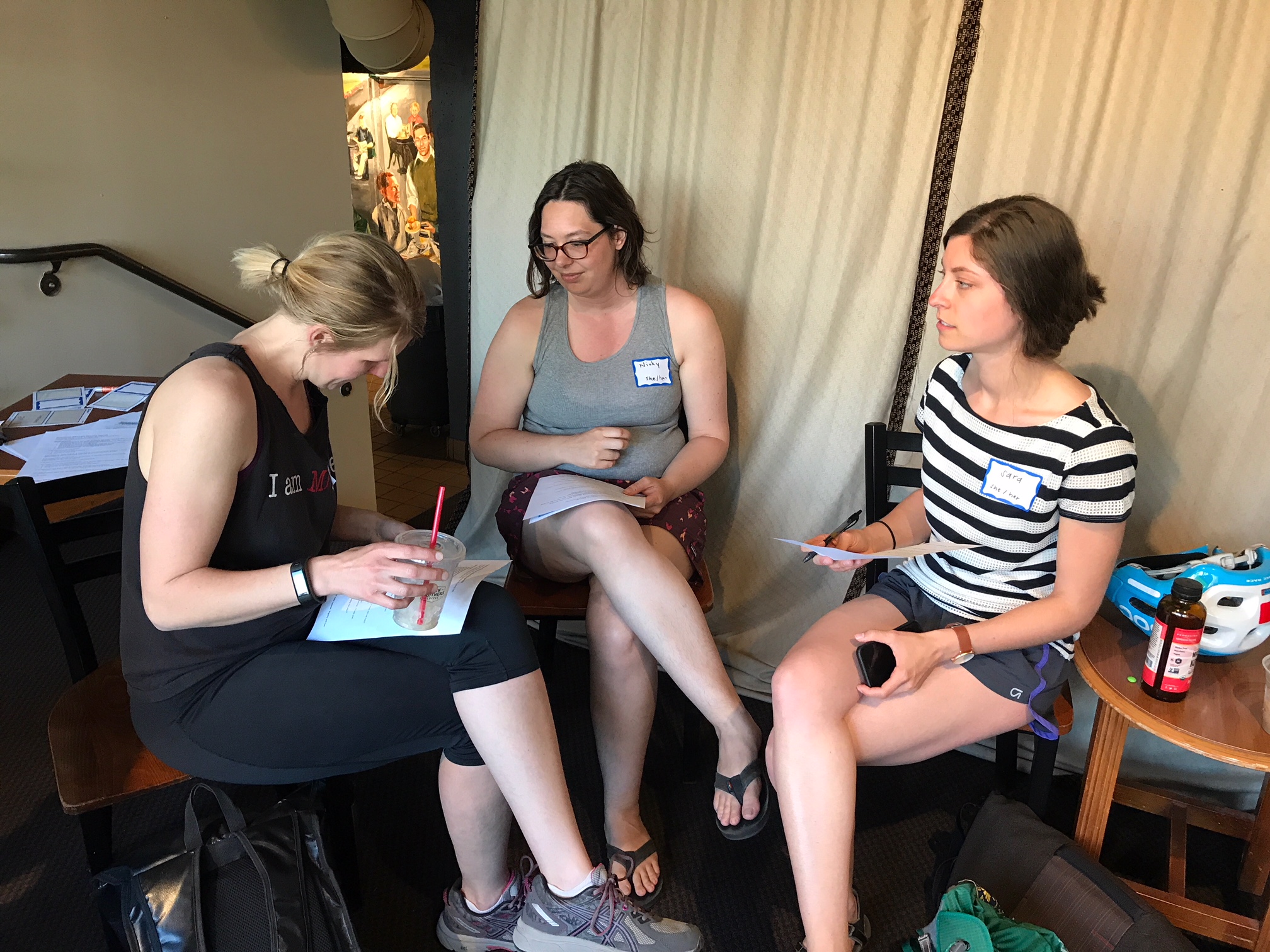 Armed with those ideas, we regrouped with our corridor teams to update our plans, discuss the events, set dates for events, and map out who is going to do what by when, before reporting back to the whole group.

Before we headed out, we confirmed we’ll meet on June 4th, 6-7:30pm at the Dunn Bros in Loring Park (329 W 15th St), and that we’ll postpone July’s meeting until the after the big holiday, gathering on July 9th. (Come join us, and e-mail [email protected] or show up 15 minutes early to get plugged into a work group.)

We also took a couple minutes to share what we’re taking away from the meeting, or what we’re reflecting on. People shared their growing hope for making real change, wondered how to translate our activities into change, and expressed excitement that so many people are willing to work together to make downtown protected bikeways a reality. And Sara wrangled us to take a whole-group selfie before we headed out the door.