Constructing Penn Ave N for the Next 60 to 70 Years

In coming years, Hennepin County will be reconstructing Penn Avenue North. In the next week or so, critical decisions about the design of the project are being finalized.

On Tuesday, July 28, the City's Transportation and Public Works Committee had a discussion on the Concept Plan for the Penn Ave N corridor and Queen Ave N Bicycle Boulevard Concept Plan. We have blogged about some of these plans previously.  Specifically, Public Works brought forward an option with no bike lanes on Penn, with an alternative bicycle boulevard on Queen Ave N.

Hennepin County has been conducting a multi-year community engagement effort on Penn Ave N as a Community Works project to solcit feedback about potential economic development, roadway, and livability improvements along the Penn Avenue N corridor. The Community Works Project is a joint planning effort with Hennepin County Community Works, the city of Minneapolis and Metro Transit to improve livability through the redesign of the roadway and public transit. The project area stretches from Interstate 394 to 49th Avenue North. At the heart of the project are key intersections targeted for redevelopment at 44th Ave, Lowry Ave, West Broadway Avenue, Plymouth Ave, Golden Valley Road and Glenwood Ave. Many of the intersections are future stops on the C Line, a bus rapid transit project from Brooklyn Center to downtown Minneapolis via Penn Ave.

The policy body for the Penn Community Works Project (Penn Avenue Steering Committee) ended up voting to reject plans which incorporate a bike lane on Penn, including a "hybrid" option that would have included a bike lane on Penn for half of the project and a bicycle boulevard on Queen for the other half. Council Member Yang and Council President Johnson both supported the hybrid option.

Parking on both sides, no bike lanes, uses existing 58' right-of-way. 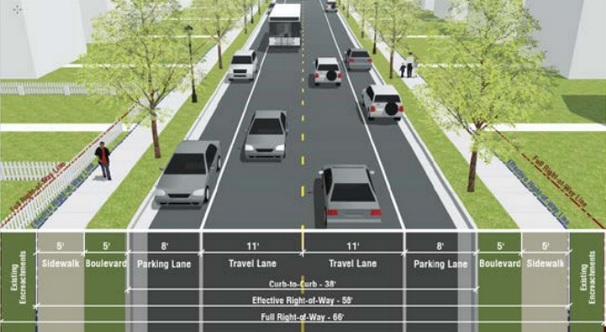 Parking on one side, dedicated bike lanes, uses existing 58' right-of-way. 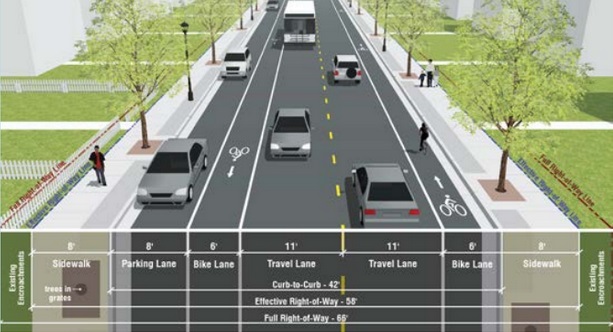 Voted for the Hybrid Option: 4 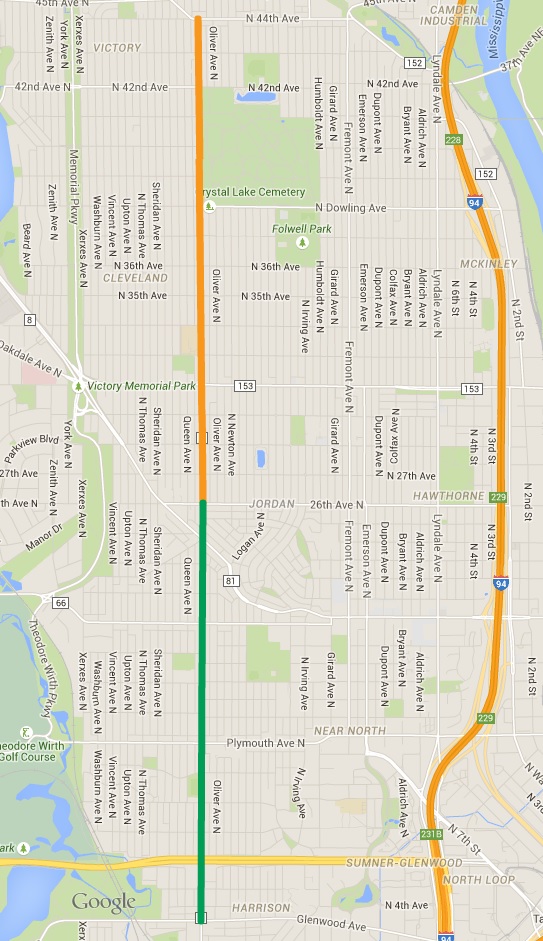 I personally attended and spoke at the Penn Avenue Steering Committee meeting where the committee voted for no bicycle lanes on any stretch of Penn Avenue North. There were concerns regarding the need for parking on both sides of Penn Avenue North (even though data shows parking is under utilized), the erratic behavior of bicyclists (bicyclists and motorists ignore laws at the same rate), and about where to put snow because after all we do live in Minnesota. From what I could gather, many on the committee members or persons who influenced the committee live in the suburbs but have business interests or offices in North Minneapolis and were applying suburban traffic infrastructure and lifestyle principals to an urban area. North Minneapolis residents on the committee were dipping into childhood memories where parking was at a premium in North Minneapolis.

It was interesting to note that both City Council Members Yang and Johnson favored a plan that would at least have bike lanes on Penn Avenue from Glenwood to 26th. So here again we have Hennepin County opposite of Minneapolis bicycle infrastructure requests. I believe Council Member Yang and Council President Johnson see North Minneapolis falling even further behind the other quadrants of the city in terms of bicycle infrastructure and other amenities that would attract and retain younger residents in North Minneapolis. Ironically, after the bicycle lanes vote was taken, there was a Powerpoint presentation from a staff person regarding how difficult it is to attract developers to North Minneapolis (see Finance and Commerce's article on the project's outlined challenges to development on the corridor: http://finance-commerce.com/2014/11/big-dream-planned-for-penn-avenue/).

Part of the fallout from that Steering Committee decision was a request to sort out a bicycle boulevard on Queen Ave as an alternative. Since the beginning of the project, it's been known that Queen Ave N had many hurdles to being an effective bicycle boulevard--no intersection across Broadway, it is currently a one-way street for more than a mile, two parks with no bike access through, difficult crossing at Lowry. The challenges on Queen were part of why we've been so consistent in support for bike lanes on Penn, despite concerns over parking removal.

County staff (with the support of the City staff) worked hard to try to sort out a viable design for a bicycle boulevard on Queen. Local advocates, residents, and the City of Minneapolis' Bicycle Advisory Committee were opened-minded while recognizing the challenges. In the end, all parties just felt there were too many challenges that the County has not been able to come up with great solutions for; and, as such, we do not support Queen as proposed. We just don't think a bicycle boulevard on Queen would serve people biking well, and that approving it would also certainly shut down any potential future discussions on bike lanes on Penn Avenue and also means it is very unlikely that a bicycle boulevard would be put in on Thomas Ave N (a superior route and currently on the City of Minneapolis' Bike Plan).

My initial hope was that the Queen bicycle boulevard would just die without a Council action. But given that municipal consent is also being asked for Penn, I think it may be appropriate for the Council to vote down the Queen bike boulevard while begrudgingly offering municipal consent on Penn with the hope of revisiting how to serve people bicycling in the corridor.
We are advocating for the equitable distribution of bicycle infrastructure and bicycle-related resources that adequately and thoroughly serve the bicycle needs of Northside residents

Given the many challenges Queen Ave N poses to being an effective bicylcle boulevard and the hope for a better bicycle boulevard on Thomas (3 blocks away) or potentially a future re-opening of the Penn Ave bike lanes discussion, local advocates and residents do not support the Queen bike boulevard. North Minneapolis needs to look like the rest of Hennepin County and offer the safest bike lane designs available to our residents. We need to take advantage of the cost savings that we have before us today in our comprehensive Penn Avenue Community Works Project to construct the most modern "Complete Street" transportation facility that will support ecnomic growth and serve all users, bike, pedestrian, bus and other motor vehicles on Penn Avenue in North Minneapolis for the next 60 to 70 years.

Local advocates, North Minneapolis Bicycle Advocacy Council (NMBAC), and North Minneapolis residents have been vocal about rejecting the Queen Avenue N Bicycle Boulevard as proposed by Hennepin County Public Works.  We are advocating for a demonstration segment of buffered bike lanes and alternating parking in the short-term along the Penn corridor.

For more info on the project, please visit: http://www.hennepin.us/residents/transportation/penn-avenue-community-works