Discussing the public meetings about the Minnehaha Avenue redesign took up most of the meeting. Some committee members were caught off guard by the "open house" meeting last Thursday when they discovered the event would feature a long presentation and a constricted format for providing feedback. Regarding the content of the presentation, many in attendance echoed Ethan Fawley's criticism of the county's assertions about protected bikeways (also known as cycle tracks). Many studies over the last few years have shown that protected bikeways enhance safety and increase bike ridership. Many reasonable alterations to the proposal could minimize the tree loss in the protected bikeway configuration of Minnehaha. Surely, the county can design a better cycle track than the one in the current proposal. Grant Boelter recently wrote a great blog post debunking myths about cycle tracks.

A BAC member who attending the county's meeting with the Longfellow business community reported that some business-owners were misinformed about how the cost of the project will be borne. As councilmember Cam Gordon clarified at last week's meeting, the funds needed to rebuild Minnehaha Avenue will not be directly assessed from the local residents and businesses.

The engineering subcommittee reinforced points that the Minneapolis BAC has made in several memos: protected bikeways are safer for cyclists, pedestrians, and even motorists. Protected bikeways also boost the local economy. A well-designed protected bikeway along Minnehaha Avenue would best serve this thriving street. 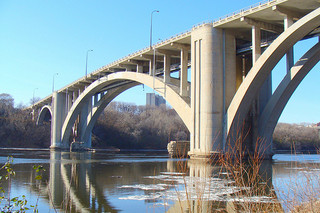 A protected bikeway could be headed to the Franklin Avenue bridge, according to a team of county engineers. The bridge, officially named the Cappelen Memorial Bridge when it was completed in 1923, is named for its designer, Frederick William Cappelen, the Norwegian-born architect and civil engineer who also designed the Witch's Hat and the Kenwood Park Water Tower. The favored plan, of more than two dozen alternatives, includes two one-way cycle tracks on each side of the bridge and new outer railings that would draw inspiration from the original design. The engineers want to ensure that their design does not preclude any future improvements to intersections on either end of the bridge, but in order to secure $12 million in federal funds for the project, the planners need to move fast.

Send an e-mail to Shaun Murphy, the city's bicycle and pedestrian coordinator, if you'd like to come to a BAC meeting.

Photo of the Franklin Bridge by Flickr user dwallick.