Quick, what do San Francisco, Austin and Indianapolis have in common? I know it is tough to image, but actually, all three cities are demonstrating protected bike lanes can be incorporated into streets while preserving accessibility for people with physical disabilities, which means there are lessons Minneapolis can glean as we continue toward the goal of implementing 30 miles of protected bike lanes.

The Green Lanes project “the national PR agency for protected bike lanes” as they described themselves in a recent APBP webinar, “ADA Issues at Advanced Bicycle Facilities” has been working with the federal agency that develops and maintains accessibility guidelines and standards, the U.S. Access Board (USAB) to clarify issues related to protected bike lanes and accessibility. Most pressing is incorporating considerations for people with visual and mobility impairment into the design of on-street accessible parking, transit platforms and raised protected bike lanes.

Working with an understanding of these concerns, Craig Williams of Alta Planning+Design has developed some sketches of design solutions that minimize friction and allow everyone to travel safely. His designs have now been submitted to the USAB and the Federal Highway Administration (FHWA). Further guidance is expected as the FHWA is developing a design guide for protected bike lanes. USAB is currently providing guidelines through PROWAG, but standards, which are a step beyond guidelines, are expected later this year. Once the standards are released, they will be used by the U.S. Department of Transportation and Department of Justice to set enforceable standards that the public must follow. For now, the sketches and real-world examples from the cities mentioned above give insight into compliant design.

According to direction from the USAB, the best-case scenario is to place accessible parking around the corner or on the side of the street opposite the bike facility. When this is not possible, the following next best solutions are suggested.

If parking cannot be placed around the corner or the opposite side of the street from the bike facility, the second best option is to place accessible parking at the tail end of the block. This makes it easier to create a buffer zone behind the parking spot for rear-loading vehicles to unload wheelchairs and provides easy access to the crosswalk. It is recommended the buffer zone be 5 feet wide by 8 feet long. The protected bike lane narrows next to the parking spot in order to accommodate the buffer zone and allow for side loading, but the bike lane should be no less than 3 feet wide. The narrower bike lane naturally slows down cyclists. Of note for Minnesota, a raised concrete barrier with bollard is suggested at the end of the buffer zone to alert snowplow operators of the obstacle and prevent turning drivers from encroaching onto the space. This solution can work on streets with one-way or two-way protected bike lanes. 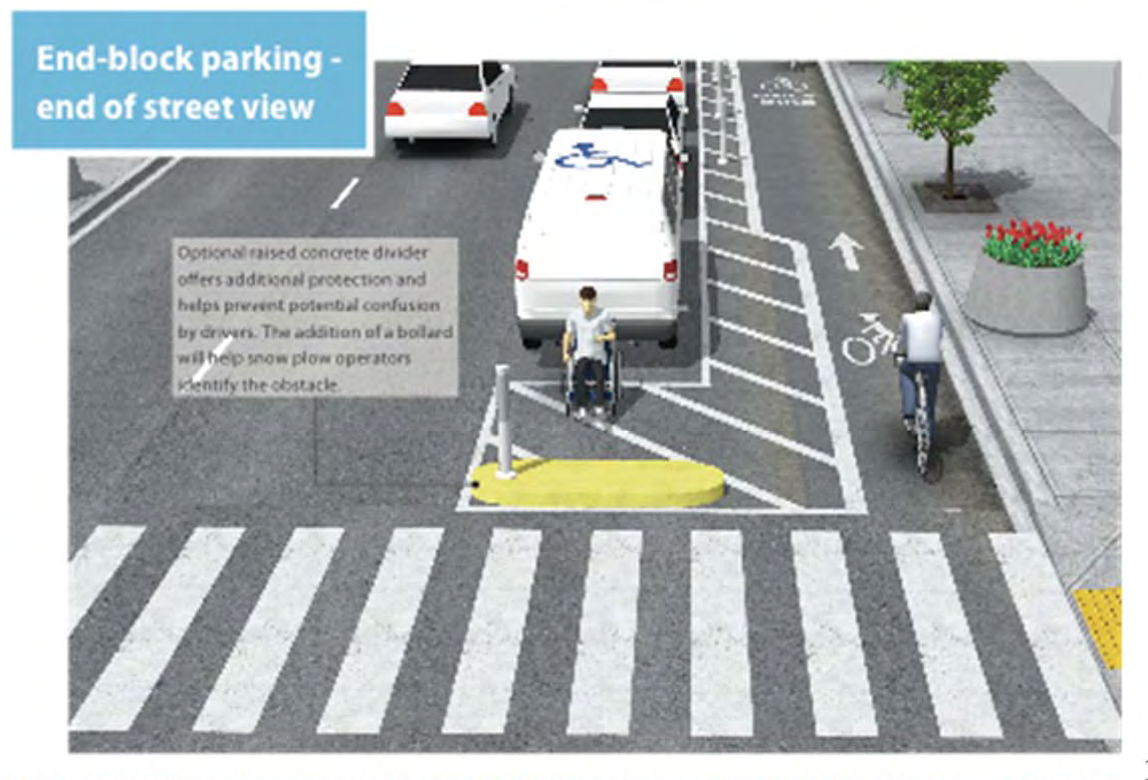 If parking cannot be placed at the tail end of the street, then it may be placed mid-block using one of two possible methods.

1. A mid-block accessible space relies on a side buffer zone of 5 feet, which narrows the protected bike lane. The parking spot should be at least 20 feet long to accommodate rear loading. A highly visible crosswalk complete with signage must be created for traversing the protected bike lane. On the sidewalk, a curb ramp minimum four-feet wide should be built. The ramp should be bordered at the rear by a railing and tactile paving should be included on either side of the ramp to make the visually impaired aware they are approaching a crossing. 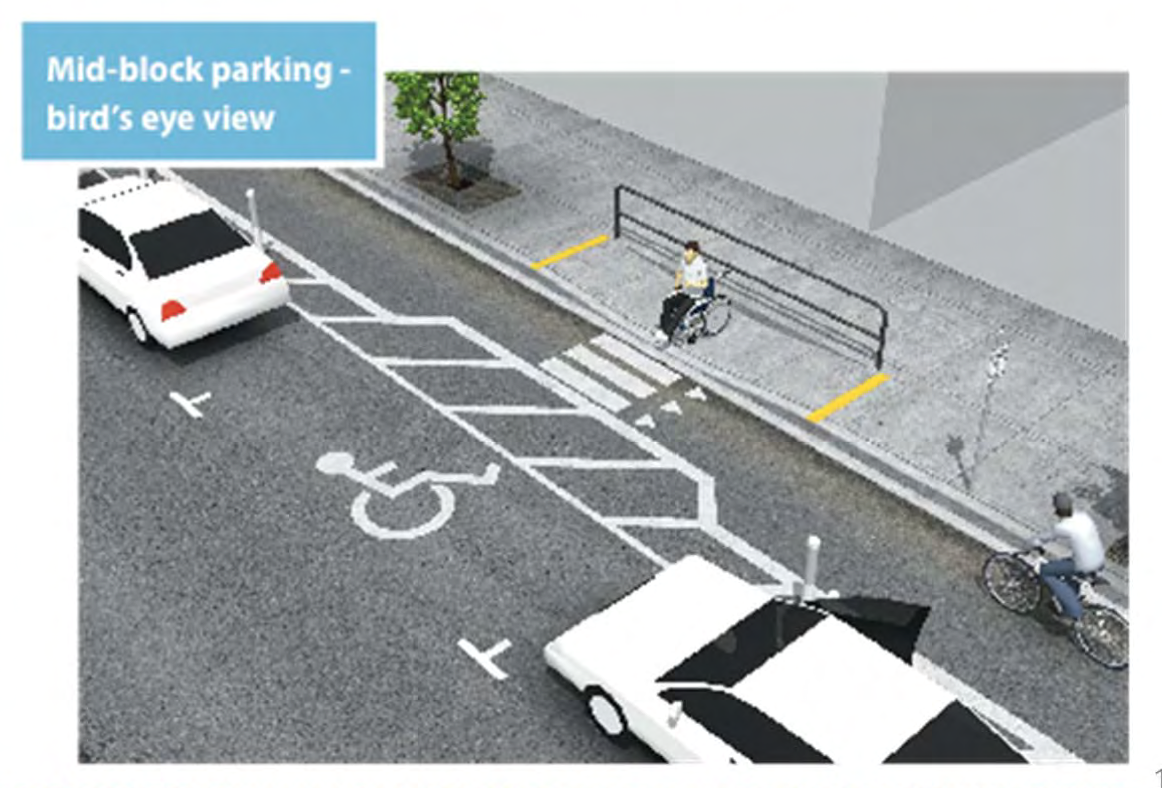 2. A cycle track with chicane is the second option. This option relies on the same basic design described above but takes space from the sidewalk to preserve the width of the bike lane. Although the cycle track does not narrow, it still succeeds in slowing down cyclists, as they must negotiate the turn in the bike lane. 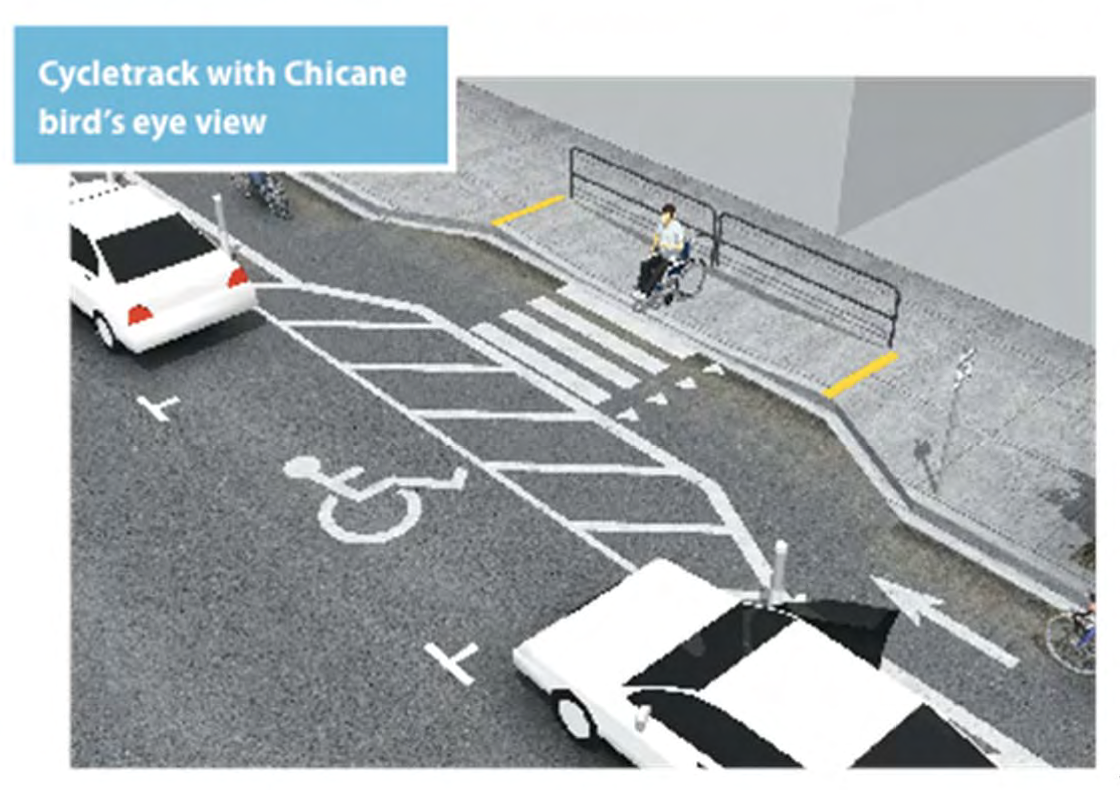 On Third Street in Austin, two van-accessible parking spots have been built next to a protected bike lane. In this case, there was space for the bike lane to maintain its normal width next to the accessible parking, but a chicane and signage serve to slow cyclists. 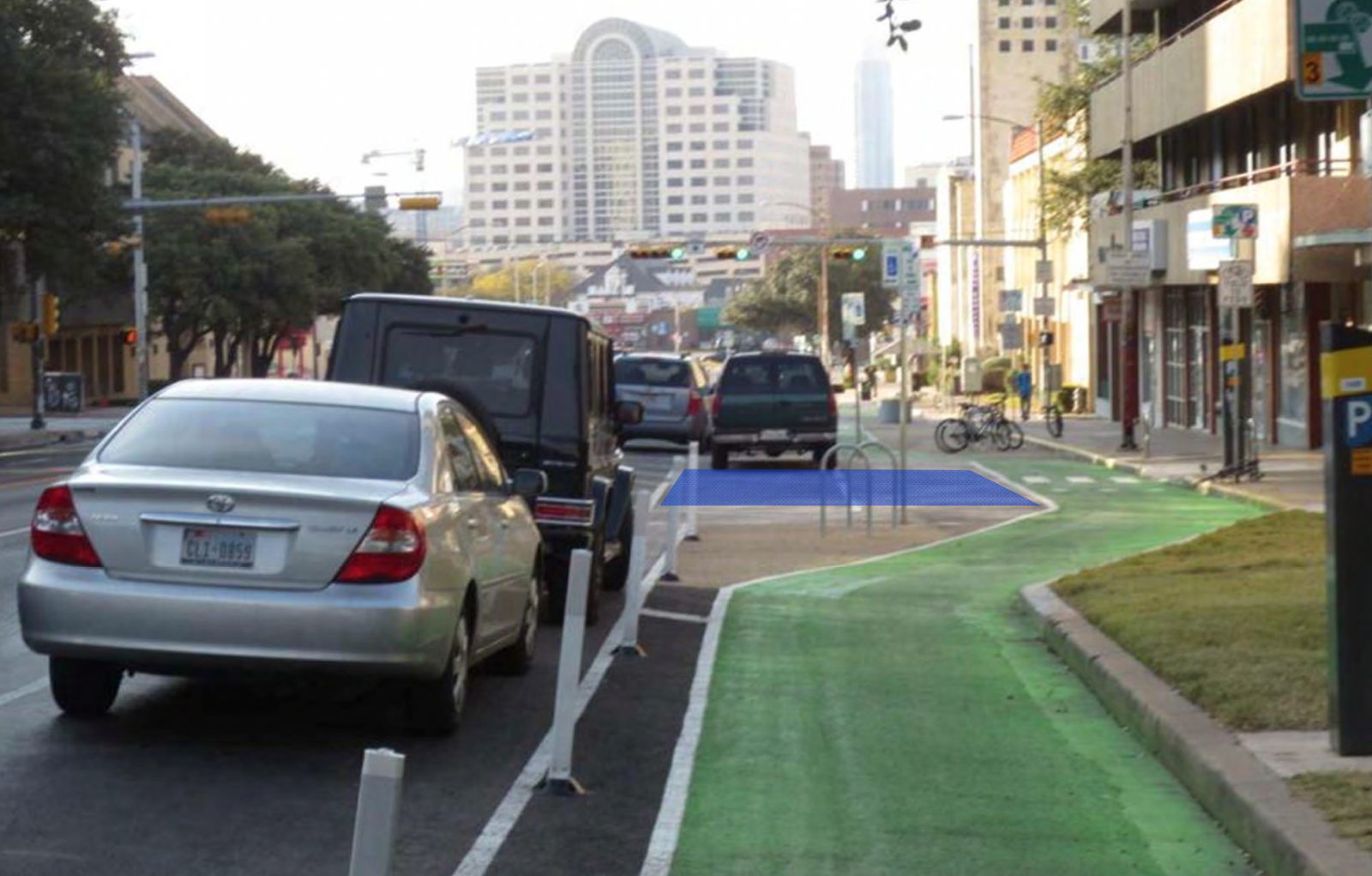 How do you prevent conflicts and slow down cyclists when passengers load on a transit platform separated from the sidewalk by a protected bike lane? Williams has sketched an end-block transit stop that is in compliance with PROWAG and ADA.

To make it clear that pedestrians have priority at these intersections, a raised crossing is preferable because it works with the flow of the transit stop and makes for easy access. The crosswalk should be four-feet wide at minimum. At-grade crossings can also be implemented, but require ramps at the curb and on the platform. Tactile pavement panels must also be incorporated into the ramps to warn visually impaired people a traffic crossing is ahead. Railings should run along the side of the platform adjacent to the bike lane, and tactile pavement must provide a warning on the transit-loading side. Platforms should be five-feet wide at minimum and no less than four-feet wide in front of transit shelters. 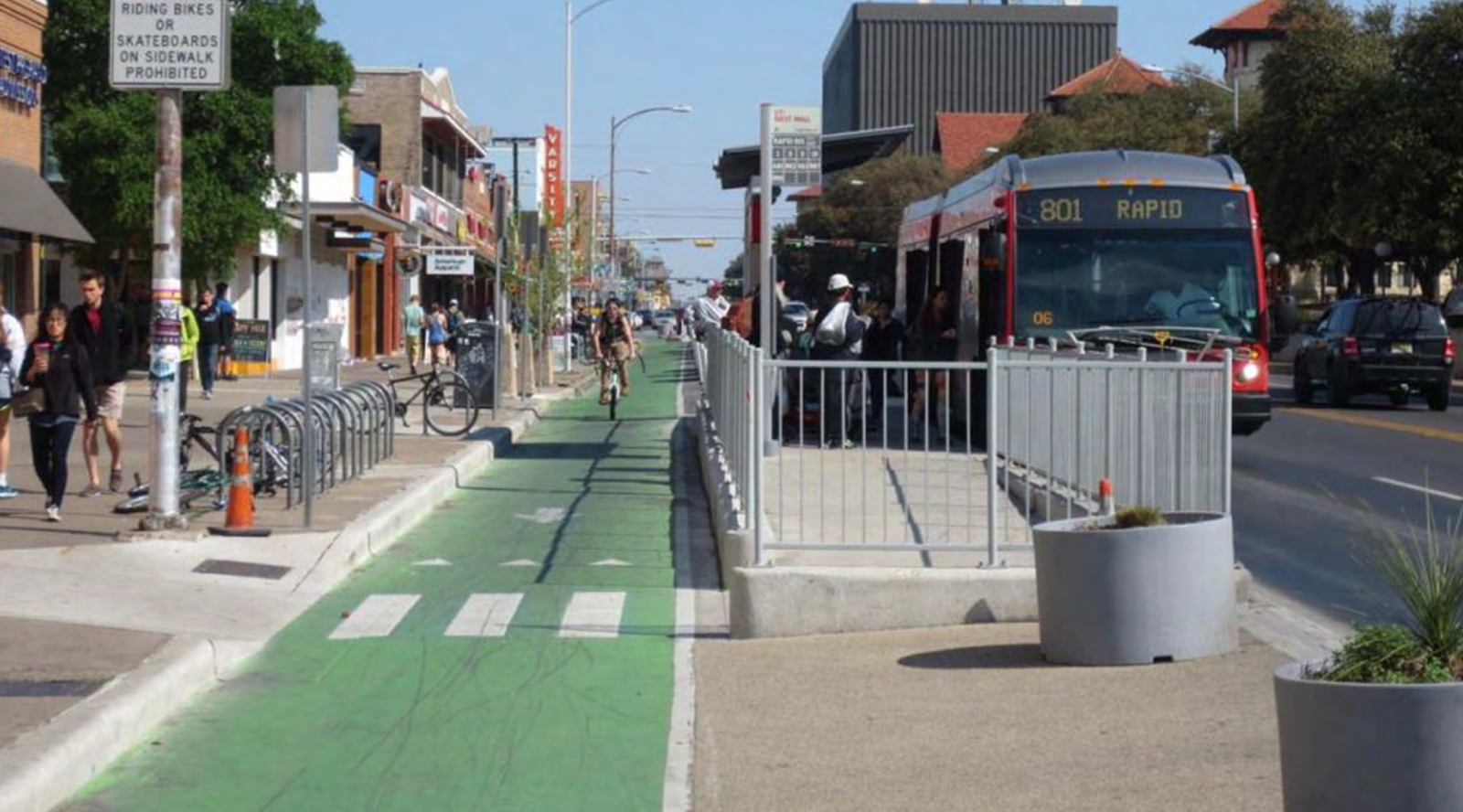 How do you ensure the safety of visually impaired people on ramps leading from a raised protected bike lane to the street? The 2012 AASHTO Guide for the Development of Bicycle Facilities recommends that on shared-use paths, truncated dome panels be used on the sidewalk before the street. Generally, truncated domes – lego-like pavement panels – communicate a warning that a traffic crossing is ahead. In addition to providing warning, tactile paving can also provide direction depending on texture. Some countries, like Japan, have standards for tactile paving. Tactile paving incorporating linear elements, as opposed to the dot-shaped truncated domes, has been used to provide direction.

In Austin, rather than placing a truncated dome at the end of a ramp leading from a shared-use path to an on-street bike lane, directional tactile paving has been placed at the top of the ramp to help visually impaired people continue along the path and avoid the ramp altogether. 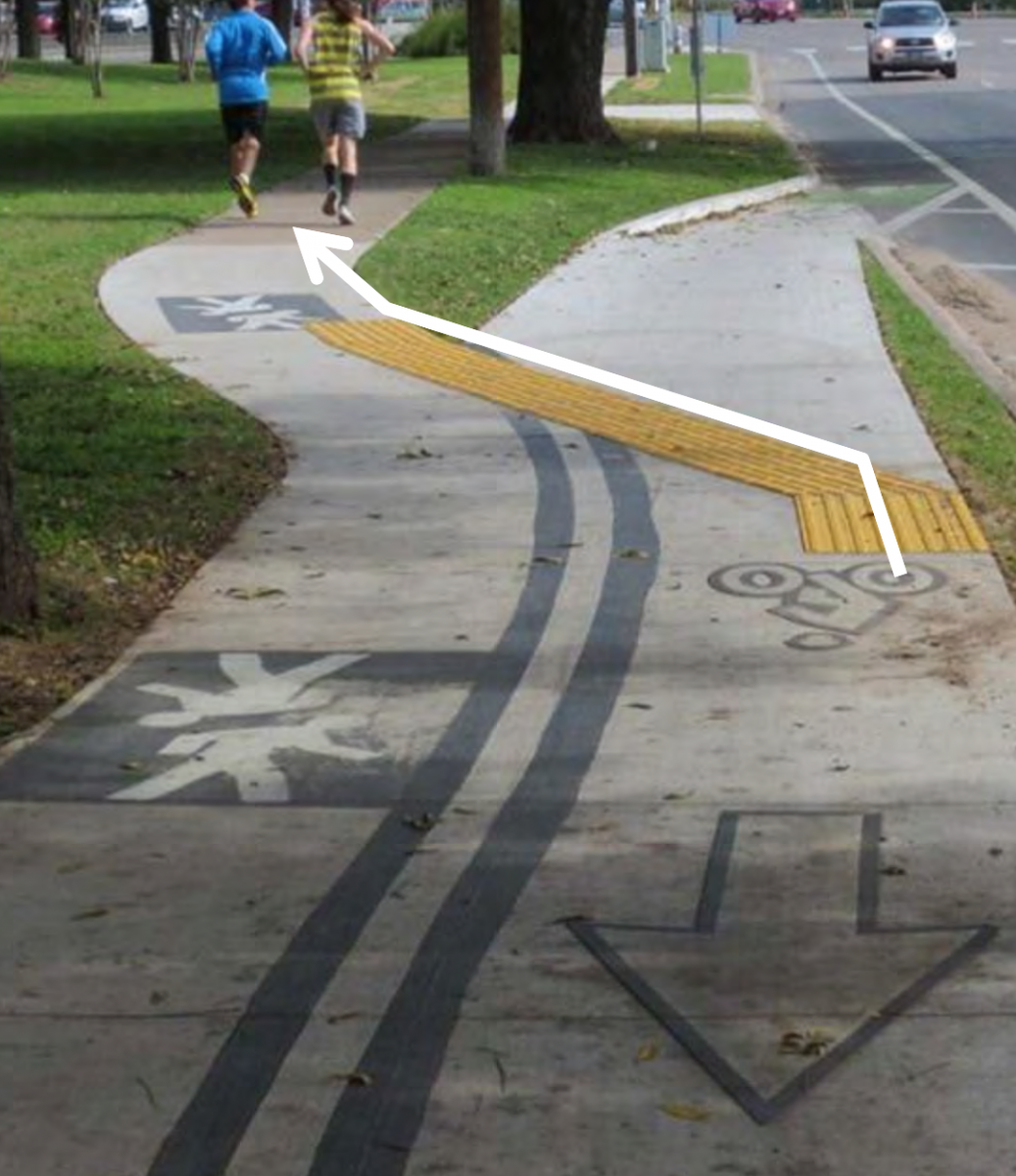 On Georgia Street in Indianapolis, directional tactile pavement panels have been laid in between the sidewalk and cycle track. 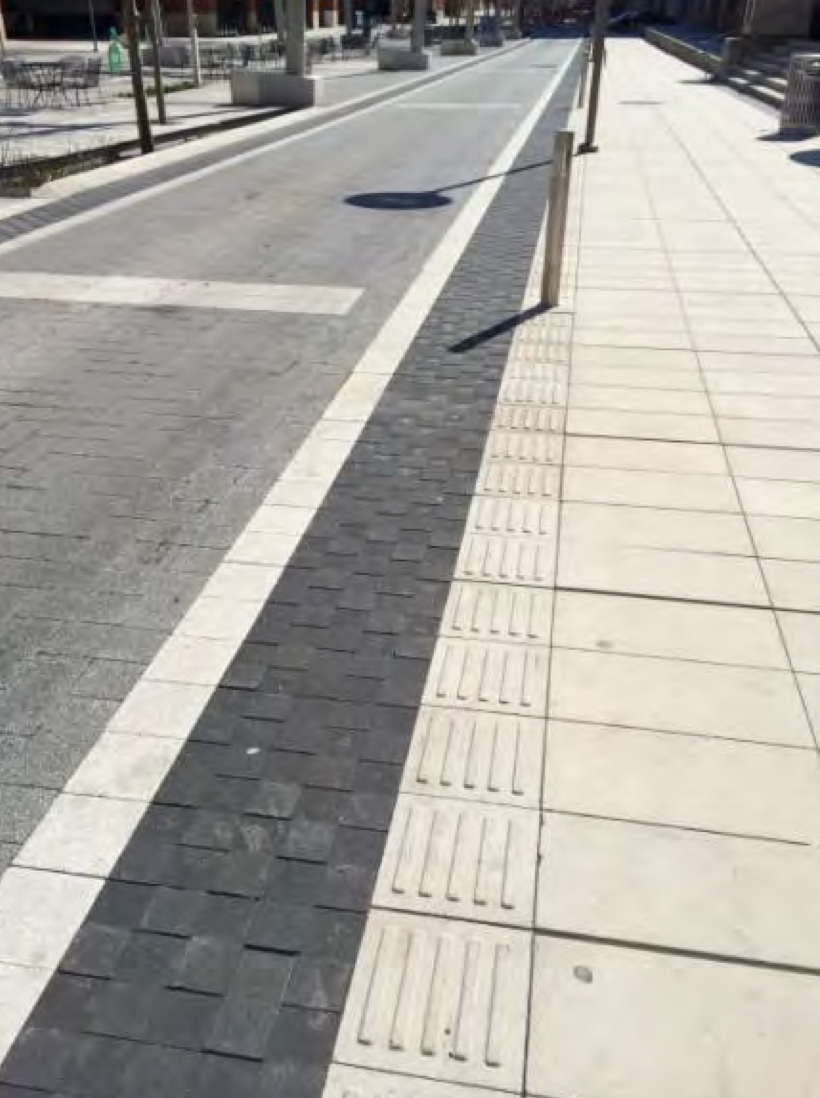 The sketches and examples discussed here often relied on paint and tactile paving. To make street designs like these clear and accessible for cyclists and for people with physical disabilities all through a Minnesota winter, maintenance would be key. Perhaps, maintenance does not necessarily have to be looked at as a negative. In a recovering economy, the labor required could be considered job creation.

In practice, cities like Montreal and Copenhagen have figured out how to keep their protected bike lanes clear of snow. Closer to home, we can also learn from Chicago as they figure out how to maintain their new protected bike lanes through the winter. This is Minnesota, and small-scale equipment is already used for clearing sidewalks, recreational paths and other areas. Perhaps, we are better prepared that one might assume.

Furthermore, maybe snow should be viewed as an opportunity, think pop-up protected bike lanes for the other six months. With a little creativity and some elbow grease, maybe we could use snow and rubber mats to implement seasonal pilots that give people of all abilities the opportunity to move around actively during the winter.

Whatever the right solution for Minnesota may be and despite the required maintenance, examples from other cities together with soon-to-be released standards will only make it clearer that protected bike lanes do not have to be an impediment to accessibility.