2nd round of Minnehaha public meetings & our position

Hennepin County has announced their second set of public meetings on the Minnehaha Avenue reconstruction project.

Staff from Hennepin County, LHB Inc. (the county’s consultant), and the City of Minneapolis will be available to discuss the project and answer questions. A brief presentation and question and answer session will take place from 6:30 to 7:30 to provide a project update, schedule, and progress to this point.

We support a protected bikeway (cycle track) for Minnehaha Avenue to connect the Midtown Greenway to the Minnehaha Park trails. That much you probably know.

But we actually do not support the current cycle track design offered by the County. We would like to see a revised design that incorporates current best practices to limit impacts on street trees and street parking while supporting safety and visibility at intersections. We'll continue to offer productive ideas in hopes of finding the best solutions for the street.

The majority of the community opposition to the cycle track design stems from the decisions made that add impacts to treets (at bus stops) and parking (at intersections). We've shown ways that parking and trees can be protected within national standards for designing cycle tracks.  We are committed to working with staff to find solutions that address these concerns.

We've also heard concerns from staff about safety at intersections, which we agree needs to be addressed. The project engineers do not seem convinced that it can be addressed, but we'll continue to work with national best practices to bring forward ideas to support safety--even on a street that runs on a diagonal like Minnehaha. The reality is that there are few guarentees for safety on a road like this. There is plenty of evidence to suggest that a well-designed cycle track can improve safety, but we can't say that with 100 percent certainty, just like no one can say with certainty that the bike lane is the safer option. What we all can agree on is that a cycle track is more comfortable and attractive to the wide range of cyclists and potential cyclists on Minnehaha. That's important for the businesses, neighborhood, public health, environment, and a whole host of other public and personal goals.

We've heard from many, many people that they are excited about the idea of a protected bikeway on Minnehaha. We want to make sure that all types of bicyclists are included in the design and not just more confident cyclists who are comfortable on Minnehaha today.

While we've been talking about the idea of a protected bikeway on Minnehaha for about 19 months now, the idea originated with Hennepin County's Minnehaha-Hiawatha Community Works Project. That years-long community planning and engagement effort includes many recommendations--quite a few of which are being incorporated into the Minnehaha Ave reconstruction. On pages 116-119 of this County document, you can see how the idea of a cycle track is covered in quite a bit of detail. While reasons for a cycle track are not covered specifically in that document, they likely stem from the many community comments (see pages 3-5) received about concerns with biking on Minnehaha. Comments like "bikers avoid Minnehaha bike lanes" and "on Minnehaha cars use bike lanes as driving lanes and parking lanes."

So, we hope we can take all of the community input from the Minnehaha-Hiawatha Community Works Project into more account as well as final designs are put together.

Diagram from Hennepin County's Minnehaha-Hiawatha Community Works Project showing a sample of what a cycle track could look like. Note that through the review process, it was determined that a two-way cycle track on the west side would be preferable to two one-way cycle tracks on each side.

Now to end with a photo journey through Montreal. Montreal is a good comparison for Minneapolis because it has snow (much more, actually, 89 inches average to 45 inches in Minneapolis) and it gets cold (164 days below freezing vs. 154 in Minneapolis).

The first 7 pictures here are the Rachel Street cycle track, which runs more than 3 miles connecting two parks with trail systems. It is a street quite similar to Minnehaha in sections. It has a two-way cycle track on one side with two-way traffic, buses, parking on both sides in some areas (in other areas it is four lanes with no parking), and plenty of businesses. It only has a few skewed intersections, but has many more intersections overall. You can see it on Google Maps. A Harvard study of cycle track safety shows that an average of 2,581 cyclists road Rachel Street a day. 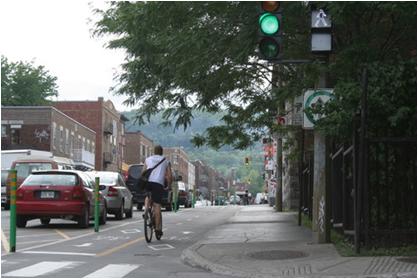 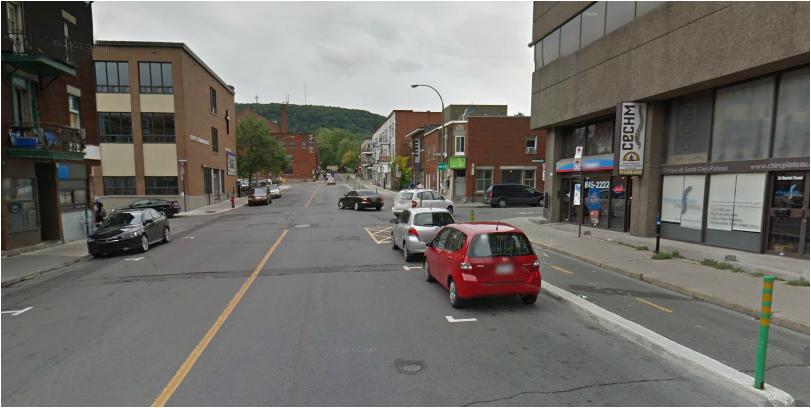 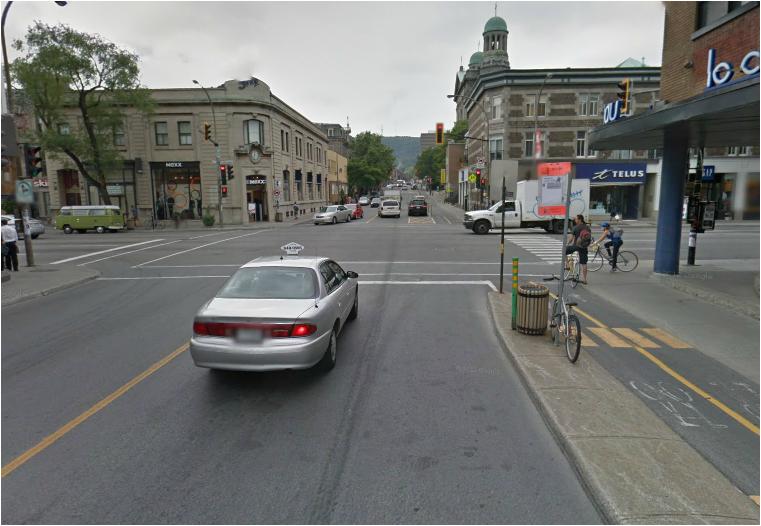 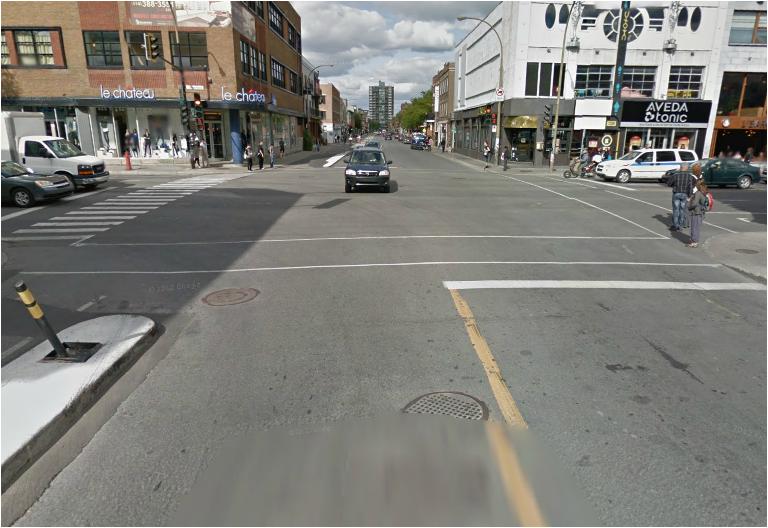 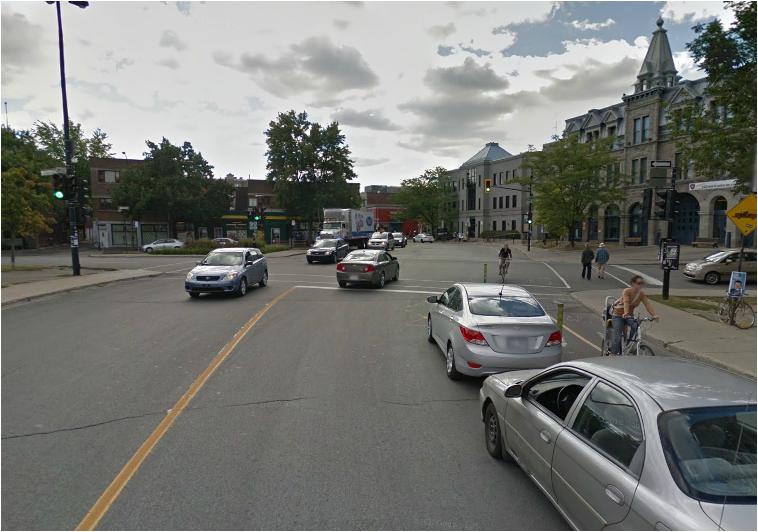 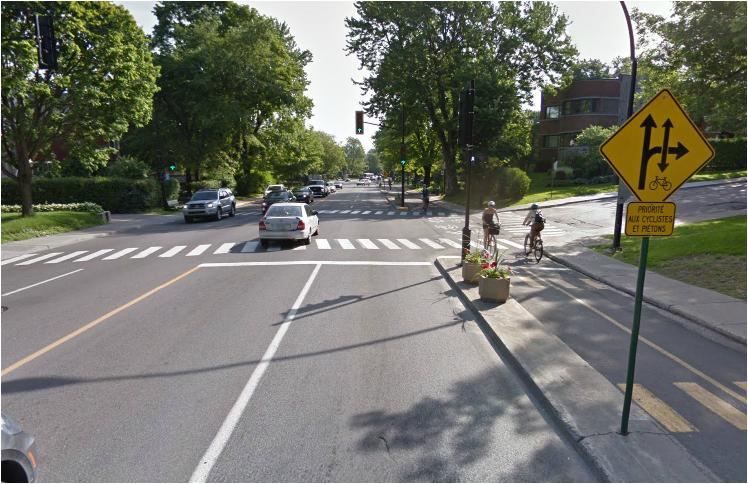 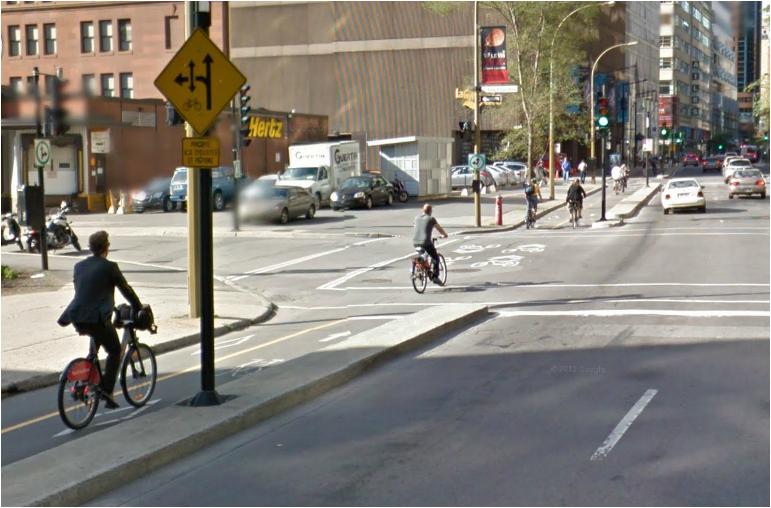 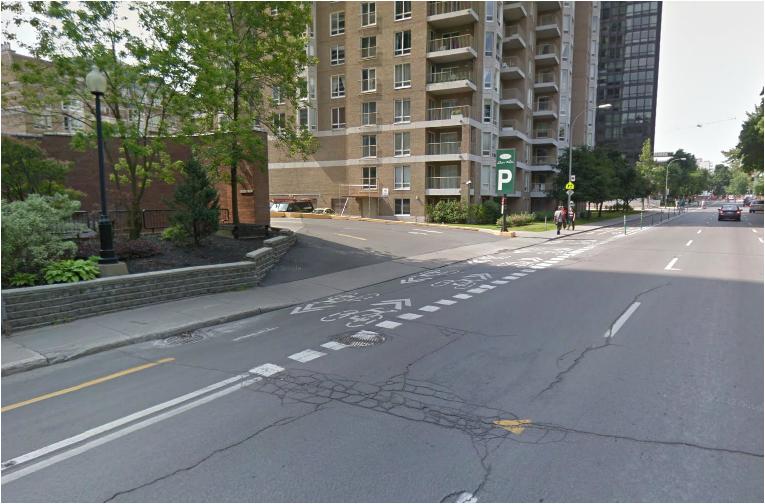 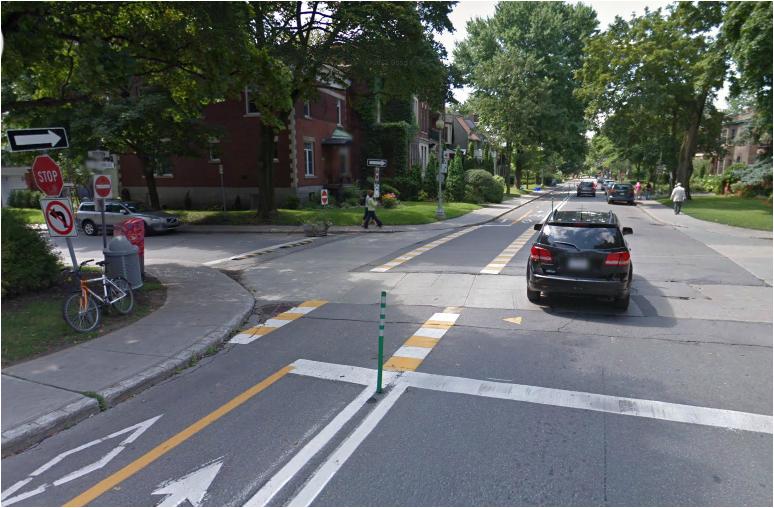