Google Doodle made this video for International Women's Day, about seeing the possibilities for women, globally.

Women and trans staff at the Minneapolis Bicycle Coalition- with our powers combined! 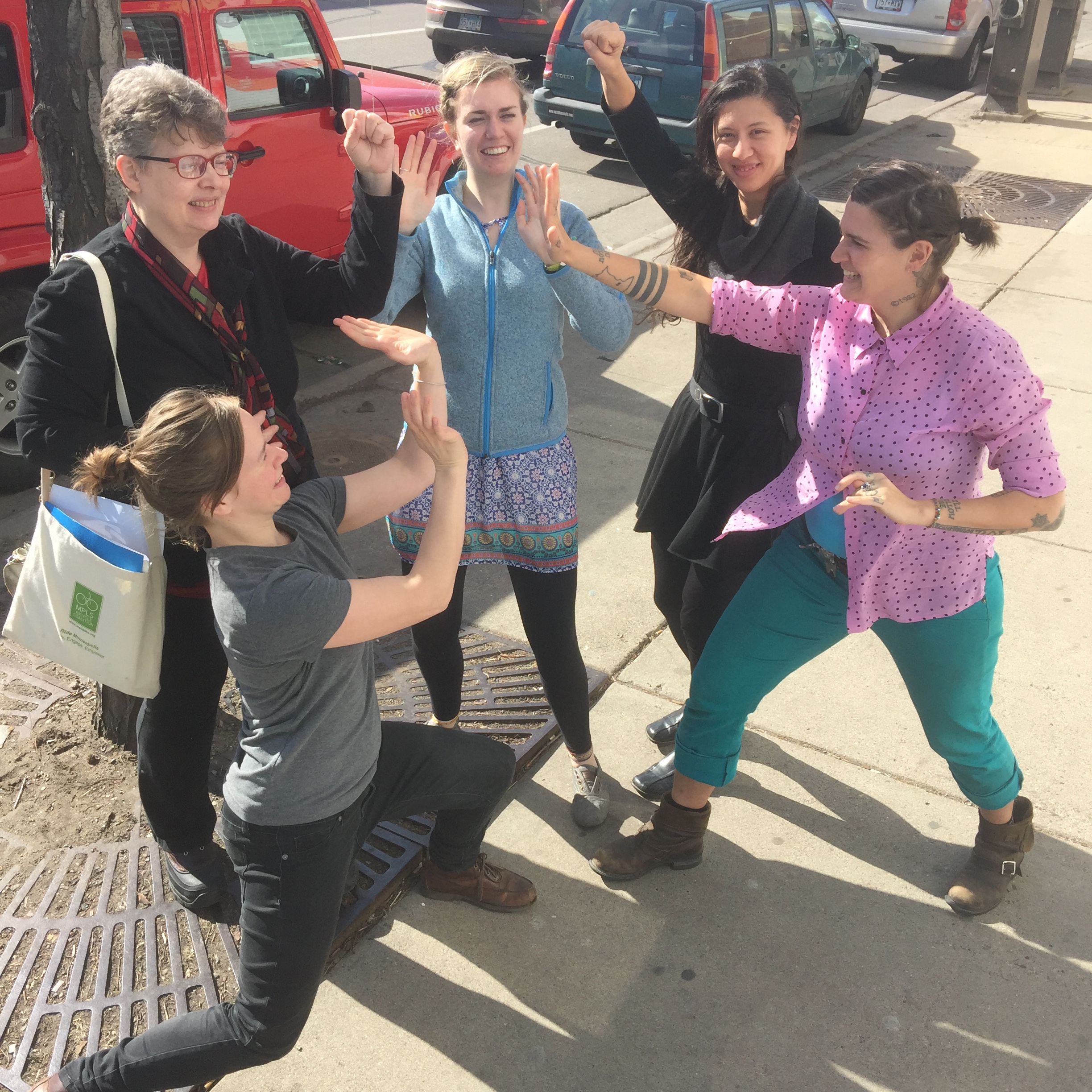 [Image: Five women and trans folks giving enthusiastic high fives in a semi circle, outside in the sunshine]

In 1975, which was designated as International Women’s Year, the United Nations gave official sanction to, and began sponsoring, International Women's Day. Now, every year, the UN designates a political and human rights theme to IWD. 2016 is “Pledge for Parity”.  The gender gap is real.  REAL HUGE.  And if you are a cis person or a white person or a person with economic privilege, recognize that the effects of the gender gap are more dramatic if you are POC, poor, and transgender.

The World Economic Forum predicted in 2014 that it would take until 2095 to achieve global gender parity. Then one year later in 2015, they estimated that a slowdown in the already glacial pace of progress meant the gender gap wouldn't close entirely until 2133.

Everyone - men and women - can pledge to take a concrete step to help achieve gender parity more quickly - whether to help women and girls achieve their ambitions, call for gender-balanced leadership, respect and value difference, develop more inclusive and flexible cultures or root out workplace bias. Each of us can be a leader within our own spheres of influence and commit to take pragmatic action to accelerate gender parity.

International Women's Day, formerly known as International Working Women's Day, did not start in 1975. In the late 1800's the oppression of women politically, economically and socially was becoming unbearable, and globally, strong women were beginning to unite, campaign and speak OUT to demand rights, equality, humane working conditions and the right to vote. Many national celebrations of womanhood were organized around the globe in the early 1900's.

Women have been politically active, organizing labor unions, striking, protesting, and fighting for every cent of the 77 that we earn compared to a man's $1*, and for rights to manage our own bodies for much longer than International Women's Day has been around. I mention this because I love IWD, but it's important to me to recognize that we have been proud radical organizers since before it was sanctioned or recognized!

*2010 Census Data (There would be an even greater inequity if we broke this down by race.)

Tell us what you've got going on!

For me, personally, the concept of "woman" is not the most useful category, as it does not contain me, or even my "womaness." I celebrate this day as a woman, transgender, femme (WTF) day of action, organizing, and solidarity.  What are you doing to elevate women and trans people? This is one day of labor awareness. One month of history awareness. But our work is everyday. Please share how you are doing this work!  We would love to connect with you.

What is happening for women on bikes, right here, right now?

If you benefit from cis-male privilege, please sit this ride out- thank you for respecting our space.

Do you identify as Women, Trans or Femme? Are you interested in helping plan the Women's Bike Skill Share for Minneapolis Bike Week? Join us at the Coalition to help us put it together and eat delicious snacks!

Do you identify as a woman, transgender, or femme (WTF) person? Do you work on bikes, sell bikes, advocate for bikes, own a bike business, promote biking, or want to become more involved in any of these things?
Let's meet. Let's have fun at a WTF-only event.

This is a little far away geographically, but the National Bike Summit is happening right now, and our hearts are with our friends, including Board President Latrisha Vetaw, who are in DC for the Women's Bike Forum. 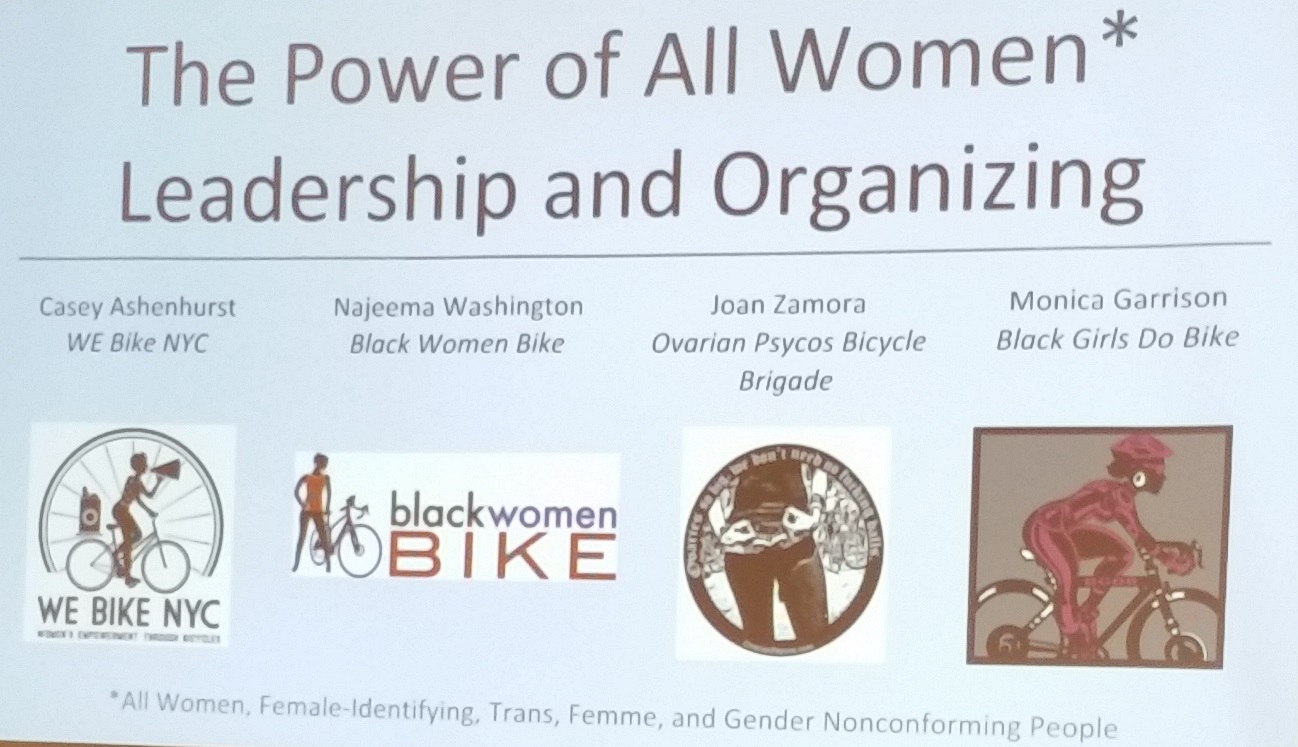 [Image: A slide from "The Power of All Women" Leadership and Organizing" panel at the Women's Bike Forum.  The asterisk reads, "*All Women, Female-Identifying, Trans, Femme, and Gender nonconforming People"]