The City of Minneapolis’s proposal for winter sidewalk maintenance leaves out a city-led program.

During a recent update to the City of Minneapolis Public Works & Infrastructure Committee, Public Works staff presented on the city’s near-term plans for winter sidewalk clearance. The presentation slides can be viewed here.

The ability to walk and roll is a basic right, but for many -- particularly community members who are disabled, transit dependent or elderly -- neighborhoods and small businesses become inaccessible in the winter.

The current system of relying on a patchwork of property owners to clear sidewalks is not working. It is confusing and inequitable. In the last six winters alone, there have been over 30,000 submitted complaints of uncleared sidewalks. If just one property owner fails to clear their sidewalk, it means that an entire city block becomes inaccessible.

A City-led sidewalk clearing program is the best path to ensure that the City’s most trafficked sidewalks are clear and accessible year round. Disappointingly, Mayor Frey, Public Works Director Anderson Kelliher, and City Council Members continue to ignore this issue. Instead of piloting a municipal sidewalk clearing program, the strategy outlined in the presentation would double down on the current failed approach of fines and enforcement. Public Works staff even declined to further explore piloting a city sidewalk clearance for residents who are over the age of 65 or who have a disability.

We will continue to organize until Mayor Frey and City leaders make a public commitment to funding a municipal shoveling program in the City budget.

Specifically, we are asking that Minneapolis Public Works request $6 million in the Mayor’s proposed 2023 budget for the creation of a city-led snow and ice clearance program focused on the Pedestrian Priority Network. We also ask that the program also be extended to fully clear snow and ice from all bus and LRT transit stops citywide. This budget request is based on the City of Minneapolis’ study that evaluated the cost to acquire the necessary equipment and personnel to create a program that addresses most snowfall events.

Starting in 2023, our focus will shift towards increasing this funding to at least $20 million in order to expand the city snow and ice clearance program to include the entire City of Minneapolis sidewalk network.

You can support the creation of a municipal shoveling program by contacting City decision makers! 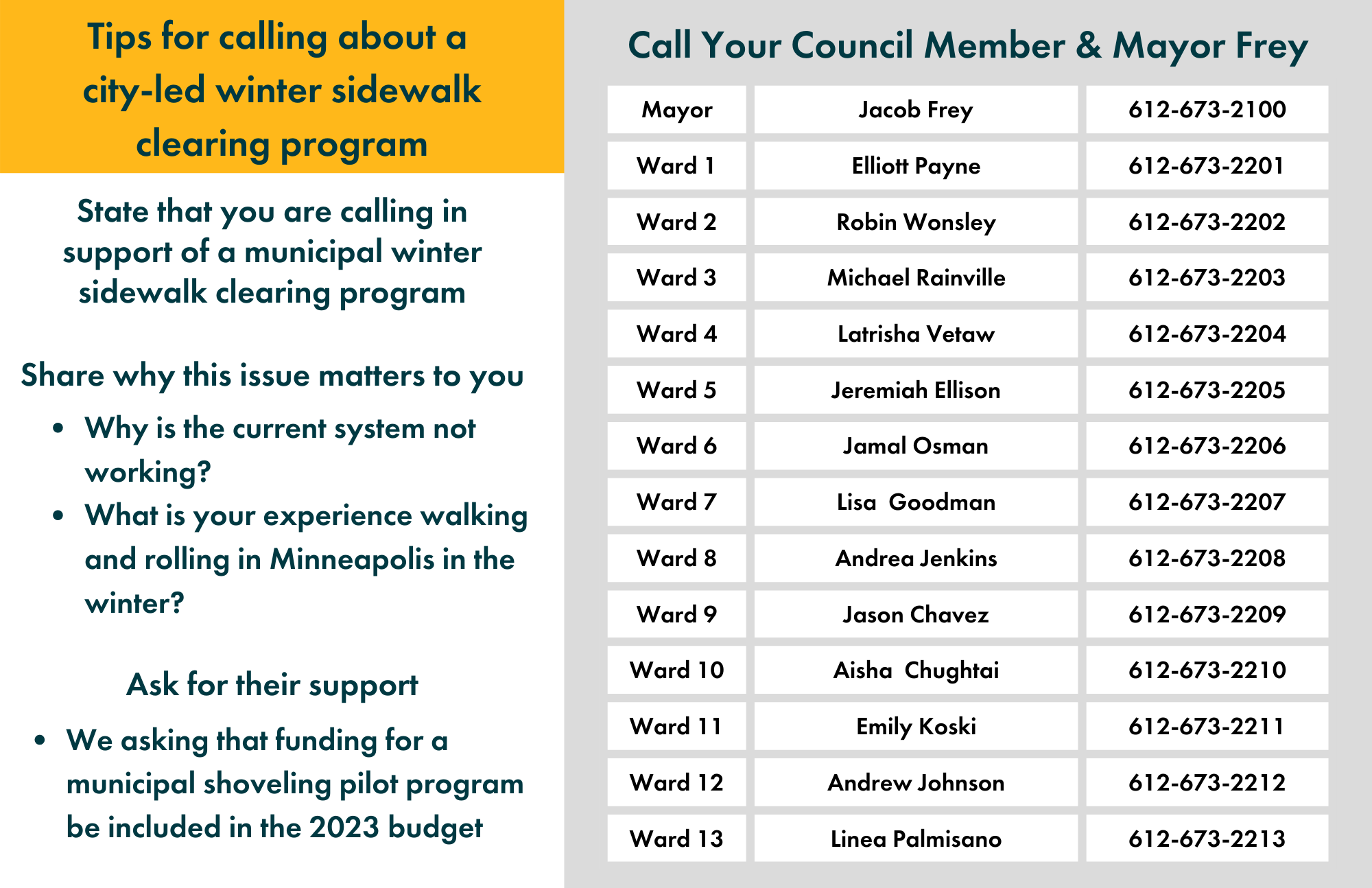