Marc Berg is an attorney and bicycle commuter with a singular focus: to get a bike center built in downtown Minneapolis.

A bike center is a secure facility where bicyclists can change clothes, shower, get a cup of coffee, and have their bike fixed while at work or out socializing in the city. Madison, Chicago, and Seattle have centers. And St. Paul is out-Minneapolis-ing Minneapolis by building one in the Union Depot.

Marc has talked to Mayor Rybak about it, started a Friends of the Downtown Bike Center Facebook group (login required), and has figured out what city committees to bring it to. He's even found a graduate student (Forrest Hardy) who has mapped out a conceptual bike center for Minneapolis.

A lot of people he encounters seem to like the concept - but it's a big boulder to push, and the hurdle is of course: who's pays for it?

I met Marc at the one of these city sub-committee meetings, which passed a resolution to recommend a feasibility study on the idea. That resolution will be on today's agenda at the full Bicycle Advisory Committee (BAC) meeting.

Marc's hope is that the BAC passes the feasibility study resolution, which would determine if a bike center is a demonstrated need that is not already being met. It would investigate what type of bike center, what services it would have, how much it would cost, and the operational model.

Do we need a bike center?

One of the supposed hiccups to everyday biking is that people need a practical way to change into work-appropriate clothing. The resolution says:

"A full-service bike center will increase the percentage of bike commuters by offering a practical anda ttractive alternative to those who would bike IF they could find solutions to issues such as safe and secure bike storage, showers and changing facilities, repair service, and everything else needed for a positive end-of-trip experience."

A central location or hub and spoke model

(My antecdotal evidence: when I toured Target Corporation's private bike center on the Nicollet Mall this spring, our Target guide said this: Even with the new facility, Target commuters who work in their City Center location had thus far preferred City Center's (less than perfect) bike facility over the Nicollet Mall's snazzy features. (On that note, I can't help but wonder the private sector's role in this discussion, as they seem to increasingly recognize this growing group of commuters. The U.S. Bank Plaza where I work (pictured) just expanded their bike facility. 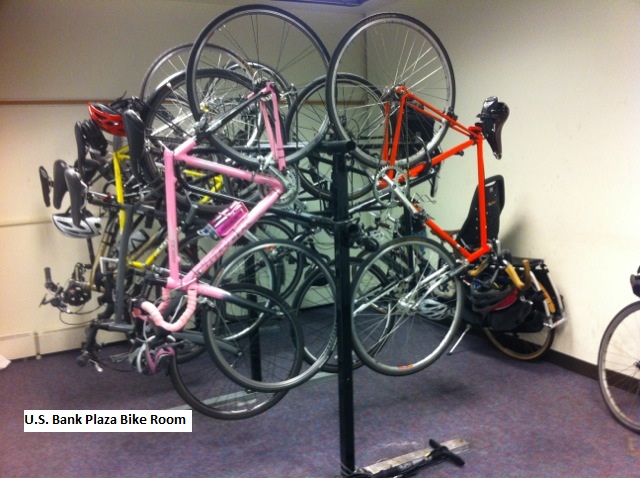 Even if the bike center resolution is passed it will need to work its way to the city council, which would then need to agree to fund the study via inclusion in the city budget. Budget discussions for 2014 are happening now so the timing is right.

But still, where does a bike center fit in the overall Minneapolis bicycle agenda? Other bike initiatives are already established (e.g. cycle tracks), so whether a bike center can leapfrog those other priorities in 2014 is unknown.

Then again, a bike center feels like a key ingredient to the city's claim as a top bike city. If 2013 was the Year of the Bike (or Bike Share), will 2014 be the Year of the Shower?