Why Franklin and not [insert desired bike lane here]?

Recently I was chatting with some frequent Coalition volunteers, and it was a revelation and reminder of how things that seem obvious to me (and others super-engaged with our work) are not obvious to everyone. Why Franklin and not some other street?  Why bike parking and Open Streets instead of bike rodeos? 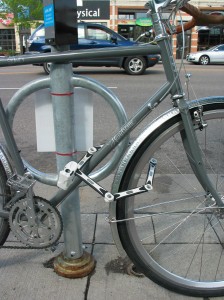 The first is that we see an opportunity to influence the design of something -- the new Seward Franklin Avenue lanes as well as ongoing work on Franklin fall in that group.

The second is that a volunteer has an idea they are willing to make happen -- Open Streets, the first round of bike parking, and PARK(ing) Day fall in that group.

The Coalition has two work groups that we call Projects and Policy.  (By the way, if you want to get involved, they have combined meetings and convene 6pm tonight at Uncommon Grounds coffee shop at 2809 Hennepin Avenue.)  They track the work of the Minneapolis Bicycle Advisory Committee carefully -- and use that information to identify opportunities.  Luckily, the BAC gets a heads up on projects the City, County, and Park Board will be working on in the near future as well as capital improvements a few years out.

Why is the list important?  Because it is nearly impossible to get a change made on a street that is working OK if nothing else is happening on that street, even if the idea is a great one. The responsible entity doesn't have the money (City, County, Park Board), and their staff are busy working on other things.  On the other hand, if something is happening already, the budget is in place, so getting bike-friendly streets tends to be about building the political will to design it right or make the change.

Park and Portland are a perfect example of this, as Hennepin County is doing the mill and overlay and painting anyway. Washington Avenue is similar, in that several blocks will be rebuilt in a few years no matter what, so we hope to build the political will to get something better done when it is designed, rather than repeating the current car-centric design.

What that means for the Coalition is that we start selecting projects to work on by looking at what is in the works.  Then we try to match up volunteers with the projects to get them done, and if we can't find the volunteers, well, we do what we can. 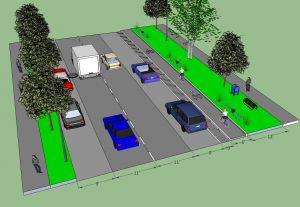 One potential way to add a cycle track and new green space in the future.

The other sort of project the Minneapolis Bicycle Coalition has taken on are those someone specific wants to make happen. Typically, an individual has an idea (Open Streets, the first round of bike parking, or PARK(ing) Day), proposes it -- including being willing to take the lead on making it happen and recruiting others to help out -- and off that volunteer goes.  Some projects are big, some smaller.

The Coalition often has relationships or other resources that can help along those efforts, so we do what we can to help reach out to volunteers or make useful introductions.

Another smaller example was the resident-organized bike parking ride to 48th and Chicago, where we had flyers to offer businesses and could help get the word out as a neighbor to the node organized a group to meet up and ride as a group to make in-person requests.

I guess there is one more category of things the Minneapolis Bicycle Coalition is working on -- which is getting organized to be able to get more done.  We have a work group called Organizational Development, and that crew of volunteers prepares communications materials, recruits individual and business members, hosts happy hours and the Joy Ride, updates (or creates) websites, solicits blog content, recruits and does our volunteer-best to support volunteers, sets up databases, figures out annual work plans and strategic plans... you get the idea.

What are You Wondering about the Coalition?

Do you have any questions about what goes on behind the scenes at the Coalition?  Ask in the comments, and I'll pen an answer.