What the heck is CLIC? 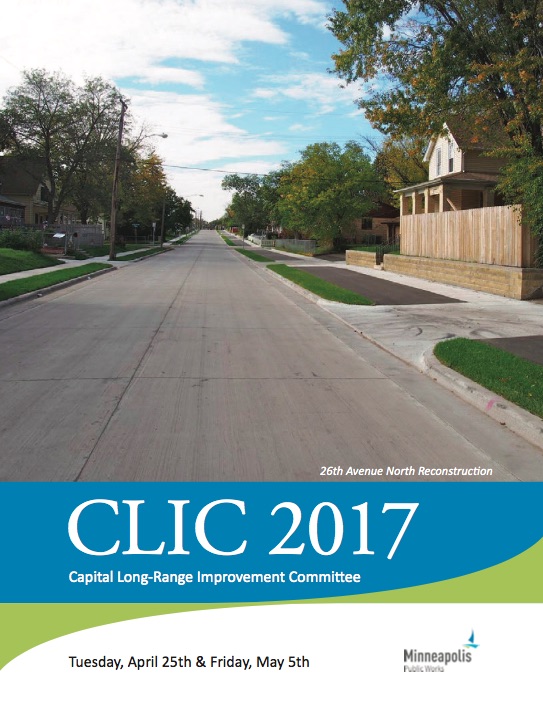 CLIC stands for Capital Long-Range Improvement Committee. CLIC is made up of 33 resident representatives appointed by City Council Members (two per ward) and the Mayor (seven at-large members). The job of CLIC is to review projects brought to us by City of Minneapolis departments as part of the City’s five-year capital budget, and to then make recommendations for funding to the City Council and the Mayor based on a number of criteria.

I’ve served on CLIC for a few years now as a Ward 2 appointee, and it’s been an incredible insight into how the city uses citizen input to help guide the budgeting process for our long-term capital projects. It’s also meant I’ve gotten to see a lot of cool photos of people standing inside massive sewer and storm tunnels - though I haven’t been invited to see one in person yet (though we do very infrequently get tours of facilities built with capital funds).

My hope with this blog post (and a few more) is to give a deeper dive into the process, challenges I’ve seen with how the CLIC process functions, and then highlights (or low-lights) of the coming capital budget.

This past Tuesday the entire CLIC body gathered in the City Council Chambers to listen as Mayor Hodges, Council President Johnson, and Council Member Quincy laid out their priorities for the City of Minneapolis capital budget over the next five years. The Mayor focused her remarks as she has the past few years on equity; urging the Committee to not just try and fund projects equally across the city, but to do so equitably - focusing the most funding where there was the greatest need. She made a case for focusing specifically on Racially Concentrated Areas of Poverty, or RCAPs. I'll discuss what our process looks like in a future post, and will dive deeper into challenges around equity within the CLIC process.

Minneapolis residents apply to be on CLIC and serve two-year terms. While it is generally an open application process, in reality I have found that most Council Members will make asks to get people on the committee. Once you’re on and have developed a relationship with your Council Member, it can be hard to be replaced - there are members who have literally been on for decades now (whether that’s good or bad is up for debate). Being on CLIC is a pretty big time commitment - the CLIC calendar is packed April - June every year. We meet multiple times up until mid-summer, and have a lot of reading and rating we need to do outside of meetings. This year we will meet twice to get settled and elect committee officers, and then we dive into two all-day sessions with presentations from city departments on their capital project proposals. 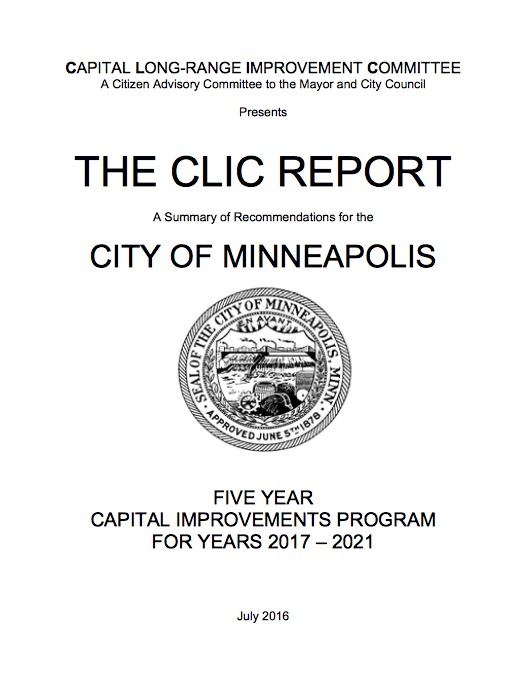 These presentations are CLIC’s opportunity to needle departments about their priorities, nudge them in the direction we think they should be going, and ask direct questions about how projects will serve the City’s goals - and why they’re worth investing in given limited resources. Each department brings us a number of Capital Budget Requests (CBR’s) for specific projects; in the past these have been as few as 80 total, though this year there are over 120. Each one outlines a specific project, where it fits into the five-year budget, the need for it, and how it fits into the City’s goals. Our questioning and conversation with department presenters isn’t just to get more info about the slate of projects we’re reviewing, it also leads to improvements in internal department processes. For example if you read CBRs from a few years back and compare them to this year’s, you will see a great deal more information is now included in them, and departments have had to go through a more rigorous process in creating these funding requests. A great example is paving projects from Public Works, the area I’m probably most interested in (good thing it’s most of what we do!). If you read this year’s CBR, you’ll see some questions that do not exist in previous years, but clearly speak to the goals the city has set for itself:

Is the proposed project on a route that is included in the Bicycle Master Plan? If yes, how is the route designated.

Is the proposed project on an existing or planned transitway, transit route, or high-volume pedestrian corridor? If yes, provide details on how the project will improve the transit and/or pedestrian experience.

You’ll also notice that over time things like IT projects have been phased out of the CLIC process. This speaks to the challenges of long-term budgeting - where a few years ago it would have made sense for capital investments in servers and computing equipment, the move to cloud-based storage and changing hardware (like tablets and smartphones) have made it so IT projects no longer come through the CLIC process.

Over the next few weeks after the presentations, the CLIC body will split up into two Task Forces: Human Development and Transportation. The two groups will discuss the proposals and offer comments to include in the final CLIC Report. These can be related to specific projects; concerns we have, or things we think the Council needs to consider before funding them. Or they can be general, relating to longer term trends we see in the process. You can see our comments at the start of previous years CLIC Reports. Once that’s done, the group meets again as a whole and discusses comments, people can offer new ones, and then we vote and approve the ones we like. We also submit our own individual ratings for every project. These are all averaged to create a final project score - more on that in the next post!

The final step of the process for most members is (somewhat inexplicably) discussing water and sewer rates. I’ll be honest that this is a step that always seems the most poorly thought out - I generally don’t feel like we have enough information to decide on rate increases; it’s supposed to be so that we can cover sewer and water costs, however it seems like we generally start with incomplete information and little time to review it. To the best of my recollection, we’ve never recommended a change in water or sewer rates to the Council while I’ve been on CLIC, since we’ve never had a consensus (tell me if I’m wrong in the comments though).

For our Executive Committee, they go on to meet with the Mayor and then City Council  to discuss the CLIC proposed capital budget. I haven’t been a part of those discussions before, so I don’t have a lot of insight into these discussions.

The CLIC Report is then released and goes to the City Council; I generally meet with my Council Member at this point to discuss anything that stood out in the process, or to highlight anything especially important. Then it all goes through the City’s budgeting process *waves magic wand* and that is how streets are built! You can see how the City Council and Mayor chose to fund capital projects in the Council Adopted Budget; it’s always fun to see what gets snuck back in after we vote it down, or what gets taken out. I have a particular grudge against project PV075 (go look it up) which comes back year after year and is voted among the lowest priorities by CLIC - yet always gets funded. But all in all, most of our recommendations make it through this process and get approved.

And that - in short - is how CLIC works.