Seven ways the Transportation Action Plan gets it right on climate

I’ll admit that I opened the public draft of the Minneapolis Transportation Action Plan with more than a little skepticism about how the plan would address the climate crisis. Sure, I expected the plan to promote biking, walking, and transit, but I doubted I would see more than lip service around truly shifting how we move and use our streets to align with what the climate crisis demands.

As a professional transportation planner, I read a whole lot of transportation planning documents, and I’m all too aware that climate change is not often taken seriously--and sometimes not acknowledged at all--in documents that purport to plan for the next ten or twenty years. That’s a big problem, because transportation generates a huge amount of the greenhouse gases that are heating the planet. In the U.S., it even generates more than the electricity sector! The roads, bridges, tunnels, paths, and sidewalks that make up our transportation system are also key to our capacity to adapt to the extreme heat, storms, and floods headed our way.

As I dove into the plan, I was pleasantly surprised by how much it gets right on climate. To be sure, the plan could be stronger and bolder, but I think other cities, counties, and regional planning organizations can learn a lot from following the City of Minneapolis’ lead. 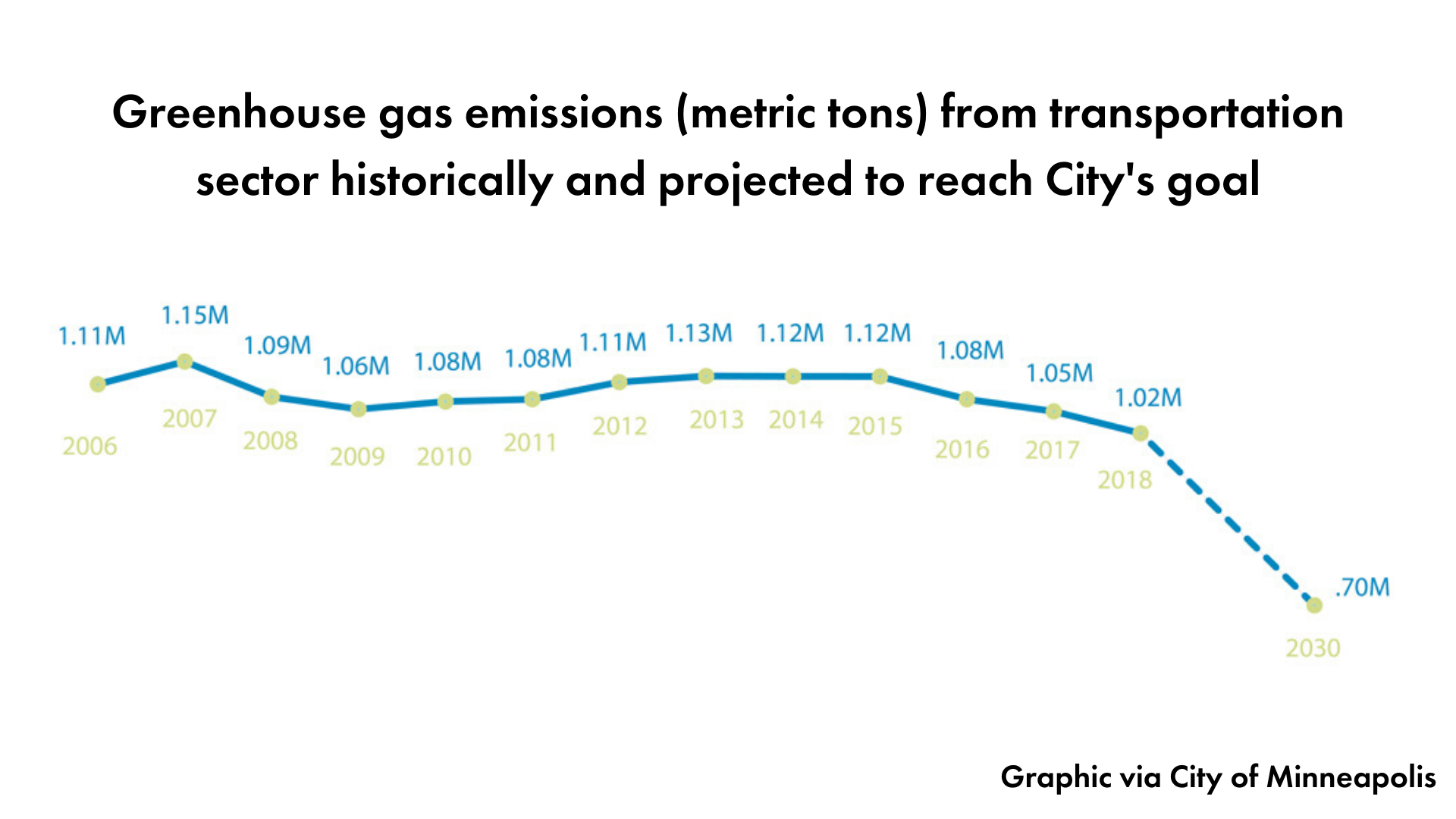 Here are the top lessons from the plan:

1. Integrate climate throughout, not as a separate section

An unstable climate threatens societal stability and undermines the foundation of our day-to-day lives, economy, and cultures. Climate change isn’t a separate issue from all the other things we care about--like having a safe, reliable, efficient transportation system--and so it shouldn’t be treated as separate in our plans.

Minneapolis’ plan starts with a strong focus on climate: “We are focused on expanding transportation options for people walking, biking and taking transit – emphasizing low carbon and more affordable ways to get around. We are building a system for people that addresses our climate emergency.” Happily, climate isn’t treated as a separate concern from the rest of the goals in the plan.

For example, the “Prosperity” goal states: “To retain top talent, grow our educational and employment opportunities and continue as the economic engine of the region, we must provide mobility options that reliably move people, goods and services (including utilities) throughout the city while significantly reducing our climate footprint.”

2. Align your timeline with climate science

To limit the most catastrophic effects of climate change, scientists tell us that we need to immediately begin making big changes such that our emissions are down 45% by the time we reach 2030. The time for gradual change is over, and our plans need to recognize the urgency of our situation. Not only the trend of the change, but the pace of change is important.

Minneapolis’ plan recognizes that pace is important: “Trends from various sources show that we are making progress toward reducing single occupancy vehicle trips....While there is reason to celebrate these trends, the pace at which people are reducing their driving is far too slow to reach our goals.”

Minneapolis’ plan also has the right time frame: the next ten years. The next ten years are when transformative change must occur. I fear that transportation plans that look out much farther than that risk planning for a world that won’t look much like the one you and I grew up in. 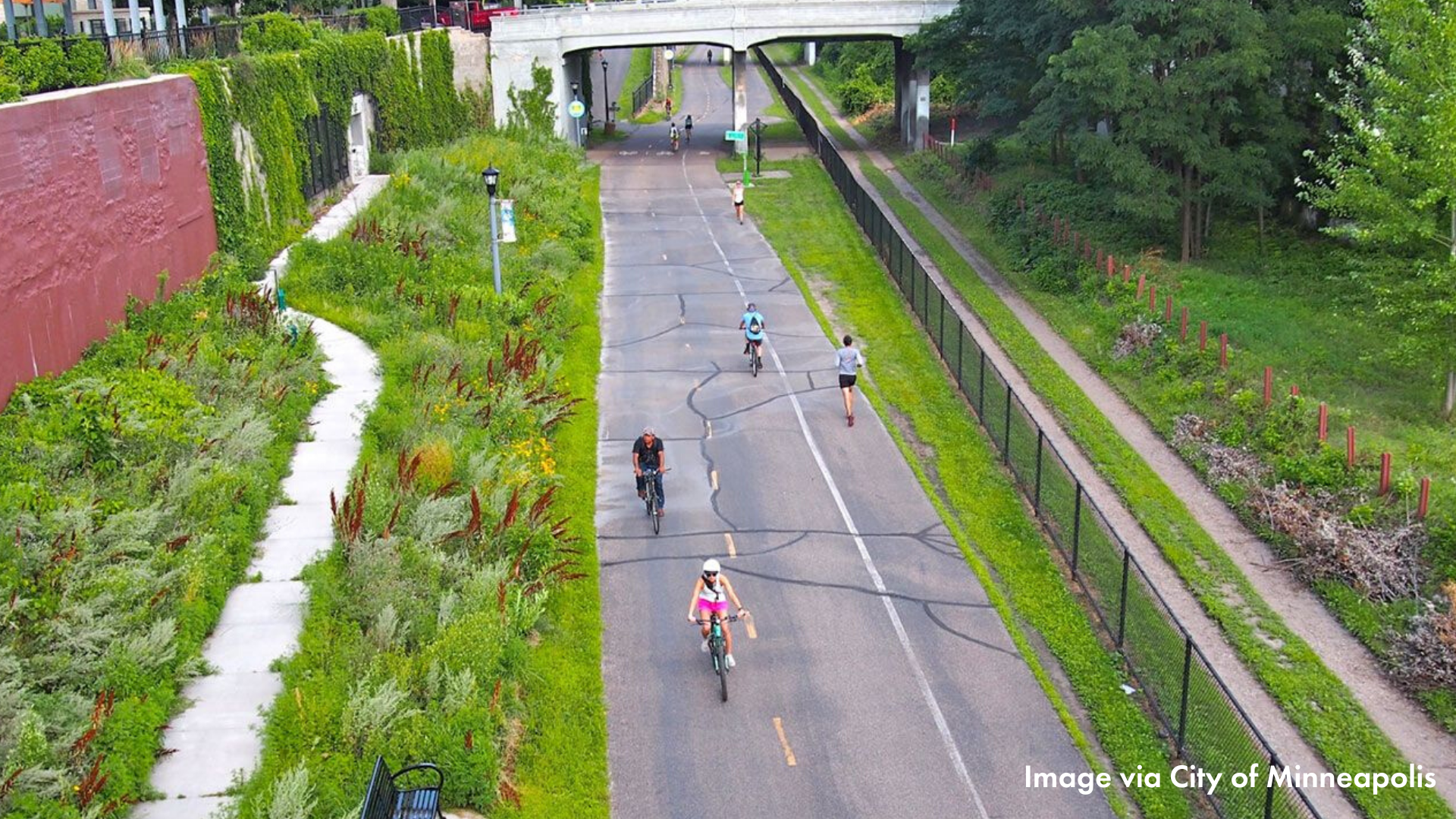 3. Re-frame streets as what they are: “land held in trust for the public”

I let out a whoop of glee when I read, on the very first page of the plan’s Executive Summary, “22% of the land area of the city is held in trust for the public within our streets.” While that may not seem like an earth-shattering statement, I assure you that, in the world of transportation planning, it is.

For decades, streets have primarily been viewed as little more than car sewers intended to move personal vehicles as quickly as possible and to store those vehicles at public expense for the 95% of the time they remain stationary. Lately, we’ve allowed some space for transit, biking, and walking on streets as well, as long as they don’t impede the flow of private vehicle traffic in any way.

Re-framing streets as “land held in trust for the public” is a real shift towards recognizing the value of that land and being open to using it in ways that actually serve the public interest. Mitigating and adapting to climate impacts is certainly in the public interest.

Setting a vague goal for more people to walk, bike and take transit doesn’t cut it in 2020. Communities need to establish baselines and set actual goals for shifting from carbon-intensive to carbon-light transportation modes on the timeline of the climate crisis (aka the next ten years).  Minneapolis sets out to “reach a mode share goal in pursuit of our climate goals where 3 of every 5 trips are taken by walking, rolling, bicycling or transit.” We highlighted all the ways Minneapolis plans to take action to support these modes in a previous post.

5. Set a goal for reducing driving

This is different than setting a mode share goal--this is about setting out to actively reduce the number of miles people drive in your community (Vehicle Miles Traveled or VMT in transportation-ese). Cutting VMT is essential for reducing emissions from transportation--electric vehicles alone won’t get us there.

Minneapolis sets a goal of cutting VMT by 1.8% per year, declaring that “as our population continues to increase, every effort will support reducing miles traveled in single occupancy and high-carbon vehicles because the health of our city and our climate depends on it.” 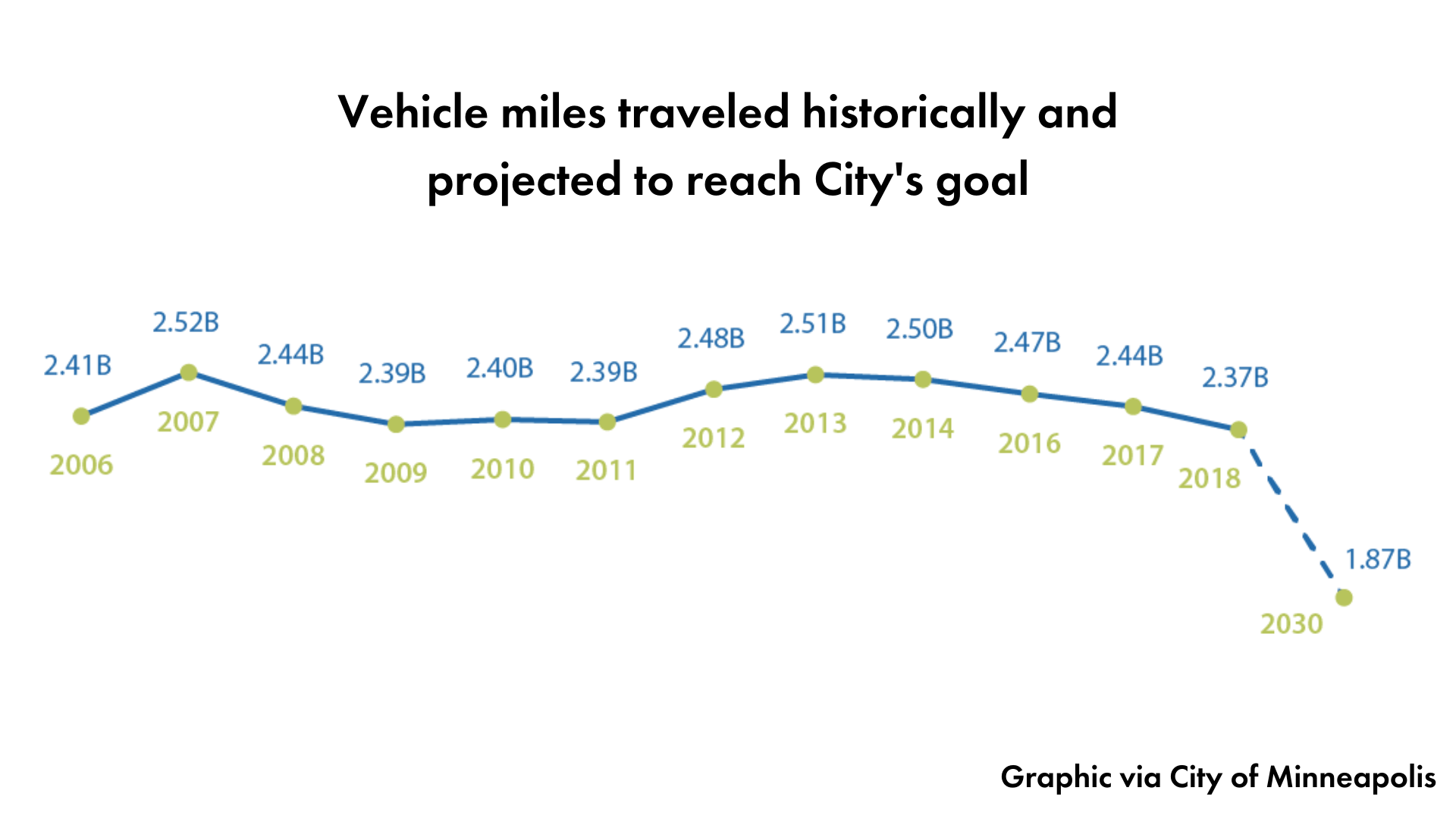 This is where nearly every transportation plan falls flat. It’s easy to encourage walking, biking, and transit, but it’s politically terrifying to discourage driving because the divine right of cars to our public space is so entrenched in our culture. We want our government to subsidize the things that improve our quality of life--things we want more of. Unfortunately, we subsidize driving and parking personal vehicles, when we actually want people to drive less and we want to use our public space for something other than storage.

Transportation plans in the 2020s must grapple with this misalignment of public subsidies and public goals. By providing free parking and not pricing the use of roadways, governments distort the transportation market, make it inefficient, and incentivize a mode of transportation that harms our health, safety, climate, and economy.

Minneapolis signals a willingness to move in the right direction, putting forward strategies such as “price and manage use of the curb to encourage walking, biking and using transit and to discourage driving alone” and “study congestion pricing with the intent to discourage single occupancy vehicle trips.”

7. Use public space for green infrastructure and trees

Because streets cover a significant amount of land, they play a role in adapting to climate impacts. We can use our public space to sequester carbon, clean the air, and manage stormwater. In Minnesota, flooding is one of the main climate impacts of concern. Storing water on-site, rather than letting it runoff into rivers, is essential to adapting to increased rainfall. Minneapolis aims to “use street design to provide a more comfortable and healthier environment for people – including more green infrastructure and trees in street projects.”

I hope for a final plan that is even stronger on climate action, and look forward to participating in implementing this plan and holding the City to their promises. I hope our city will inspire others to take the climate crisis seriously and transform their own transportation systems accordingly.

Head to the City's website to read the plan for yourself and tell them what you think online.