Like many, I awoke today with the tragic news that Marcus Nalls, who moved here recently from Atlanta and was a regular bicyclist, was killed while biking on Franklin Avenue last night. My thoughts are with his family and friends. No one should ever have to go through what they are today. If it is valuable for Mr. Nalls's family, we will host or support an event in the coming days or do anything else we can to support them.

Having biked Franklin more than a thousand times, it struck a close nerve for me personally. Like many others today, I can't help but know that this could have been me. Marcus, 26, was wearing lights and was unfortunately in the path of a reportedly drunk person who should never have been driving.

While this was clearly a case of a drunk driver, the sad reality is that Franklin Avenue has a long history of safety problems that have received too little attention. The unacceptable details are laid out in a recently completed Franklin Avenue report for Bike Walk Twin Cities and in the City's bicycle crash report from last year:

The Bike Walk Twin Cities report offers three potential improvements in this section of Franklin that could be implemented with just paint and community will. It says there is "potentially consensus" for "considering implementation of a road diet" in this section.

In light of yet another bicycle fatality related to drunk driving, I hope there will be more work done there. And in light of another crash on Franklin Avenue, I hope that Hennepin County and the City of Minneapolis will move past a consensus for considering and actually make some improvements now. Longer term, it certainly seems a protected bike lane would be valuable on Franklin. I don't want to have another Franklin crash where we have to ask: "what if there were bike lanes?" It's not fair to anyone who has been hit or rides on Franklin. 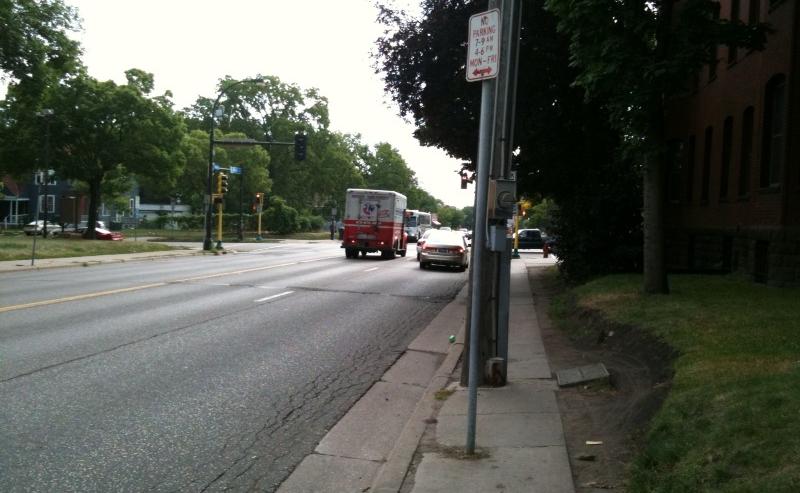 Franklin Avenue near Park Avenue, about a mile from the recent tragedy at Garfield. Narrow sidewalks, no bike lanes, and no left-turn lanes make this a problematic street.