Editor's note: This is a guest post from volunteer Prescott Morrill, who attended a May 30 meeting on downtown parks and potential green corridors that enhance biking and walking options. This was originally intended to run June 4, but got stuck in draft mode due to an error from me the editor!

Last Wednesday I got on my trusty knock-around bike, an old steel Schwinn with a coaster-brake, recently outfitted with a streamlined rack and fenders, and spun over to the Minneapolis Central Library for a meeting called “What’s Happening with Minneapolis Parks”.  Hosted by the Trust for Pubic Land, this was a public presentation/Q&A to let people know about all the public-space work that’s happening in our fair city. 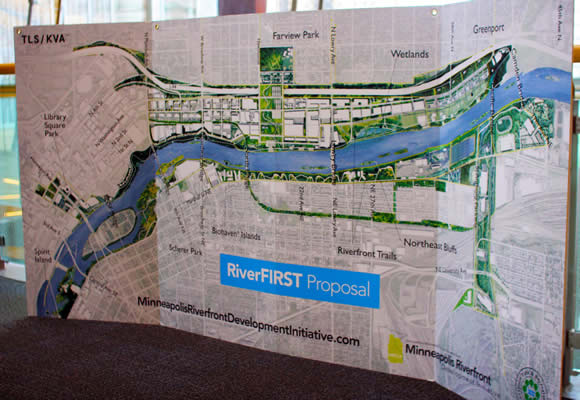 The crowd consisted of around 40 people, mostly middle-aged and older folks; a mix of downtown residents and commuters, and some of the local planning and design luminaries.

As both a biker and a recent graduate of master’s programs in landscape architecture and urban planning, I am interested in the future of public open space for a few reasons.  First, the ways these spaces are constructed and connected have huge implications for me as a cyclist.  More importantly, as my mid-20’s fade from my rear fender and I see my 30’s at the next intersection, I am understanding the context of history and the gravity public space decisions have for the city I am inheriting not just professionally, but personally.  This is our city, and as I become more educated in it’s mechanics and more invested in the quality of life it provides, I’m suddenly more interested in our direction.

The meeting was held in the Pohlad Auditorium in the Minneapolis Central Library.  The format was the standard digital slide presentation, some of it the loathed Powerpoint, and some of it flashy eye-catching park renderings.  Those speaking to the slides were David Wilson, a downtown business leader at Accenture, Bruce Chamberlain, Assistant Superintendent of Planning at the Minneapolis Parks and Recreation Board (MPRB), and Sarah Harris, Executive Director of the Minneapolis Downtown Improvement District (DID: the people in green).

Just as you might imagine, given the title, the presentations outlined all the various projects these movers-and-shakers have up their respective sleeves.  To be honest, the volume of material up there was astounding.   Here’s a quick run-down:

From the Minneapolis Parks Board, there was the Riverfirst project, part of the Minneapolis Riverfront Development Initiative.  Generally, this is a project that covers 5 miles of the Mississippi in the middle of Minneapolis.  It is meant to be a project which compliments the Grand Rounds, both in scale and connection.  It includes Gateway Park connecting downtown to the river, Water Works Park on the west side of the Stone Arch Bridge, connecting the Mill City district and down to the river, the Northside Wetlands Park at the barge terminal in North Minneapolis, and Scherer Park at Hall Island to be the flagship park in the system.

From the city, there was mentioned an address of the historic location of the Nicollet Hotel, currently a well-situated expanse of asphalt.  This piece of real estate is particularly interesting not only because it brings together three of the most historically significant arteries of the city, but also because of it’s proximity to Cancer Survivors Park, over the top end of the Nicollet ped/transit corridor. 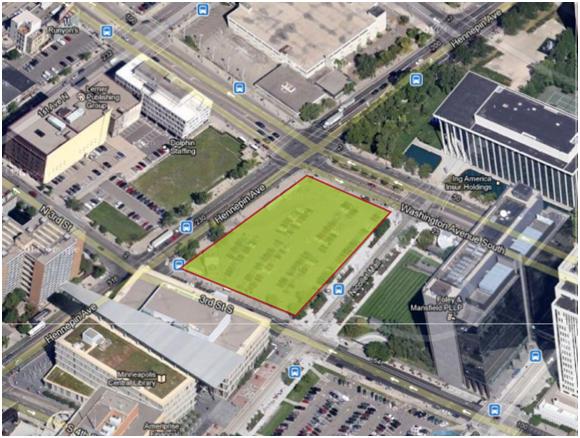 There was also talk of Gold Medal Park, whose maintenance is being handed over to the city in 2016, and the new Vikings Stadium plazas and tailgating areas, whose design processes are beginning now.

The DID, rather than thinking about new real estate, is focused on the renovation and upkeep of the current stock.  Peavey Plaza, in all of it’s contested glory, now has a demolition permit for the new renovation.  An enhancement of the Loring Greenway is in the works, as are renovations of Nicollet Mall as a better place for street cafes and urban vitality, and Hennepin Ave as a cultural corridor from the Sculpture Garden to the river.  Finally, (get your bike shorts on for this one) there is a renovation of Washington Ave downtown, that is considering how the street can be reformulated to prioritize bikes and pedestrians over automobiles (!).

So, the bulk of the content was focused on downtown in particular.   Why?

Because not only do we need to do some significant work there, but also, we are lacking a signature urban park space.  In other words, we have no real Central Park.  Yes, there is Gold Medal Park, Nicollet Mall as a transit/pedestrian corridor, Peavey Plaza, the Cancer Survivors Park, and others, but where is the epicenter?  Is there space for one (I’m thinking of a particular piece of asphalt)?

However, in recent years our city streets have lacked real maintenance.  While that is starting to change with the DID program, compared to other cities, there is a lack of investment there.  Just look at our urban street tree canopy (where is it?).

There was a great point made by David Wilson that maybe the lack of investment in the downtown public realm is because of the skyway system.  What does the skyway have to do with any of this?  If we are talking about a downtown that lacks a significant amount of public space, then we’re talking mostly about streets.

If we’re addressing the public realm but we aren’t talking about making new spaces, necessarily, (as demonstrated by the DID renovations) then we’re really talking streets.  Streets constitute the vast majority of the pubic realm in any city, and thereby demand attention and should enjoy investment, in terms of both money and civic pride.

But, why would the city invest in streets when we have such a cozy skyway?  At the risk of sounding like a socialist, the skyway is a privatized open space.  It does not belong to us as a citizenry.

This is not to say that the only considerable open space is completely owned/operated by the city.  We need public-private partnership.  What I mean is that the private side of the partnership should not, solely, be in control of the program of the open space.

At this point as both a biker (commuter, recreationalist, and mechanical nerd), and as a guest blogger for the Minneapolis Bicycle Coalition, I’m wondering what all this has to do with biking.  Here we have three panelists talking about downtown, the public realm and a smorgasbord of projects.

So, where’s the connection to bikes, biking, and bikers?  It was obscure, as that was not the explicit focus of the meeting, but trust that it’s there.  How do I know?  Because, as a planning nerd, I pay attention to the background: the processes that brings us these wonderful ideas, plans, and diagnoses of our public realm.   Most, if not all of the firms and organizations have had the forethought to include representatives from the cycling community on design teams, advisory committees, and as part of public participation processes.

In talking with Bruce Chamberlain, I asked him how cyclists, and bike commuters specifically, fit into the Riverfirst Development Initiative.  Like anything else, he related that there is a balance between the needs of commuters and recreationalists.  Consider the East and West River Parkways, for example.  Originally, they were created for leisure: as a space to escape the urbane and enjoy nature, to relax, to promenade, or to go for a Sunday drive.  They still serve those purposes today, but they are also fantastic ways to get from point A to point B on two non-motorized wheels.  It doesn’t take a great stretch of the imagination to think that the Riverfirst project, spanning miles of river corridor, can’t serve a similar suite of programmed functions.  This speaks to the ideas of overlapping uses, and systems thinking: serious buzzwords in the world of landscape architecture.

In essence, Mr. Chamberlain related that while the MPRB has a large mission that includes a wide variety of services, he fully understands the value that bike infrastructure, both recreational and commuter, brings to a project.

Finally, as I spun away from the meeting, having awkwardly milled-about with people I either don’t know, or only recognized from various guest presentations at school, I grabbed my new panniers and hit the road.  As I headed east down 4th St, I passed a Nice Rider midblock and turned to see what a guy in an expensive suit was doing riding a rental bike.  Turns out it was none other than David Wilson, headed back to the Accenture offices.  With no one else around, he clearly wasn’t doing this for publicity.  In total, this experience left me with confidence that the folks making the decisions that are shaping what we will inherit as public open space are in fact, headed in the right direction.

Author Bio: Prescott Morrill is a recent graduate from the College of Design and the Hubert H. Humphrey School of Public Policy at the U of M in both landscape architecture and urban and regional planning.  In addition to volunteering with the Minneapolis Bicycle Coalition, Wilderness Inquiry through the National Park Service, and the Minnesota Design Team, Prescott is working on the Bike Pasture project at the U of M, and the Starling Project along the Central Corridor line in St. Paul.