The Case for Bike Lanes on Penn Avenue North

Penn Avenue North is being repaved from West Broadway to Dowling Avenue North by Hennepin County this year, providing an opportunity to add bike lanes at little extra cost.

Lined mostly with single-family residential homes, Penn Avenue N has been identified as a missing gap in the City of Minneapolis Bike Master Plan, adopted last year.  Penn Avenue N is an important connection, bringing residents from north Minneapolis residential neighborhoods to transit stops, commercial nodes and connecting to the Grand Rounds.  Once the Lowry Bridge re-opens with fantastic bicycle facilities, Penn Avenue N will provide a bicycle connection along Lowry to NE Minneapolis and downtown.

Given the importance of this connection and given Hennepin County’s Complete Streets Policy, the question about Penn Avenue N should  be how to improve bicycle access in this corridor, not if.  However, the County currently does not plan to include bike lanes in its repaving project.

In this segment, Penn Avenue N has:


One issue on Penn Avenue N is the street’s width – it is 44 feet from curb-to-curb.  With on-street parking on both sides, the street is too narrow to provide wide bike lanes or wide parking lanes to give cyclists a lot of space.  However, this street still seems like a very good candidate for bike lanes.

Nearly 100% of people bicycling on Penn Avenue N appear to be riding on the sidewalk.

By narrowing the vehicle traffic lanes to 10’, the County could provide a 5’ bike lane in each direction with 7’ parking lanes.  There may be concern about using these measurements on a transit corridor, but the City of Chicago has done so routinely since the 1990s and has found safety improvements and crash reductions on those streets.  The City of San Francisco recently incorporated bike lanes onto 17th Street in the busy Mission District, using 9 foot travel lanes, 5 foot bike lanes and 8 foot parking lanes, on a street used by “dead head” buses. 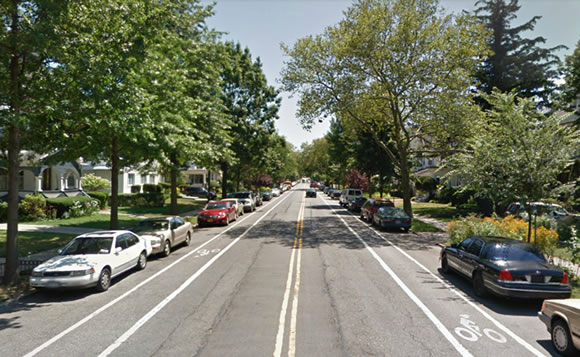 There are many benefits of adding bike lanes to Penn Avenue N:

Given the characteristics on Penn Avenue N, I think it is a good candidate for a 10-5-7 configuration.  Advisory bike lanes could be another option, though with traffic volumes above 6,000 ADT, a center line would typically be striped.  Looking at this street, I would ask this question – “what would be safer for all users than what is out there today?”