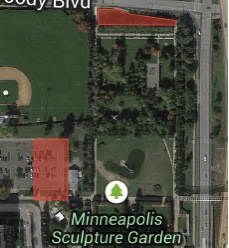 Our aim at the Minneapolis Bicycle Coalition was to advocate for a protected bikeway running along the west side of Lyndale Ave S connecting the future Dunwoody multi-use path and the existing bike lanes on Vineland Place and the Loring Bikeway (as shown in orange on this map). 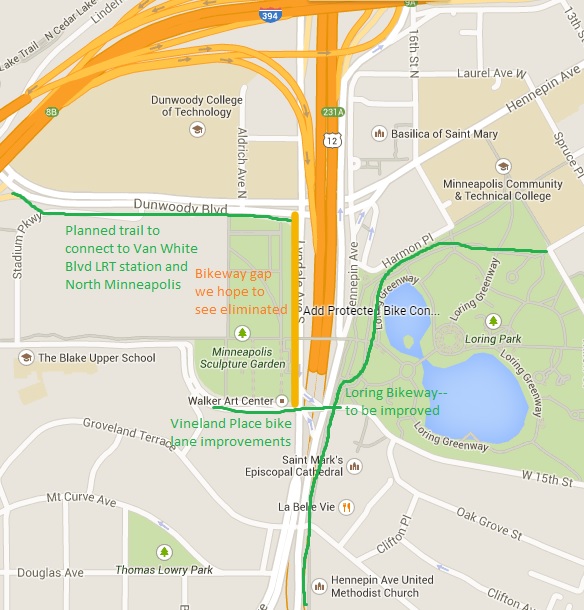 Given the added boulevard space that the Hennepin-Lyndale Bottleneck reconstruction is going to provide (here is the full schematic), the time seemed right to get this into the Sculpture Garden plan. Initial responses from the design team were that the bike path was not part of the scope of the project, that Kimley Horn was still working on sidewalk issues there. After some pushing on our part, the Park Board admitted that the bike path needed to be addressed. Unfortunately, the Park Board has been unable to resolve the problem of the so-called pinch point where the pedestrian bridge meets the sidewalk (see picture). According to MPRB, there isn't sufficient space, so it will require further study. The City's recently-released Protected Bikeway Update to the Bicycle Master Plan echos this evaluation. So it remains in limbo. 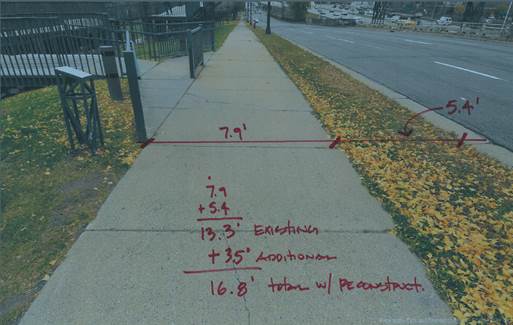 Despite this trail's uncertain future, there are some modest bike-related gains that came out of the Sculpture Garden reconstruction. There will be enhanced bicycle parking at the Garden's west entrance near the parking lot, and there will be new bike parking added at the north entrance of the Garden on Dunwoody. In addition to this, the Walker Art Center's plans for a new entrance to the museum on Vineland Place will ostensibly include lots of bike parking; see the layout for yourself.

Even though bike parking is great and will go a long way toward making the Garden more easily used by those of us who want to ride over for some minigolf, some art viewing, or for bigger events such as Rock the Garden, we're disappointed that MPRB was not more willing to include some solution for bicyclists connecting from Dunwoody/Van White Blvd to the Loring Bikeway in the reconstruction project.

Given the looming start of the Bottleneck reconstruction, the Sculpture Garden reconstruction, and the Walker's transformative greening project, now is absolutely the time to build a solution here that improves connections for people biking and reduces conflicts between people walking and biking. This area will be almost unrecognizable (for the better) by 2018, but it'd be just that much better if we can get this trail gap filled and connect the Dunwoody trail to our wonderful Loring Bikeway.