With bike-car crashes, report on driver behavior, not just the bicyclist

Over Easter weekend, a bicyclist in Minneapolis was hit from behind by a driver; the bicyclist sustained critical injuries. A follow-up Star Tribune article about the crash focused on how and where the bicyclist was riding at the time of the crash.

There is a repeated pattern in news coverage of bicycle-car crashes for journalists to fixate on the bicyclist’s behavior and not report on the driver’s behavior (even when drunk driving is involved).

In this situation, the local news coverage focused on the police statement that said she was riding in the "proper location."

From the Star Tribune article:

[She] was riding “on the right side of the right lane” at the time the car hit her from behind, said Police spokesman John Elder, who added that her position was correct for that stretch of road. There is no sidewalk on eastbound Excelsior for bicyclists to use.

To many readers, the reporting of an official police statement about a crash seems rational. But the issue here is that the reporting is one-sided. There is nothing said in the article about the driver. This type of reporting can also be seen in the coverage of Marcus Nalls, a “careful” bicyclist who was killed by a drunk driver in Minneapolis a few years ago. My commentary on that news coverage is similar to what I want to discuss here. In this case, I am interested in what “proper positioning” means as it does not reflect actual bicycle laws.

In fact, according to bicycle educators, riding in the right side of the right lane (as pictured) is actually the most dangerous because drivers think they can scoot around you, which pushes you even further into the curb. Bicycle educators instruct people that riding in the middle of the lane is the safest for all people on the street. 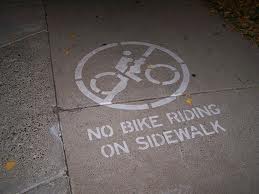 Another part of the statement focused on the victim’s non-choice to ride on a sidewalk. For safety reasons, bicyclists should not ride on the sidewalk. To be clear, whether there was a sidewalk is completely irrelevant to this crash. Because bicyclists have the right to a lane, even on busy streets, there is little incentive to ride on the sidewalk. But what about safety as an incentive? To many people riding on the sidewalk feels safer. But according to bike educators, biking on the sidewalk really limits your visibility. Drivers don't expect to see you there. The only exception to this sidewalk rule are the few places where a bicycle trail runs along the road as if it were a sidewalk. In this case, no car traffic would be allowed to cross in front of you without some kind of controlled intersection (this is not the case when biking past parking lot entrances). From a rights-to-the-road perspective, no bicyclist should be compelled to ride on the sidewalk as if they are not allowed on the street.

Now to get to the nitty gritty rhetorical power of journalism. By reporting on the "proper" biking of the victim, the implied argument is that only proper biking can result in a blameless outcome. If the victim wasn't in the proper location, would the blame be on her for her “careless” biking? And if so, what would that blame result in? I would guess the continuation of the stereotype that bicyclists are dangerous and nuance.

Perhaps my biggest concern is the lack of information about the driver (who is alive and well and cooperating with the police). The lead is the most important sentence in a news story, and in this article the lead focused on the bicyclist’s behavior. A more objective piece would report on the driver's location as well. I would assume the driver was not in the proper location because they crashed into the bicyclist. I am curious whether the police spokesperson and/or reporter know whether the driver was on their phone. Were they turning the dial on the radio? Distracted trying to get somewhere in a hurry? Distracted driving is a serious threat to all of us and I know bicyclists fear this a lot. I’d love to see more reporting on drivers when they are involved in bike and ped crashes.

My thoughts go out to the victim (who I am not re-naming because of the trigger that can bring people who know her).