Hennepin County just recently opted not to seek Federal funds in the reconstruction of Marshall St NE (CSAH 23), from 1st Ave NE to St. Anthony Parkway. This reconstruction would have surely included a protected bikeway between 10th Ave NE to 27th Ave NE, seeing as Marshall Street is identified as a future bikeway in the County’s bike plan and it is also designated as a protected bikeway in the City's bike plan.

Marshall St NE for Everyone

Marshall St NE has been identified by the four adjoining neighborhood groups, Marshall Terrace, Bottineau, Sheridan, and St. Anthony West as a corridor that needs bicycle and pedestrian improvements. County maintenance staff have identified that pavement on Marshall will need to be replaced in 3-5 years. The maintenance costs for this corridor are high because of the crumbling (literally) infrastructure, so reconstruction should happen sooner rather than later.

A few years ago the county and Minneapolis Parks extended on-street bike lanes on Marshall from 1st Avenue NE to 10th Avenue NE. The County's funding proposal continued the bikeway northward from 10th Ave NE to 27th Avenue NE which connects to several bikeways. There are a lot of industrial and commercial uses along Marshall St NE, with retail and entertainment uses growing.  There are four Nice Ride stations on Marshall, and people want to use Marshall for walking and biking!  But it does not feel very safe or comfortable to do that now.

Stakeholders have been meeting for over a year

For over a year, the Bicycle Coalition has been meeting with a group of stakeholders, including the neighborhood groups, city and county staff, and Minneapolis Parks, all convened by the Minneapolis Riverfront Partnership. Our goal is to move the reconstruction of Marshall forward, putting all of the plans and visions and engagement that have included Marshall as a great pedestrian and bike corridor, into action.  United, because we could all agree that the walking and biking environment along Marshall Street has to be better.

The vision of the group

From this group came a parking study to look at how parking lots and on-street parking are used. The details of this study will be released very soon.

Hennepin County's proposal was not submitted for funding

This is a huge disappointment.

To break down the process a bit:

County staff proposed a Marshall St NE Reconstruction project to County Commissioners for regional solicitation.  Some projects were submitted to TAB (Webber Parkway, Penn Ave, Golden Valley Rd), while Marshall St NE was not, after review by some commissioners.  This means that even if we apply in a couple years and are somehow more competitive than this year, we will have to wait until 2022-2023 for funding.  Will the pavement hold up?  Will an interim repaving have to happen, with a costly reconstruction later that will have to tear up that repaving?  I'm not sure.

We talked to people about Marshall at Northeast Open Streets, and despite this huge setback funding-wise, people were energetically supportive of this proposal to work on Marshall as a biking and walking corridor.  We polled 289 folks. 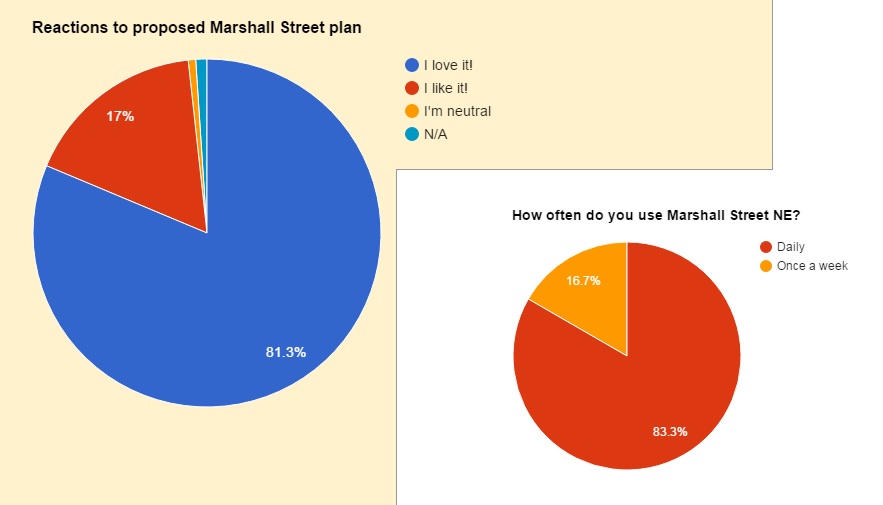 Please keep filling out the survey, because we need to keep building support for this reconstruction!  Stay tuned for next steps, including the release of the parking study.