Protected Bikeway on Washington: Inches & a Handful of Parking Spots Away

Next year, Hennepin County will finish its reconstruction of Washington Avenue from Hennepin Ave to 5th Ave in downtown Minneapolis. It will have world-class sidewalk-level protected bikeways. We hope that this top-notch bikeway will connect to protected bike lanes that extend to the University of Minnesota to connect the two biggest destinations in Minneapolis. But currently we are inches short of that. We hope to get there in the coming months with your support! 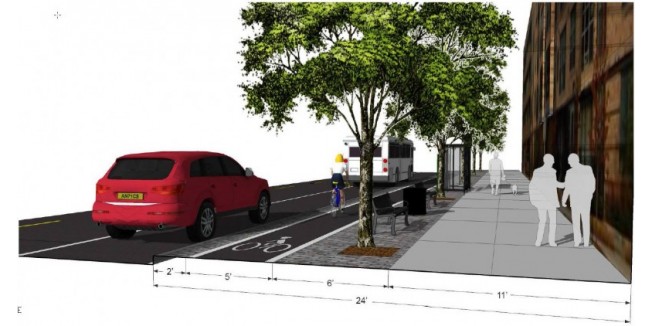 Rendering of under construction Washington Ave from 5th to Hennepin

Also in 2017, the County will restripe the lanes on Washington Avenue from 5th Ave to I-35W. This restriping will reduce that part of Washington from three lanes to two, leaving room for full-time parking and bikeway. That change is approved and was deemed feasible after detailed traffic analysis in the area. It is a fantastic opportunity to extend the protected bikeway on the reconstructed segment almost to the University of Minnesota (the rest also is planned and could be done next year as well). This route is outlined in the City of Minneapolis’ protected bikeway plan.

But, at this point, the county is not going to take the opportunity for a protected bike lane. And they are saying we have to wait for a reconstruction project at some undetermined future date more than a decade away. Because of literally inches. 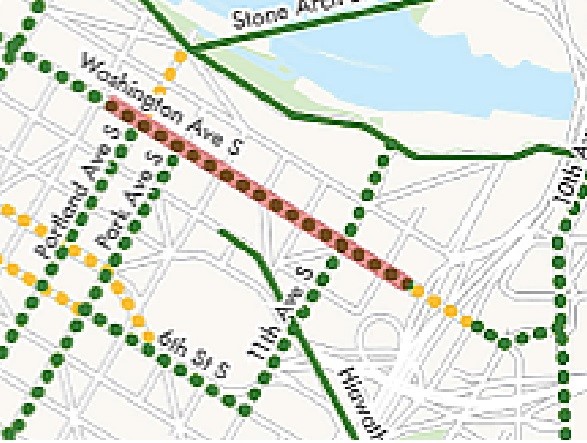 What is the county currently proposing for this bike connection?

The county is currently planning to install a traditional, sometimes-buffered, bike lane between the car lane and curbside parking lane. 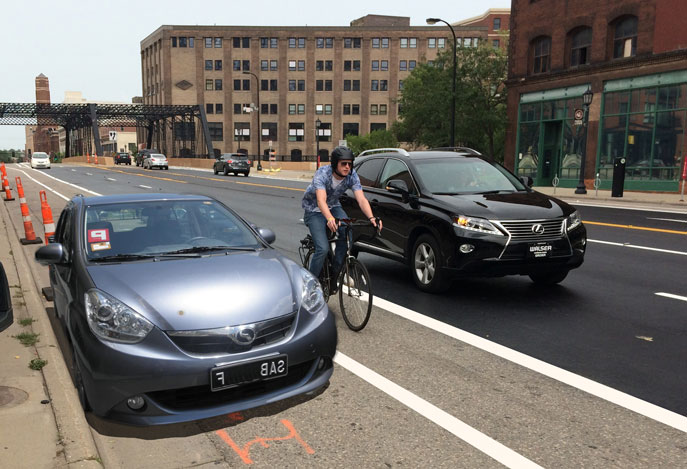 A visualization of the county's proposed design on a narrow block.

Why did the county decide to do this? At a meeting with the Downtown Minneapolis Neighborhood Association, a representative from the county stated that the corridor was too narrow to implement a parking-protected bikeway. This is mostly driven by the presence of medians that cannot be removed without undue expense and an unwillingness by the county to use narrower than 11-foot car traffic lanes (more on that later).

Specifically, the county was concerned about a small number of pinch points where there would not be enough space for a three foot buffer and six foot bike lane outside the two foot gutter pan. The county’s fears are understandable.

But, the bikeway only has to be too narrow because of the assumption that the traffic lanes have to be 11-feet wide with an extra 2 feet of space adjacent to the inside median. By narrowing traffic lanes just slightly in line with what happens in many places, it is possible to create a comfortable parking-protected bikeway on Washington between 5th Ave and I-35W. We'll get to those details of how, but first...

Why is this bike connection important?

There are two important reasons this protected bikeway should be implemented next year.

First, as stated above, this protected bikeway would provide a direct connection between the University of Minnesota’s West Bank Campus and downtown Minneapolis. Right now, the best alternative to Washington Avenue for making that connection is the Bluff Street Trail under the I-35W bridge.

That connection is insufficient because: 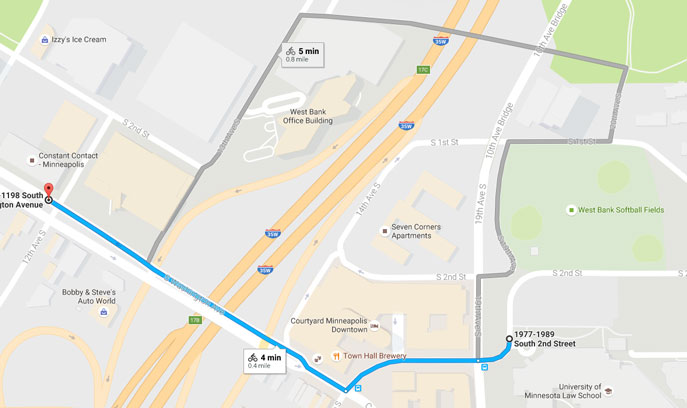 To illustrate this, the 2015 bicycle count by the City of Minneapolis shows that 410 bicyclists opt for Washington Ave every day even with the Bluff Street Trail as an alternative and even though Washington Ave is a terrible street to bike on currently.

How can we make a protected bikeway work?

There are two slight changes needed to make a parking-protected bikeway possible:

In the county’s current plan, the travel lanes are, at minimum, eleven feet wide with an additional 2 feet "curb reaction" next to the median. This is in contrast to the County's design for Washington from 5th to Hennepin, which includes 10.8-foot lanes. The City of Minneapolis redesign of 3rd Ave S reduced lane widths to 10.8 feet through half of the corridor and to 10 feet for the other half. The County's Cedar Avenue has four 10-foot lanes in a six block stretch about a mile from this location (and no extra width adjacent to the curb). The Minnesota Department of Transportation allows (where appropriate) 10-foot wide traffic lanes on state highways with speeds up to 45 mph. The Minnesota standards for roads like Washington are in the process of being updated to allow narrower lanes on streets like Washington.

There simply is no justification for maintaining 11-foot car lanes at the expense of a protected bike lane on a downtown street. Even 10.5-foot lanes with a 1-foot "curb reaction" provide enough space throughout the whole corridor (expect a couple spots where parking would need to be removed).

Narrowing the travel lanes would also improve safety for all users of the street by reducing travel speeds closer to the 30 mph speed limit.

One of the benefits of narrowing Washington from three lanes to two in this stretch is that street parking on Washington Ave, currently allowed during off-peak hours only on much of the street, will become full-time. Because of this overall parking gain, it seems reasonable to remove parking on the 3 block faces where the street is narrower (too narrow even with narrower car lanes) in order to accommodate a protected bikeway.

Here is a look at a typical block of Washington Ave right now...

Volunteers created a concept of what a parking-protected bikeway could look like on Washington. This concept narrows travel lanes to 10.5 feet and removes parking between 5th Ave and 6th Ave and on one side between Chicago Ave and 9th Ave. It also includes white poles, or bollards, to clearly state where cars should be parked and where bicyclists should ride (we'd hope to have better implemented than some recently). In some sections, planters could be used instead of bollards and that would be our strong preference.

A typical block for the protected bikeway would have a six foot bike lane (including the two-foot gutter pan) and a three foot buffer between the bike lane and parked cars. It includes a 8-9-foot wide parking lane.

That would look similar to this from Chicago... 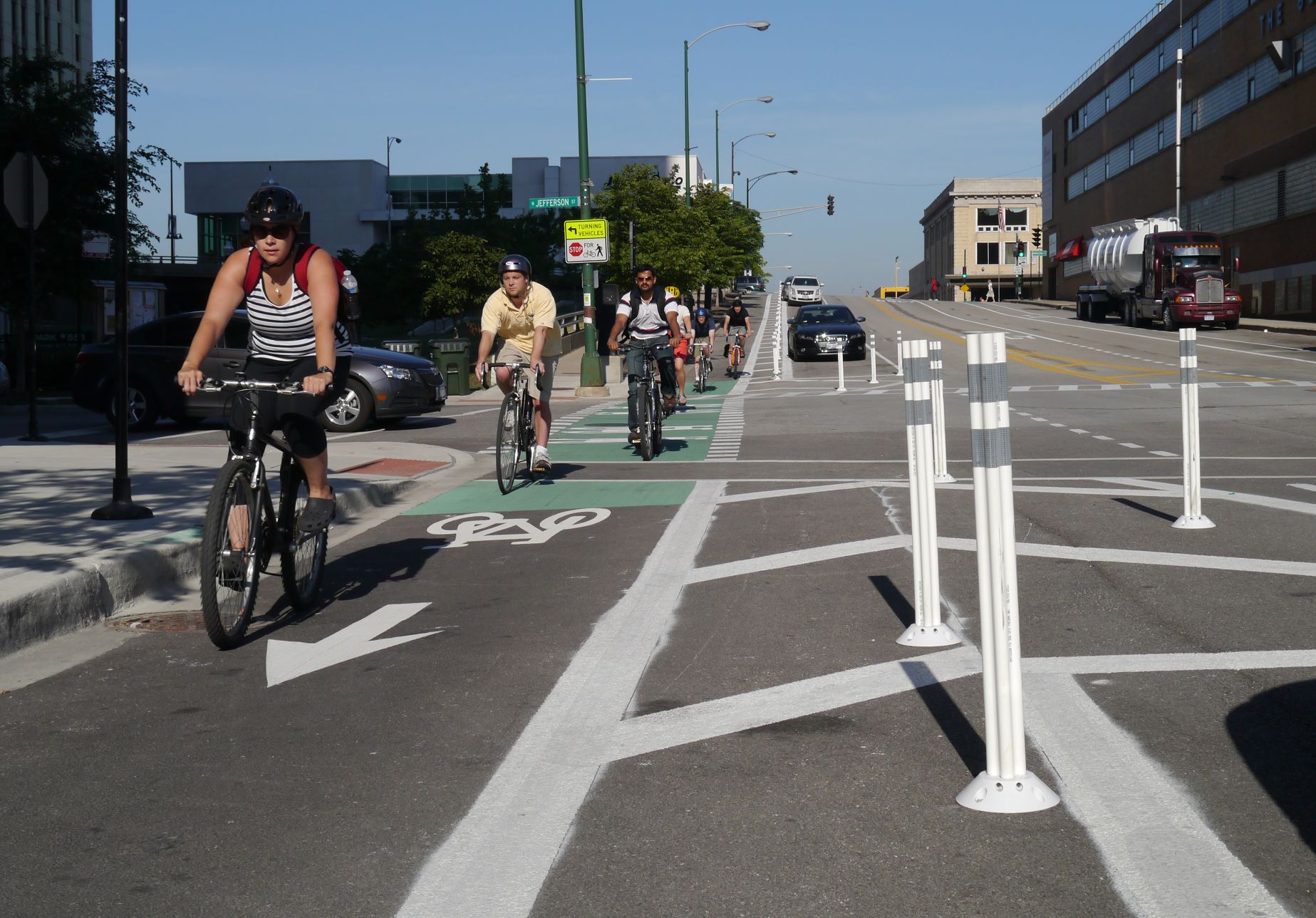 I think that is way better for this critical connection and worth inches. This could be amazing next year!

I hope the county will work out doing a protected bikeway now that they have more flexibility in standards. I hope the county takes this opportunity instead of kicking the can decades down the road.