As Our Streets Minneapolis celebrates our 10th anniversary, we're taking a look back at some of the volunteers and groups that helped us get where we are today. As a community driven organization, we depend on local folks lending their skills and time to our movement.

Grant Boelter started volunteering with our organization in 2011 when it was called the Minneapolis Bicycle Coalition and went on to serve on our Board of Directors from 2013 to 2018. Grant's work with Our Streets Minneapolis includes advocating for protected bike lanes on streets like Washington Avenue downtown, and lending his expertise to our fundraising and communications work.

Join us as we thank Grant for building our movement and paving the way for our future. Check out the interview below to learn more about Grant's motivation for doing this work, and his vision for our city. 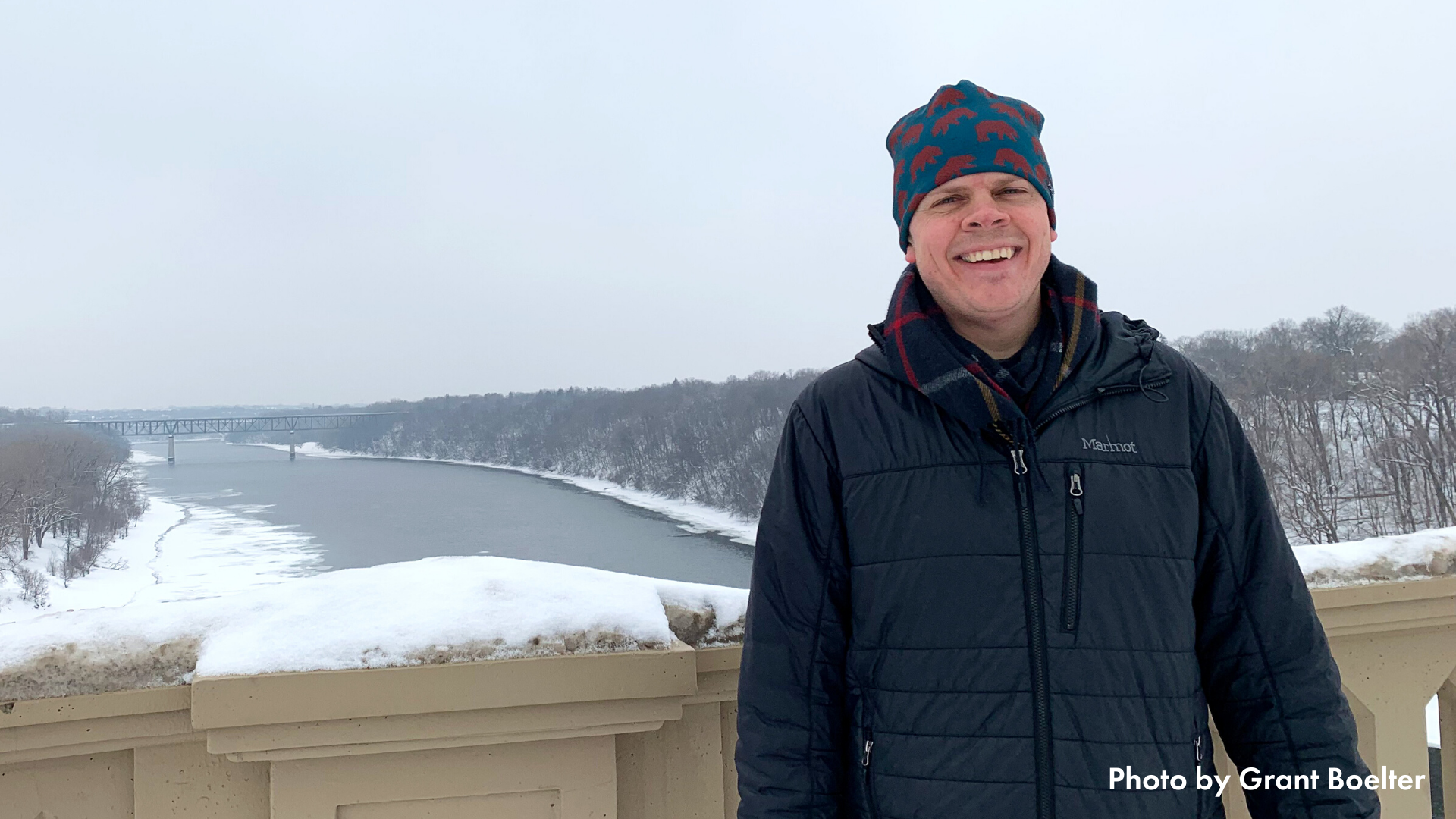 Tell us a little about yourself. How do biking and walking fit into your life?
I live in the Seward Neighborhood with my wife, Julie Umhauer, and our American English Coonhound, Annie. I work in communications for Meals on Wheels. I enjoy being able to get wherever I can by bike and feel like walking is the optimal way to experience my neighborhood and life in the city.

I enjoy biking and walking both for the physical and mental health benefits, but probably most for the social benefits - running into old friends and increasing the chance to make new ones.

What is your favorite place to walk in Minneapolis? What do you like about it?
I love walking and lingering on the Franklin Avenue Bridge. The views of the river are spectacular. I'm so thankful Hennepin County chose to bring car traffic down to one lane in each direction when they rebuilt the bridge a few years ago. With so much space dedicated to people and separated from cars by a barrier, it makes it easy for us all to exist together.

The well-designed crosswalk on the west side of the bridge is also a great example of how driver behavior really can be improved with infrastructure. It was so stressful to cross there before it was redesigned! Now people drive slower and are much more likely to see people crossing.

What inspired you to work for better biking and walking in our community?
It all started when my wife, Julie, reintroduced me to the joy of biking after I had kind of forgotten about it after college. I got hooked on biking. It made me feel great to get around that way. I wanted to do what I could to make it easier for people to experience that joy.

It only took a few times biking on or near roads like Lyndale Avenue or the worst parts of Franklin Avenue to see why people might be apprehensive about getting on a bike.

Getting a dog about six years ago really opened my eyes to some of the barriers that we place in front of people who get around by foot or wheelchair. Annie, our dog, ensures that we get out every day in all conditions. We see how challenging it is to get around in the winter when street corners are barricaded by ice banks. We notice where it's too dark to feel comfortable walking at night. We run into our 80-year-old neighbors who like to walk for exercise, but walk in the street because the sidewalks are too uneven and make them afraid of falling.

Walking, rolling, or biking without fear of death or injury seems like a pretty basic right in my book - one that's well worth fighting for.

How did you first become connected to Our Streets Minneapolis, then the Minneapolis Bicycle Coalition?
Again, it's a credit to my wife Julie. She went to a meeting of the old Projects Group that would identify key opportunities to make street improvements for people on bikes. She told me that it would really be a great place to get involved.

The group consisted of folks who had so much more knowledge about bike infrastructure and the political process for getting projects done than I could ever dream of having, and were so welcoming at the same time. It was so much fun to learn from people like Ethan Fawley (our first Executive Director who was the Board Chair at the time), Robin Garwood, Lisa Bender, and too many others to name.

How has the Minneapolis bike network changed since you first started doing this kind of work?
When I first joined the Coalition, Minneapolis had just finished striping a bunch of new bike lanes. But, there was only one protected bikeway on 1st Avenue downtown and it wasn't quite up to today's design standards. So much has changed for the better for biking since then!

The amount of protected bikeways being built seemed unfathomable when we started. It was such a struggle just to get one considered on Washington Avenue downtown, for example. While I'd still love to see the materials used to build protected bikeways become more permanent than plastic bollards, along with more connections built, the number of new bikeways that have been built in this short time is so encouraging.

And it never would have happened without so many volunteers at Our Streets who felt strongly that a network of protected bikeways was necessary to make things safe and comfortable enough for most people to give biking a try!

Do you see those same improvements in our walking network?
Unfortunately for walking, I can't point to a lot that is drastically different or better. It's been nice to see reductions in car travel lanes and I'm glad we're making progress toward better snow clearance, but there's a lot of room for improvement.

What were the biggest challenges you faced in this work?
We've all been conditioned to some extent to accept a default reality where cars get first consideration in how we move through a city. It takes time to shift people's perspective, which can be frustrating when lives are at stake because we encourage car travel at dangerous speeds on streets we all need to share.

I think the city as a whole is coming around, but we still have a ways to go before it would feel like the safety of people walking and biking is prioritized over expedient car travel.

What's your vision for the future of transportation in Minneapolis?
I would love for it to not feel like a disadvantage if you don't want to or can't afford to own a car.

If you could change one street in Minneapolis overnight, which street would you change?
Lake Street. It's so culturally rich and so unfriendly to people who bike and walk. I'd limit car travel to one lane in each direction, add bus-only lanes, install a protected bikeway, commission a bunch of street art (including art on the street itself!), and find some smart people to make the Hiawatha and 35W underpasses safer and friendlier to people walking and biking.

The Lake Street Open Streets is by far my favorite one because you can see how much potential lives there when you remove the cars.