As Our Streets Minneapolis celebrates our 10th anniversary, we're taking a look back at some of the volunteers and groups that helped us get where we are today. As a community driven organization, we depend on local folks lending their skills and time to our movement.

Join us as we thank Colin for building our movement and paving the way for our future. Check out the interview below to learn more about Colin's motivation for doing this work, and his vision for our city. 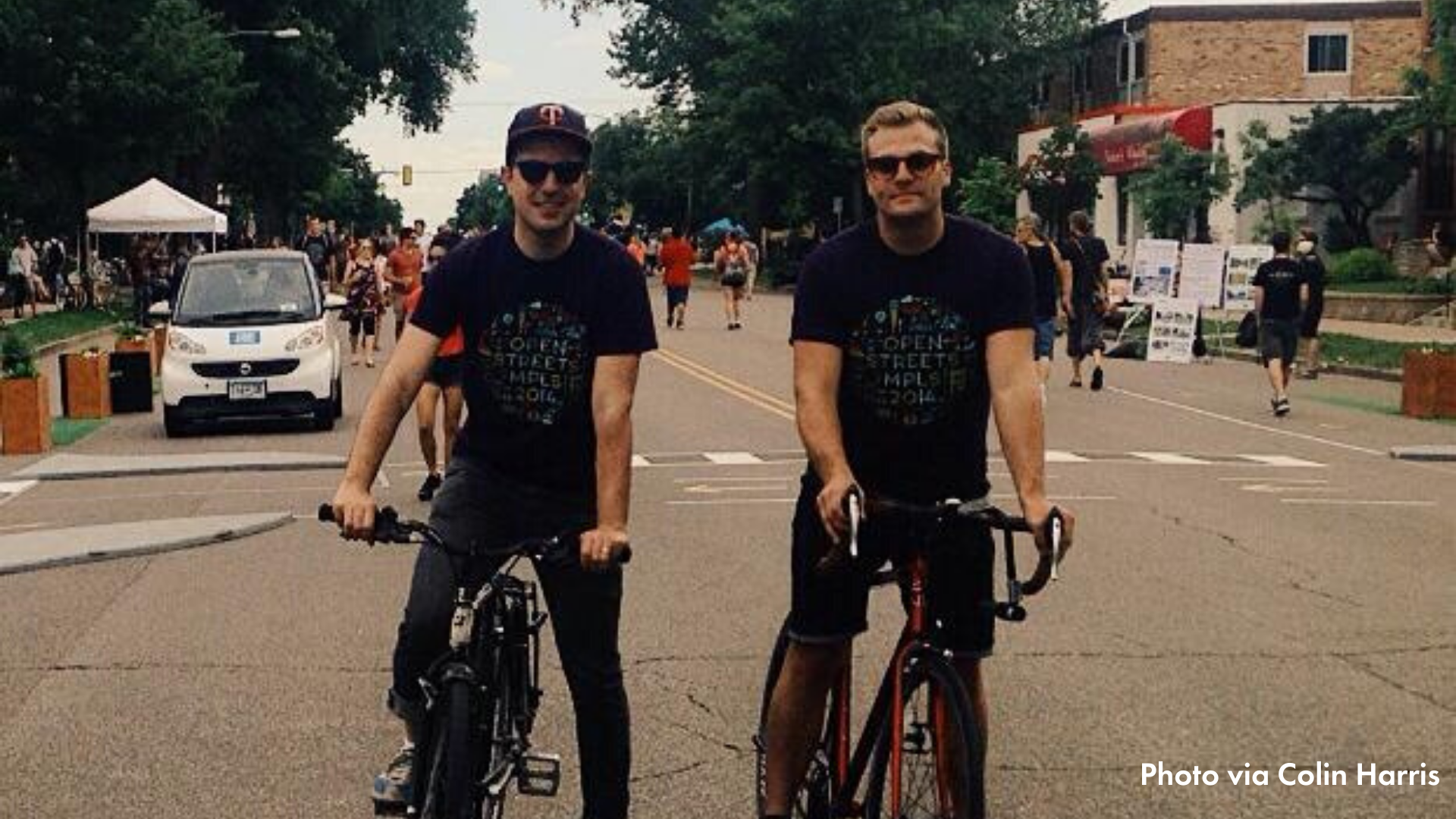 Tell us a little about yourself. How do biking and walking fit into your life?

I live in Minneapolis and bike, walk, or take the bus to get around the city. My daily bike commute to work takes me from Lyn-Lake to Seward on the scenic Midtown Greenway. You can see me on my treasured Metrofiets cargo bike in the summer or my fat-tired snow bike in the winter. I live with my partner Jane and our two-year-old daughter, Estelle. We enjoy going outside together as a family to walk, bike, and enjoy our streets.

What is your favorite place to bike or walk in Minneapolis? What do you like about it?

As much as I enjoy the Midtown Greenway, my favorite places to bike are probably on one of the many new separated bike lanes around the city. Biking along a separated bike lane is a great way to experience and interact with the city. I also love to visit the trails and bridges along the Mississippi River. And, of course, nothing compares with walking and biking on a street during Open Streets Minneapolis.

What inspired you to work for better biking and walking in our community?

When I moved to Minneapolis in 2008, I began to explore the city by bike and met several people who were beginning to organize and advocate for biking in Minneapolis. I went to my first public meeting for bike infrastructure in 2009, and shortly thereafter became part of the founding group of the Minneapolis Bicycle Coalition. We decided that Open Streets / Ciclovía would be one of the primary advocacy areas, and I volunteered to lead that initiative.

What was biking and walking like in Minneapolis when you were working with others to start the Minneapolis Bicycle Coalition?

Walking and biking was very low-stress and comfortable in certain places, such as along the trails near the lakes. However, there was very little on-street bicycle infrastructure, and walking was very uncomfortable on many streets—primarily streets designed to prioritize high volumes and speedy movement of cars. A lot of my inspiration came from imagining a city that took the characteristics of a trail, and applied them to the streets. What if we could have a network of separated bike lanes, low-stress shared streets, and sidewalks that connected the neighborhoods throughout the city? What if we could see what it would feel like, just for a day, to transform streets like Lake Street and Lyndale Avenue into streets for people by completely removing motorized vehicles?

How has the city changed since you first started doing this kind of work?

With the coordinated effort of many other volunteers, I hosted a regular Open Streets Minneapolis planning meeting starting in 2009 with the hopes of having the first event in the spring of 2010. 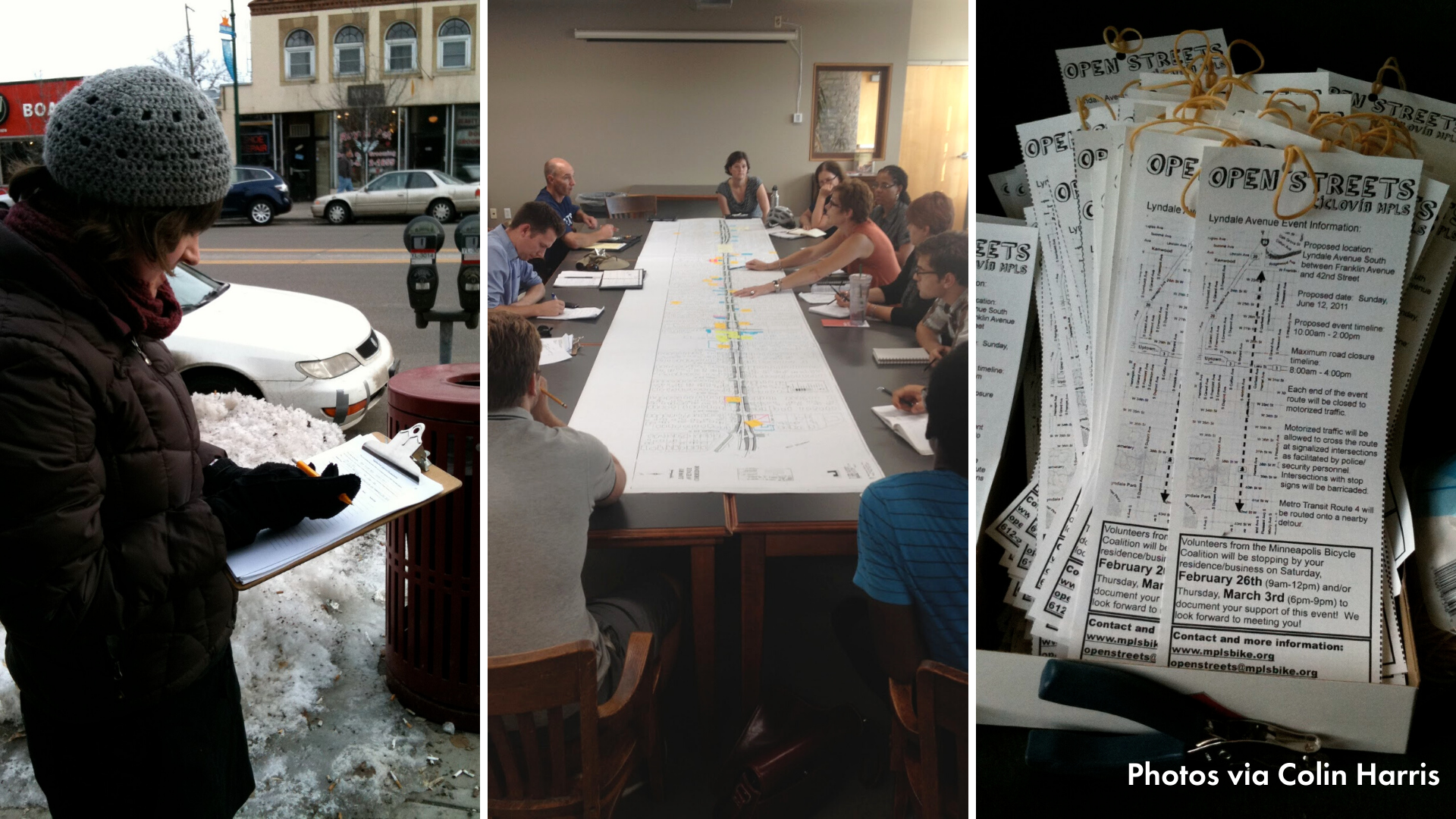 We quickly realized that an effort to meet our goals (host an event on a major street over two miles in length), much more time and coordination would be required. We originally organized around a Lake Street Ciclovía; however, due to public safety concerns related to detour routes, we shifted our efforts to Lyndale Avenue South.

Through engagement with six neighborhoods, numerous businesses, and multiple City Council representatives, we completed a commercial block permit application (which included gathering signatures from adjacent property owners) to have the first-ever Open Streets Minneapolis event on Lyndale Avenue from 22nd Street to 42nd Street on June 12, 2011.

5,000 people enjoyed Lyndale Avenue South in a completely new way for four hours on that day in 2011—and people did not want to leave. Initial resistance from the City slowly started to turn into acceptance and excitement in subsequent years. We expanded to include Lowry Avenue North in 2012, and steadily grew the initiative to four routes in 2013, six in 2014, and eight in 2015.

What were the biggest challenges you faced in this work? Do you think the challenges in our movement have changed over time?

As we celebrate ten years of the Minneapolis Bicycle Coalition / Our Streets Minneapolis, so much has changed—yet there is so much to do. We have a growing network of separated and comfortable places to walk and bike throughout the city; however, people walking and biking are still at significant risk for severe injury or death on our streets.

A challenge ten years ago was to create a car-free Lyndale Avenue for four hours; today, the City of Minneapolis embraces and celebrates Open Streets Minneapolis. Now, in 2020, the challenge is to design our streets to be truly be places for people throughout the year—not just for a few days throughout the year. And in the current climate emergency and with the City’s commitment to Vision Zero, I am optimistic that enhancements for walking and biking will be implemented throughout the city at a more rapid pace, and people of all ages and abilities will consistently be able to safely and comfortably enjoy this beautiful city.