Last week, we had the honor of delivering over 500 hand-written letters to Minneapolis Councilmember Lisa Goodman, Mayor RT Rybak and County Commissioner Peter McLaughlin.  All of the letters – written by downtown Minneapolis residents, workers and visitors – request that the City and Hennepin County install protected bicycle lanes on Washington Ave S as part of the upcoming reconstruction project. 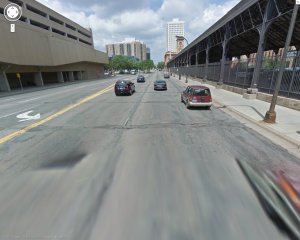 Washington Avenue today has seven lanes of traffic. Despite the difficult conditions, hundreds of people bicycle on Washington Avenue S, in numbers equal to those on the much more comfortable S 2nd Street one block north.

About a dozen dedicated volunteers from the Minneapolis Bicycle Coalition gathered the letters from pedestrians and cyclists traveling within two blocks of downtown’s Washington Ave S. The support from people passing by was overwhelming. After seeing a photo of Washington Ave S today and a rough idea of what it could look like with protected bike lanes, hundreds of people put down their groceries, pulled over in the middle of a bicycle ride, handed their baby to a friend or otherwise stopped what they were doing to write a letter. 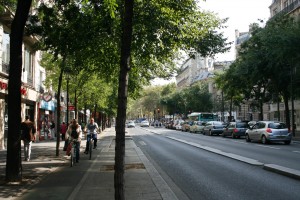 Washington Avenue could look more like this Boulevard with curb-separated bike lanes (cycletracks) in Paris.

The letters tell the personal stories of why protected bike lanes would make a big impact on downtown. They demonstrate the diversity of the people who want to see protected bicycle lanes on Washington Avenue S become reality.

Along with the letter-writing campaign, the Minneapolis Bicycle Coalition has been doing outreach to downtown stakeholders, businesses and decision-makers. These groups, like those who wrote letters, generally support and are excited about protected bike lanes on Washington Ave S. Some, however, ask “Why, Washington? Why can’t people just bike on 2nd Street, or 3rd and 4th Street?”

Why would anyone want to bike on Washington?

Most people who bicycle downtown know why you end up on Washington Ave S so frequently, even with the hostile and unsafe conditions there today – it’s the only street that really connects, from the North Loop through downtown and across Seven Corners to the University.  According to the City of Minneapolis bike counts, people bicycle in nearly equal numbers on S 2nd Street, one of the nicest streets to bike on in Minneapolis, and Washington Ave S, one of the least friendly. This demonstrates the demand for bicycling in this corridor.

Washington Avenue is full of destinations – large office buildings, small businesses like Big Brain Comics and Core Power Yoga, restaurants and, increasingly, residences.  A protected bike lane on Washington Ave S would have a number of benefits to these users, helping provide a safe link from downtown to destinations to the West and East. Even planned improvements to S 2nd Street (a tunnel to the East and eventual removal of stairs on private property to the West) will not remove the demand for bicycling on Washington Avenue S.

Consider a visitor staying at the A-Loft hotel and using the Nice Ride bikes right in front of her hotel.  She wants to bike to Town Hall Brewery at Seven Corners, which also has a Nice Ride kiosk. Using Washington Avenue, she has to make one turn, and her trip is less than half a mile long.  Using S 2nd Street and the new tunnel planned along the river, her trip would be more than twice as long, and will require 9 turns.  (Left on 9th Ave, right on 2nd street, left on 13th Ave, right onto tunnel trail, right on trail/driveway at bridge 9 entrance, right on 1st St S, Left on 19th Ave S frontage road, left onto 19th, right on Washington.)  What are her chances of not getting lost?  The same basic comparison holds true for someone staying at the Holiday Inn Metrodome (or residing in a dorm or apartment near Seven Corners) and biking to Grumpys, or Spill the Wine, or Sawatdee, or the Guthrie, or pretty much anywhere downtown.

A protected bicycle lane on Washington Avenue S would benefit all of these businesses, bringing students from the University of Minnesota and other visitors into downtown. Nearly 7,000 people bicycle across the SE Washington Avenue Bridge between the West Bank and the East Bank every day. This shows not only the tremendous potential for reducing automobile trips into downtown by providing safe and accessible bicycling and walking facilities, but also the potential customer base for downtown businesses if those people continued their trips into downtown.

Furthermore, a protected bicycle lane would benefit pedestrians, particularly in the soon-to-be-reconstructed stretch from Hennepin Avenue to 5th Avenue S. In this segment, pedestrians have to walk along a relatively narrow sidewalk with no buffer, close to seven lanes of fast-moving traffic. Large office buildings with blank walls lend a feeling of isolation to the few pedestrians who walk along this stretch today.

A protected bike lane, especially if built with a raised curb, would create an active buffer for people walking along the street, not only separating people from moving cars, but bringing life to the corridor.  A wider sidewalk would have many benefits, but with no activity-generating uses, there is the danger of creating totally unused dead space in the heart of downtown. 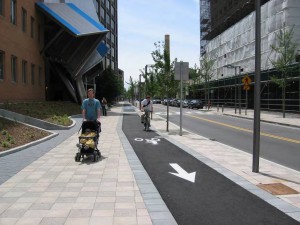 A curb-separated bike lane (cycletrack) on Vassar Street in Cambridge, MA. Protected bike lanes are gaining popularity in the US because they have resulted in huge increases in bicycling in European cities. (Photo by City of Cambridge)

The rough vision for Washington Avenue S that the Minneapolis Bicycle Coalition has circulated shows a reduction from seven lanes of traffic to five lanes.  The resulting cross section would have two travel lanes in each direction with a center turn lane, leaving plenty of space for a wider sidewalk, trees and protected bike lanes.  But this is just one of the ways that bicycle facilities could be added to Washington Avenue S.  In fact, bicycle lanes could be added to this stretch and to the East today by simply reducing the width of the 13 foot travel lanes to a more reasonable 11 feet. 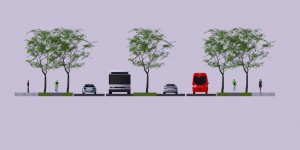 A five-lane Washington Avenue could include a sidewalk, two rows of trees, a curb-separated bicycle lane and a median/turn lane.

As Hennepin County continues with its planning process for this reconstruction, we hope there will be a robust conversation about the pros and cons of different street configurations.  However, given the goals of doubling downtown’s population, the increasing demand for walkability and bikeability in people’s location choices, one needs to ask:

Is a seven lane stretch of road in the heart of downtown Minneapolis compatible with city and county goals for increasing walking and bicycling and promoting a livable, vibrant downtown?

In Their Own Words

Here are some excerpts from the over 500 letters we collected from supporters of adding protected bike lanes to Washington Avenue S:

“Washington Avenue is a key route used by bicyclists to get to the University. . . . As more people use bicycles instead of cars for short distances, the overall health of the city improves.” – Janice, 55403.

“A protected bike lane would help keep bikers like myself safe and help Minneapolis stay in the top spot as #1 bike city.” – Blake, 55410.

“I am . . . FREQUENTLY asked to take people to establishments on Washington Avenue and it is very nerve-wracking w/o a bike lane!” – Pedicab driver.

“This is a major thoroughfare used by both cars AND bikes. It’s a gateway to downtown MPLS, the University, & other areas. I think a bike lane would be a boon to increasing business to the area.” – Melissa, 55404.

“I live downtown & bike with my kids and even grandkids.” – Illegible signature, 55404.

“I use my bike to train to support the NATO mission in Afghanistan. Keep me and my fellow bikers safe.” Lieutenant, USMC, 55414.

“I live in downtown Minneapolis. I run downtown everyday and would appreciate the space and safe environment for walking.” – Erin, 55414.

“As a biker and car driver, I understand and appreciate the convenience of making all the lanes separate.” – Meghan, Minnetonka.

“I . . . need to use Washington Ave frequently to get from one side to the other. I do not have a car and bike all the time to get to & from work / everywhere. Please put in safe bike lanes. It will make my parents worry less.” – Caroline, 55414.

“I’m a lifelong resident of Minneapolis and I vote, and I’m in favor of protected bike lanes on Washington Ave.” – Jack, 55407.

“I have season tickets to the Guthrie and work at Orchestra Hall. The livability of downtown is extremely important to me. A bike lane/cycle track would have a calming effect on a wonderful downtown neighborhood and destination.” – Julie, Richfield.