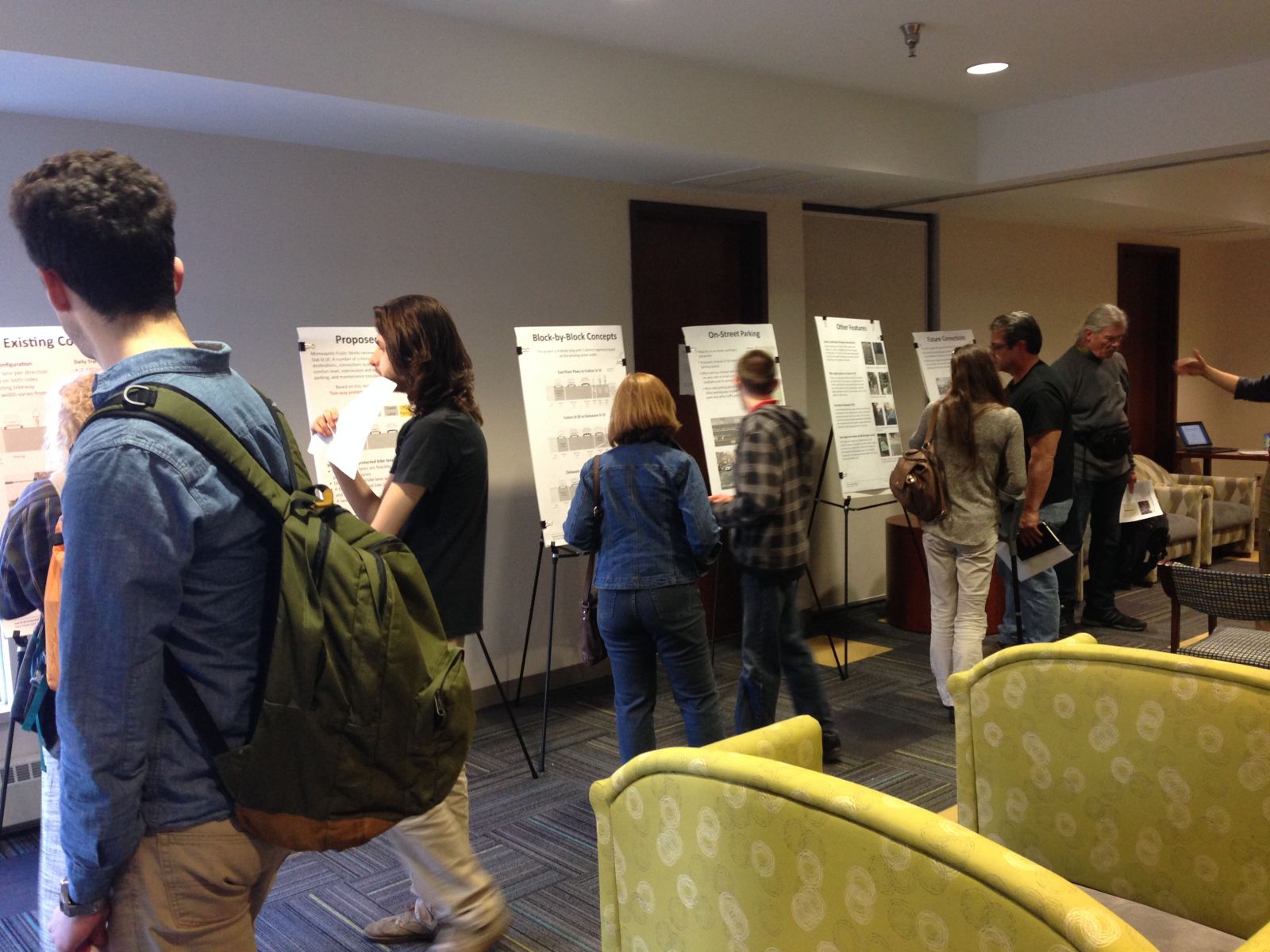 You certainly forget how many people bike when you’re the sole cyclist on the road and the lanes and bike racks are empty during the quiet and long winter months. However, in light of the beautiful warm weather, student bikers have been flocking to the streets in the thousands, clogging the bike lanes, filling up the bike racks, and mixing with car and pedestrian traffic.

Despite this amazing and crowded student return to spring biking, the April 13 Oak St SE Protected Bikeway Open House at Argyle House lacked that student presence, reduced to just four University of Minnesota students to decide the fate of bikeways on our campus.

The rest of the audience consisted mostly of business owners and apartment caretakers in the Stadium Village area, as well as some city officials, concerned non-student citizens, and representatives from different biking groups around Minneapolis.

Upon arrival, community members could take a look at the entire proposal for the street, bikeways, bus stops, parking spots, and all. When the presentation started, Simon Blenski, the bicycle planner for the city of Minneapolis, took the stand to go through the information. The planned start date for the bikeway is the vague date of Summer 2015, hopefully to be finished in a matter of weeks. The basis of this design comes from a few places - the 2011 Minneapolis Bicycle Master Plan, listing this bike lane as one of the many to be done in a certain amount of time, and the 2013 Climate Action Plan, outlining initiatives to reduce waste and harmful greenhouse gas emissions, which included adding thirty miles of protected bikeways to encourage people to bike to and through the city. 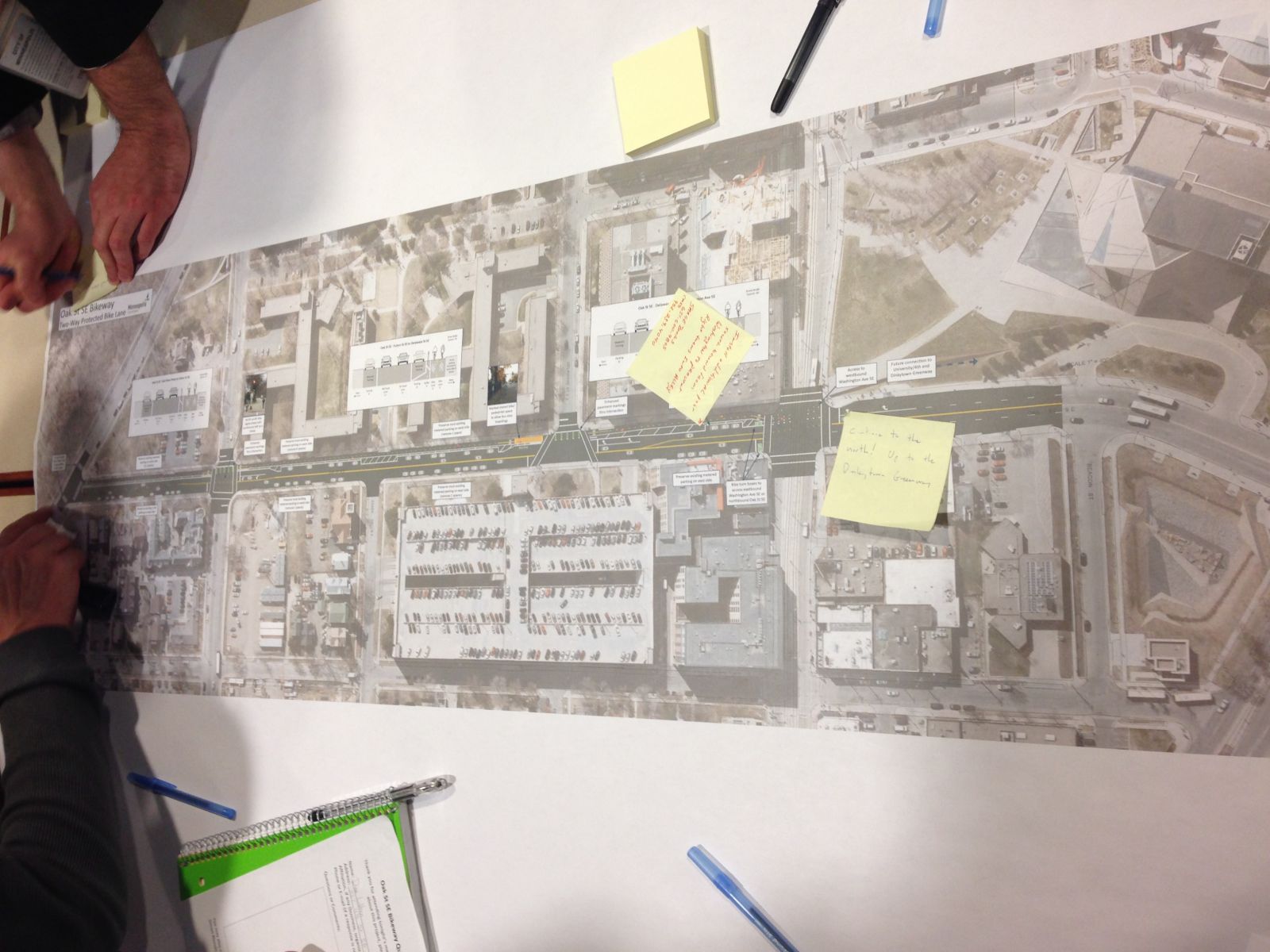 The proposal consists of a two-way protected bikeway on the west side of the street. The protection in question is a painted buffer, delineator posts, and in some areas, on-street parking. As many of the business concerns for adding the lane involved parking spaces, the proposal addresses this as well, taking away metered parking on the west side of the street in certain areas, but perhaps adding some spots in a different location if the demand is high enough. Some other features discussed were green markings for the lanes, especially through intersections when the protection pauses, a bike signal for the left turn on Fulton, and perhaps two-stage turn boxes at Washington. One highly contested issue is that of the Southwest Transit bus stop on Delaware, causing an interruption in the bikeway for a bus that comes once a day. Because of that, in this area, there will be a shared bike and pedestrian space, leaving our fate up to random order.

The Oak St SE protected bikeway still seeks approval, and the design needs to be finalized, but overall this is a positive change for the university community and an example of how generally conflict-free the addition of a bikeway can be. 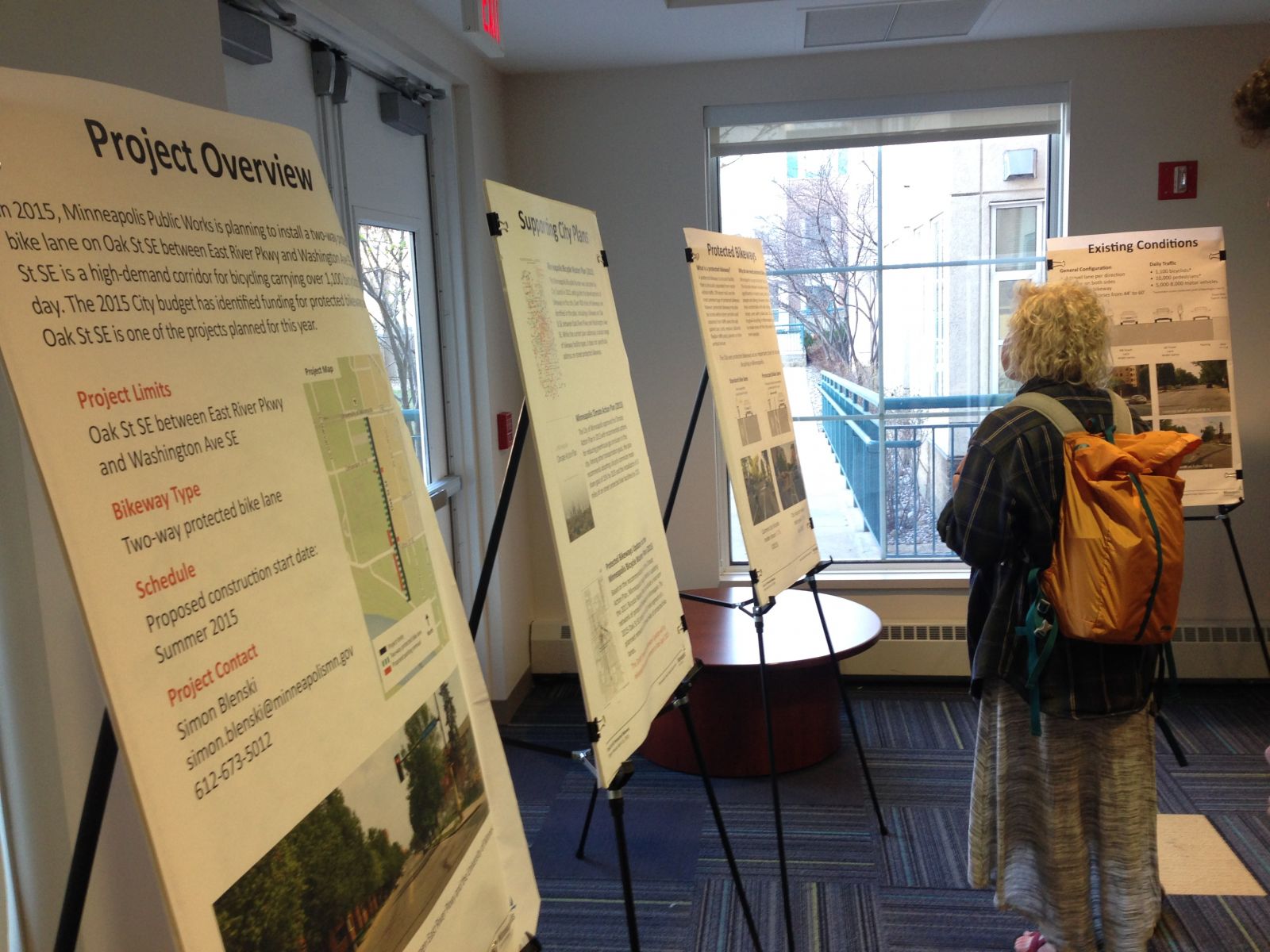 Some issues brought up by citizens in attendance were apossible connection to East River Road, such as markings and/or a crosswalk, snow and ice clearing in the bikeways and the possible necessity of specialized equipment for that, and how to continue this bike lane up north past Washington. In response to that last question, city planners expressed hope that this project could continue but were unsure about when that would happen and where the funds could be found. Certainly, support from the community plays a major role in what projects are prioritized.

Our Voices Have Influence

The importance of community voices is one reason why student involvement, especially in the areas surrounding campus, is imperative to progress moving forward in bike lanes. As a student myself, I think that more students need to realize that we have a major stake in our campus biking community and that, if enough of us speak up, our opinions will be heard and impact these decisions being made on our behalf and at our expense.

The new Oak St SE bikeway is a huge step for the city’s Bicycle Master Plan, but timely progress depends on those who work for the entire community, and I believe that all citizens have a lot more power than they realize in these constantly evolving plans.