Our verdict on the Transportation Action Plan

Let’s take a look at the final version of TAP, and see how well our priorities are represented in it. 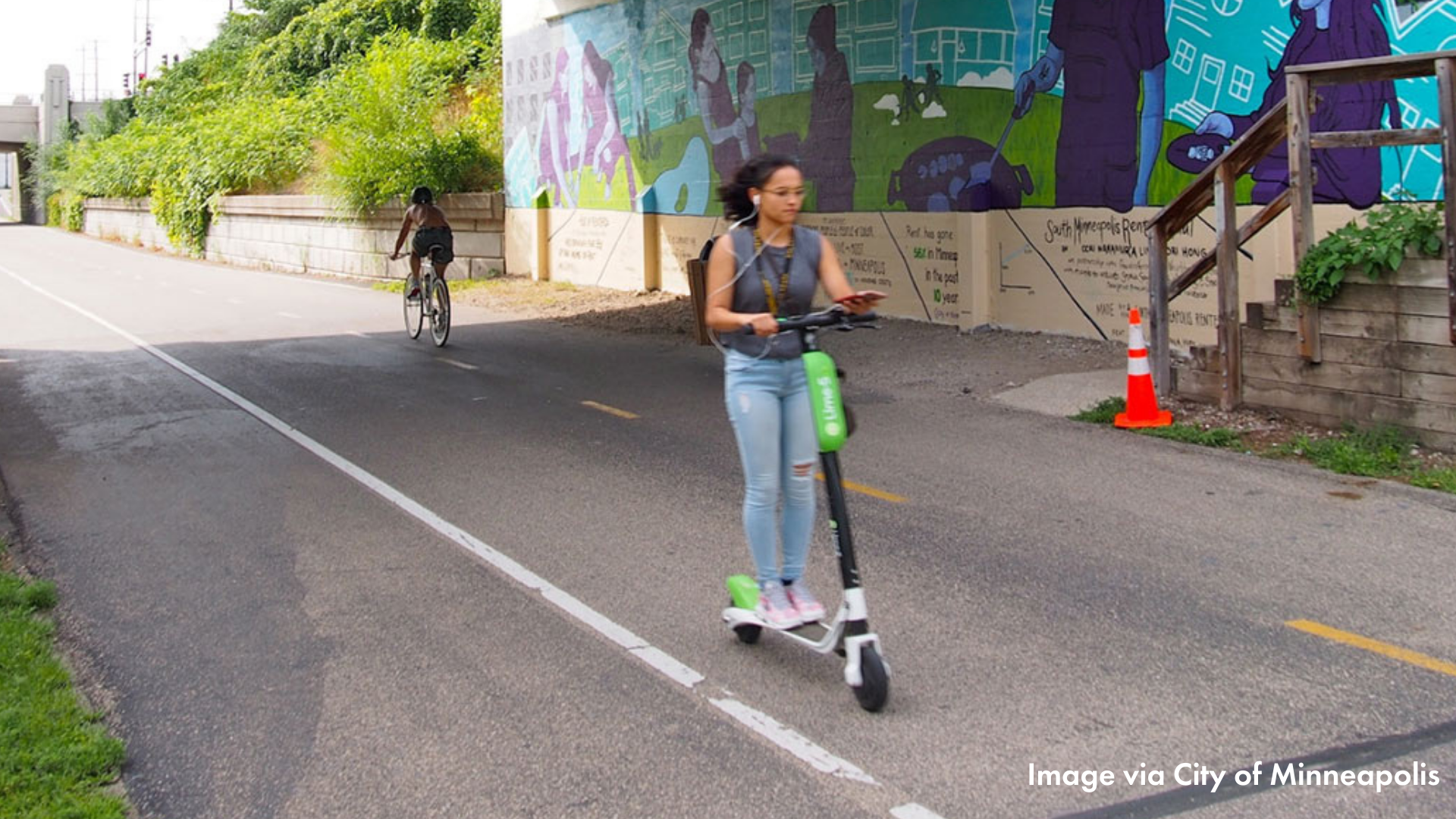 1. Make sure the plan results in real projects on the ground.

We were concerned that while the TAP itself would have good overall goals, real change on the ground would not happen unless there were clear processes laid out for the goals of the plan to be implemented.

In our opinion, the TAP does lay out clear action steps that the City will take to achieve the plan’s goal. These actions, if completed, will lead to comprehensive changes in how street projects are chosen, planned, designed and implemented. It also explains in detail how these actions will work alongside other City initiatives like the Vision Zero Action Plan, the 20 Year Streets Funding Plan, and the Americans with Disabilities Act (ADA) Transition Plan.

The City of Minneapolis is also working to release a new street design guide that will be released in early 2021. This document will guide transportation planners and engineers as they make decisions about the details of street projects--including what street cross-sections will look like.

We are also heartened to see a robust section in the TAP around evaluation. The City will track progress in five goal areas--mode shift, safety, vehicle miles traveled (VMT) reduction, greenhouse gas (GHG) reduction, and equity. City staff will also provide a progress report on the plan’s implementation through the annual Your City Your Streets progress report, in addition to a more formal report every two years.

However, it is important to note that this plan is not fiscally constrained. This means that there is no money allocated by the City right now to make sure that the recommendations of the plan are adopted.

One good way to evaluate how the actions in the plan will be implemented is to pay attention to upcoming City-led street reconstruction projects like Hennepin Ave S. This is a major project that will be a critical test of whether the City will seriously implement the recommendations of the plan. Our Streets Minneapolis staff and volunteers will be watching this project closely.

Our verdict: We are cautiously optimistic. We think the plan does a good job of explaining how it will result in real projects on the ground. We also applaud the comprehensive evaluation framework laid out. However, we are concerned that there is  a lack of clearly designated funding and timelines for implementation that may make it harder to challenge our current car-centric system. 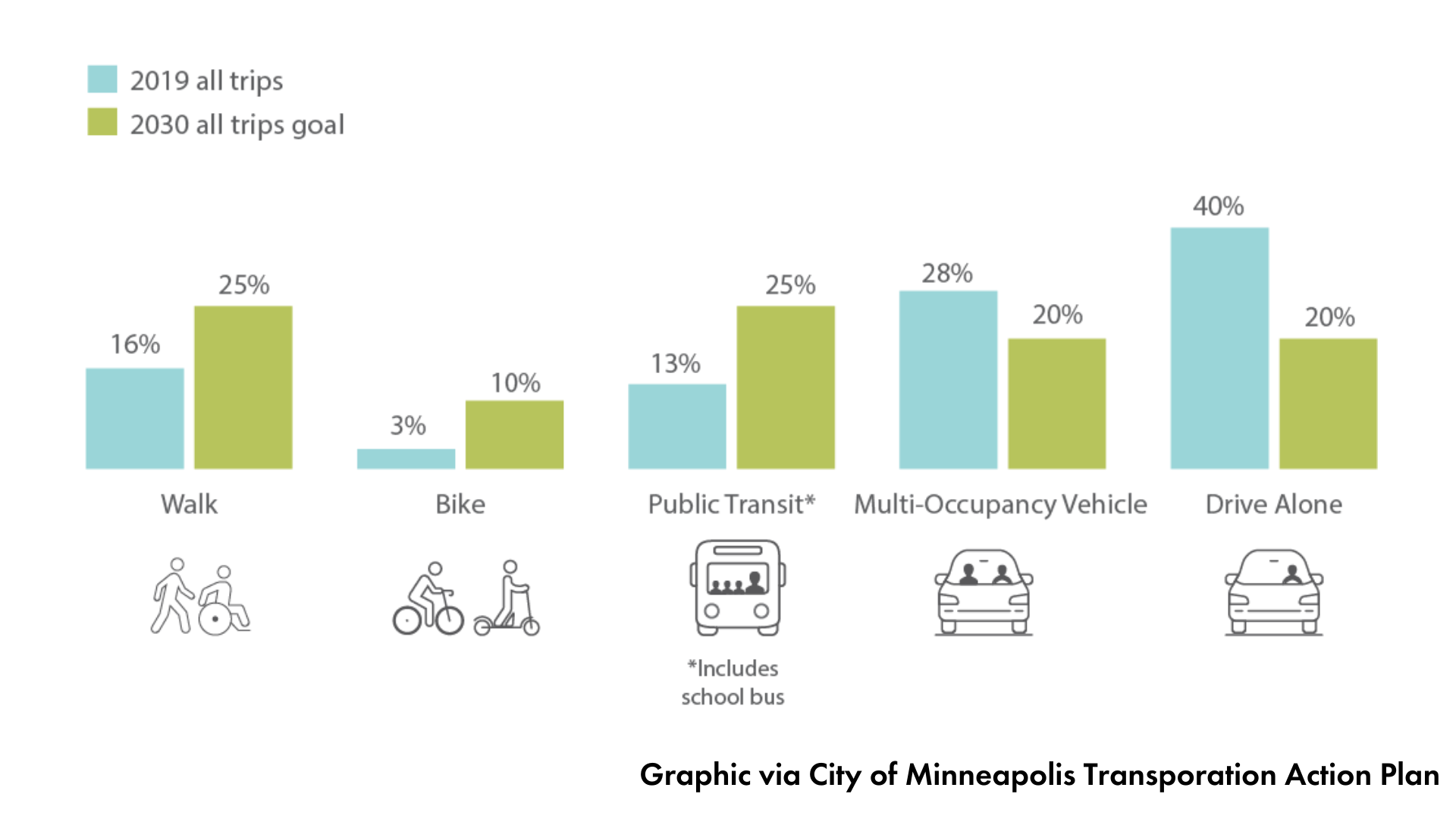 Decades of institutional racism in transportation decision-making has resulted in continuing racial disparities in transportation outcomes. For example: Native and Black community members are at a higher risk of being hit by a car, breathe worse air, and are less likely to have access to good active transportation infrastructure. For these reasons, we had asked for the Transportation Action Plan to prioritize racial equity in its recommendations.

The TAP, in its final version now explicitly mentions these racial inequalities, in addition to acknowledging the role that freeway construction played in destroying BIPOC (Black, Indigenous, People of Color) neighborhoods. We applaud the acknowledgement of these disparities in the plan.

We are also excited to see that the City will work to build trust among historically marginalized groups through an enhanced engagement process. This approach is one that Our Streets Minneapolis has long been advocating for--to make sure that the voices of those who have been left out in transportation are prioritized going forward.

An area of concern is that the plan currently lacks an intentional racial equity framework that will help prioritize the implementation of the various strategies and actions within it. We are heartened to see that the final plan includes a call for the creation of such a  framework. We urge city staff to prioritize the creation of this framework and work quickly to incorporate it into the selection, planning and implementation of transportation projects.

Our verdict: We think the plan does a good job of identifying existing racial disparities in transportation, but lacks clear next steps on how they will be mitigated. We look forward to the creation of a racial equity framework to help guide the implementation of the plan.

Because of uncleared snow and ice on our sidewalks, Minneapolis can become impassable for many residents during winter--especially for those with disabilities. We asked that the City prioritize clearing snow and ice from a network of streets where pedestrian improvements will be focused called the Pedestrian Priority Network (PPN).

While the early versions of this plan did not include City-led sidewalk clearance, organizing by Our Streets Minneapolis resulted in an amendment to the final draft of the plan. This amendment, proposed by Council Member Cam Gordon, commits the City to evaluating City-led removal of snow and ice from the PPN. This victory was a result of many of you telling your elected officials how important it is to have walkable winters.

We also commend the series of actions that the plan takes to improve walking in general. These include working to remove the need for pedestrian actuated “beg buttons,” installing crosswalks at unsignalized intersections, and including pedestrian street lighting on all street reconstruction projects.

We are concerned that the plan calls for increasing financial penalties for individuals who aren’t able to clear their sidewalks in the winter. Assistance programs aimed at helping people who can’t clear their sidewalks are inadequate and often fill up long before winter begins. We worry that increased financial penalties will disproportionately affect people with disabilities and people of color.

Our verdict: We think the plan takes some good steps to make Minneapolis more walkable, but does not go far enough to truly make sure people will have a good walking experience year-round. We are concerned that proposed increases in financial penalties for those who do not quickly clear their sidewalks will worsen existing inequalities. 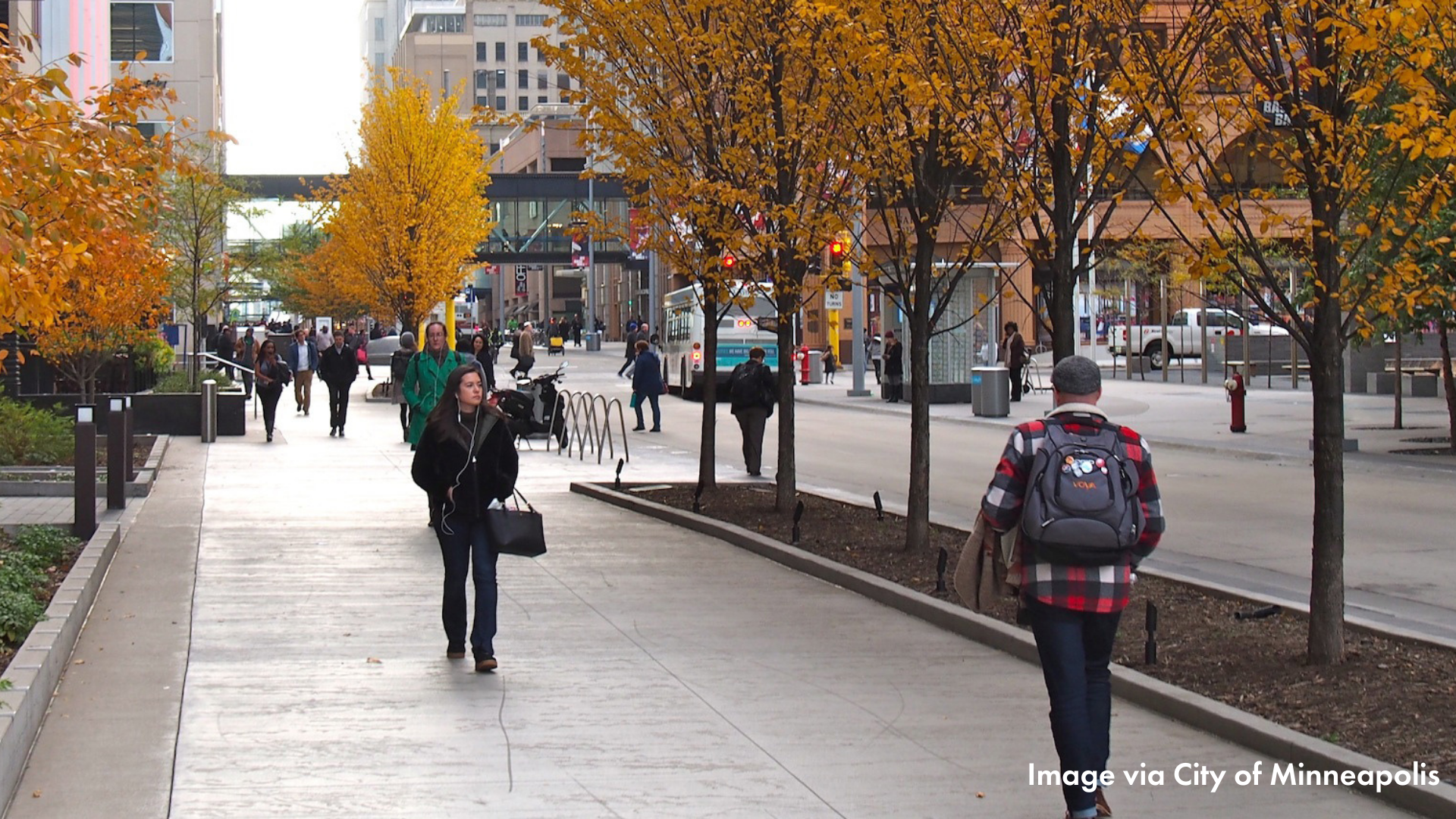 4. A complete bike network that is accessible to everyone

The plan calls for the completion of an All Ages and Abilities Network. This is a citywide network of streets that includes infrastructure to allow people to easily and comfortably bike on them. The plan establishes a goal of building 141 miles of new or upgraded bikeways by 2030. If implemented, this will transform our street network, and help make biking a primary means of transportation for many more people.

The plan includes specific design steps to prevent blocked lanes and conflicts with loading or parked vehicles. It also includes steps to create safer intersections, where a majority of bike crashes happen. The biking section of the plan also has a regional vision and seeks to implement connections to neighboring communities.

Our verdict: We think the plan does a really good job of establishing a vision and actions steps for creating a network of protected bike infrastructure throughout the city.

5. Restore balance in how we divide up our streets

Today, the majority of our streets are used for the movement and storage of cars. We asked that the TAP include a plan to restore balance in how we divide up our streets so that biking, walking, rolling and transit receive their fair share of space.

The TAP explicitly states “this plan does not eliminate places for people to drive, it simply rebalances space to incentivize and allow for low carbon transportation options.” It also incorporates a goal of moving trips away from cars, and into those made biking,walking, rolling, and public transit. A key reason for establishing this goal according to the plan is to “allocate space across all modes equitably.”

The plan also calls for the creation of a “plaza program” that will seek to convert street space for use by pedestrians and green infrastructure. It also calls for evaluating a network of car-free streets. If implemented, these changes will be important steps towards building a street network that puts people first.

The City is also working on updating its Complete Streets Policy that institutionalizes a hierarchy of how we prioritize people using different transportation modes. The current version of the Complete Streets Policy establishes that we prioritize people walking and rolling, followed by those biking, in transit and then in cars. Our Streets Minneapolis staff are involved in the development of the updated version of this policy.

Our Verdict: We think the plan lays out a bold vision to restore balance in how we divide up our streets. 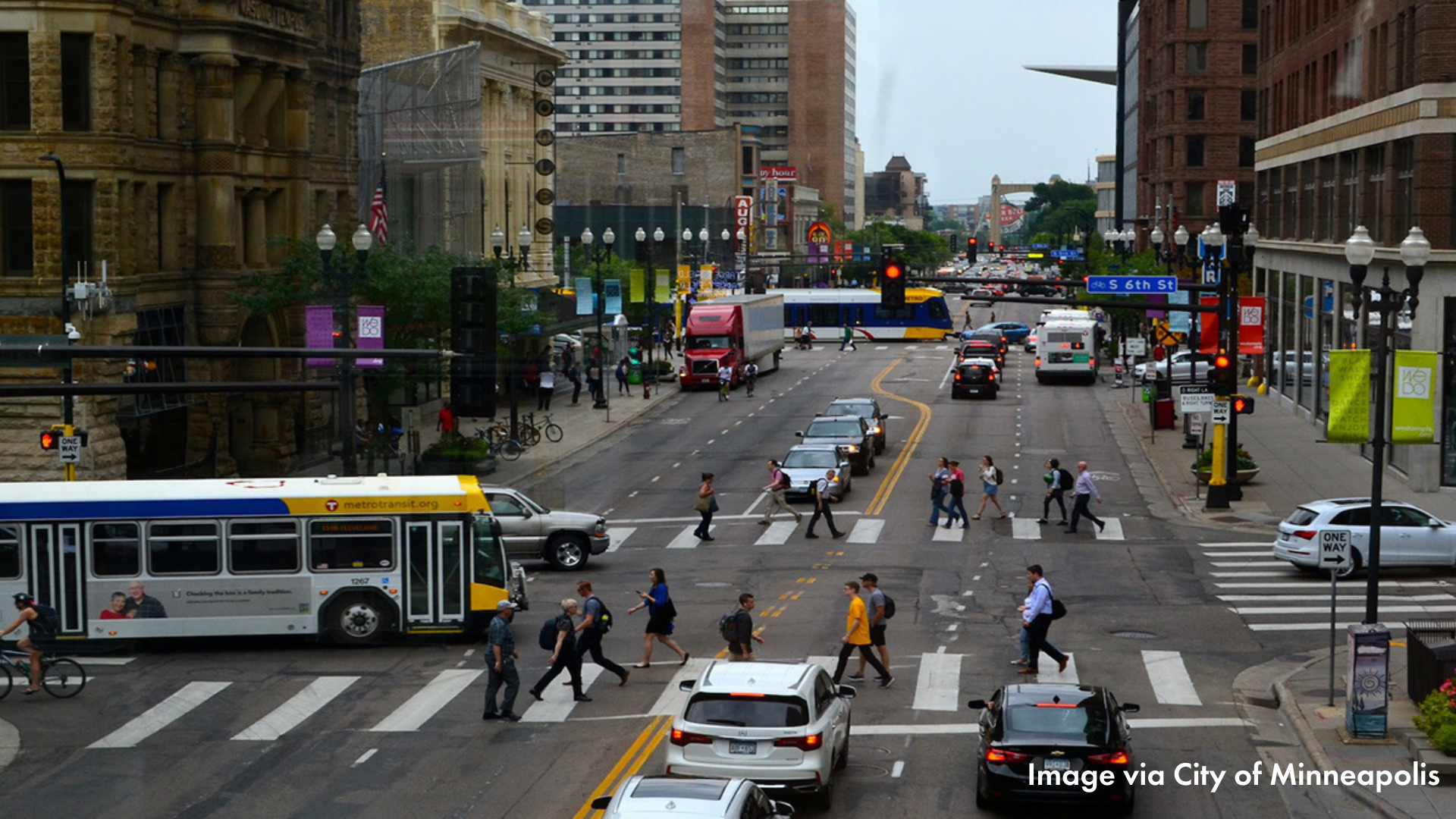 We asked that the TAP lay out a plan to slow cars citywide, in addition to moving away from outdated car-centric metrics like Level of Service (LOS) that prioritize reducing car traffic delay.

LOS measures how much car traffic was delayed on our streets. To improve LOS, engineers prioritize minimizing traffic delay in street projects. This would often mean adding traffic lanes and timing traffic signals so cars wouldn’t have to wait as long at stoplights. This measure did not take into account how long people walking would have to wait to cross a street, or whether biking was easy and comfortable. Focusing just on LOS often made biking, walking and rolling more difficult. We therefore asked for LOS be de-prioritized in the design and evaluation of street projects. The TAP commits to moving away from LOS as a primary indicator of success on street projects. We think this is an important step in the right direction, and commend the City for including this action in the TAP.

Recently, the City of Minneapolis established new lower citywide speed limits that we think are an important first step towards a more comprehensive effort to reducing speeds on our streets. The TAP also prioritizes completing the actions in the Vision Zero Action Plan. This plan has an explicit focus on reducing speeds. Reconfiguring our street designs to include more biking, walking, and rolling infrastructure will reduce car traffic speeds overall.

One area of concern is that nearly half of the most dangerous streets within city borders are outside the control of the City of Minneapolis. Many are owned by other agencies like Hennepin County and the Minnesota Department of Transportation (MnDOT). While the plan commits to more coordination with these agencies, we believe that the City of Minneapolis must do more to hold other entities to the same high standards laid out in the TAP.

Our verdict: We think the actions and strategies laid out in the plan will reduce traffic speeds, and work towards putting people first.

Overall, we think this is a visionary plan that will help Minneapolis achieve its climate and equity goals. There are specific strategies that respond directly to the priorities that Our Streets Minneapolis asked for while the plan was created

Implementing this plan will require bold leadership from Minneapolis Public Works and our elected officials. While the plan does not have funds attached for its implementation right away, we ask that low cost actions that can be carried out quickly be prioritized in the next two years.

Our Streets Minneapolis will continue to closely monitor the implementation of the Transportation Action Plan.