On Wednesday, July 18 at 6pm at Hope Community (at Franklin and Portland), Bike Walk Twin Cities is hosting a public meeting to discuss detailed options for improvements to Franklin Avenue. This is a follow up to a community visioning session on May 7.

The discussion will focus around a Draft Feasibility Report "Franklin Avenue: Moving Towards a Complete Street" done by consultants Toole Design Group and CH2MHill.

Here is a quick summary of the report...

Franklin is certainly not a friendly road for bicycling (the study calls it "uncomfortable") and it has general safety problems for everyone. According to the study, it's overall crash rate is more than 2.5 times the "expected" crash rate for a road like Franklin. The pedestrian and bicycle crash rate exceeds the South Minneapolis average at most intersections (and by a lot at several). West of Minnehaha Avenue, there are no bike lanes, there are stretches that are appalling for people walking, and there are also afternoon traffic challenges, especially between 4th Avenue and Park Avenue. 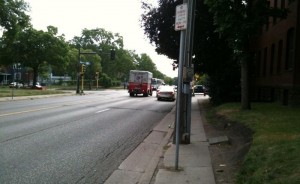 Franklin Avenue: A challenging street, especially for walking and biking

The study examines several options for what the consultants have called a challenging street because of the relatively narrow area to work with, safety challenges, and demand for driving, biking, and walking. Their recommendation is:

In picture form, the recommendation is: 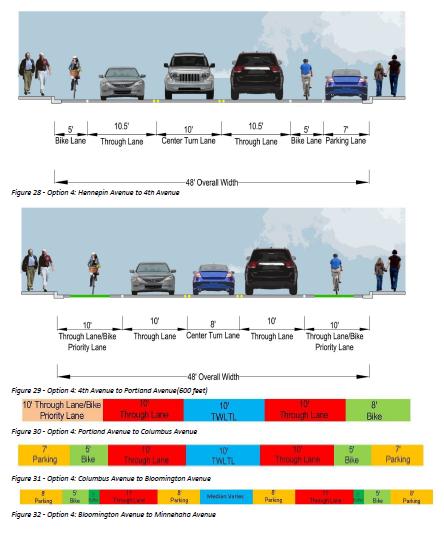 Recommendation for various parts of Franklin Avenue in consultants study

The consultant recommendation includes a bike lane except between 4th Avenue (near Electric Fetus) and Columbus Avenue (between Park and Chicago Avenues). In that 5-block section they are suggesting adding a center two-way left-turn lane with narrowed existing lanes. Bicyclists would be encouraged to ride down the middle of the outside lane.

The proposal would add full-time on-street parking on one side west of 4th Avenue (it is currently only available outside of rush hour). The addition of turn lanes throughout are intended to aid auto traffic flow and improve auto safety.

Throughout the proposal, the consultant is suggesting narrower lanes than the County is typically comfortable using. The County has used 10-foot lanes on a stretch of Cedar Ave S, and narrower than that on a short stretch of Broadway Ave NE, but have to date not been open to lanes narrow than 11 feet to allow for the addition of bicycle improvements. Given the limited space, demands, and safety challenges in this corridor, it will be interesting to see if the County is willing to try some or all of these recommendations.

What's your take on the recommendations?