81 percent of crashes between bicyclists and motorists occur at or within 50 feet of an intersection, according to data collected by the City of Minneapolis between 2000-2010 and published in a report titled, “Understanding Bicyclists-Motorist Crashes in Minneapolis, Minnesota.”

The draft of the new Hennepin County 2040 Bicycle Transportation Plan calls for reducing by half the number of bicycle crashes per capita from 2010 levels so its only natural to look at how intersections could be improved. In a recent APBP webinar, “Optimizing Signals for Bicyclists & Pedestrians” Traffic Engineer Peter Koonce offered some experience from the City of Portland where traffic fatalities have decreased six times faster than the national average at the same time that mode share for cycling has increased. 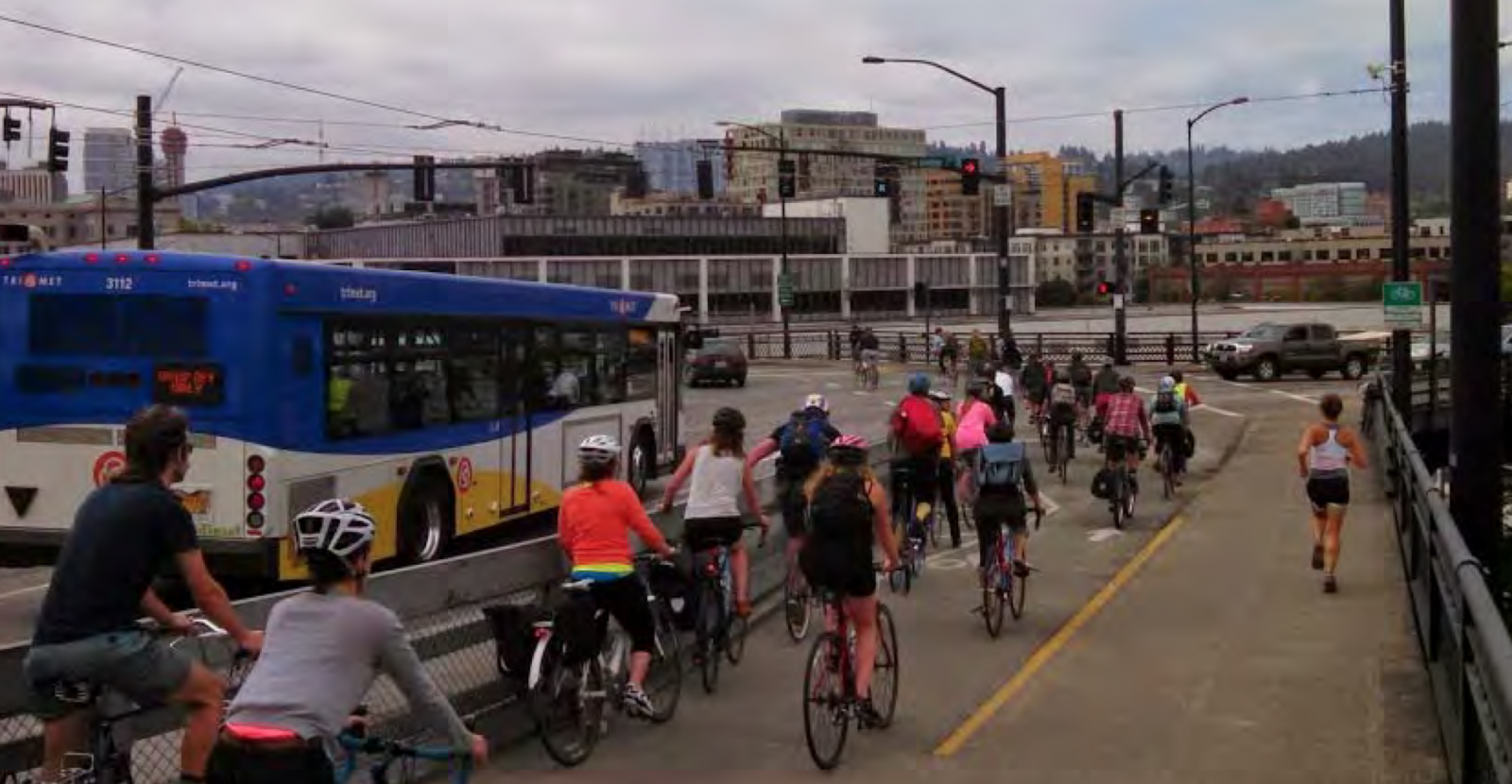 Intersections need to guide and protect cyclists and pedestrians. This photo of an intersection in Portland, Oregon is from an APBP webinar, “Optimizing Signals for Bicyclists & Pedestrians” by Peter Koonce. 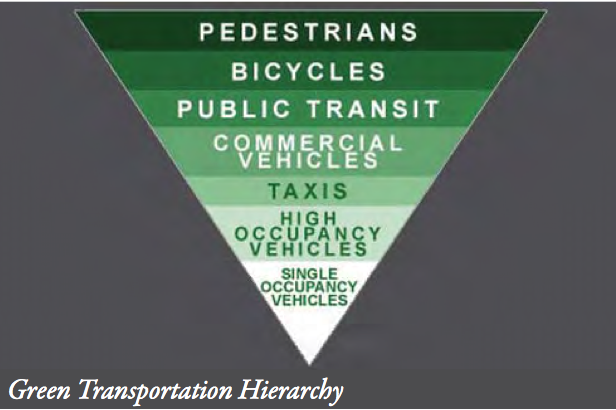 The Green Transportation Hierarchy from Portland’s Bicycle Master Plan 2030 makes it clear which modes have priority in the city.

Drive or bike 13-16 mph in downtown Portland and you can hit all the green lights. Signals are timed as short as possible to keep traffic flowing at a speed that is safe for all road users. Most adults can cycle comfortably at this speed. Pedestrians do not get stuck waiting for long stretches at major arteries. Transit can also be better accommodated. This solution has been employed in downtowns and city centers from Portland to Copenhagen.

In Minneapolis, a downtown greenwave would make cycling safer and more comfortable for commuters and support the goals outlined in the Minneapolis Climate Action Plan. A more bicycle-friendly downtown also works in compliment with revitalization efforts, like the Nicollet Mall redesign, which aim to attract more residents and visitors downtown.

In the video below, the cyclist passes through 14 intersections without stopping.

In-pavement detection loops that connect with traffic lights help cars move through intersections. Applying the same treatment in the bike lane signals bikes are an equal mode. Detection loops connect with bicycle signals to facilitate safer movement through leading bicycle intervals, which allow cyclists to move through the intersection before turning vehicles and avoid potential conflict. Loops also collect data to make better bicycle planning decisions in the future. The treatment is recommended at intersections where cyclists travel at high speeds, there is high volume of bike trips or crossing is not intuitive, according to Portland’s Bikeway Facility Design: Survey of Best Practices.

One of the most complicated intersections in Minneapolis is the five-way intersection at the East end of the Franklin Avenue Bridge, which is crossed by an average of 1,700 cyclists per day. The bridge is set to be retrofit with protected bike lanes in 2015. This could be a great opportunity to implement bicycle detection loops and bicycle traffic lights. 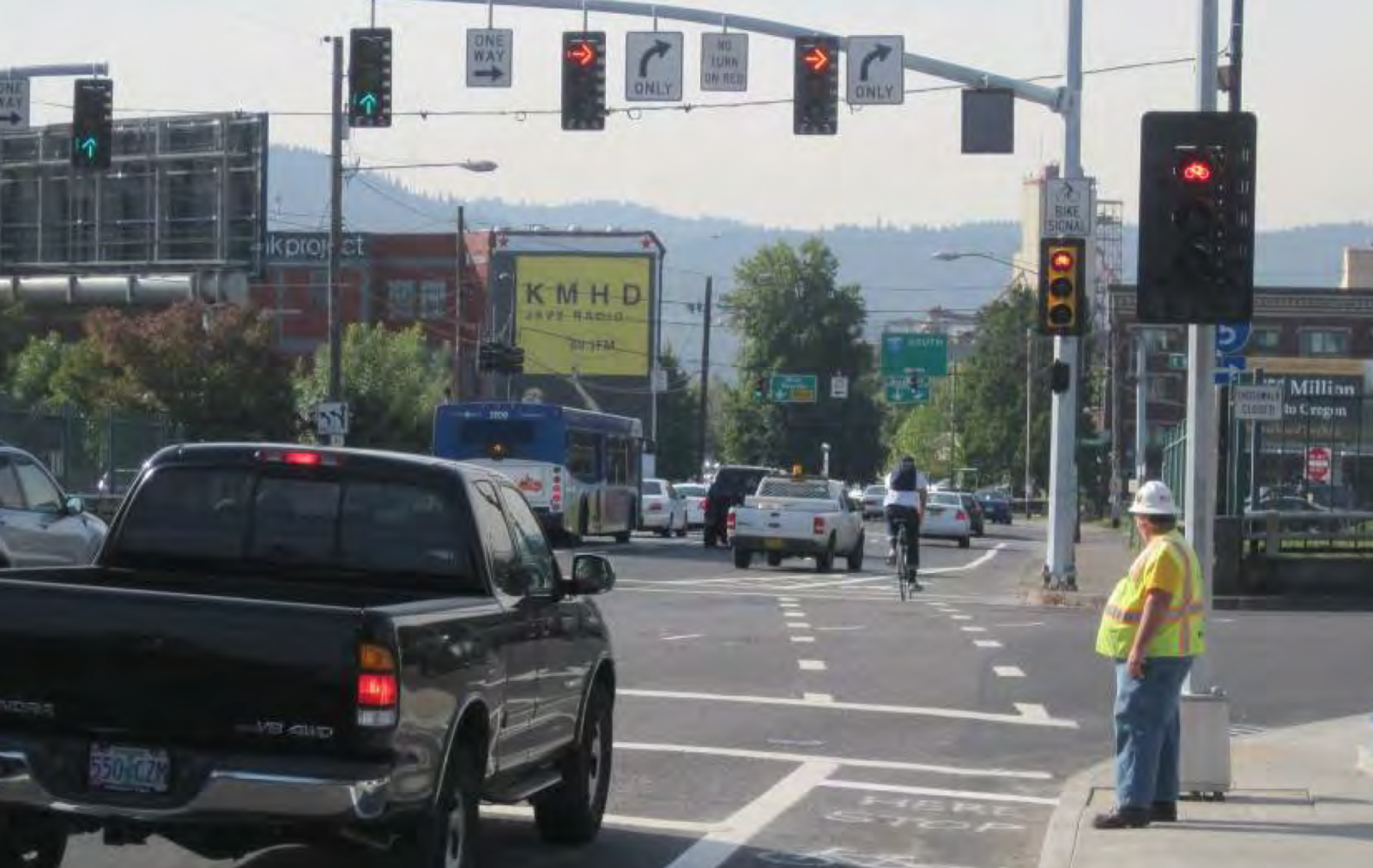 At the intersection of North Broadway and Williams in Portland, this cyclist advanced through the intersection before right-turning vehicles. Photo from APBP webinar, “Optimizing Signals for Bicyclists & Pedestrians” by Peter Koonce.

Portland is separating traffic movement with signals. For example, at the intersection of North Broadway and Williams, there are four lanes: one through lane for transit, one through lane for cars, one right-turn lane for cars and one lane for bikes. There is no turn on red and the intersection is equipped with bike signals. Detection loops and connected lights coordinate cyclist movement ahead of cars so cyclists going straight can move through before right-turning vehicles. Bike boxes can also be integrated here. 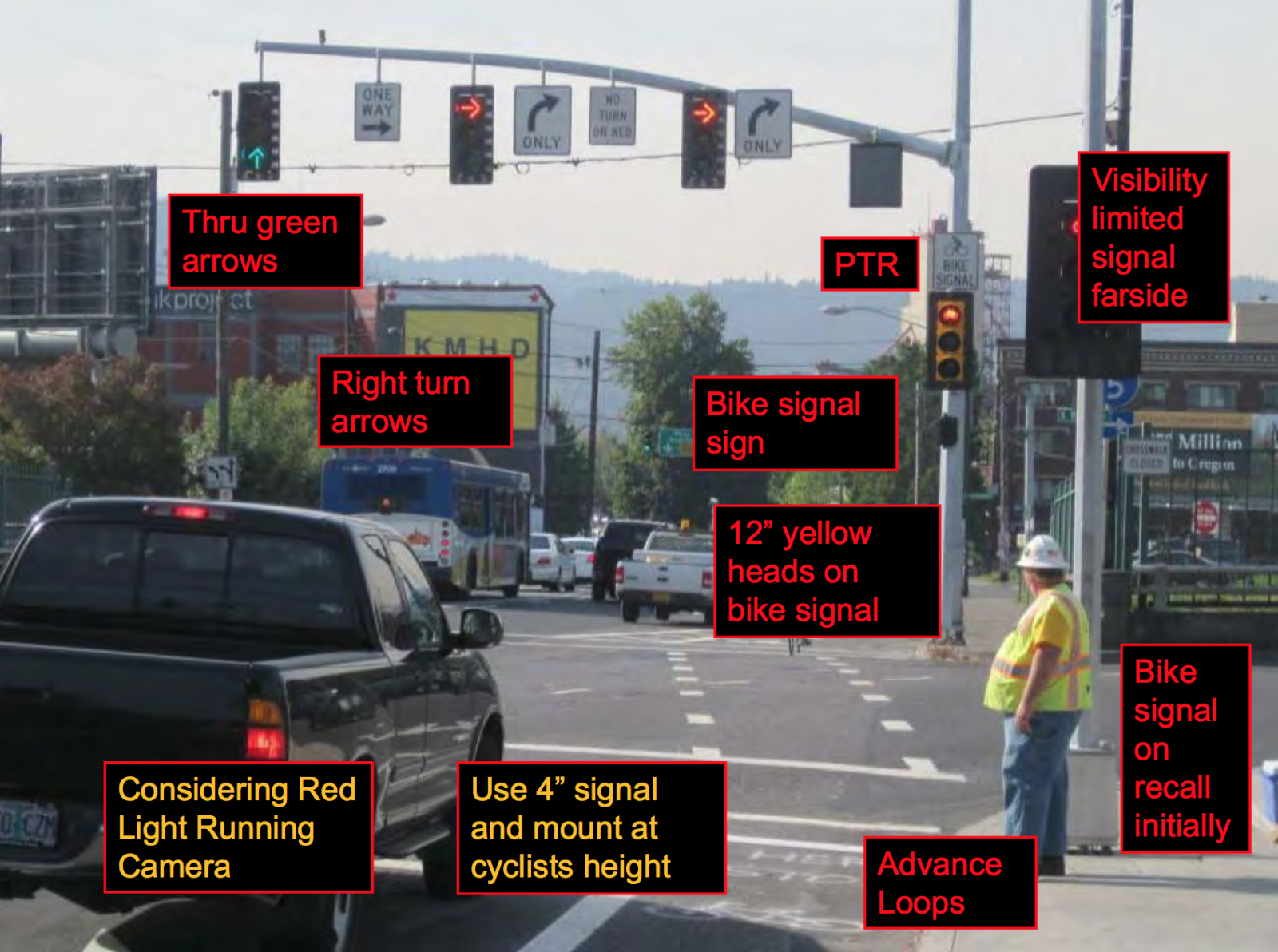 An annotated view of North Broadway and Williams intersection in Portland. Photo from APBP webinar, “Optimizing Signals for Bicyclists & Pedestrians” by Peter Koonce.

Many intersections could benefit from this treatment. One example is East Lake Street and Minnehaha Avenue where nearby bike facilities and transit attract cyclists and pedestrians to shopping. A safer intersection here could also be viewed as an equity measure as it makes shopping accessible to low-income residents. Perhaps, this treatment could be thought of as a first-generation treatment, like painted bike lanes, signals that separate streams of traffic will hopefully pave the way to more protected intersections in the future. 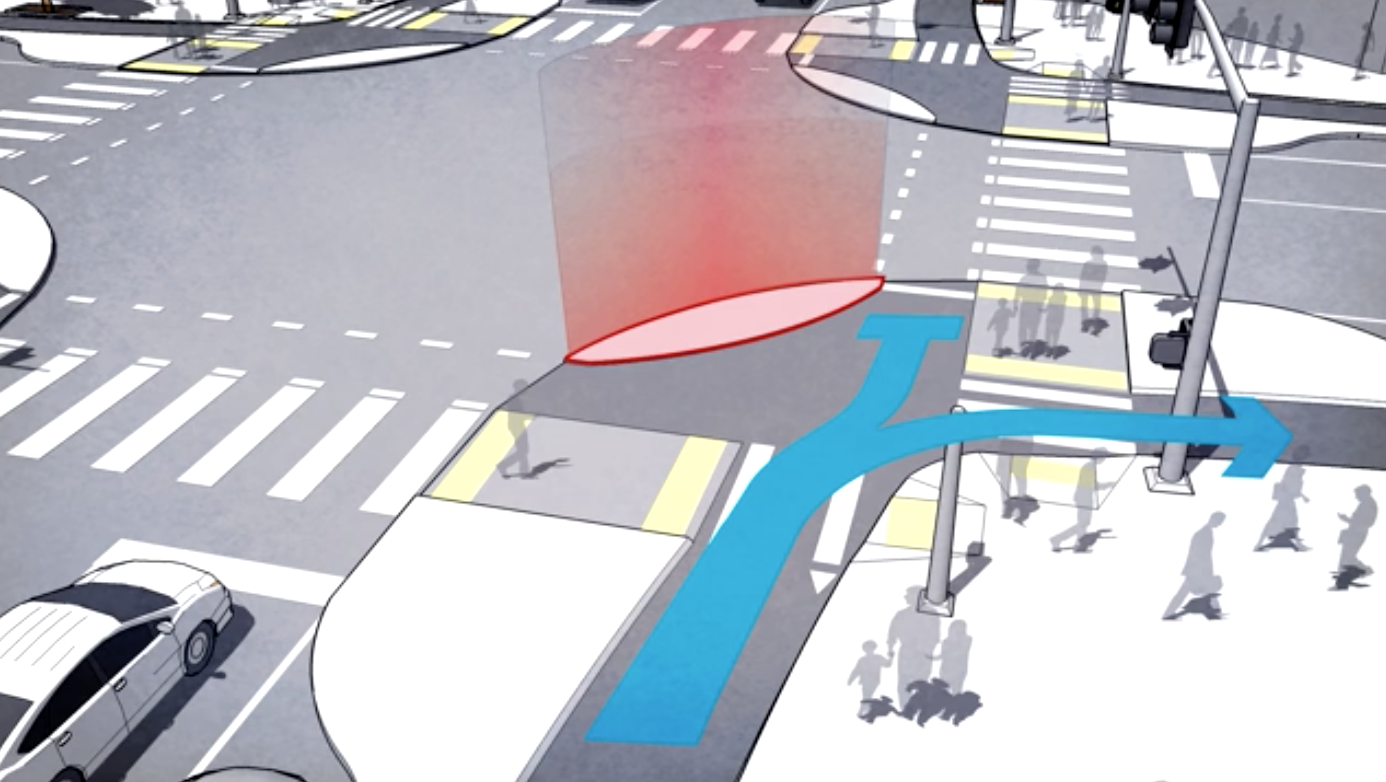 This animation from a video by Nick Falbo of Alta Planning+Design shows how a protected intersection works. Watch the video is here.

While these measures from Portland are certainly useful here in Minneapolis, traffic signals are better at guiding than protecting. Intersections need both qualities in order to be safe for all road users. The most important lesson to learn from Portland might simply be: keep trying nontraditional solutions and collecting evidence they work. Designing multimodal streets has been complicated by outdated street design guidelines focused on motor vehicle flow [http://en.wikipedia.org/wiki/Level_of_service]. The city, county and state have come out in support of the updated treatments for designing multimodal streets proposed in NACTO’s Urban Street Design Guide. Minneapolis, like Portland has big plans, include goals to increase mode share for cycling to 15 percent by 2025, build a 30-mile network of protected bikeways and reduce the number of traffic fatalities among cyclists by half. To reach these goals, we need to keep advocating for safer intersections along our network of protected bikeways, because a network is only as strong as its weakest link.