Oak St Protected Bike Lane: The Ribbon has been Cut! 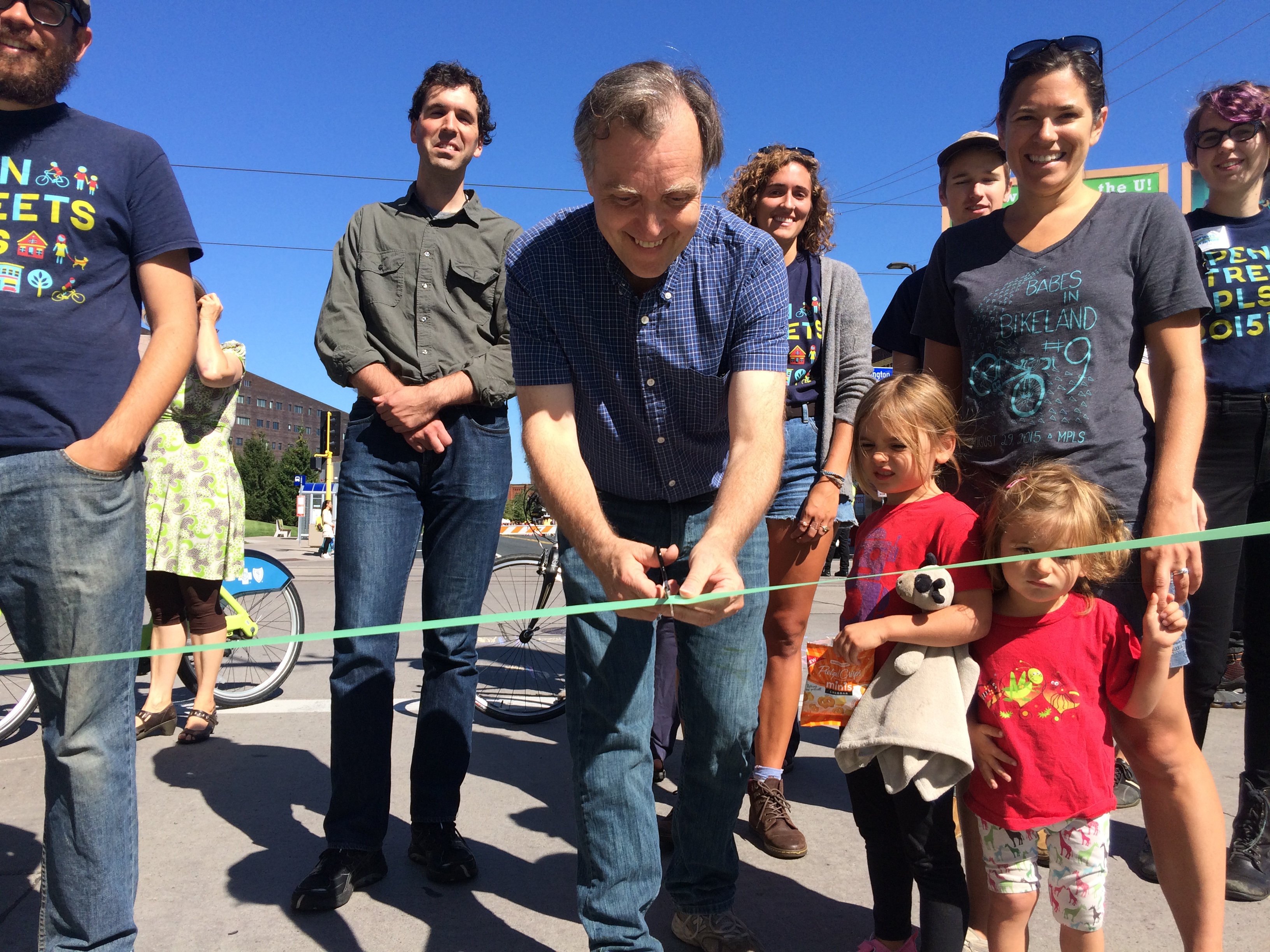 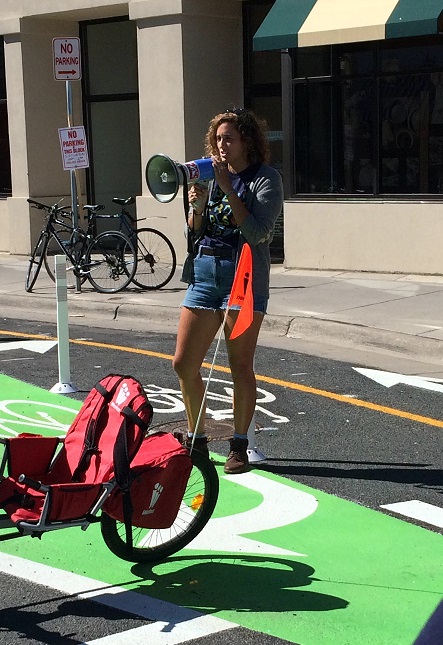 We had a crowd on hand to celebrate the new bike lane with us.

Before the ribbon was cut, Council Member Gordon, U of M student Brigid McBride, and our Executive Director Ethan Fawley spoke about the bikeway.

We need to keep up with need to leave cars behind - CM Gordon #OpenStreetsMPLS pic.twitter.com/OCoQ8FrATP

We're using bikeways every day, every month of the year! -U of M Student #OpenStreetsMPLS pic.twitter.com/FhIChIkygd 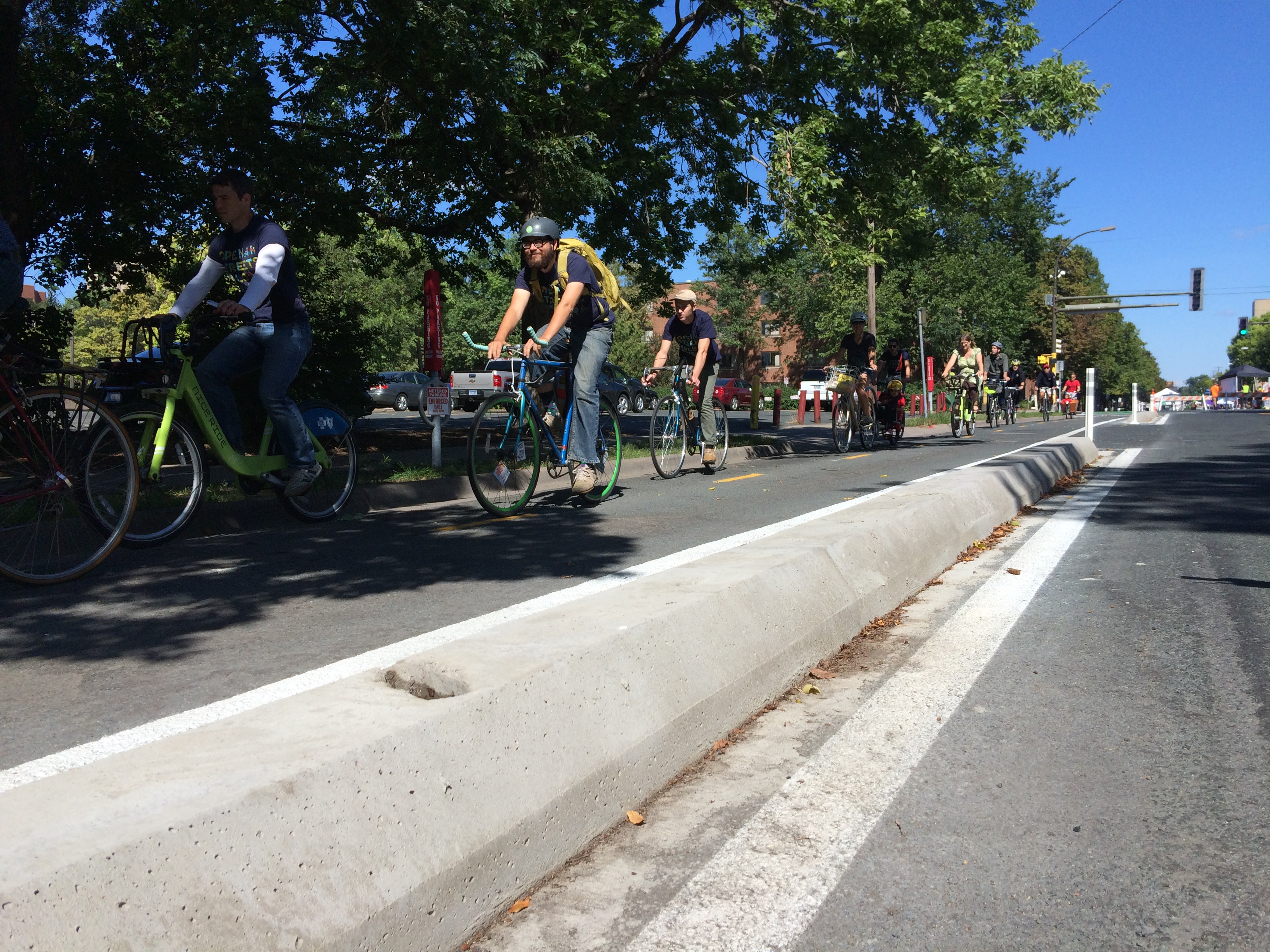 While the celebration was fun, we're really excited about the feedback we've already received from those who are using the new protected bike lane. While tabling at Open Streets, a lot of students expressed their happiness about having a safe route connecting the Washington Avenue Transit Mall to Stadium Village and East River Road.

Students feel that the new protected bikelane has given them access to transportation around campus and the city in a whole new way.

U of M student Maxyne Friesen says: "I like it because it makes me feel safer on the road, which makes me want to bike more!" Dan Lubben, student, says: "I like the new Oak Street bike lane because it allows me to get between the river and the green line safely and quickly in either direction, without having to worry about drivers not noticing me. I like that both lanes are next to each-other, I think it makes pedestrians more careful of crossing the path and other bicyclists more focused on having good control of their bikes."

Another student, Jordan Pinneke, says: "As a returning resident of Superblock and a student at the University, it had always been difficult trying to get from Dinkytown back home or from my hall to south Minneapolis owithout wincing at every car that passed me. Now, being able to connect to the river without biking with other cars makes me feel safe and separated from traffic. It's also a great feeling knowing that the University is taking an interest in making our campus more bike-friendly while having less of an impact on the environment." 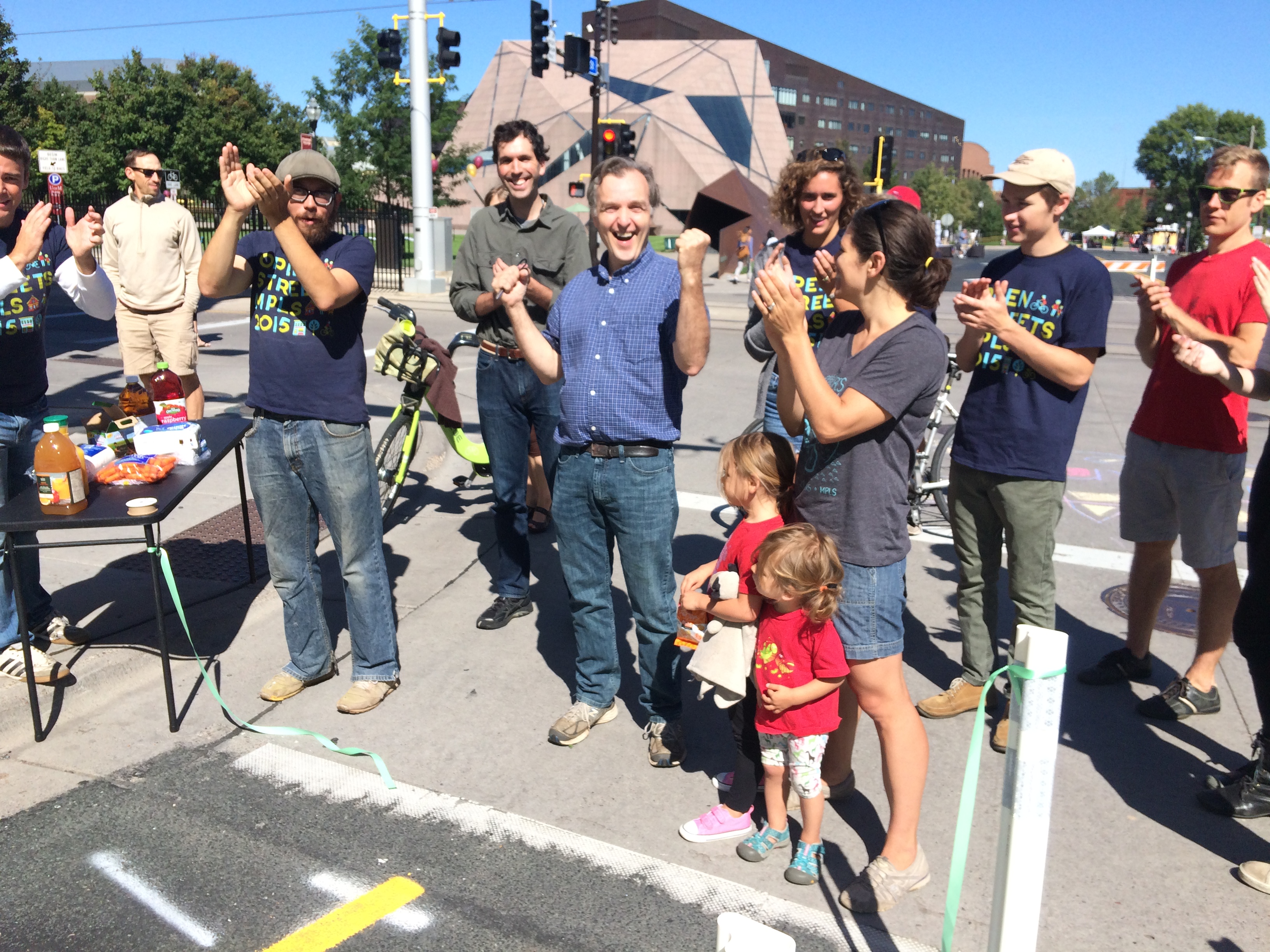 Frequent Minneapolis biker, David Wee, says: "I like the Oak Street protected bikeway because it provides a SAFE and DIRECT route between the East River Parkway and Stadium Village by the U of MN campus, in both directions!  It is not only a perfect guide for bikers, showing them where to ride, but also a highly visible bike path for motor vehicles to remind them to pay attention to bicycle traffic on Oak Street and in the neighborhood."

And students aren't the only people using the new protected bike lane. Our Development and Communications Coordinator, Alex Tsatsoulis, uses the bikeway to take his nine month-old son to daycare. "Biking him to daycare has been an amazing opportunity for me to spend more time with him. We can play games while we ride, I can sing to him, and he can “talk” to me and play and look at the world outside of the bike." You can read more about Alex's biking experience here.

You Can Get Involved in These Projects!

Anyone has the opportunity to get involved in protected bikeway projects by signing up to join one of Bikeways for Everyone's workgroups. It's very easy: you meet with a group once per month for about two hours to discuss protected bikeways in the area you care about. You help us set our priorities and decide which projects we'll advocate for. You can find more information here.

At Open Streets Minneapolis, we spoke to City Council Member Cam Gordon and Bicycle Planner Simon Blenski about Oak Street, why they support it, and the challenges that it faced. Simon also spoke about the potential for putting a two-way protected bike lane on University Avenue that would connect the protected bike lane on Oak Street with the planned bikeways on 15th & 10th Avenues.