Here at Our Streets Minneapolis, we continue to advocate for a city where biking, walking, and rolling is easy and comfortable for everyone.

We thought this was a good time for an update on what’s happening with our advocacy work at Our Streets Minneapolis. We’d love for you to get involved with whatever is most motivating to you, so here are some options: 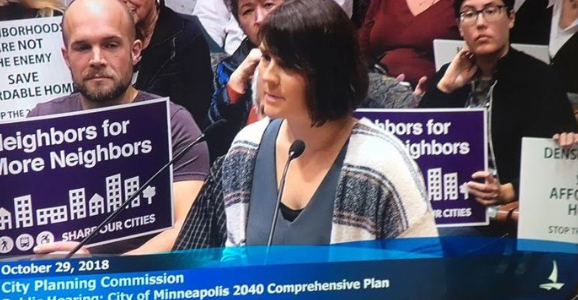 Every city in our region is responsible for developing a comprehensive plan, and Minneapolis has been pretty serious about developing a strong plan that will guide the way we grow as a city. This will impact the way folks get around our city in the ways that work best for them. We’ve been working on engaging residents throughout the year and now the City Council in getting close to approving a final plan. Most recently, our board member Sarah Tschida gave comments in general support of Minneapolis 2040 to the City Planning Commission. She thanked them for including language about winter sidewalks and asked them to go further with including language about greenways and bikeway, which they included in an amendment later that evening. Staff member Emily Wade renewed our support for the plan and desire for language about greenways and bikeways at the City Council hearing. Go team! 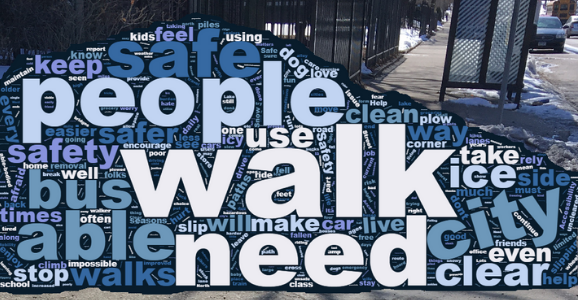 In 2017, we expanded our mission to include walking and rolling and changed our name to Our Streets Minneapolis (formerly the Minneapolis Bicycle Coalition). We heard from a lot of you that one of the barriers to walking or rolling in Minneapolis are snowy and icy sidewalks during the winter season. We are advancing a campaign to get snow and ice cleared from sidewalks promptly, and we are advocating for a few specific things:

We’ve gained a lot of momentum with this campaign after hearing from folks at Open Streets Minneapolis and other events across the city. The word cloud pictured above features a summary of the comments we received from those we talked to in the past year. We’ve been organizing people to contact their council members and we monitored a 90 minute discussion of winter sidewalk conditions at the city’s Transportation and Public Works Committee. Most recently, our board member Scott Engel was featured in a Star Tribune article. This is big progress, and doesn’t happen without folks speaking up. 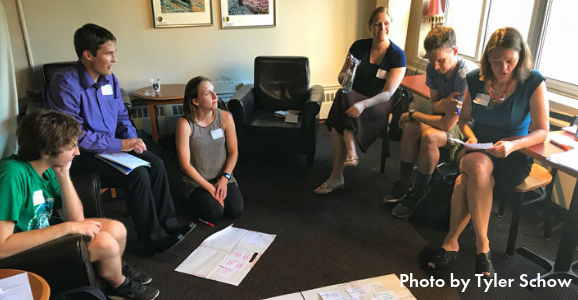 Our volunteers do a ton of great work through our Work Groups. We currently have two active work groups:

Pedestrian Work Group
This group advocates for specific issues that impact those of us who walk or use a mobility device to get around. We meet on the 3rd Monday of the month at the Minneapolis Central Library. Come join us and learn more about how you can advocate for what you believe in and the best ways for you to get around.

Downtown Bikeways Work Group
This work group is trying to make it easier for people on bikes to ride around downtown Minneapolis. Right now the group is focused on two corridors: a north/south route for getting in and out of downtown, and an east/west route for getting across downtown. The group meets on the first Monday of the month, usually at the Dunn Brothers in Loring Park. Catch up with the Downtown Bikeway Work Group's work by reading their latest blog post.

Contact Cindy if you’d like to get more involved as a volunteer with one of our work groups.