The other day I reported about the lack of a detour at the Stinson corner on the Diagonal Trail. I was excited to see on Friday swift work was being done to improve the safety at this construction zone.

But when I rode the detour I wondered how successful the detour actually was.  Particularly because of the 90 degree angle required to enter and exit on/off the trail and on/off the detour, 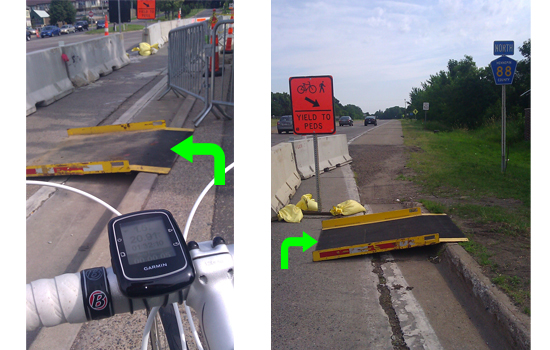 and most specifically, because of this: 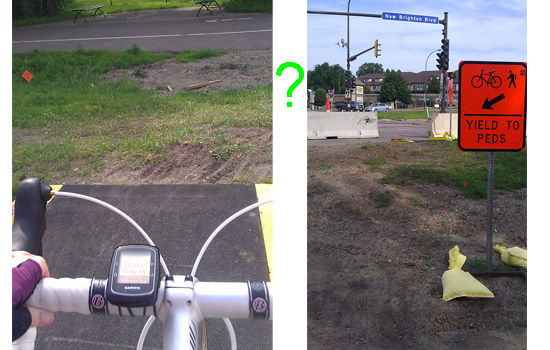 What is this?  Is this better than the rutted self-made detour cyclists had made?  I don't think so.  What the heck do I do with this?  How do I get down and up without getting off my bike?  What crossed my mind is 1.  Did people who bicycle make this detour?  Doesn't seem like it.  2.  What have I done?  I am seeing people opting not to go through this mess and use the rutted self-made detour still ~ and my concerns for that path of travel still remain.  Maybe I shouldn't have said anything.  Boo. 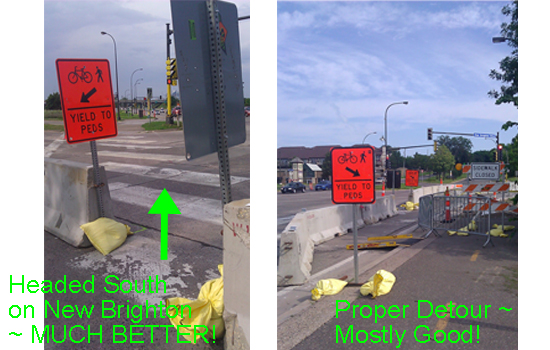 But then I thought about it some more.

Yes, this entrance/exit point is completely worse than the self-made detour was.  BUT overall this detour is MUCH safer than than previous option.  My main concerns have been addressed.

At once I felt THE POWER OF ONE - for bad and for good.  For bad - I contributed to taking something bad and sort of making it worse.  That's not what I wanted.  BUT for good - look what I, as one individual, had the power to do.  I spoke up, my voice was heard, and what I personally feel is a MUCH safer intersection for those in my community, as well as myself, was put into place (quickly).  Bicyclists and pedestrians are respected here.  And really, at the end of the day I am mostly happy with that.

It's Saturday, so I can't tell the City how I feel - but I wanted you to know.  I'll be sure to follow up with the City, but in the meantime I didn't want people automatically going to the wrong mental space on this detour.  Let's look at this situation as one of respect for bicylists and pedestrians.

And think about it, this was just little ol' me saying something.  Just think what a greater voice with more people can do for positive change in our City.  You, me, US ~ WE - all behind the singular voice of the MINNEAPOLIS BICYCLE COALITION.  We can make a difference when it comes to things longer lasting than a bicycle detour.  When we join together with a constructive voice, a positive voice, and citing the facts calmly and clearly ~ WE can get things done.  After all, this isn't just about me, it's about all of us.